I tend to avoid writing about out-of-town dining, mostly because I’m not that interested myself in reading about restaurants I’ll never visit. If there’s an article in Food & Wine about a charming little cafe on the shores of a bucolic lake in Patagonia, I’m already turning the pages looking for the next article.

New York City is different. A lot of you, like me, go to New York a couple times a year for business or personal reasons. Some of you even go there on religious pilgrimages — although that will subside after Springsteen closes his one-man show.

Anyway, people go to New York often enough, and the city is overwhelming enough, that I thought it might be useful to talk about where my family and I ate recently during a long weekend in NYC. I also note some other ideas in each entry that will scratch a similar itch, if you’re interested.

At the start, I have to acknowledge my daughter Emma, who lives in Chelsea and, for good or ill, inherited my slightly pathological obsession with food. Emma did most of the research, fussed with Resy and OpenTable, and schlepped to Brooklyn with me at 5 pm to get a seat at the bar at Lilia. She’s also the only person in the world who’s read every draft blog post before I publish to tell me what it needs and critique the jokes. This post — and the blog itself — wouldn’t be possible without her. 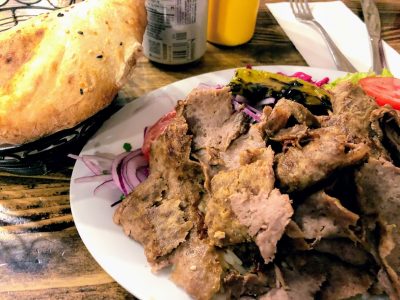 I almost didn’t include this plate of gyros because it was just a quick pitstop on the way from the train station to my hotel. But that’s the point. A random Turkish joint in Manhattan that I just happened to stumble into had better gyros than any I’ve had in DC. Sometimes the grass really is greener. 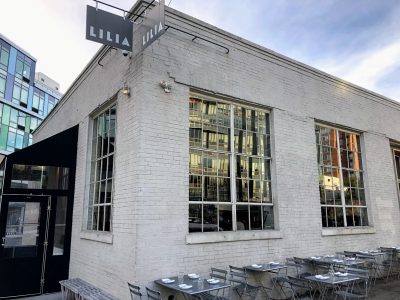 Chef Missy Robbins’ Italian mecca for foodies. The pastas will melt your heart. Very tough reservation to get, so either plan ahead or do what Emma and I did and be there when it opens at 5:30 and grab a seat at the bar. For those who think Brooklyn is too much of a schlep, it’s literally one stop from Manhattan on the L subway line (Bedford stop). 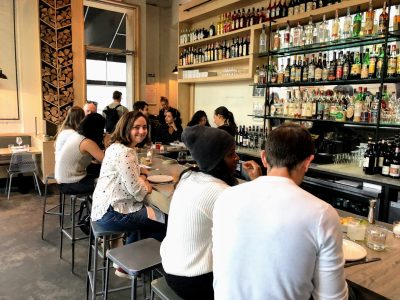 Emma at the bar. 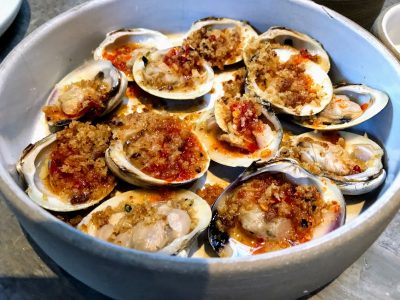 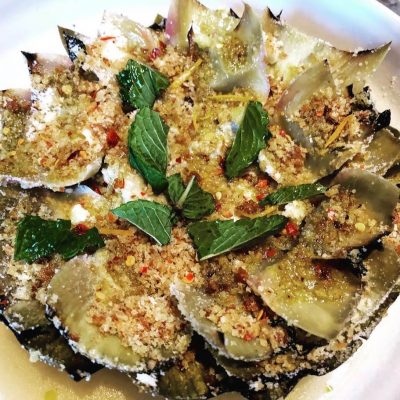 Whole artichoke with garlic, mint, Parmigiano and breadcrumbs. Someone in the kitchen has some serious knife skills. Also note the breadcrumb motif again, which does make just about anything better. 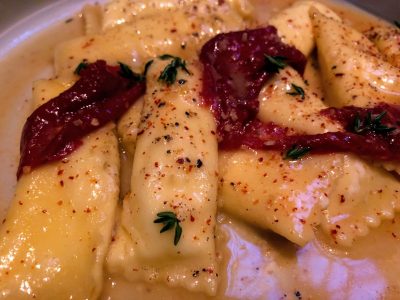 Sheeps milk cheese filled agnolotti with saffron, dried tomato and honey. One of Lilia’s iconic dishes and for good reason. The thinnest, most delicate pasta you can imagine perfectly balanced with just the right amount of filling and a delicate saffron sauce. 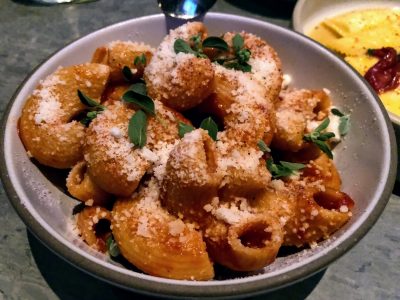 Rigatoni Diavola with San Marzano tomatoes, chiles, oregano and Pecorino. The toothsome rigatoni is the star of this simple, hearty dish.

Jean-Georges Vongerichten’s third restaurant connected to the ABC Carpet & Home store (along with ABC Kitchen and abcV). The shareable plates of Latin-influenced dishes are fresh, vibrant and well-conceived. Not quite as cleanse-friendly as abcV, the austere vegan spot next door, but when you combine excellent guac/chips along with some pretty healthful choices, you can choose Cocina guilt-free. 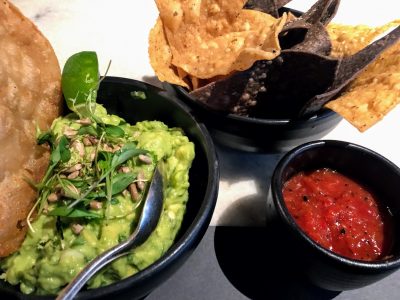 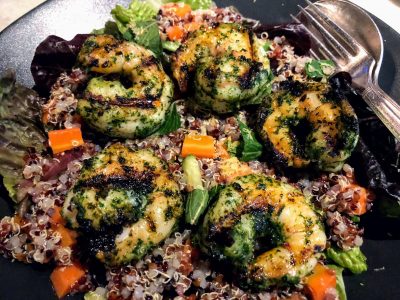 A small Korean eatery with both traditional and modern touches. Everything is good, including bulgogi beef sliders, Korean chicken wings, soy-poached black cod, and bacon-kimchi fried rice. Unfortunately it was too dark inside for food pics, so I just have the exterior. 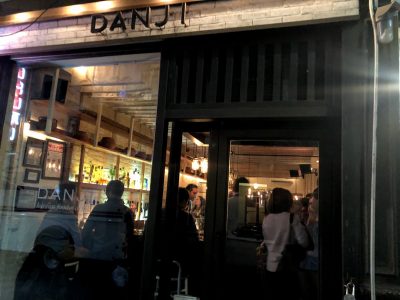 The place in New York that feeds not only my stomach but my soul. Maybe it’s because my dad owned a deli in Minneapolis called Deli-ca-Chessen’s (for those who didn’t know). Or maybe it’s some deeper Jewish genetic code that resonates whenever it comes in contact with half-sours and a Dr. Brown’s. It’s certainly because of the pastrami. I’ve never gone to Katz’s and not ordered a simple pastrami on rye. Sometimes, if I’m feeling frivolous, I’ll throw in a cup of matzo ball soup or some slaw on the side. But the pastrami is inviolate. 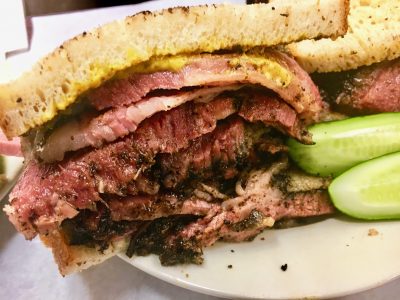 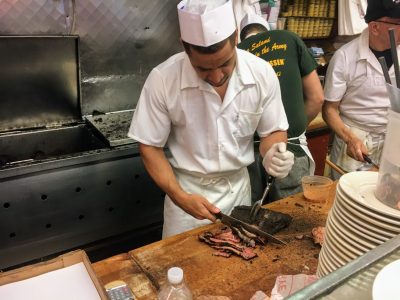 That’s how you cut pastrami. You carve it. None of that meat-slicer BS. 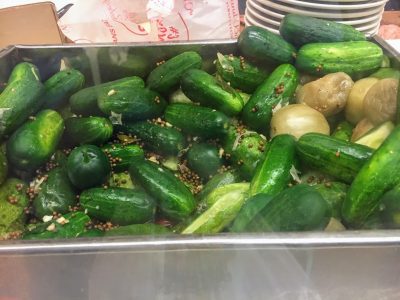 The only pool party I want to be invited to.

Terrific modern Israeli cooking from Chef Meir Adoni, incorporating influences from Morocco and Libya to Syria and Turkey. Good breads and creative, shareable dishes. What Sababa in Cleveland Park should aspire to be. 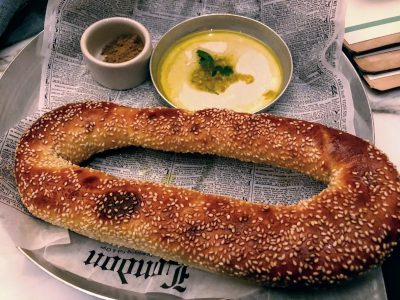 Jerusalem Sesame Bagel. Obviously more of a bread than a bagel but equally schmear-worthy. 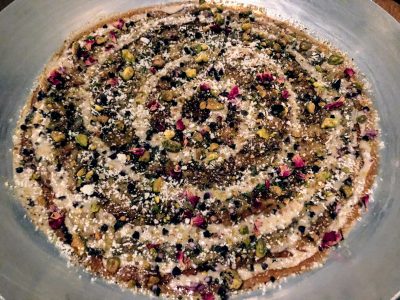 Smoked Eggplant Carpaccio, fire-roasted with feta, raw tahini, dates, pistachios and rose water. Love the sweet, smoky combination right up to the use of rose water. In general, I don’t like the taste of flowers in my food, particularly the perfume-y kind. It doesn’t ruin a delicious dish like this but it does feel like it would have been better without the dash of potpourri. 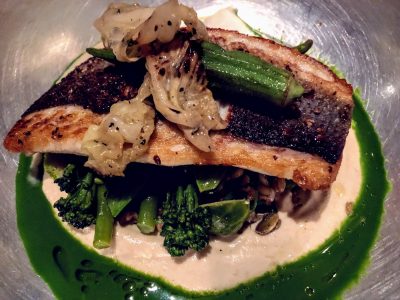 You don’t want to be challenged at brunch. You want comforting food to cozy up with, preferably involving fried dough, butter and pork products. And at least for me, half the time I actually feel more like lunch food than breakfast. Loring Place fits the bill. You can enjoy the warm embrace of a lovely morning bun, soft-scrambled eggs and thick bacon, or take the lunch path with an excellent burger or pizza. It’s a win-win. 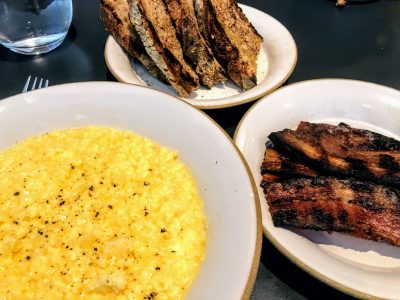 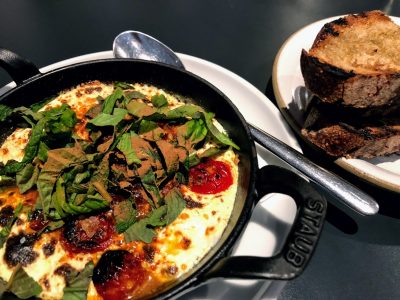 The restaurant that helped define New American cooking in the 1980s has settled into middle age as a place that no longer sets trends but mostly ignores them. And sometimes that’s just what we want — straightforward, seasonal cooking that feels authentic and grounded. The new digs that USC has occupied since 2016 feels authentic and grounded as well. The only evidence of trendiness is the no-tipping policy, which you have to keep reminding yourself of as you scan the pricey menu. 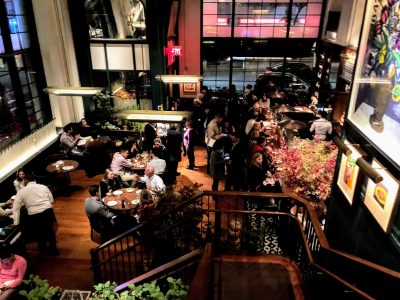 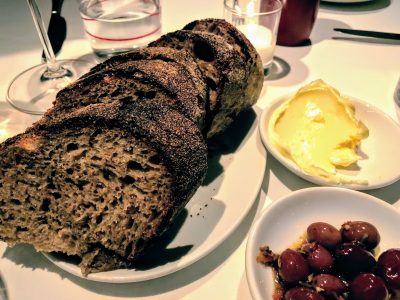 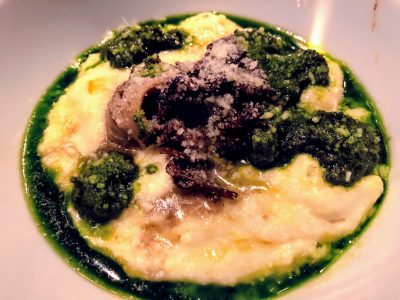 Anson Mills Polenta with Crescendo cheese, maitake mushrooms, pesto. Polenta may have its roots in peasant cooking, but this dish is as rich and decadent as foie gras. 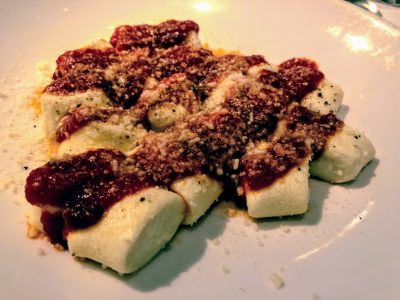 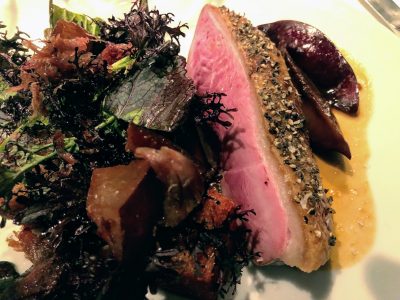 All in all, it was a great four days of eating. We did other things too. I’m pretty sure we saw a good play called Come From Away and I vaguely recall walking through the Guggenheim — although other than steps on my Fitbit, I don’t think I got anything out of the latter. The only thing memorable about the Guggenheim is that it’s a short walk across Central Park to something far more beautiful: 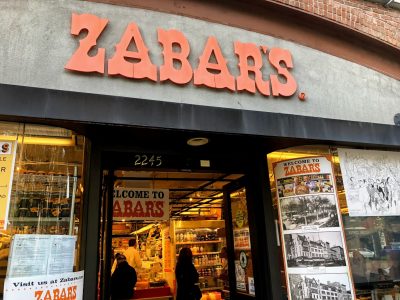 One Response to 4 Days in New York City