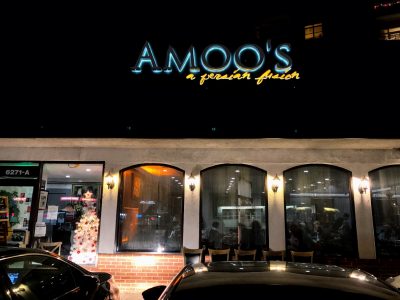 I came home from work last Thursday and suggested we drive to McLean for dinner. My kids’ first reaction was confusion. Dinner in Virginia? On a weeknight? You’d think I’d just asked them to hook up the Conestoga to set out for the Dakota Territories.

But I held firm. The Persian restaurant Amoo’s had been on my list for a while and it had just appeared on Tim Carman’s excellent list of top bargain restaurants. It’d be worth it, I promised, and off we went to McLean.

Not to wreck the suspense, but fast forward to the end of dinner. As we were leaving my daughter Maya said “You know, dad, when you really look at it Virginia is actually pretty close.” It’s at moments like that when you know you’ve done your job as a parent. I still get misty-eyed thinking about it. And not only because it’ll be easy to sell another trip across Chain Bridge but because Maya was so right about Amoo’s. We were both smitten.

As you’ll see, we didn’t order much food that night — I wasn’t planning to write and thus didn’t do my usual over-ordering — and yet the meal packed a wallop. I sometimes go for weeks without a truly memorable bite, even eating at good restaurants. At Amoo’s I had several memorable bites in only a handful of dishes. I don’t know what “Breaking News” CNN was running at the bottom of the screen on Thursday night, but it couldn’t have been more deserving than that. 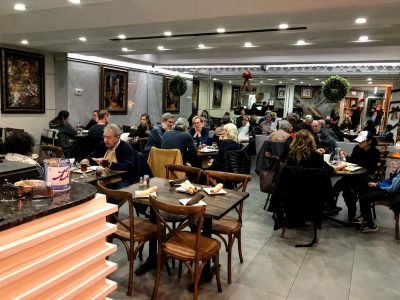 Chef and co-owner Sebastian Oveysi is a constant presence in the dining room, chatting up returning guests and welcoming first-timers. His food has a backstory, often a personal one, that roots it and gives it meaning (okay, there are a few deracinated “fusion” options on the menu like the chimichurri lamb and the tandoori chicken kabob, but those are outliers). This is cooking that has evolved over time — both in ingredients and technique — and gotten better through trial-and-error. It’s why chef specials so often disappoint compared to regular menu items. Insufficient vetting.

The dining room itself is cozy and on first blush seems relatively nondescript. Then you notice a picture of the Shah hanging in a prominent place above the bar and you realize that even the decor has a point of view. 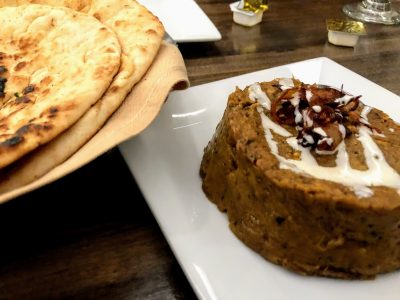 More like a warm eggplant spread than a dip, this is slightly sweet and smoky starter goes nicely with the very good pita. (Speaking of bread in Persian restaurants, why does Moby Dick have such terrible bread? They have someone who does nothing but make bread and yet it comes out as flat and tasteless as a Louis C.K. routine.) 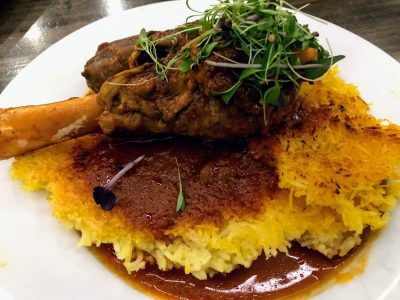 I love this dish. No, as Alvy Singer said about Annie Hall, love is too weak a word for what I feel. I luuurve this dish.

The rice alone would have been more than enough for a single dish, but then you top it with one of the house stews like this terrific lamb shank with tomato-garlic sauce and it soars to iconic status. 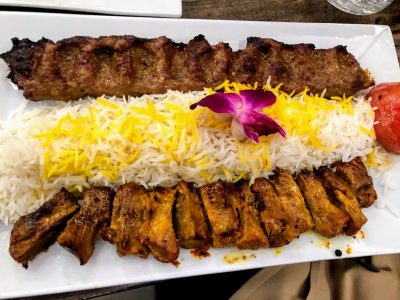 The lamb kabob is fine, although I wish is were cooked a bit closer to medium-rare than medium-well. The koobideh, though, is outstanding. I’m a sucker for koobideh and order it whenever I can. Even bad koobideh is usually pretty good. This is some of the best koobideh I’ve ever had. Partly it’s the quality of beef, which Oveysi fashions from scraps of tenderloin trimmings. 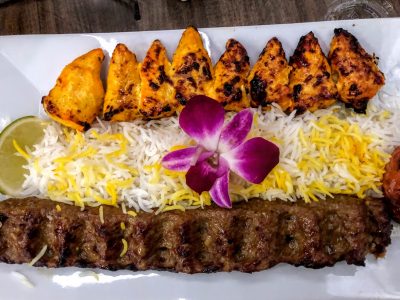 Once again the corrugated koobideh carries the plate. The chicken kabob, like the lamb, is fine but is a tad overcooked. The Cornish hen (which I’m guessing is bone-in) may be a better bet. 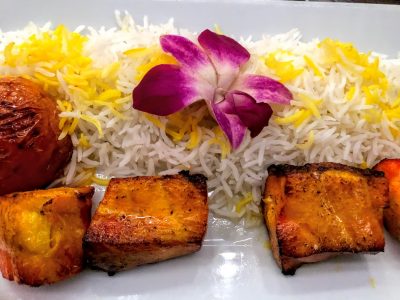 h/t to Tim Carman for this recommendation, which I probably wouldn’t have gambled on otherwise. As Carman notes, the bass is on the pricey side but completely delicious. Marinated in lime juice, saffron, garlic and olive oil, the fish chunks pop with flavor and a meltingly soft center when you bite into them. They’re the Freshen-Up gum of the fish world.

I don’t know how I can ever go back to Amoo’s and not order the tahdig, the koobideh and the sea bass. They’re all great dishes. But it’s a big menu and there’s so much left to explore. I may need to cross Chain Bridge several dozen more times to check them out. Maya, make sure the oxen team is fed and ready.

2 Responses to Virginia is for Amoo’s