I love Rose’s Luxury. It’s my favorite restaurant in DC. I’ve never once complained about the seating policy mishegoss. If people care enough about the food, they’ll do what I do and eat an early lunch on a Monday or Tuesday when Congress is out and there’s a line of thunderstorms predicted to hit Barracks Row around 3-4 pm to make any early birds think twice and then fake an injury and leave work early and head down around 4:30 to line up for the 5:30 seating. Easy peasy.

But it wouldn’t matter if I had to wait all day. Because all is forgiven once I cross that threshold and I give myself over to the perfect feng shui of the place. The tables, the decor, the hosts, the cooks banging around in the open kitchen — even the other customers — they’re all bathed in a warm and welcoming glow from the time I walk in until I step back out onto 8th Street.

And your waitstaff is simply the best. I don’t know where you get them and how you keep them so motivated. They’re hip without being hipsters. They do the little things, like quietly and efficiently topping off my water glass anytime it falls below 3/4 full, and the big things equally well. Once, when I was eating solo, I really wanted to try the $31 smoked brisket even though I knew it was designed to share. So I ordered it, figuring I could just take the leftovers home. My waiter told me he’d be glad to bring me the full order but told me I could also get an off-menu brisket sandwich that had all of the fixings for just $12. He easily could have kept his mouth shut and sold me the entree for $19 more — I would have been perfectly happy and he would have increased his tip. But he did the right thing and made a customer happy, not only in the moment — what a sandwich! — but also in the weeks and months to come as I thought about his good deed.

And while the atmosphere and service are top-notch at Rose’s, the food is even better. It’s gutsy and idiosyncratic and soulful and just plain delicious. 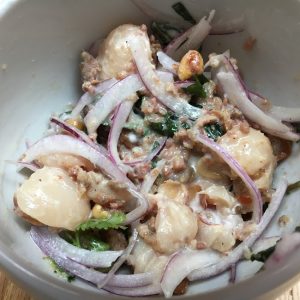 It’s an amazing blend of flavors and textures: sweet, salty, meaty, herby, crunchy, oniony, and on and on. If you had told me five years ago that lychee nuts would be part of my last meal request, I’d have said you were crazy. But there you go.

Or the Bucatini with spring Pistou, ramps, jalapeno, and blue crab. 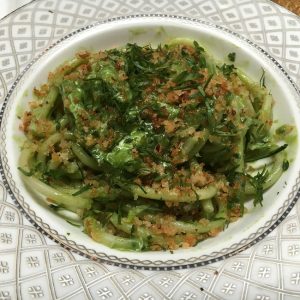 This is the kind of dish that Rose’s does best. The color, the textures, the flavors somehow meld into an unctuous whole that feels both familiar and totally new.

Or here’s that terrific smoked brisket sandwich on toasted brioche with horseradish and slaw. 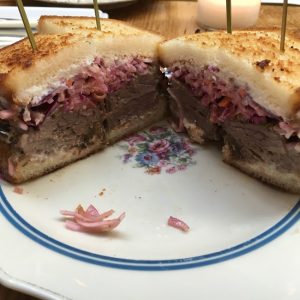 Moist, smoky, beefy, tangy — one of the best sandwiches in town.

I could go on, like the gratis potato brioche with buttermilk-whipped butter and potato skin crumbs. 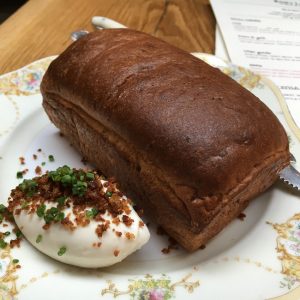 It’s what Martin’s potato rolls hope to be when they grow up.

Given my love of Rose’s — and the vagaries of waiting for unsettled weather to hit during a Congressional recess — you can imagine how excited I was when you announced you’d be opening a restaurant right next to Rose’s that…wait for it…takes reservations! Sure, Pineapple and Pearls would be pricey at $250 a head, but with drinks, tax, and tip included, it really wasn’t out of line with other top tasting menus in the area.

The only thing that gave me pause were those two ominous words: tasting menu. I don’t know that I’ve ever walked out of a tasting menu and thought, “Wow, that really lacked fussiness and pretentiousness.” Nor have I thought “I’m so happy that the kitchen spent the extra time tweezing those micro-greens and nasturtium petals on my plate. Now that the food’s cold, I don’t have to worry about burning my mouth.” In other words, tasting menus can be fun, surprising, and beautiful to behold. But they’re rarely delicious. I knew, though, that if anyone could rise above the conventions and make a tasting menu that was gutsy, flavorful and food-focused, it was you.

Things looked promising as I walked into P&P in late July. I was greeted by staffers that were as welcoming as those at Rose’s. And the room, although very different than next door, had a nice New York-vibe of its own.

Then came the savory courses (minus an oyster and a pain au lait roll, which I neglected to get pictures of): 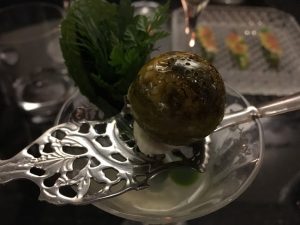 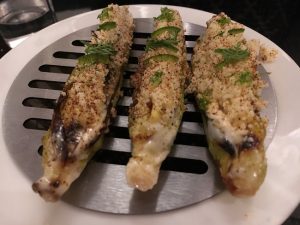 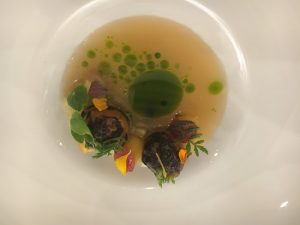 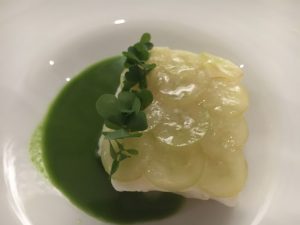 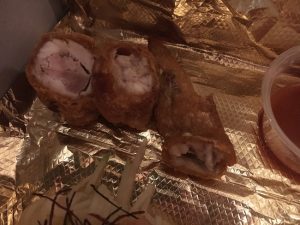 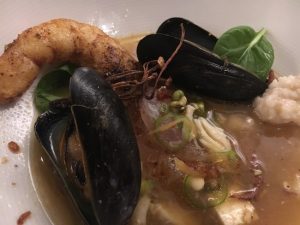 First, the good news. The fluke was lovely, the fish perfectly cooked and the flavors clean and harmonious.

The rest comes under the heading of less-good news. Most of the dishes tended towards muted shades of beige and brown and muffled flavors. Where was the puckish pow of the food at Rose’s? Where were the eye-widening moments? It felt like I was going to a Woody Allen film fest that only showed his movies from the ’90s. Not bad, but not what the maestro is capable of.

There was also one bit of cleverness in the presentation that I almost hesitate to bring up because it’s clearly designed as the showstopper and I don’t want to be a spoilsport. But I think it’s emblematic of a broader issue. When the Summer Red Curry is about to be served, the waiter lugs over a vacuum coffee maker that looks like two glass beakers stacked on top of one another. He then turns on a Bunson burner and heats broth in the lower chamber until pressure forces it into the upper chamber where it steeps with shrimp heads, coconut and herbs. Tom Sietsema gushed in his review that “the spectacle was a Thai thriller.” And it’s definitely fun. But I kept thinking, for all its entertainment value, is this the best way to make curry? And if it’s not, why do it?

Overall I left P&P somewhat disappointed but hopeful that, if others had a similar experience, maybe you’d be inspired to keep tinkering. Then a few weeks later Tom Sietsema put out his four-star rave. Among other hosannas, Sietsema declared that P&P is “re-defining what it means to be a fine-dining restaurant…Right out of the gate, their good intentions and heady results call for trumpet blasts and standing ovations.”

My first reaction was whoa, I guess ixnay on the inkering-tay. When the Post gives you four stars right out of the box you could be excused for resting on your laurels.

But then a scarier possibility occurred to me. Maybe I really don’t like tasting menus. I mean, I know I have issues with them but what if it’s deeper than that? What if tasting menus are my cilantro and I’m one of those cursed people who think cilantro tastes like soap?

In the meantime, I’ll see you back at Rose’s. I hear there’s a cold front predicted to move through DC on Monday.

2 Responses to An Open Letter to Aaron Silverman 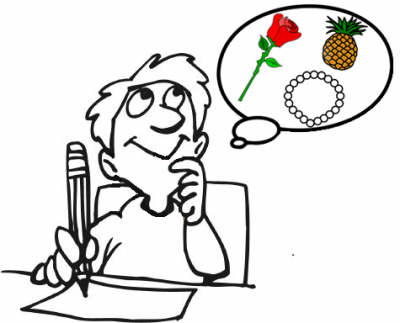