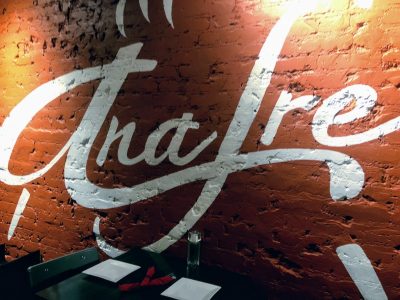 There were two big freak outs in the foodie community over the past month.

The first was AOC declaring it’s impossible to get a good bacon-egg-and-cheese sandwich in DC. Foodie Twitter got so bent out of shape that you think she’d done something completely unforgivable like wear a $232 dress during a TV appearance. But I know what she meant. She meant she can’t get a bacon-egg-and-cheese like the one she gets from her corner bodega in the Bronx. And that may be true. We can’t compete with home. But we can do different pretty well. I’d encourage her to take her next fact-finding trip to Call Your Mother Deli, where the Shyne is as good as bacon-egg-and-cheese gets: 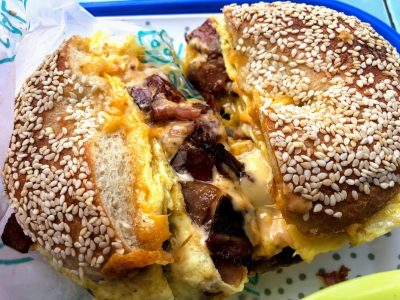 The second kerfuffle got less attention but in many ways is more significant. In early February, it was announced that a Taco Bell Cantina would be opening in the heart of Columbia Heights. For the uninitiated, a Taco Bell Cantina is basically an upscale Taco Bell with amenities like an open kitchen, cool artwork, shareable appetizers, and, most significantly, alcohol. If you’ve ever been nibbling on a Doritos Cheesy Gordita Crunch™ and thought to yourself, “You know what would make this perfect? A Twisted Mega-Margarita Freeze™!” your prayers have been answered.

Others weren’t so pleased at the prospect of Taco Bell planting a flag in a community with so many authentic options struggling to survive. Indeed, just a stone’s throw up 14th Street, a single block contains three highly-regarded, homegrown Mexican spots — Taqueria Habanero, Mezcalero, and Anafre. Alfredo Solis, chef/owner of both Mezcalero and Anafre (as well as El Sol in the District) doesn’t seem worried that his customers would be running for the border: “I don’t think it’s going to affect my business. Taco Bell is Taco Bell…It’s nothing even close to my food.”

I wanted to support Chef Solis so I went to check out Anafre, his latest offering, focusing on Mexican seafood and charcoal grilling.

Anafre’s cozy interior. They do take reservations, but if you arrive before 7 pm you shouldn’t have a problem. Either way, the best seats are the booths lining one side of the room. Just ignore the impatient woman on the left wondering when you’re going to stop taking pictures. 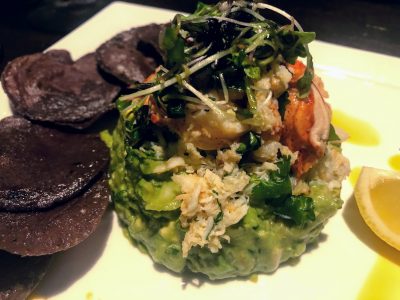 Nice guacamole with a bright kick of lime and a generous topping of crab and lobster. The blue corn chips are very good, if a bit oily. 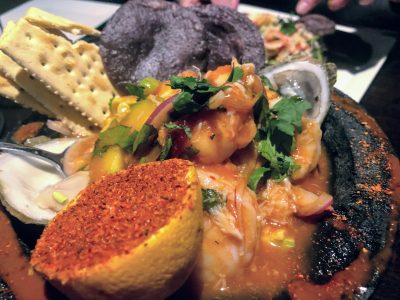 A terrible picture of a wonderful dish. Perfectly cooked seafood, avocado and onion luxuriating in a tangy tomato sauce. A must-order and a steal for $15. 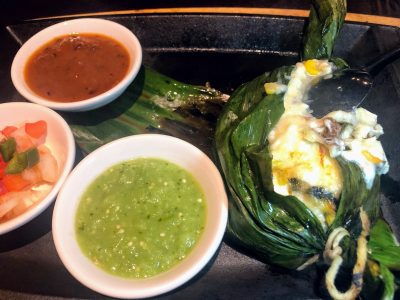 Delicious queso that stays warm and gooey in its banana leaf hot off the grill. The cheese is perfumed with huitlacoche, a fungus that grows on organic corn that sometimes goes by the name corn smut. It tastes much better than it sounds, adding a mushroomy-corn umami to everything it touches. 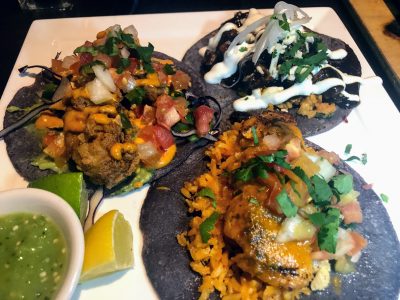 The oyster taco is excellent, definitely order one of those if you’re getting tacos. The chicken mole and salmon tacos are very good, too, and unlike some taquerias, each has its own accoutrements. 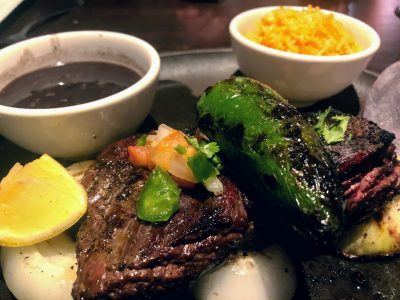 Not the highest quality steak — what do you expect for $17.95 — but still gives plenty of satisfaction with good smoke, nice crust, and a beefy chew.

(Pet peeve alert — the steak comes on a metal plate that continues to heat the steak at the table. Ask for non-metal so you’re not racing to eat the meat before it overcooks.) 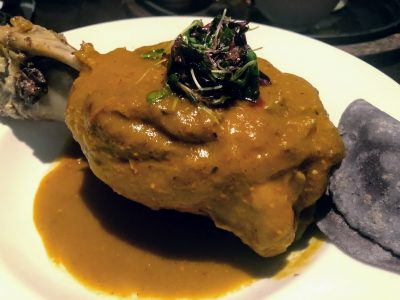 Tender pork shank with a definite kick of heat. After a while becomes a tad one-note, but an amazing value for $14 with rice, beans and tortillas. This dish plus the queso fundido would be a filling, tasty date night for $24. 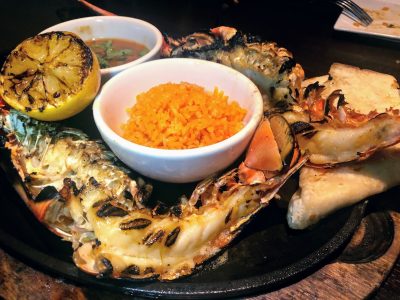 I so wanted this to be better. The grilled lobster is the priciest dish at Anfre and I fully expected it to be the highlight of my meal. Sadly, it was good, not great. Part of the problem is intrinsic to grilling lobster. There’s no room for error. A few seconds too long on the grill and the lobster will turn tough, no matter how much jalapeno butter you use. 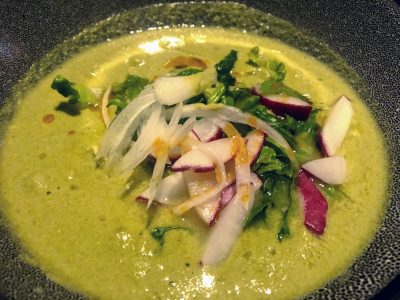 I love pozole and almost always order it when I see it on a menu. Having said that — you Curb fans know what’s coming next — I’m not wild about this tame, pureed version. 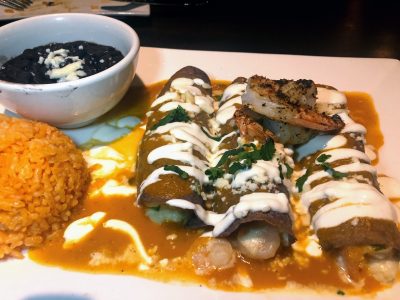 The seafood gets lost in the tortillas and surfeit of sauces. And by surfeit, I mean my calendar word-of-the-day is sometimes hard to use in a sentence.

The custard itself is a bit dense but good. That tiny pool of caramel sauce, on the other hand, just ain’t gonna cut it. It looks like the flan is bleeding out. There needs to be enough caramel sauce to dip your spoon into with each bite. Swabbing should not be required.

You can eat very well at Anafre for not much more than you’ll spend for that Crunchwrap Supreme™ Combo Meal up the street. Plus you’ll be doing something for the local community. And while I agree with Chef Solis that the food at Taco Bell is nothing like his cooking, we only eat dinner once a night. So make your choices count. I hate getting preachy, so let me leave you with the profundity of Ossie Davis and Spike Lee: