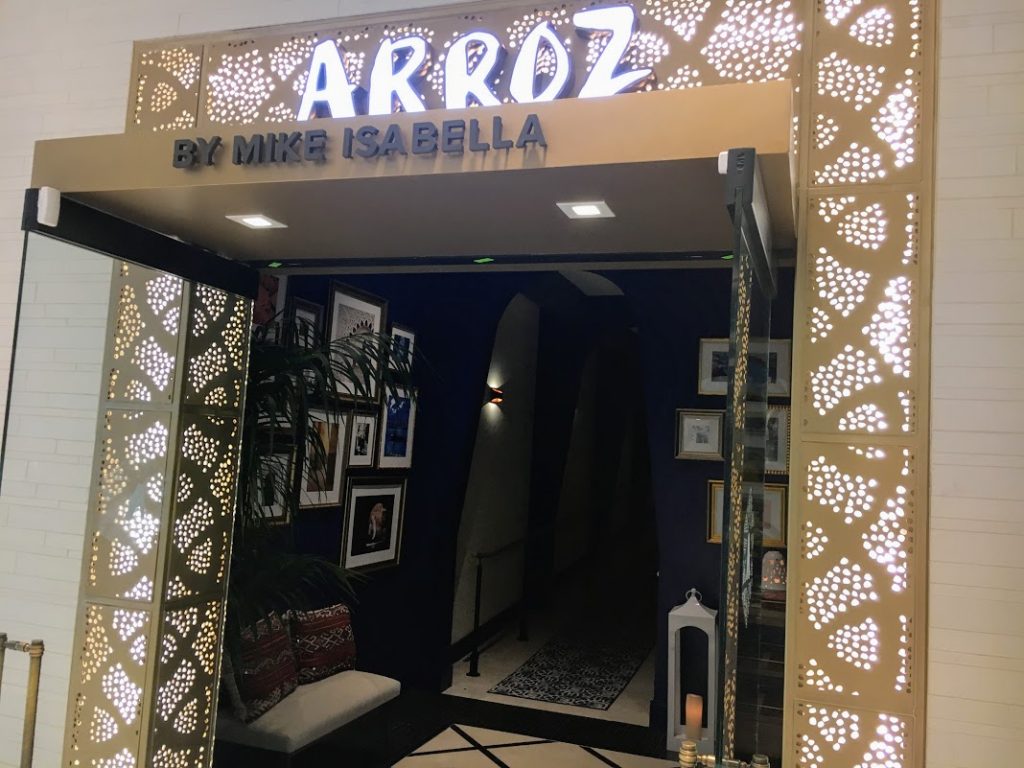 There may be no bigger story in the DC food scene over the past decade than the rise of Mike Isabella from brash Jersey bro-cook to celebrated local restaurant magnate.

After all, it was only eight short years ago, in 2009, that he first competed on Bravo’s Top Chef. At the time, Isabella was working at DC’s Zaytinya for Jose Andres and still pretty rough around the edges. On the show he often thought his dishes were superior to his fellow contestants’ and wasn’t shy about saying so. He also liked to give people a hard time — usually playfully — but sometimes his attempts at humor fell flat. Still, I rooted for him like Celtics fans rooted for Danny Ainge or Pistons fans rooted for Bill Laimbeer (kids, ask your parents). He might be chippy and cocky but he was chippy and cocky for us, Team DC. Despite my best efforts, however, Isabella placed 7th, well back in the pack.

Most 7th-place finishers on Top Chef disappear and are never heard from again. Not Isabella. He came back two years later in Top Chef All-Stars, ostensibly a tougher group of competitors composed of the best non-winning chefs from previous seasons. This time was different. Isabella placed second to Richard Blais and a lot of people — including Isabella — thought he should have won. But the biggest change wasn’t where Isabella finished but how he carried himself. He started showing his vulnerability and connecting with both his Italian roots and the people around him. Whether it was tearing up when discussing his Grandma’s gnocchi with pork shoulder or channeling Italian comfort food in the finals (braised pork with his now-famous pepperoni sauce), Isabella cooked from the heart and flipped the script on his bad-boy image. (If you want to get cynical, it could be that Isabella hadn’t really changed at all but that the show producers decided to make Isabella’s nemesis, Marcel Vigneron, the villain of the All-Stars cast, which gave Isabella the role of lovable galoot from Jersey.)

Isabella opened his first restaurant, Graffiato in Penn Quarter, shortly after his All-Stars appearance in 2011. In the six years since, he’s opened restaurants inspired by Greece (Kapnos, Kapnos Taverna and Kapnos Kouzina), Italy (G by Mike Isabella), France (Requin), Mexico (Pepita), Japan (Yona) and now, the subject of this post, Spain, Morocco and Portugal (Arroz). And that’s not counting Kapnos outposts at Reagan-National Airport and Nats Park or the massive 41,000 square-foot food court Isabella is opening later this year in Tyson’s Galleria.

But the most remarkable thing isn’t just the sheer number of restaurants he’s opened or that he’s never had one close (leaving aside Bandolero, the now-shuttered Mexican restaurant in Georgetown that Isabella helped open in 2012 but didn’t own or control and left in 2013). The more remarkable thing is that Isabella has managed to maintain the quality and consistency of his growing empire even as it continues to expand. I’ve tried to crack the code on his success and here’s what I’ve come up with:

With that much-too-long intro, let’s have dinner at Arroz by Mike Isabella. 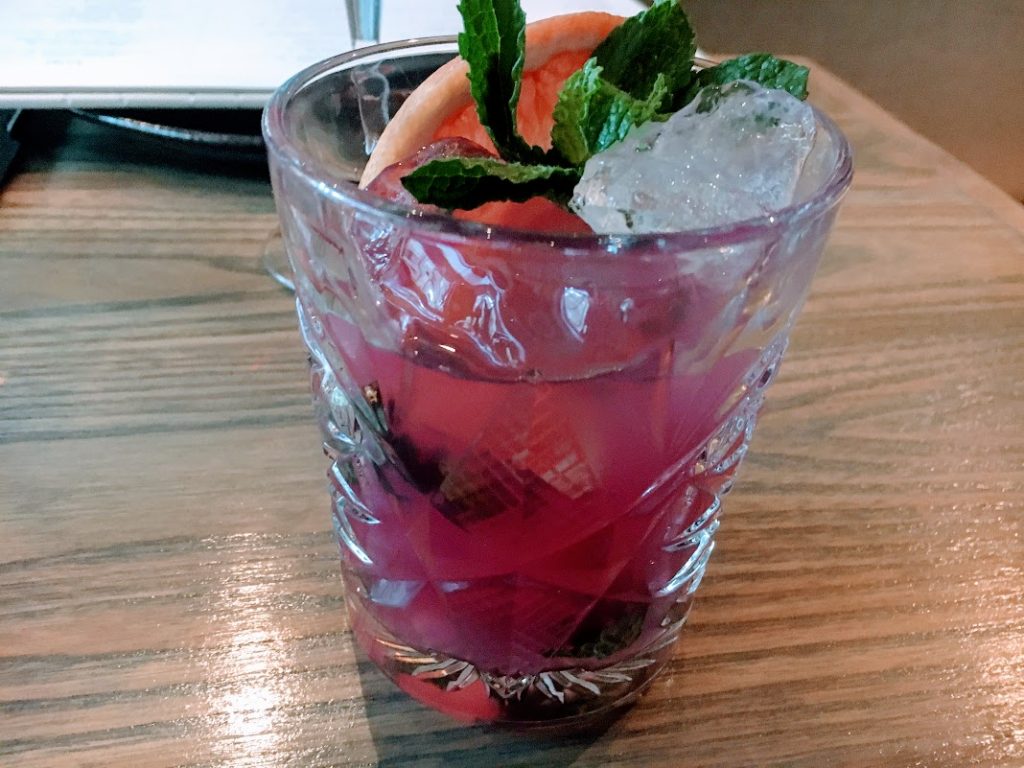 I’m not a big drinker so I don’t usually mention it in my posts, but man is this good. Refreshing and not too sweet, it goes down (way too) easily. You can get it by the glass ($10) or the carafe ($40). 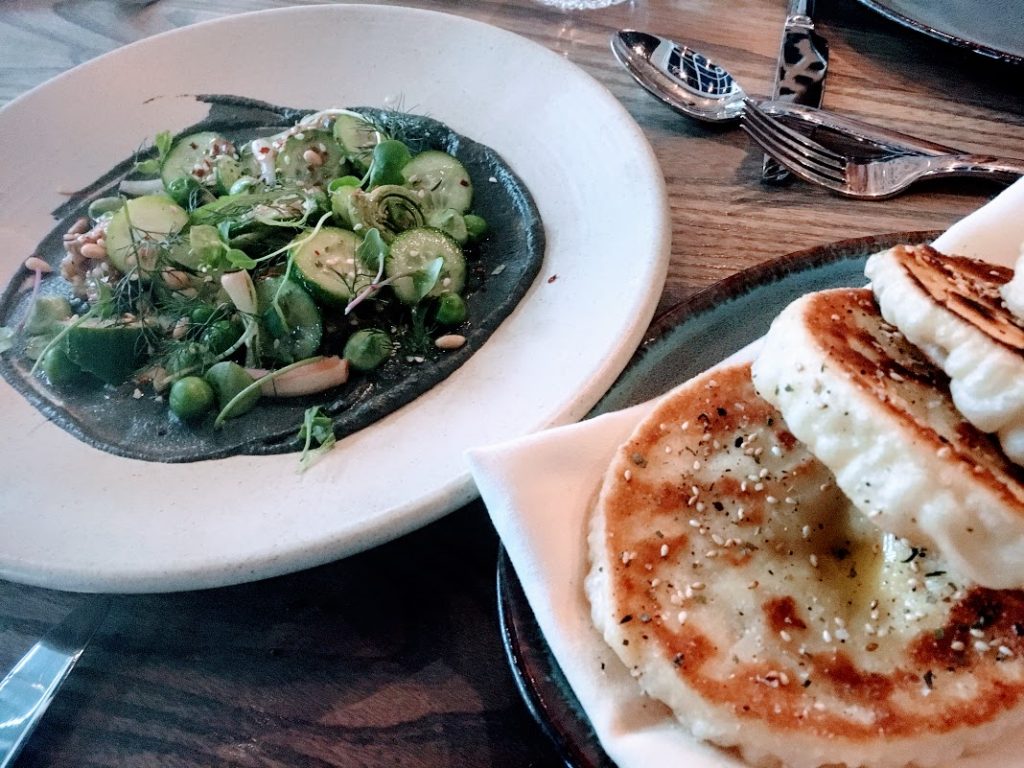 Takes the basic flavor profile of baba ganoush and ramps it up several levels. Be sure to ask your waitperson to bring a separate piece of the warm flatbread for everyone at your table. Thank me later when you don’t come to fisticuffs. 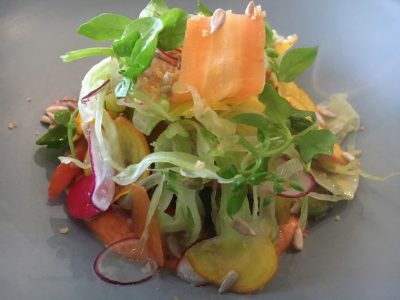 So light and fresh it almost feels more like a palate cleanser than a separate course. At least that’s what I told my table mates so I could order an extra dish. 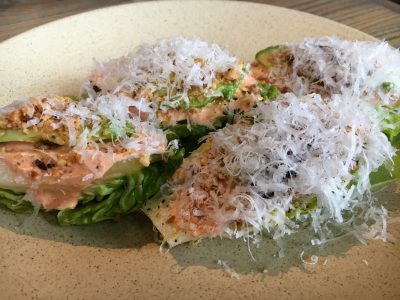 On the other end of the salad spectrum is this offering, which features a base of avocado puree topped by baby lettuces holding marinated avocados, a shower of manchego cheese and a dressing that tastes like a spicy Thousand Island. This dish violates two of my cardinal rules — diners shall not be forced to make their own salads, and restaurants shall not put anything on diners’ plates that can’t be eaten (here, the lettuce cores). But these mini-Louie salads are so carefully constructed to ensure the right ratio of ingredients in each bite that I’ll let this one go. 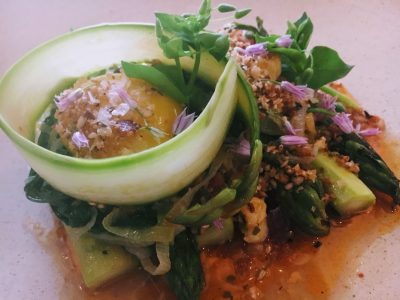 Grilled asparagus with some kind of soft-cooked egg is on so many menus these days it could be the new cauliflower/Brussels sprouts/kale. But this version is more interesting than most, with smokiness from the asparagus, chorizo, and san simon cheese combining with the bacon-and-egginess of the pork and egg yolk. 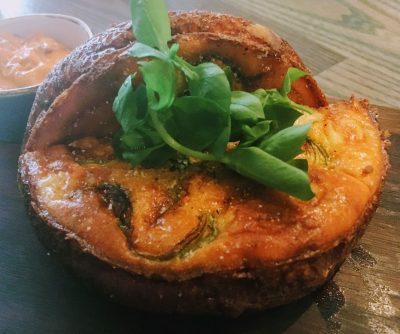 The quotation marks around “tortilla” are an indication not to expect the traditional Spanish tapas bar version, a dense potato and egg dish that resembles an Italian frittata. This is much better. Chef Rafidi confits the potatoes instead of sauteeing them and then adds Spanish goat cheese and binds it all together with egg custard. The result is a tortilla that is crisp on the outside and softly luscious on the inside. 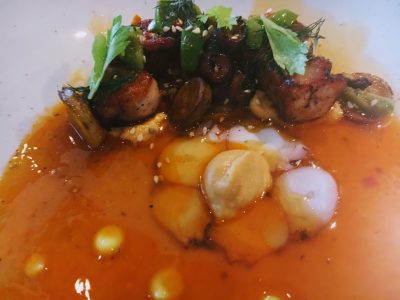 A great dish, both for the perfectly cooked octopus and for the beautiful harissa bouillon that’s made with lobster stock. My table ordered more of the flatbread from the eggplant dip to soak up every last drop. 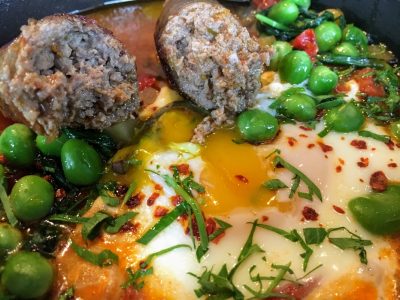 House-made merguez sausage served with yet another soft-cooked egg and a gaggle of spring vegetables, including peas, leeks and even a lima bean or two. This was good but not much more than the sum of its parts. Still, if you cut up the sausage and let it soak up the sauce and the egg, the parts are pretty tasty. 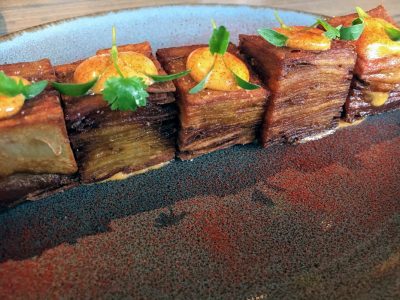 This might be the dish I’ve fixated on more than any other in the days since my visit. Traditional patatas bravas is not a bad dish, usually consisting of fried potato chunks topped with a spicy tomato sauce or aioli. Chef Rafidi takes that simple concept and elevates it into something astonishing. These square potato towers are constructed with something like 18 wafer-thin layers of potatoes that are cut perfectly and somehow hold together during some magical cooking process that leaves them perfectly crisp on the outside, tender on the inside, and nicely salty throughout. I have no idea how they do it. My current hypothesis is that they somehow pre-cut them into squares, stick a toothpick in the center and deep-fry them — and the hole left when they pull the toothpick out is cleverly covered by the aioli. But that could be completely wrong. My other hypothesis is Keebler elves. 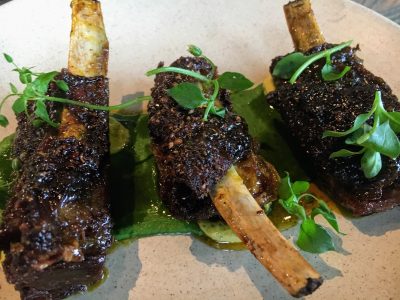 These are some terrific lamb ribs. Crisp and well-rendered meat with a slightly sweet glaze and spring onion tahini for freshness. I actually prefer them to the lamb ribs at Tail Up Goat. They are less fatty and more savory — even though rib-for-rib they are pricier at $16 for an order of three. 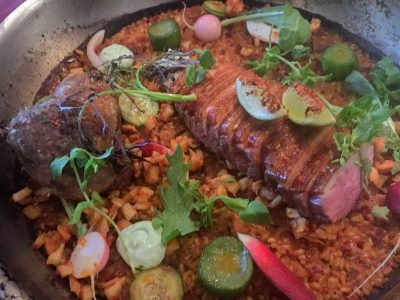 Don’t call it paella, even though that’s the best way to explain it. Unlike paella, the ingredients are prepared separately and combined for serving. There’s no other way you’d get a duck breast cooked to a perfect medium rare, a confit leg crisp on the outsoide and burnt cucumbers retaining their crunch. The best part is the cooking process results in a nice crust on the bottom of the pan, which you can scrape out with a wooden paddle. 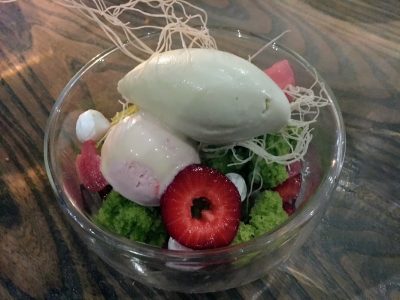 There’s always room for ice cream, especially when it’s as creamy and flavorful as this. 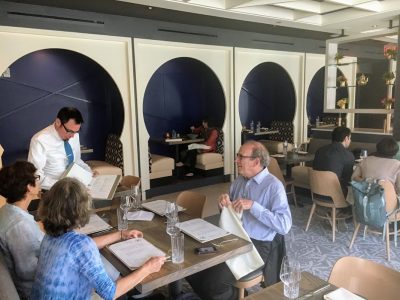 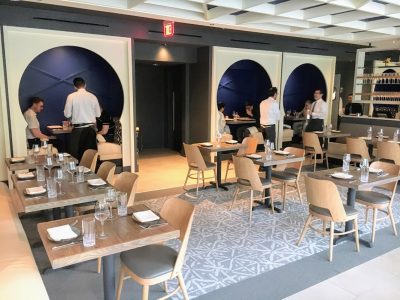 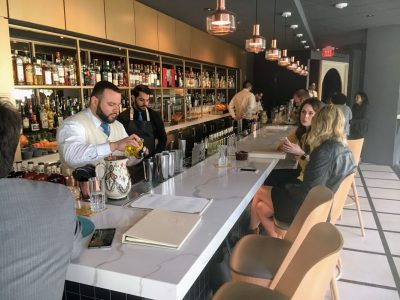 If Arroz has a weak spot, for me it’d be the decor. It feels a bit generic and functional. Other than the keyhole-shaped booths, there’s little in the main dining room that provides any real sense of place. If it wasn’t actually off the lobby of a Marriott, that’s how you’d describe it. Don’t get me wrong. I’m not looking for restaurants to be like Le Diplomate and meticulously re-create a movie-set version of themselves. I’m just looking for some feeling that you’re dining somewhere special. Arroz isn’t the only restaurant with terrific food that has that issue. Convivial does too (and they seem to be doing fine, so what do I know).

Anyway, the bottom line here is Mike Isabella has opened another winner. Just about everything I’ve eaten at Arroz has been well-conceived, well-executed and delicious. At some point, Isabella won’t be able to keep up the pace and will need to slow down or risk violating some of the rules that got him to where he is. But he’s not there yet and we are all the beneficiaries.