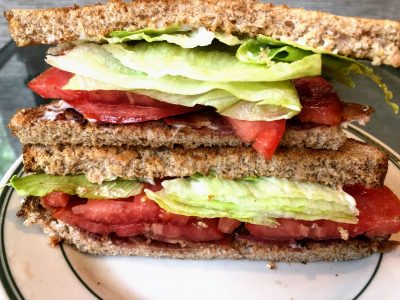 Late Summer BLT (homemade, but if you stop by I’ll make you one)

It’s late August and that means it’s time for those familiar signs of summer’s end: good tomatoes, county fairs, and outraged Facebook posts about the earliness of the Halloween candy display at Giant. This year some of the Facebook replies will note how early Rosh Hashanah is — so maybe the Halloween display doesn’t feel that strange — and at least one person will claim to have already heard Christmas music on the radio in a weird show of way-too-early one-upmanship. 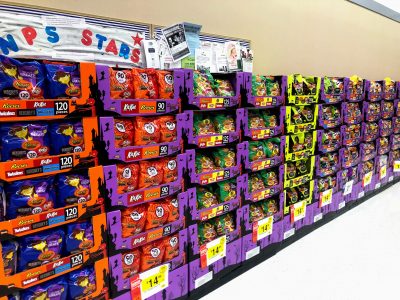 Thankfully, I’m more focused on the tomato part of the end of summer and inhaling as many BLTs as I can. In between BLTs, I did manage to squeeze in a few other good things to eat this week. (Covid note: all of the restaurants on this week’s list have nice outdoor patios if you, like me, are moving back in that direction.) 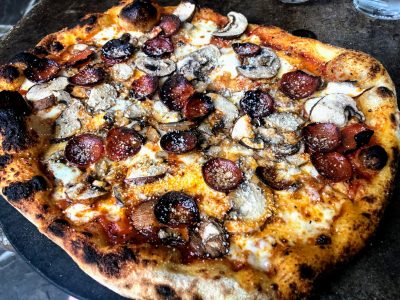 I’ve been in the tank for this Kensington charmer since Frank Linn and his wife Kate Diamond opened the doors in 2014. It’s still my favorite pizza in the DC area. The pizza itself is sui generis, which is what you’d expect from a tinkerer like Frank who fiddled with the dough recipe for years until it was just what he wanted. I’d call it Neapolitan-adjacent, with a similar spotted, pillowy circumference but a bit more crisp and less flop underneath. If you want to join me in the tank, watch the documentary on Amazon Prime called “New Chefs on the Block,” which follows the openings of Frankly…Pizza! and Rose’s Luxury in DC. The pizza is great either way, but it only adds to the pleasure to be rooting for the couple behind it.

CherCher (locations in DC and Bethesda) 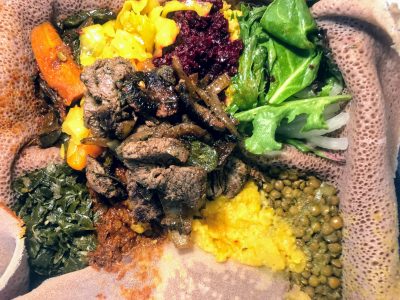 For years, Bethesda had exactly zero Ethiopian restaurants. Then in 2018 two Ethiopian and one Eritrean restaurant opened within a few months of each other. I worried whether they’d all survive and, sure enough, we’re now back to one. The good news is CherCher was my favorite of the bunch. I usually start with the Deluxe Vegan Combo and go from there — maybe adding the House Special Tibs and/or the raw Kitfo. CherCher has another location on 9th Street near the Convention Center, if you live in Shaw or you work downtown and offices become a thing again. 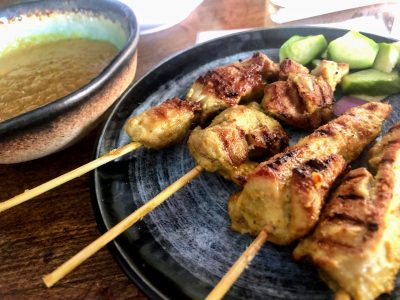 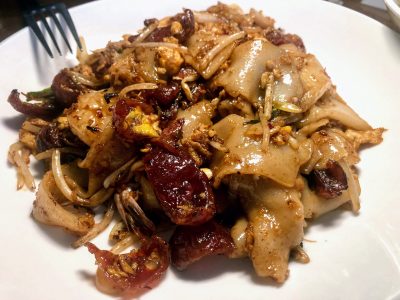 Malaysian cuisine nailed fusion cuisine before fusion cuisine became a thing (and way before it unfortunately became a pejorative term in some quarters), melding Malay, Chinese, Indian, Indonesian, Thai, and a myriad of other influences. Two dishes at Makan that I really liked were these juicy chicken sate (made with deeply flavored thigh meat rather than dull breast meat) and the Penang Street Noodles with great wok hei (that smoky, fire-kissed taste from proper wok technique). I’m hoping for a laksa (spicy coconut-noodle soup) on the menu when the weather turns cooler. 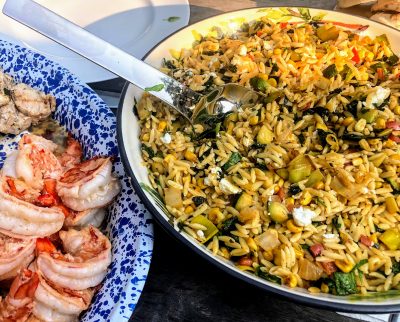 If you’re looking for a side dish to whatever you’re grilling these days, or maybe a sure-fire contribution to a potluck, look no further. This orzo with veggies is delicious, relatively healthful, and can be served warm or at room temp. It’ll hold on a buffet for hours.
It’s also easy to serve and easy to eat. Here’s the recipe, as best I can recall:

Start by prepping and sautéing the vegetables. It’s important to give them some good browning, so best to saute them separately (can combine onion and bell pepper) and don’t fuss with stirring them too much. For each batch, get the pan hot, add a glug of olive oil, then veggies, then salt and pepper, and saute until you have good color. Then scrape that batch into a large bowl and move to next one. You can really use any veggies here, whatever you have around. After the veggies are done, cook the orzo in pot of salted water mixed with 1 cup of chicken broth (can omit chicken broth and cheeses to make it vegan), drain, and return to the pot. Add a couple turns of olive oil, zest and juice of 1 lemon, 1 tsp of smoked paprika, 1 tsp oregano or Greek seasoning, 2 Tbsp tzatziki, a good shower of parmesan, and S&P to taste. Stir orzo and then combine with veggies in a big pan or pot to warm through. Add dried cranberries and 1/4 cup chopped parsley if you didn’t add kale or spinach so you have something green. Can also add toasted pine nuts if you want to gild the lily. Scoop into a serving bowl, top with feta cheese, and serve.

That’s it for this week. Now, if you’ll excuse me, I need to log on to Facebook. I thought I could remain above the fray but I just saw some Hamantaschen in the display case at Parkway Deli and the world needs to know when Purim is.