DC was once a sleepy pizza town. We didn’t have much of an identity or an iconic pizza style. Sure, we had lots of pizza places serving decent pies — it’s almost impossible to make a truly bad pizza, unless you’re one of those lost souls who insist that pineapple is an acceptable pizza topping — but none that anyone would argue stood up to the best pies in New York or New Haven. Ledo’s may be the closest we had to a home-grown style, but its square pastry-like crust never really caught on and the brand eventually settled for one-step-above-Sbarro mediocrity.

That all changed in November 1991. That’s when Pizzeria Paradiso opened its doors just off Dupont Circle. It was a revelation. Paradiso’s wood-burning oven cranked out pies the likes of which we hadn’t seen before in these parts. While the ingredients were ostensibly similar to those used by all the other pizza joints in town — flour, water, tomatoes, cheese, and herbs — their freshness and quality, and the care and technique used to put them together, transformed them into a completely different experience.

Fast-forward twenty-five years. DC has become a first-class pizza town — partly, perhaps, because we don’t have a specific pizza orthodoxy we need to uphold. Our aspiring pizzaiolos can borrow from any or all of the pizza traditions and simply focus on making their pizzas delicious.

One of the surprises is that three of my top four pizzerias aren’t actually in DC — they’re in the Maryland and Virginia suburbs — and the DC entrant has been open in its bricks-and-mortar incarnation only a short while. The odds are pretty good that you haven’t been to at least one of them. Pizza Paradiso is still on the list, as is Two Amy’s, although neither is any longer leading the pack.

Without further ado, here is my list of the best pizzas (and one high-profile, most disappointing pizza) in DC. 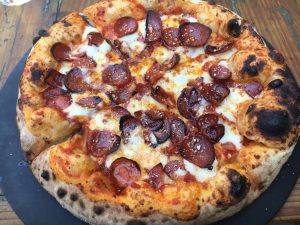 It’s hard to pinpoint exactly why I keep dreaming about these pies in Kensington. It starts with the pillowy, almost billowy, crust that owner Frank Linn developed first for a mobile brick oven business in 2011 before moving into brick-and-mortar digs in 2014. It has a softly tender mouthfeel while retaining enough char and spotting to provide a textural counterpoint. Frankly then adds a balanced alchemy of sauce, cheese and toppings under both Red and White headings — definitely try the house-made bacon whichever way you go — that makes the pie more than the sum of its parts. Add a cozy neighborhood vibe and comfy front patio and it’s easy to see why tables are hard to come by (don’t tell too many people but they’re open for Saturday and Sunday lunch when it’s much easier to get a table). 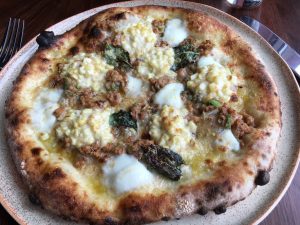 It seemed odd when talented chef Tony Conte left his downtown perch at Oval Room to open a little pizza joint near his home in the Maryland ‘burbs. But nothing seemed odd when I sat down to the pie you see here with Conte in the kitchen. The crust was first-rate — crispy, spotted and blistered underneath rather than charred, almost pastry-like end crust. But it was the chef-y toppings that took this one over the top. An amazing corn that lived somewhere between creamed corn and corn pudding. Shrimp sausage. Smoked Parmesan. Basil, green onion (and a hint of tarragon?) rounded the whole thing out. 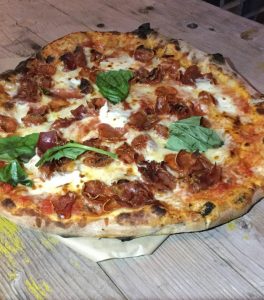 Pretty in Pepperoni with smoked prosciutto, $16

Thin crust with medium char/spotting on bottom. Center droops lightly but not wet or floppy. Very tender chew with plenty of cheese. Smoke flavor from wood-burning oven comes through more than most, particularly at ends. Tomato sauce less pronounced. 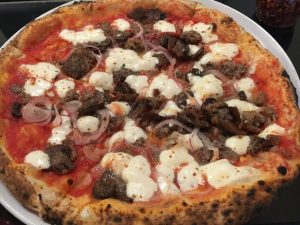 Pupatella is filled with a chaotic exuberance. You start by shuffling along a line that takes you in front of the skilled pizza makers stretching dough, ladling tomato sauce and dotting the mozzarella. Then you sit down and wait for them to bring you your pie.  It doesn’t disappoint. The crust has good flavor and is more chewy and supple than crisp, with a light speckling of char underneath. The sauce is bright and tomatoey and the little dollops of fresh mozz are just right. [Note: In a foreboding sign for quality control, Pupatella recently announced they’d be opening new franchised locations going forward.] 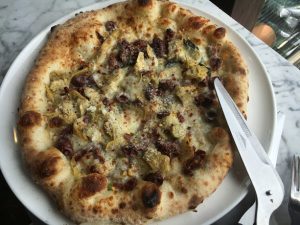 Pizza with olives and artichokes, $18 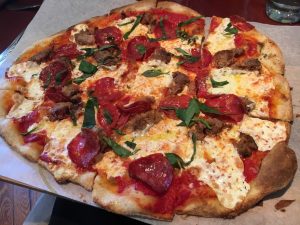 Some people might look at the thin, free-form crust and call it a flatbread. But top a flatbread like a pizza and it’s a pizza in my book. Semantics aside, if you’re a fan of thin and crispy pizza with absolutely no drooping, Vin 909’s “Eastport” style pies are for you. These babies are lightly topped with fresh tomato sauce and house-made mozzarella to keep the proportions perfect. The deeply tanned end crusts have some air bubbles that accentuate the cracker-like texture. For those looking for a similar style closer to DC, check out the Roman-style pizza at Stella Barra Pizzeria in North Bethesda. 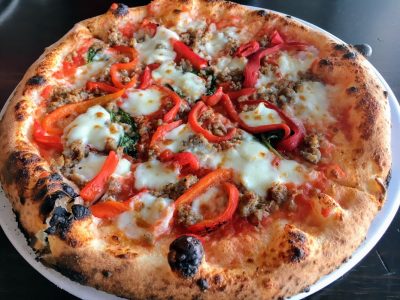 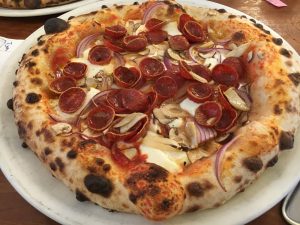 Fifteen years and going strong. The dining room at 2 Amys still buzzes with the happy hum of couples and families. Pizza is still the focal point, although there is much else to appreciate here (try the deviled eggs with green sauce and the ice cream). The pizza’s thin crust has good spotting and some minor char. The end crust eats like chewy baguette roll. Tomato sauce a bit faint and watery. 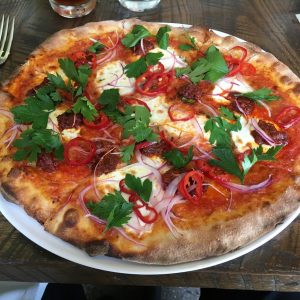 Crust thin and relatively crispy. Judicious amount of toppings that play well off one another. The ‘Nduja and pickled peppers bring just enough heat to keep things interesting. 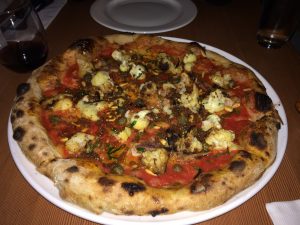 Owned by the 2 Amys people but a very different pizza. They mill their own wheat in-house and add spelt, which results in a crisper, more artisanal crust. Toppings tend to be flavor-forward. 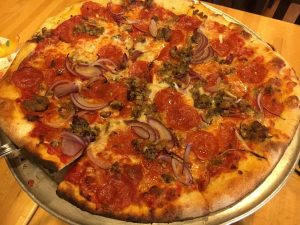 Pete’s became a success by bucking the Neapolitan model and going with a full-on homage to New Haven-style pizza. Sturdy crust from deck ovens that gets crisper as you eat your way out from the softer center to the bronzed ends. Good tomato sauce and solid toppings. If you’re looking for good DC carry-out pizza, this may be your best bet; it travels much better than the more fragile Neapolitan-style pies. 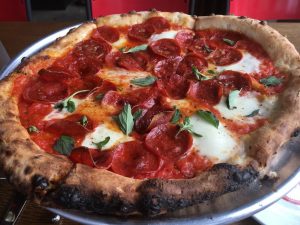 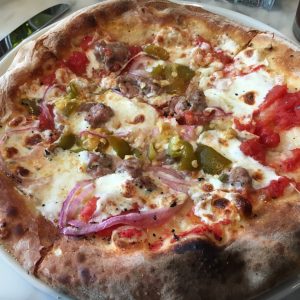 What once set the standard is now merely standard. Still decent char and fine ingredients. 12-inch pies come out better than 9-inch pies, which tend to come out with all of the ingredients congealed in the center. 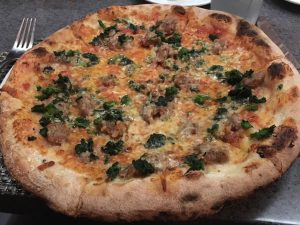 Salsiccia e Rapini pizza, $13.95
More than respectable pizza in a restaurant that is more wide-ranging than any others on the list. Chef Roberto Donna still turning out some terrific food in upper Northwest. Great option if not everyone in your party feels like pizza. 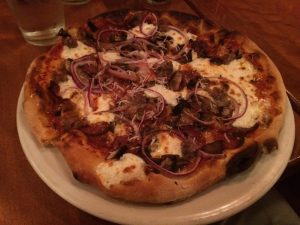 Best pizza option in Bethesda now that Pizzeria Da Marco has faded. Nice char on crust. Good quality toppings are judiciously applied. Big news is that Chef-Owner Melissa Ballinger has sold Mia’s to the folks who run Olazzo and Gringos & Mariachis. That may not bode well, given that Ballinger was usually in the house helping assure quality control. 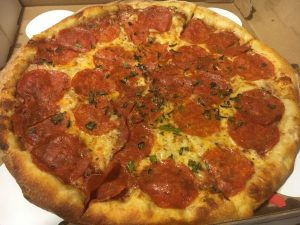 Bready crust browned, not charred or spotted. Cheesier, less sauce than most. Classic carry-out pizza, what Domino’s aspires to be. 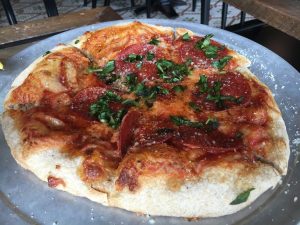 This thing is a mess. A soupy center gives way to a couple of inches of decent pie, ending in a massive end crust virtually devoid of toppings. It’s rare that I don’t finish what’s in front of me but those end-crust bread bombs were too much to choke down. And while putting honey on a pizza must have seemed trendy, it sweetens the tomato sauce into a dead ringer for the SpaghettiOs of my youth. It takes the title of “Most Disappointing” because of the chasm between reality and the high expectations of a pizzeria by the folks behind Red Hen and Boundary Stone. I know Tom Sietsema recently gave these pies a big thumbs up, but I stand by my assessment. (On the other hand, I hear that the other food at AP is excellent, so look forward to another visit sans pizza.)