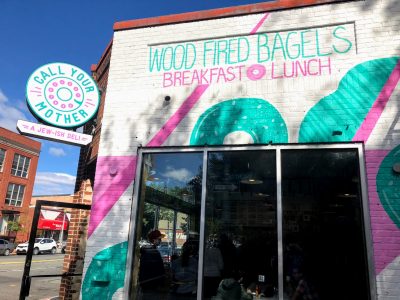 The much-anticipated Call Your Mother deli opened last Thursday in Parkview. On Friday, I was in line at 11 am for an early lunch. I know I told several of you that I’d wait to go with you and all I can say is I’m sorry. I held out as long as I could.

The exciting news is that the bagels at Call Your Mother are the best in DC. They have the heft and dense chew of good New York bagels combined with the sweet toastiness of wood-fired Montreal bagels. I don’t think there’s anything that you could put on those bagels that wouldn’t be delicious, but I’ll be testing that hypothesis and will let you know. One thing I can tell you right now — those bagels make the best breakfast sandwich I’ve ever eaten.

But before I go completely fan-boy, let me give you the not-as-good news.

First, this is not the Jewish deli we’ve been waiting for. It’s more like a fast-casual sandwich spot with heavy Jewish influences. To be fair, they never sell themselves as a Jewish deli but as a Jew-ish deli. So you’ll see some things you’d expect to see in a Jewish deli but often treated differently or with a cross-cultural spin (e.g., crispy pastrami rice and white fish croquettes).

Second, expect lines. That’s not surprising given the bagel-loving crowds CYM has been drawing at the Silver Spring and Dupont Circle farmer’s markets on the weekends. I thought I’d outsmart the masses by showing up at 11 am — post-breakfast but pre-lunch. The line was still to the door. I’ve seen pictures over the weekend of crowds well down the sidewalk. Maybe that’ll subside over time, but for now expect to wait. 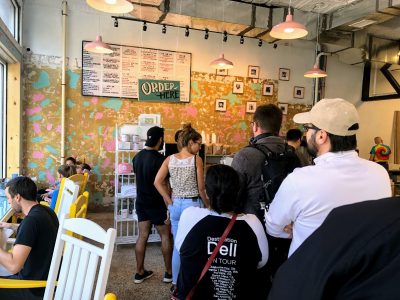 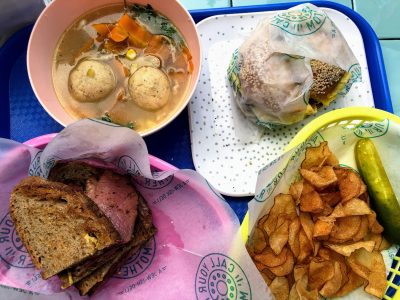 My lunch order: pastrami on rye with house-made chips, matzo ball soup, and breakfast sandwich with egg, cheese and bacon. I ordered as much as I could dining solo to provide an initial report — no need to thank me — but clearly I have a lot more on the menu to check out. 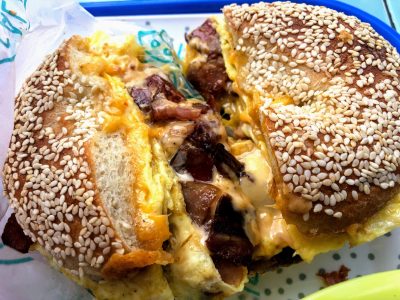 All other breakfast sandwiches are dead to me. The freshly-made eggs, the oozing cheese, the crisp bacon cut into bite-size pieces, all surrounded by that gorgeous sesame bagel. My mind tells me next time I should try the candied salmon and cream cheese bagel but my heart is already ordering another Shyne. 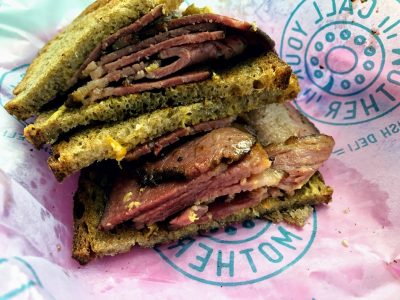 The Sean (hot pastrami on rye with mustard), $13

CYM’s pastrami gets points for tenderness and for paying attention to ratio of meat to bread. The best pastrami, though, like Katz’s in New York, is sliced thicker and can maintain more fatty unctuousness. The rye bread here is thin and a bit toasted. If I order this again, I might just make it a reuben, which might work better with this meat and bread. 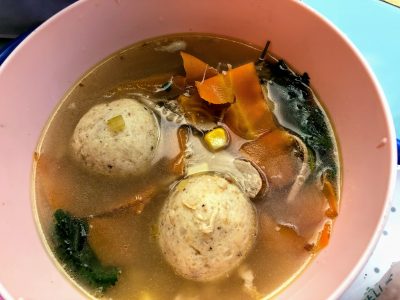 Calling it a sopa is a tip-off that this isn’t a classic matzah ball soup. It’s a riff on matzo ball soup based on owner Daniela Moreira’s Argentinian heritage, substituting cilantro for parsley and adding corn and other spices. It’s a nice bowl of soup although I found myself wishing that the broth had a bit more salt and a deeper chicken flavor.

I only ate a portion of the Call Your Mother menu so I can’t give you a comprehensive overview of what to order. My thumbnail advice is this:

Step One — Order one of these. 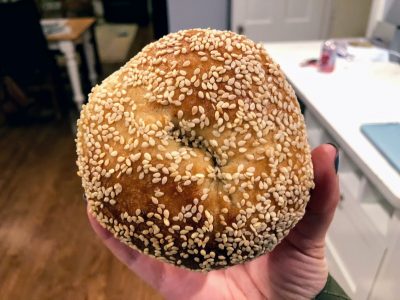 Step Two — Tell them to put something on it. Ideally, something you choose but really anything will do.

Step Three — Return to Step One and order a dozen to take home.

Step Four — Stop by my house and drop off a half dozen. You can keep the other half.

One Response to Call Your Mother for DC’s Best Bagels