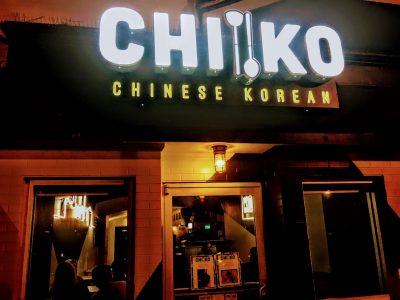 I’m such an idiot. I just got it — Chiko is short for Chinese-Korean. I even took this picture out front of the restaurant with the words “Chinese” and “Korean” written right underneath and two cooking utensils separating the “Chi” and the “Ko.” Maybe they should have had the bottom part read “CHInese KOrean” with the CHI and the KO blinking on and off. Then maybe I’d have an outside chance of getting it.

Anyway, I digress. Chiko, as everyone knows, stands for “Chinese-Korean.” It’s been the subject of a lot of well-deserved foodie buzz lately, a tiny fast-casual restaurant with serious food chops, courtesy of a partnership between Danny Lee of Mandu and dumpling-whisperer Scott Drewno, who recently left The Source. 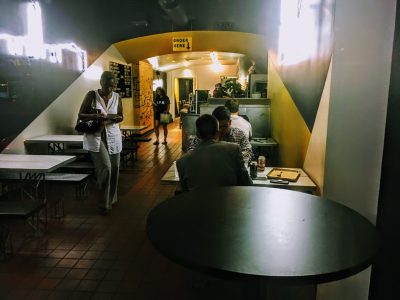 Chiko on a slow night. Unless you’re here for the tasting menu, place your order at the counter and find a seat at one of the handful of tables (or if you’re waiting for take-out, try to find somewhere to stand that doesn’t invade other diners’ personal space).

But as creative and tasty as Chiko’s food is, it’s not what excites me most about the place. The best thing is what they’re doing to the tasting menu concept. They’re reinventing it. Reinvigorating it. Redeeming it. For someone like me who’d almost given up on tasting menus, it was a revelation. While most people walk in without a reservation, order at the counter and try to find a table, eight lucky people a night get to reserve stools at the tasting menu counter in the back of the restaurant. (They have two seatings of four per night at 6 pm and 8:30 pm. Unlike the tables up front, you can make reservations on the Chiko website for the tasting counter.)

Cost — Traditional tasting menus can run $150-$300 per person. If you want wine pairings it can run $100 more. Chiko’s tasting menu is $50. Wine is an extra $9 a glass. It’s a tasting menu you can actually eat several times a year.

Serving Sizes — Traditional tasting menus often give you just a few bites per course. “If it’s good,” as my friend Mary Beth put it, “they never give you enough to really enjoy it.” Chiko gives you 8-10 bites of most dishes (other than the dumplings). You aren’t faced with the tragedy of liking the first taste of something and looking down at an empty plate.

Time — Traditional tasting menus serve you one course at a time. You have your few bites and then wait another 15 minutes to take your next few bites, and so on. It sounds like the kind of sadistic practice that should be barred by the Geneva Convention. The time investment alone can easily run three hours. At Chiko, they bring you dishes grouped into four courses — first a tower of snacks and appetizers, then a tray of salads and soups, then five entree samplings, and finally dessert. You’ll be done in a much more reasonable 1 1/2 hours or so.

Leaving Hungry — Do the math. At a traditional tasting menu of 12-15 courses, you may have 50-75 bites of food over the course of three hours. For some, that’s plenty; for others — like me — often not so much. You’ll see these discussions on every food board, the division between the big eaters who leave tasting menus and stop for a Big Mac on the way home and light eaters who say they left the meal “satiated” or some other nonsense word that I’m not even sure is English. Leaving hungry isn’t a problem at Chiko. Depending on how you count, you’ll have 15-17 dishes at 8-10 bites apiece. That’s 120-170 bites of food, probably double what you’d get on a traditional tasting menu (and since those bites are spread out over 90 minutes rather than three hours, your bites-per-minute (BPM) is far higher).

Before you light eaters start complaining about “too much food” (a complaint akin to “too many rainbows”), you don’t have to eat it all. You can stop when you’re “satiated” or take it home. Unlike the situation for big eaters in traditional tasting restaurants, everyone leaves happy. 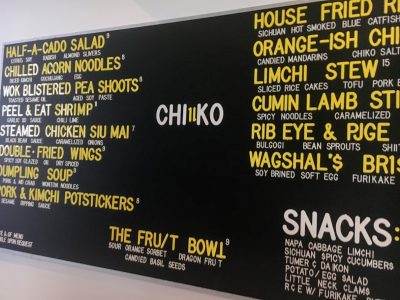 You’ll get to taste most of the items on the menu (the one item I really wanted to try and need to go back for is the cumin lamb).

Food Temperature — In a traditional tasting menu, the proteins tend to be small and pre-sliced in the kitchen. The problem is that as soon as those one or two rosy slices of beef or lamb are cut they cool off quickly. Fussing in the kitchen after they’re cut to strategically place some micro-green on the plate doesn’t help, nor does the lengthy lecture from the server about what you’re about to eat before you can dig in. At Chiko, the larger size of the portions keeps them warmer and there’s no kitchen fussiness or annoying server speeches to get in the way.

Focus on the Food — Traditional tasting menus have developed an obsession with plating. Every plate is unique and expensive (to buy, clean and replace when there’s breakage) all of which drives up the cost while having no impact on anything you put in your mouth. Sometimes the plating doesn’t even involve plates. Eating off logs and actual grass sod are popular to suggest foraging. At one popular tasting menu restaurant in Minneapolis — and this is true — they hang ham on hooks above diners’ heads and they have to eat it like baby birds without using their hands. Chiko doesn’t play that. The food comes in standard-issue Korean metal bowls and metal trays. There’s no breakage and nothing to distract from the food. 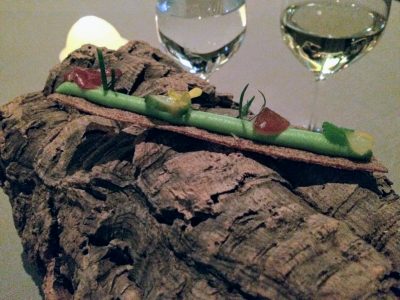 The tasting menu at Grace in Chicago began with fava bean puree on a teft cracker laid out on a log. Just like you’d find in nature.

General fussiness — The tiny courses assembled with tweezers on single-use serving pieces, the dots and whooshes of sauce that don’t register on the palate, the long descriptions of the food in front of you and how to eat it — take a bite of the freeze-dried cheese and then shoot the syringe of hot bone broth into your mouths and bring them together by swirling your tongue in a circular motion — it all adds up to a mighty pretentious night out. Not a problem at Chiko. You sit at a counter that’s unapologetically Formica. Servers bring the trays and tell you what’s in front of you but then let you drive the conversation. You can ask questions or just dig in. I once asked our server if there’s some particular order I should eat a tray of food in. Nope, he said, eat it however you want. I could have kissed him.

Let me take you through the experience. 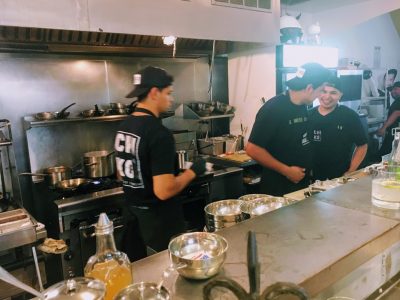 The view from the 4-seat tasting counter in the back of the restaurant.

As soon as you’re seated, you’ll receive a Tower of Snacks. 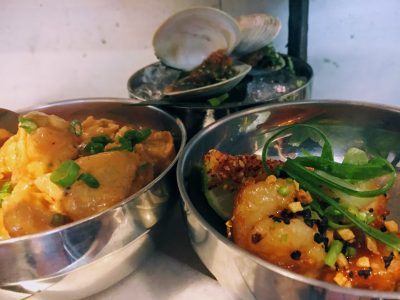 This tier moves more into appetizer territory. Pop the shrimp into your mouth shell and all so you don’t lose any of the delicious XO sauce. The Korean-spiced potato-and-egg salad would be great for a picnic. The clams are delicious but veer into traditional tasting menu territory with a single bite.

The siu mai is delicious (not surprising given the Scott Drewno pedigree); the noodles and salad both hit on multiple cylinders of texture (crunchy, soft, creamy) and flavor (tart, sweet, spicy, herbaceous). And yes, the noodles really are made from ground acorns; I didn’t even know that acorns were edible, but on the other hand: squirrels. The soup and potsticker are the least interesting dishes on the tray but not bad in any way. 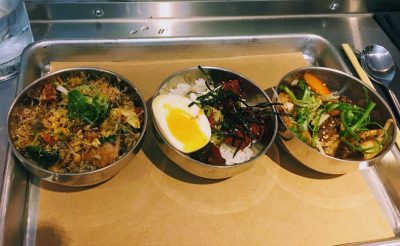 This tray contained my two favorite dishes of the night — the house fried rice and the brisket on rice. Check out their close-ups below. 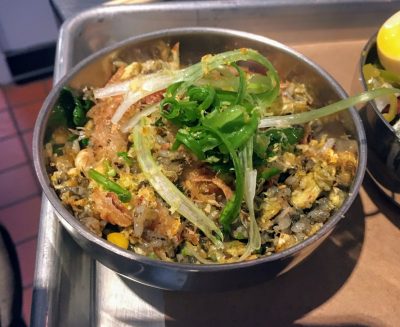 This is some amazing fried rice. They call it “black and blue” because it’s made with black squid ink and blue catfish. The smokiness of the catfish, the pungency of the squid ink, the familiar grace notes of egg and crispy shallots, it all comes together beautifully. 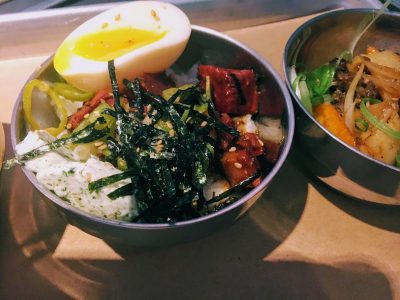 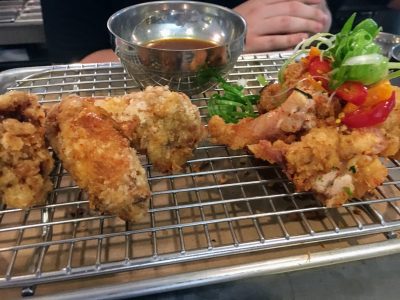 The wings are good, but truth be told there are better versions in town, including BonChon, with crisper skin and more succulent meat. But in the context of the broader meal, having something breaded and fried is a nice change of pace. Ditto for the orange-ish chicken, which needs the candied mandarins to give it real orange flavor. 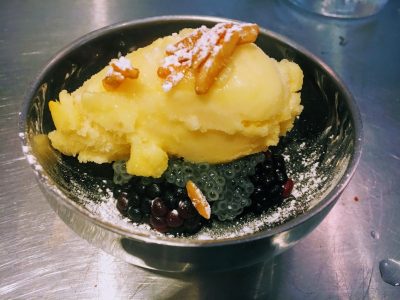 The sorbet is made specially for Chiko by Dolcezza. It’s a perfectly refreshing way to end the meal. The surprise here are the basil seeds soaked in lemongrass syrup which add a tapioca-like consistency that brings the dessert together.

Thanks, Chiko. You’ve done for tasting menus what Lin-Manuel Miranda did for Alexander Hamilton — taken something that felt bloodless and distant and made it accessible and cool again. And you don’t have to take out a second mortgage to enjoy it.