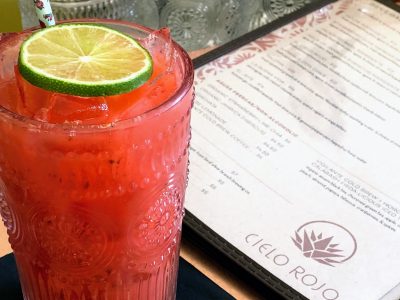 It all started last Saturday morning when I was trying to figure out what to do for lunch. My wife had gone off kayaking with some of the other women in the neighborhood, and the world — or at least lower MoCo and upper northwest DC — was my oyster. Then I remembered a new Mexican place in Takoma Park called Cielo Rojo. Perfect, I thought. Sonia isn’t wild about Mexican food or schlepping to Takoma Park, so I’m actually doing her a huge favor by knocking it off my list. I enter Cielo Rojo into Google maps, thinking that when I tell Sonia maybe I’ll leave out the huge favor part.

I walk into Cielo Rojo just before noon and sit myself in front of a friendly barkeep squeezing a crate of fresh limes. The only other person at the bar is a woman finishing what looks like a plate of delicious chilaquiles. Pretty quickly, I start to wonder who she is. She seems to banter a lot with the staff, maybe a regular I figure. Then she turns to a customer talking to the cashier and explains that she’s the co-owner and that they’ll be able to accommodate his special request. Whoa, she’s the owner? Some people might find it odd to be eating next to a restaurant owner in her own place. I find it endearing and real.

So we start talking. Her name is Carolina McCandless. She opened Cielo Rojo four months ago with her husband, David Perez. It’s their first restaurant. He’s a native of Mexico City and does the cooking. She was born in Chile but grew up in Bethesda, went to Whitman, and runs the place. The two met while they were working at a vegan Mexican restaurant in San Francisco. With the birth of their daughter, they moved back to the DC area to be closer to family and pursue their dream of opening a place of their own.

The family connections don’t end there. Carolina’s parents are not only still in the area, they own the Amano clothing store a few doors down Carroll Avenue. And Carolina’s father, Jeffrey, built all of Cielo Rojo’s tile table tops, benches, bar top and other custom furniture.

All of which is charming, but none of which would matter if the food wasn’t good. But it’s terrific. Chef Perez is very particular about sourcing his ingredients, including working with a coop of small farmers in Oaxaca to purchase heirloom corn and other products. It all makes a huge difference in what shows up on his plates. We’ll get to the food in a second.

Let me just say up front that I love a lot of restaurants. But I’m not necessarily smitten with them. That only happens once in a while, when the people, food and place align in some magical combination. It just happened again. I’m officially in the tank for Cielo Rojo. 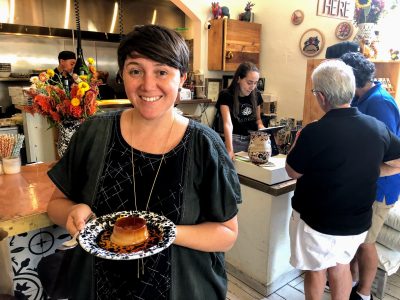 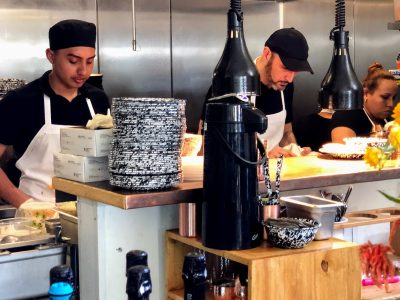 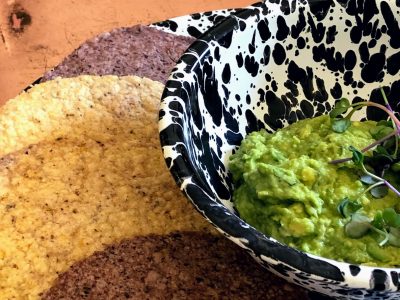 Ripe avocado, cilantro and lime provide the main notes of this straightforward guacamole. What sets it apart are the sturdy tostadas which, unlike a lot of chips in town, won’t disintegrate at the sight of a bowl of guacamole. 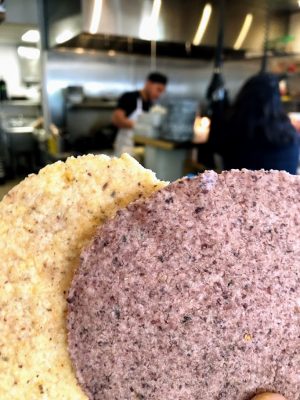 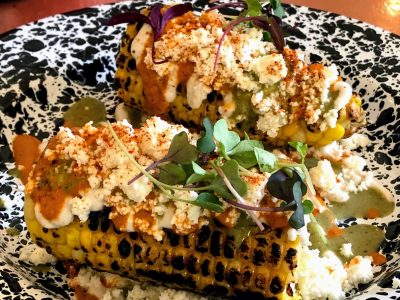 Elote is one of those dishes that’s gone from exotic to commonplace in a few short years. Now if only restaurants would stop serving it in January (along with Caprese salads). This seasonally-appropriate version is deeply charred and doesn’t skimp on the queso fresco or the mild kick from the chile de arbol and tomatillo sauces. 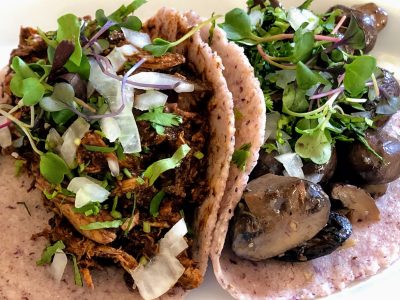 Naturally the tortillas are first-rate, these ones made from red corn. But the fillings hold their own. The chicken mole is tender and not too sweet. The drunken mushrooms are plump and garlicky and along with the nopales (grilled cactus) offer good vegetarian options. 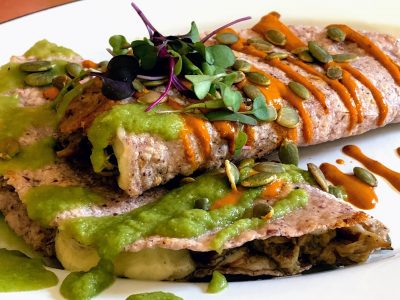 Quesadillas are almost always disappointing, with tasteless flour tortillas and dull cheese quickly congealing into a dull mess. This quesadilla was a revelation. Start with the welcome swap of flour tortillas for corn, which are crisp-chewy and not at all greasy. Add Oaxacan and Chihuahua cheeses that stay gooey and nicely complement the tender pork. Sprinkle with pepitas and drizzle the house salsas. Take a bite and realize, to paraphrase Jessica Rabbit, that it’s not the quesadillas’ fault. They were just cooked that way. 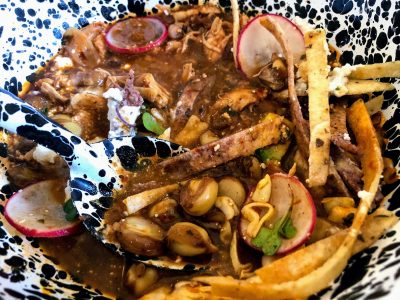 One of the best pozoles in town. It’s more subtle than most, the thickish, complex broth and the component parts creating a symphony of crispy, meaty, sharp, savory, creamy, herby and earthy. The real star of the dish is the hominy. It’s the best hominy I’ve ever had, so much meatier and richer than the wan stuff in a can. If you don’t think dried corn kernels treated with alkali sounds delicious, grab a bowl of this. 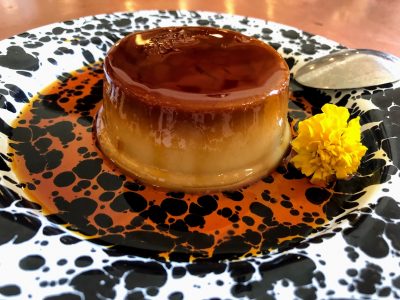 I’m a sucker for anything caramel, so if there’s a flan on a menu I’m ordering it. Still, a vegan flan made from cashew milk? But it’s actually really good, and since I assume it’s healthier than cream, I could easily make the trade-off. Especially since the accompanying caramel sauce is not only cooked to the perfect amber, there’s plenty to flavor every bite. There’s nothing sadder than a flan with not enough caramel sauce; it’s like getting a basket of fries and when you ask for ketchup they bring you one of those tiny silver thimbles.

I did my best to try as much as I could, but it was just me. I barely scratched the surface of what Cielo Rojo has to offer. I need to go back to try the dinner menu, the brunch plates and so much more. While that might not be great for the comprehensiveness of this review, it makes me very happy. Hopefully I’ll see you there. I’ll make room in the tank.

One last thing. Cielo Rojo doesn’t take reservations. Carolina tells me that the wait-times, if any, for lunches and weeknight dinners are usually only a few minutes. And at busier times there’s a workaround. When you’re en route, go to the Cielo Rojo page on Yelp and click on the waitlist. It’ll tell you whether there’s a wait and how long it is. At that point, if you want to put your name in it will ask you your party size and whether you’re 5-15 minutes or 15-30 minutes away. By the time you get there you should be near the top of the list.

3 Responses to Crushing on Cielo Rojo