For fans of Jerry Seinfeld’s terrific web series Comedians in Cars Getting Coffee, this video homage speaks for itself. For those not familiar, each episode begins with Jerry driving around in some funky vintage car and calling one of his famous comedian friends to ask them out for coffee. Jerry then picks them up and proceeds to regale them with the car’s vital statistics and unique features as they head to some local coffee shop for an insightful and funny conversation about comedy. You can watch old episodes on Crackle, which is a free download.

Many thanks and kudos to Emma Chessen for her brilliant direction and cinematography and to Scott Deutchman for his spot-on portrayal of a Bethesda dad.

One Response to Dads in Cars Getting Bagels 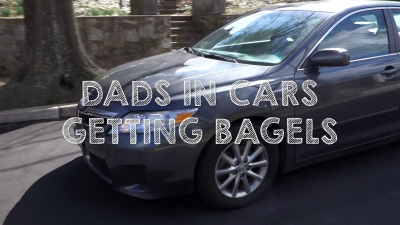