This is a food blog, not a political blog, but sometimes it’s worth pointing out how closely the two are bound together. I just got back from a big family trip through Germany, Austria, Slovakia and Hungary. I went to celebrate my mom’s 80th and of course to eat. What I came away with — besides an extra five pounds — was a reminder of something I often take for granted. A vibrant food culture depends on the continuing influx of new cultures and ingredients. In other words, if you care about food, you need to care about immigration.

Yes, I’m using food to make a broader political point. I’m like Eddie Murphy having commodities trading explained to me in Trading Places. I can only understand pork bellies if you put it in terms of a BLT.

Anyway, here’s what happened. I ate a lot of schnitzel in Germany and Austria: 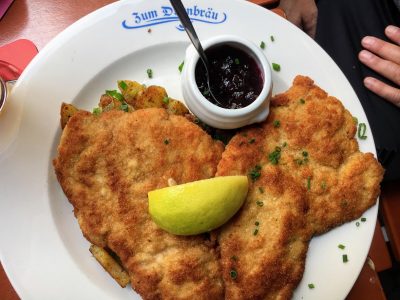 I mean, a LOT of schnitzel: 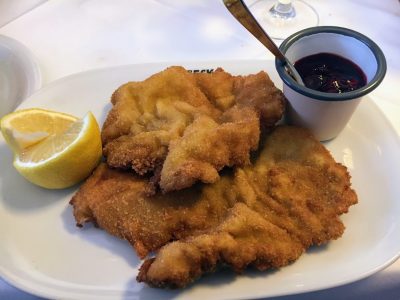 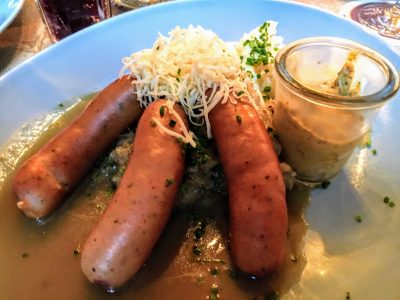 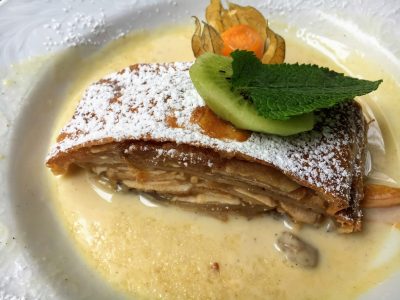 In Hungary, I switched over to paprikash with egg noodles: 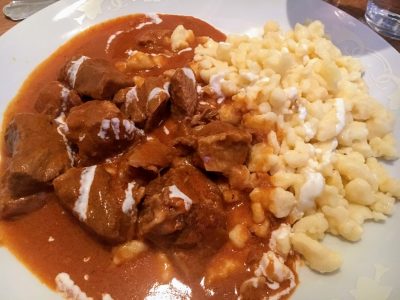 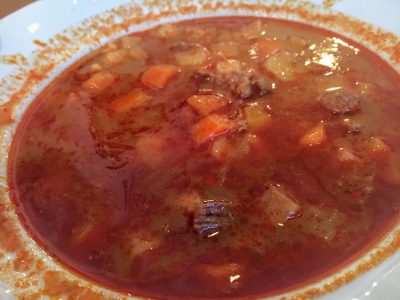 Don’t get me wrong. I like Bavarian/Slavic/Hungarian cuisine as much as the next pre-diabetic, but even I have limits. Man does not live by pig’s knuckle alone. Or if he does, not for very long. By my third day, I was ready for something different. Maybe something a little heavier on the spice or something green that wasn’t a token sprinkle of parsley.

That’s when I stopped in Munich at a little carry-out shop for a doner kebab. For those unfamiliar, doner is a Turkish meat dish — usually a beef/lamb mixture or chicken — stacked on a vertical rotisserie and cut into thin shavings as it cooks, like gyros or shawarma. Doner was brought to Germany by Turkish guest workers in the ’70s and spread throughout Germany and much of Europe. There are now more doner shops in Germany than McDonald’s and Burger Kings combined.

The doner meat is traditionally sliced by hand. There’s also an electronic handheld shaver that looks like a small Dustbuster. But the Cadillac has to be this fully automated version I ran across in Linz, Austria. What it lacks in romance it makes up for in tireless precision:

The brilliance of the vertical spit, of course, is that the meat bastes itself with delicious fat as it cooks rather than dripping into the fire. The meat is then either served on a plate or stuffed into flatbread with lots of veggies and garlic sauce and maybe some feta. It’s meaty and tangy and crunchy and creamy and warm and cool and just about perfect. 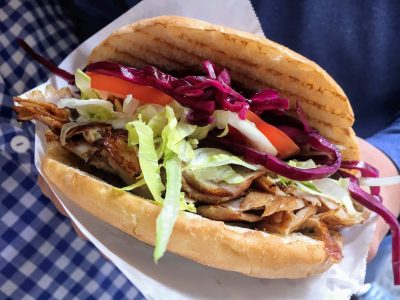 And it was exactly what I needed to cut through the schnitzel. In the end, the top three things I ate on the trip were all doner kebabs — the best being a chicken doner from a nondescript shop in the nondescript village of Vilshofen, Germany where the proprietor rolled out the pita by hand and baked it fresh. Fifty years ago, that doner stand wouldn’t have existed. It’s there today because of Turkish immigrants.

I’m going to go out on a limb here and declare that the more immigrant-friendly a country is, the better the food. Sort of like soccer teams. Look at the French, Belgian and English World Cup teams and tell me that immigration isn’t a strength.

The beauty of food, though, is that its real impact isn’t felt immediately. It’s felt in the second, third and fourth generations as it mixes with and adapts to its new surroundings. Tomatoes are the classic example. We think of tomatoes as quintessentially Italian but they didn’t exist in Italy until the 16th century when they arrived from the new world. Or take a more endearing recent example — Hawaii’s love affair with Spam, which GIs introduced to the island during World War II. In both cases, the new foods took took root in their adopted countries and morphed into something wonderful that couldn’t have been predicted (don’t knock Spam fried rice until you’ve tried it). That’s why I never thought of “fusion” cooking as a pejorative. It can be good or bad, like any cooking, but at bottom it’s a healthy process that’ll keep our food culture vibrant. There’s hardly an upscale restaurant in DC these days that doesn’t incorporate Asian, Mediterranean, Middle Eastern, or Latin influences — or sometimes all four, like Chloe or Kinship.

And none of it would have happened without immigrants. So this 4th of July, I celebrate all those who came from other places to make DC a better place to live and eat. I’m sure I’m leaving a lot of people out, but for starters:

The countless cooks, dishwashers and other back-of-the-house workers

Now, if you’ll excuse me, I feel like a doner kebab. I hear there’s a pretty good one at Cafe Divan in Georgetown. It’s run by a Turkish immigrant named Cavit Ozturk. I hope he makes his bread to order.

3 Responses to As American as Doner Kebab