I recently started a strict new diet with a single loophole: I can eat whatever I want for the blog. Which makes it the perfect time to put together my definitive rating of DC-area falafel shops. There’s nothing that makes a diet more bearable than a comprehensive survey of fried chickpea-fritter sandwiches. Stay tuned for next week’s survey on which local Outback makes the best Bloomin’ Onion.

The key to a good falafel sandwich is, of course, the falafel balls themselves. They should be delicious enough to eat standing alone. They should be crisp and almost nubby on the outside and moist and flavor-packed on the inside. They should never be crumbly or pasty. They should taste of chickpeas, onion, cumin, coriander, salt, and fresh green herbs like parsley and cilantro. My view on herbs is the greener the better, so long as the balls hold together.

For toppings, I generally stick with the classics like chopped cucumbers and tomatoes (aka Israeli salad), green/purple cabbage, pickles, and onions. And then douse the whole thing with tahini and hot sauce. I never add hummus, which muddies the flavors and weighs the sandwich down.

The pita bread should be soft and slightly springy and yet strong enough to hold everything together. There’s nothing worse than a pita that starts disintegrating on you. You try your best to bite strategically and put as little pressure as possible on the growing fault lines, but it’s a losing cause. Like quicksand, the more you struggle, the faster you’ll go down.

So with that introduction, as the great Casey Kasem would say, on with the countdown. 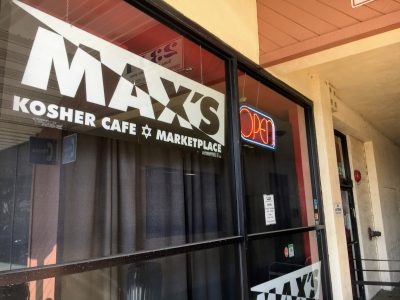 My favorite falafel sandwich in the DC area is found in a Wheaton strip mall. Max’s Cafe has been around for over two decades and has seen its better days. The deli case near the entrance, which once offered prepared foods to go, is now dark and curtained off. Thankfully, Max’s falafel-stand-within-a-restaurant is still there. Order your falafel at the main counter and take your ticket over to the stand (which also serves a pretty decent shawarma). There will likely be a line of customers patiently waiting in the falafel line, which will seem odd because Max’s main food counter will probably be deserted. Those are what my kids call context clues. You go to Max’s for falafel. And only falafel. 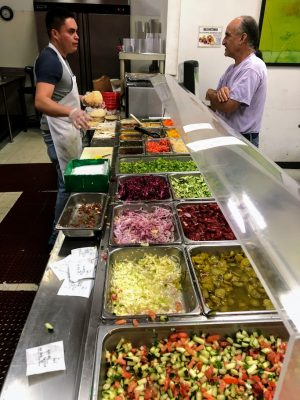 Max’s is one of those old-school falafel operations where you go down the line and tell the guy behind the counter (it’s always a guy) what toppings you want and whether you want it spicy or not. Please give some thought to those questions before it’s your turn. It’s a tremendous faux pas — especially if I’m behind you in line — not to be ready when you’re up. If you’ve been looking at your phone or chatting the whole time and the first thought you’ve given to toppings is when the guy is waiting, I can’t be responsible for what happens next. But it’d make Shirley Jackson blush. 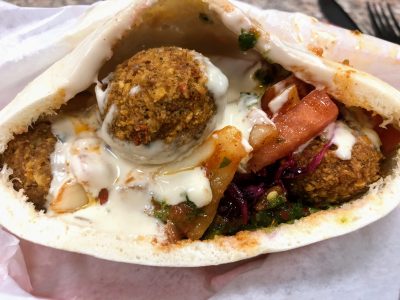 A whole falafel sandwich at Max’s is $7.75 and comes with six good-sized falafel balls. The sandwich feels heavy and substantial in your hands, the pita softly cradling the ingredients in a lumpy embrace. 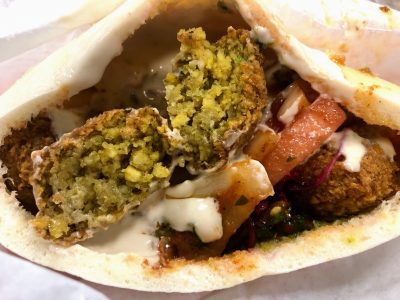 The falafel balls at Max’s are moist and well-spiced. I wouldn’t mind a few more green herbs in the mix but I’m quibbling. 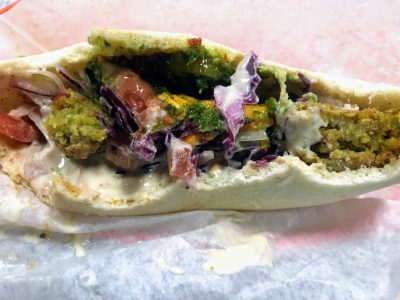 Where Max’s really shines is sandwich construction. Here’s a shot halfway through and all the components are still in play and beautifully balanced. That’s no accident. 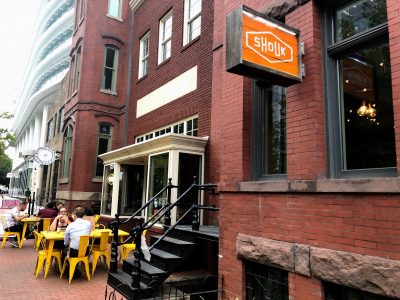 Shouk is a fast-casual modern Israeli street food restaurant that only added falafel late last year (also try the Shouk burger, which puts most other veggie burgers to shame). Shouk’s falafel sandwich is relatively pricey at $9.95 for five balls, but all of the components are fresh and you’ll feel virtuous eating there even if, like me, you pass on the vegan feta made with almond milk. 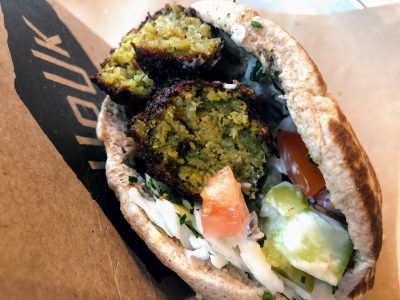 Shouk’s balls are crisp and substantial with a nice hit of herbs and salt. The bread, in keeping with Shouk’s healthy vibe, is wheatier than most but manages to avoid dryness. The standard toppings include cabbage, red onion, pickles, tomatoes, and a lemony tahini that brightens the proceedings. The relatively large veggie chunks give the sandwich a Greek salad-y feel. 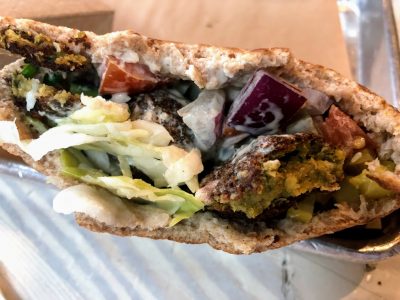 Shouk knows ingredient dispersal. There’s nowhere to go at the halfway mark that won’t get you a solid bite. 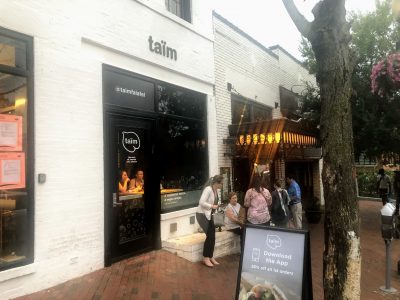 A surprise at #3. Taim’s recent arrival in Georgetown was one of the reasons I wanted to do the survey in the first place. Taim is one of New York City’s most popular falafel shops and is helmed by Israeli celebrity chef Einat Admony. The DC location is Taim’s first foray outside the Big Apple. I was sure that Taim would blow everything else away.

Let’s start with the good news. Taim’s falafel balls are spectacular, verdant green and chockfull of parsley, cilantro and mint (the balls come in green or harissa). If this were a survey of tastiest falafel balls, it’s Taim in a landslide.

But there are execution issues that rankle. First, puzzling ingredient dispersal. The sandwich comes with four balls placed on top of the sandwich and two at the very bottom. I hate to single out social media (who am I kidding, no I don’t) but I wouldn’t be surprised if the reason for the top-loading is it looks better on Instagram. Once you eat those balls off the top — which is easy to do because they’re on the smallish side — there’s nothing but toppings as far as the eye can see until you reach the balls at the very bottom.

Second, Taim’s bread can be an issue. One time I went it was fine, but on my second visit it completely fell apart halfway through. I blame the hummus, which was added by mistake but apparently put too much strain on the system. I know, I know. I should have returned it. But I hate wasting food. Plus it was a total mess by the time I realized hummus had been added and I thought it’d be awkward to drag the wreckage back to the counter and ask for a new one. 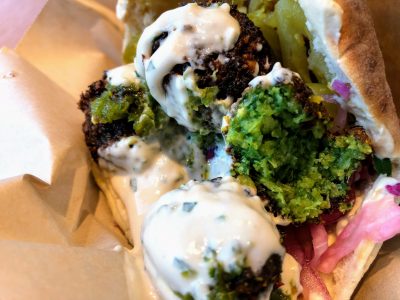 Taim’s sandwich comes looking like you struck the felafel motherlode but turns out to be more Potemkin Village. 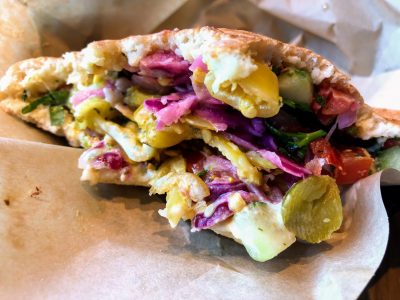 Once the four top-loaded balls are gone, you’re looking at a falafel-free slog until you hit bottom. 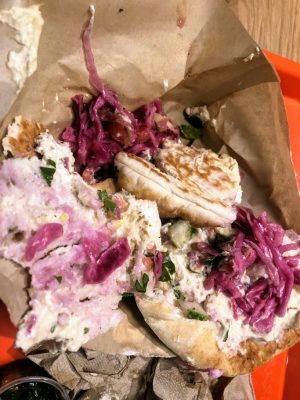 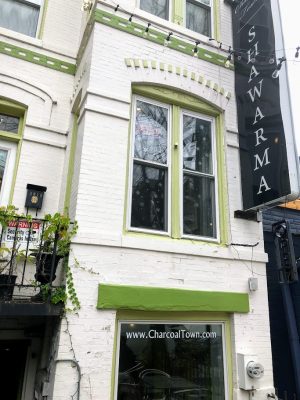 Charcoal Town is known for its charcoal-grilled shawarma, but I heard they also made a pretty good falafel. It’s certainly different. For $7.99 you get a foot-long lavash-type flatbread that’s snugly rolled around the fillings and crisped on the outside. It’s the kind of easy-to-eat package that inspired the Hot Pocket but won’t send you to Urgent Care with molten-cheese mouth burns. 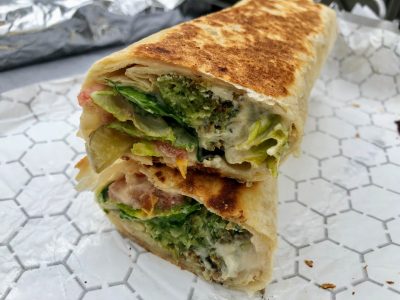 Charcoal Town’s falafel balls were moist and the herbiest in the survey next to Taim. I have no idea how many come in a sandwich or even what shape they were. This sandwich was on lockdown. On the positive side, that made ingredient dispersal a snap and the falafel-to-filling ratio stayed consistent throughout. 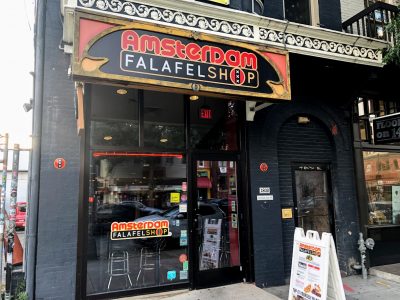 I had higher hopes for this place, given its outposts in restaurant-savvy neighborhoods like 14th St and Adams-Morgan. I forgot to take into account the fact that many of their customers were coming in after a night of carousing, and if not totally inebriated were certainly far from ebriated.

The falafel balls at Amsterdam Falafelshop are undistinguished: somewhat dry and stodgy and lacking any discernible herbs. It could have been that they’d been sitting out too long, which, if true, is more of a quality control issue than an excuse.

But even more troubling is the way they serve the falafel. They hand you a pita with five unadorned balls and then you add the toppings and condiments. If you’ve read this far, you can guess my view of a do-it-yourself falafel bar. It’s the worst idea since someone thought Russell Crowe could carry a tune. If you go, skip the sandwich and make yourself a falafel bowl. There’s far more room for error. 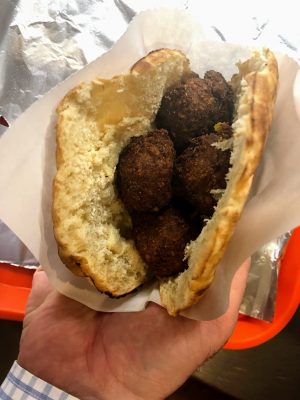 DYI falafel? It’s like the dentist handed me a mirror and a drill and went for coffee. 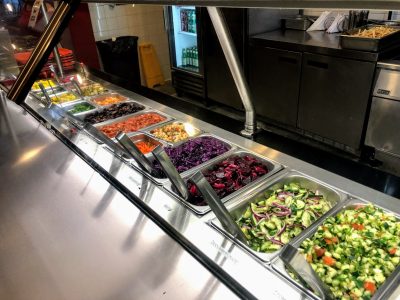 The fixins’ bar is well-stocked and fresh. Opt for a bowl and avoid the fool’s errand of trying to construct a professional falafel sandwich. 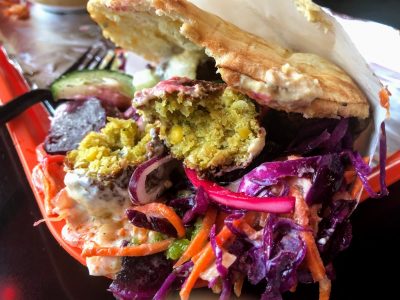 Tried my best, but it’s a semi-hot mess. 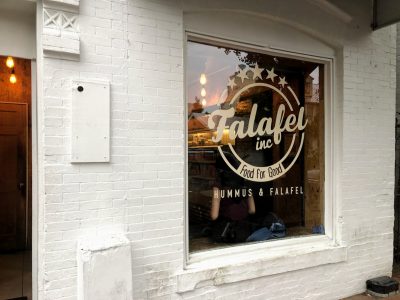 Falafel, Inc. sells its falafel sandwiches for $3 each. Yes, you read that right. $3 for an entire falafel sandwich. Plus, every order helps feed refugees. So it gives me no pleasure to pronounce this the worst falafel in the survey. I can’t grade on a curve.

Not surprisingly, Falafel, Inc.’s $3 sandwiches are a tad skimpy. The tough, thin pita is only partially filled. The balls aren’t terrible but aren’t not terrible either. The veggies are sparse and unexciting. 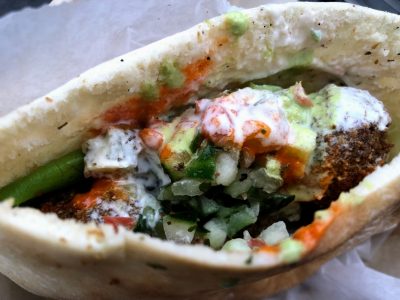 I don’t know if “understuffed” sandwiches is a thing, but if it is, Falafel, Inc. nails it. 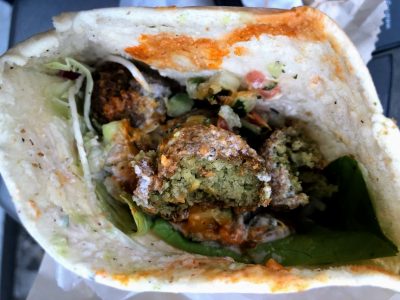 The only person who could be inspired by this sandwich is Georgia O’Keefe.

So that’s the falafel round-up. I’m pretty comfortable with the rankings as of today, but I can’t help wondering if we’re in for some movement at the top. Can Max’s survive on falafel sales alone? Can Taim settle in and fix its ingredient dispersal problems? Most importantly, will the phrase “ingredient dispersal” start trending on Twitter? I’ll answer these questions and more in my falafel shop update, which I plan to get to early next year. That is, assuming I’m still on my diet.

One Response to Rick Eats (and Ranks) DC’s Best Falafel