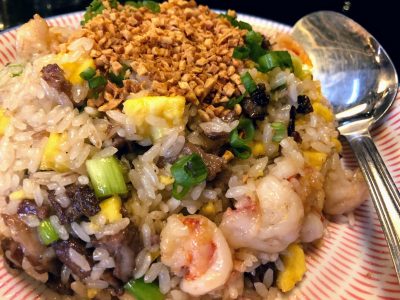 Fried rice is having a moment. It’s gone from familiar standby to popping up on every street corner, like a late ’90s Wall Street Deli.

Part of the reason is mutability. The only constants are rice and a pan. After that, it’s chef’s choice. Fried rice will take just about whatever ingredients and flavor profile you throw at it. You can go classic with roast pork, peas, carrots, and soy, or create a crazy cultural mash-up with merguez sausage, Brussels sprouts, Calabrian chiles, and a drizzle of Yum Yum sauce (which doesn’t sound half bad). The one thing I feel strongly about is there should be some type of egg component. It doesn’t have to be traditional scrambled; it can be fried, poached, cured, or anything else. Topping fried rice with a runny, soft-cooked egg is a zeitgeist combo-bomb the likes of which hasn’t been seen since Starbucks recently introduced a pumpkin-spice cold brew.

Fried rice’s endless possibilities distinguishes it from another comfort food having a moment, cacio e pepe. Cacio e pepe has a few highly-specific ingredients. And while you can riff on them a bit, you’re tethered pretty closely to the mother dish if you want people to get the reference. Which is why I think cacio e pepe will fade first. Fried rice can still surprise. Cacio e pepe may still be delicious but the thrill is slowly receding — like a Taylor Swift song the hundredth time you hear it (except for “Love Story,” which never gets old. Yes, I’ll die on that hill).

So welcome to peak fried rice. Let’s take a look at my current favorites around town. 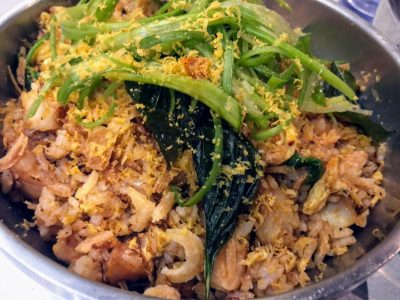 Fried rice takes well to smoky flavors. Particularly when they’re as delicious as the smoky blue catfish in ChiKo’s rendition. What I love about this dish is the balance. Rice remains the star but the supporting cast — crispy shallots, fried basil leaves, scrambled egg, grated yolk, green onion, smoked catfish — play off each other beautifully. It’s the Ocean’s Eleven of fried rice. (Unless you hit it on an off night, then it’s more like Ocean’s Twelve. Of course, if you hit it on a really off night it may feel like Ocean’s Thirteen and leave you wondering what the fuss is all about.) 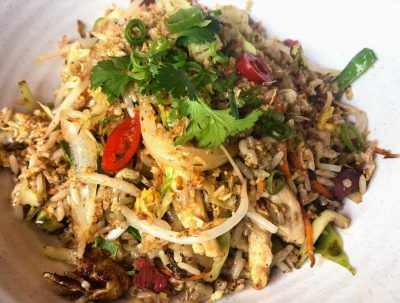 If you can tear yourself away from the addictive lechon belly, sisig and pancit at this Filipino storefront near White Flint Mall (aka Lord & Taylor’s Revenge), give Papa B’s Fried Rice a try. It’s a great meal-in-a bowl with sweet longanisa sausage (similar to a Spanish chorizo), green cabbage, onion, carrots, snow peas, shiitakes, cilantro and shaved adobo-cured egg yolks. The kicker is the crab-fat butter, which is a Filipino paste extracted from tiny, freshwater crabs. I have no idea if it’s really crab “fat” or a translation issue but it combines the oceaniness of roe with the unabashed unctuousness of Littlefinger.

This updated take on classic Chinese fried rice includes tender beef brisket and plump shrimp — the combination is off-menu but you can always order it — showered with granulated garlic and shallots. The predominant flavor is sesame oil slightly sweetened with brown sugar. I particularly like the egg component: a chilled omelette sautéed in sesame oil à la minute and cut into little rectangles. 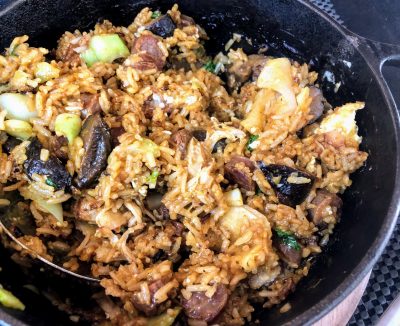 This Peruvian concolon (scorched fried rice) is a true cultural mash-up. It starts with flavors and techniques that Chinese and Japanese immigrants brought to Peru in the late 19th century and adds multiple Peruvian twists. So on the one hand you’ve got pork belly, lap cheong sausage, shiitake mushrooms, bok choy, pickled daikon and Chinese 5-spice, but it’s combined with Peruvian ahi amarillo peppers, chicharrones, and a side dish of rocoto pepper sauce that you can add to the finished dish for extra fruity heat. The baked egg in the center of the pot is still runny, so the yolk coats the rice when it’s tossed at the table. The best part is the crisped rice at the bottom of the pot, which adds the toasty crunch of a Persian tahdig. The only element I could do without is the scattering of chicharrones, which doesn’t integrate easily and amount to gilding el lirio. 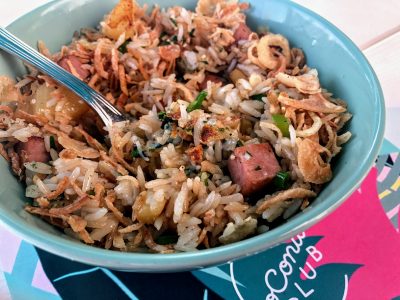 Chef Adam Greenberg started playing with this Hawaiian-influenced fried rice at a pop-up he was doing at Lucky Buns and it’s continued to evolve over time. Lucky Buns chef Alex McCoy, for instance, suggested adding jalapeños to the melange of jasmine rice, Spam®, circulated egg, pineapple, crispy shallot, furikake, fish sauce, ginger and Tamari. The diced Spam® with the rice and crispy shallots brought back loving memories of a dish I practically lived on in college: hot dogs cooked with Rice-a-Roni and sprinkled with Durkee Onions. (I know it’s not quite madeleines, but this was Madison, Wisconsin in the ’80s, not 19th century France.) 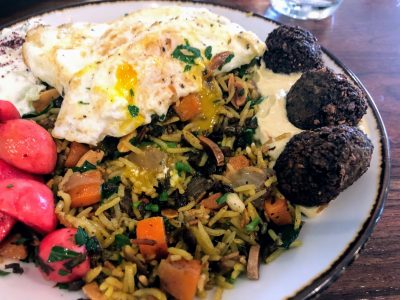 Add felafel balls and hummus and this Lebanese fried rice makes a perfect lunch. It has some of the vibe of a traditional Lebanese rice pilaf with the advantages of a made-to-order fried rice. There’s a nice interplay between warm and cool elements, a crunch from the felafel and radishes, a tang from the yogurt, and sweetness from the carrots, onions and golden raisins. I just did my review of DC felafel shops here. Suffice it to say that these balls would hold their own against most of the felafel specialty shops. 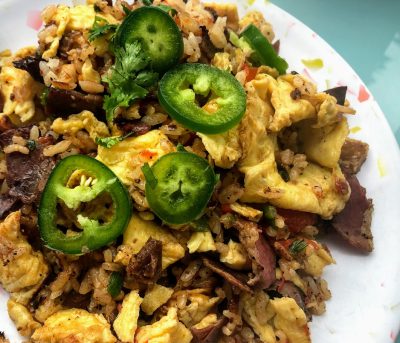 The most egg-forward version in the survey, this pastrami fried rice at CYM would make a great brunch dish. There’s plenty of smoke and savor from the pastrami and sofrito of slow-cooked onions, red bell peppers, garlic and smoked paprika, and some heat from cooked and raw jalapeños. Finished with lime juice, a splash of soy and a sprinkling of cilantro, it’s comfort food for the Jew-ish/Latin-ish soul.

It’s hard to know how long peak fried rice will last. These things have a life cycle. Some foods that become hugely popular will peak and fade away, like lobster Newburg or Mrs. Fields cookies. Others, like tuna tartare and Brussels sprouts, will stick around at a more sustainable level and achieve Caesar salad status — not jump-out-of-your-seat exciting but still loved and appreciated for their familiar comfort. Fried rice (and cacio e pepe) probably belong to a third category: foods that come out of a particular cuisine or region of the world, become a broader cultural reference point, and then, when the cheffy permutations feel played out, happily return to its roots waiting to be “rediscovered” someday. If that’s true, any day now we could see new cheffy spins on dishes like fondue and moo shu pork. I could live without the reinvention of Chicken Kiev.

One Response to DC Restaurant Dish of the Year: Fried Rice