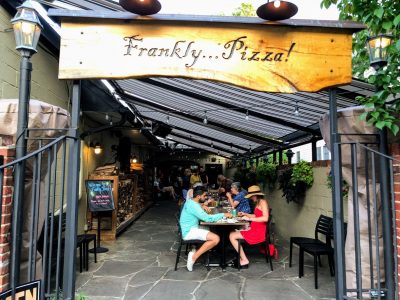 Frankly…Pizza! is my favorite pizza in the DMV. That won’t surprise longtime readers, who may remember one of my very first posts in October 2016 ranking the Best Pizza in DC with Frankly…Pizza! occupying the top spot. But there are a lot of new people here, and on the off chance that a few of you haven’t gone back to read the whole catechism, I thought it was time to properly recognize Frankly’s with its own review.

Loving Frankly…Pizza! was the last thing I expected when I first stumbled on the place. First, the name isn’t Italian; it’s barely English. Then there’s the Kensington location, which doesn’t boast a best-of-the-DMV in any category other than Mormon Temples.

But I started revising my opinion even before I tasted my first pie. Frankly…Pizza! is a cozy, welcoming place with a great patio and a laid-back, slightly funky vibe. Then I was handed a menu and saw that they serve pizza and almost nothing else. No apps other than olives and an arugula salad. No other main courses. No side dishes. That’s a sign of focus and confidence. I love places that do one thing and one thing only. They’re working without a net.

Sure enough, the owner, Frank Linn, is one of those pizza-obsessed souls who fussed over his dream dough for years before opening a mobile kitchen and eventually a permanent space. Look at the best pizza joints in cities like New York and Philadelphia and you’ll often find someone like Frank. These guys (they tend to be guys) are intensely devoted, almost obsessed, with pizza-making and fiercely protective of their dough.

And the dough really is the magic at Frankly. It takes several days to develop the crust’s pillowy, almost billowy, texture with just the right amount of salt and chew. The pies also take on the kind of pronounced char on the lip and underside that make my knees buckle.

By all rights, my favorite pizza should be somewhere else. Pizza preferences, like sports allegiances, are usually determined by where you lived when you were twelve years old. The pizza I grew up with in Minneapolis was thin-crusted and heavily-cheesed and always cut in criss-cross squares. More Vin 909 in Annapolis or the original Ledo’s. Choosing Frankly’s over the pizza of my youth is like choosing the Redskins over the Vikings. (You can’t see me, but I just shuddered.) 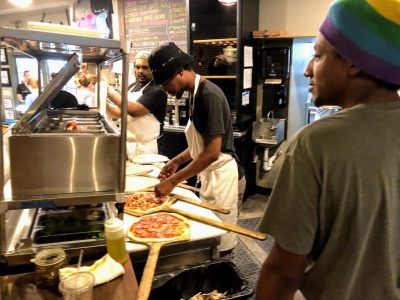 Working the line one pizza at a time. 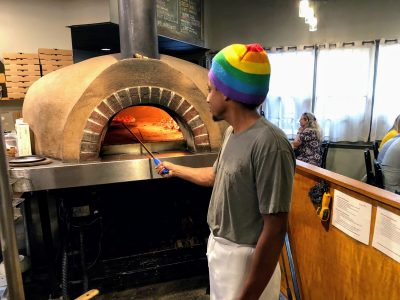 True to form, this isn’t some fancy pizza oven that arrived ready-made from Italy. Frank Linn and his father, Frank Linn Sr., constructed it themselves. 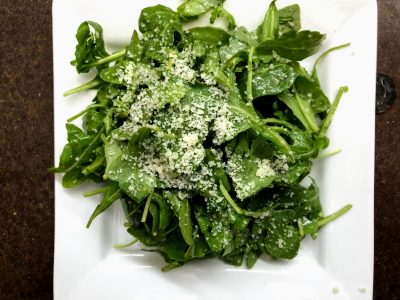 You can have pizza, olives or this arugula salad. 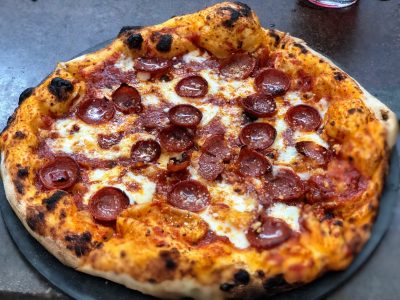 The red pie. Some people think the tomato sauce is too sweet, but they’re wrong. As Tim Carman pointed out, it works well with the slight bitterness of the charred crust. And it works particularly well with pepperoni or other spicy toppings. 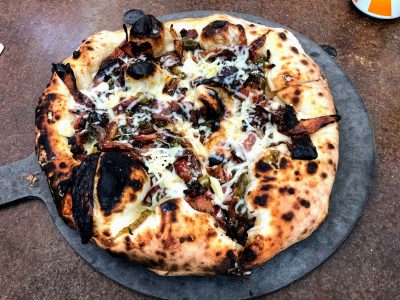 A tangled white pie that lives up to its name and hits on all cylinders — smoky, spicy, sweet and salty. 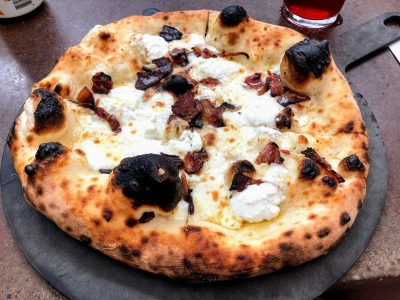 Or go simple and give your full attention to the crust. 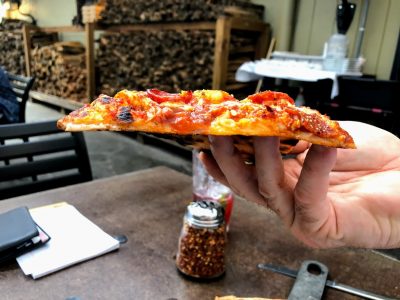 The crust can sag a little in the center but can still be picked up and eaten. I’m firmly opposed to eating pizza with a knife and fork, even pre-Trump. 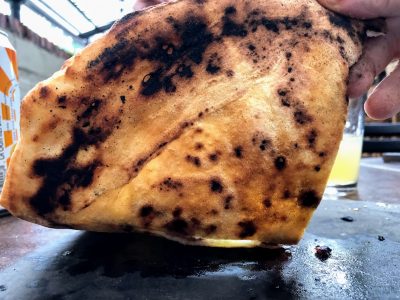 Bottom char like this is like peeking at your cards and finding you’ve got pocket aces. You just smile and know it’ll be a good night.

The only fly in the ointment at Frankly…Pizza! — as long as you like pizza — is the potential wait during peak times. It helps if it’s nice and the patio’s open. Or come at lunchtime when things are far less busy. I like to go for weekend lunch and hang outside on the patio. I’m easy to spot. I’m the one in the Vikings jersey.