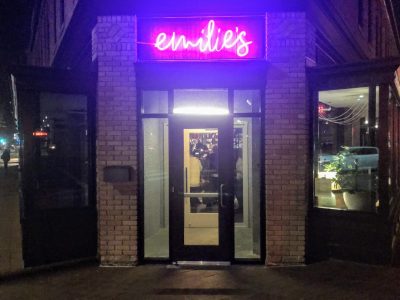 Emilie’s has been open for less than two months and it’s already one of the toughest reservations in town. You could point to the inviting open kitchen or the welcoming staff, but at bottom there’s one reason for the crowds: the cooking of Chef Kevin Tien.

For you civilians out there, Tien is the 32-year old Louisiana native who made his name at Himitsu, the cozy 24-seat restaurant in Petworth that closed earlier this year. When Tien and his partner Carlie Steiner announced that they were closing Himitsu and going their separate ways, foodies across the city exploded in acts of civil unrest. Some made reservations for four people and showed up with six; others went to the restroom multiple times during dinner to make waitstaff repeatedly refold their napkins. Only when Tien announced that he’d be opening Emilie’s was order restored.

Why does Tien’s cooking attract such a loyal following?

It starts with his uncanny ability to range across cultures — mostly Asian but Latin, Italian, the American South, and even Scandinavian — to find sweet, sour, spicy, crunchy, herbaceous, and acidic elements that work together. In the hands of a lesser chef, those kinds of cross-cultural mash-ups often seem forced or contrived. With Tien, it almost always feels organic, balanced, and, most importantly, delicious. As a bonus, he’ll often take overlooked or under-appreciated ingredients and make you see them in a new light. Read on to find out how Tien got me to rethink my life-long hostility to radicchio.

Another thing I love about Tien is he’s still on the line cooking (at least in between selfies with fans). Most chefs, once they reach a particular status, at least become expediters, working the pass as a final step in quality control. I was there one night when Tien was working the pasta station, cranking out his take on cacio e pepe. I watched him fill order after order, wrenching a big pepper mill within an inch of its life and then pan-flipping the mixture until it reached just the consistency he wanted. I sat there wondering where he got his egalitarian work ethic and why he doesn’t have forearms the size of Popeye’s.

I could go on, but before I get too fanboy (I know, too late for that), let’s get to the food. 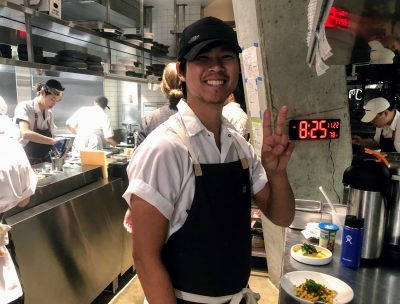 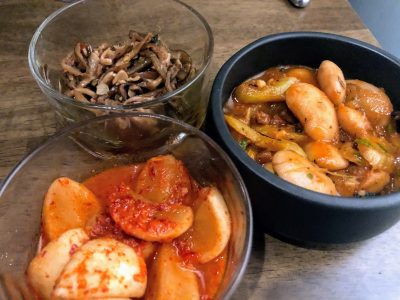 Tien is really into fermentation and pickling these days. In fact, he’s created a Pickles and Ferments Cart that a server wheels around with that night’s choices, sort of like Korean banchan to snack on while you’re thinking about the rest of your meal. This is also the time to order bread (go for the sourdough) with a selection of dips and spreads. By all means try one of the flavored butters like the Sichuan honey butter, but if you can run the gauntlet of dietary restrictions at your table, the best of the bunch is the chicken liver pate. 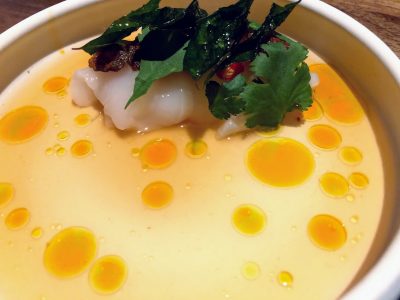 This won’t be a popular take, but I’m not a huge crudo fan. It feels like something that became ubiquitous when restaurant consultants discovered that customers would pay $15-$20 for a few gussied-up slices of raw fish. The margins on crudo must be astronomical. Having said that, Tien is known for his crudo dishes and I do enjoy his versions more than most. Here pristine scallops get help from a thatch of fried okra and curry leaves to create a clean and fresh-tasting starter. 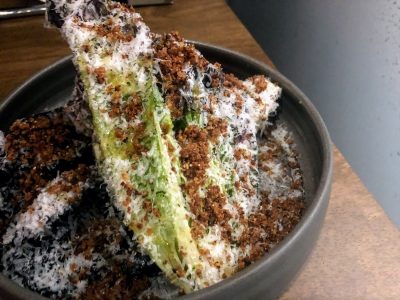 Tien’s take on a Caesar amps up the crunch by swapping out the usual croutons for a shower of breadcrumbs. I’d love to see Tien amp things up even more by adding some soft herbs or other elements. It’s a good salad, just not quite craveable.

Finally, an answer to my question of why radicchio is a thing. It often shows up as a pretentious pop of color on fancy serving trays to set off whatever you’re actually supposed to eat. But it’s not an ingredient I’ve given a moment’s thought to and I’ve never bought a head (stalk? pride? gaggle?) of radicchio at the grocery store. Tien makes radicchio the star of this dish, its slight bitterness melding with the sweetness of the teriyaki, the briny nuttiness of the furikake, and the yumminess of yum yum sauce. I’ll never bad-mouth radicchio again.

I’m torn about this dish. The components are all there, from the well-cooked sweet potato finished on the grill to the delicate pumpkin seed mole. But unlike other dishes, this one doesn’t feel like it’s more than the sum of its parts. It feels like something I might see at other Latin-focused restaurants around town. Still, if you like sweet potatoes, you won’t be unhappy including in your order. 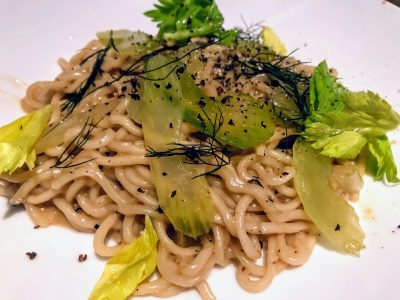 I almost didn’t order this on my first visit. A cacio e pepe knock-off with miso butter and celery but no cheese? Didn’t sound promising. But then I remembered a rice cake “gnocchi” that Tien served at Himitsu that also gave me pause. It turned out to be one of my favorite dishes of the year. So I took a leap of faith and, sure enough, it paid off with what may have been my favorite dish of the night. The noodles are a bit springy with good chew. The miso adds a bit of subtle umami while the cracked pepper and celery provide zing and vegetal punctuation. 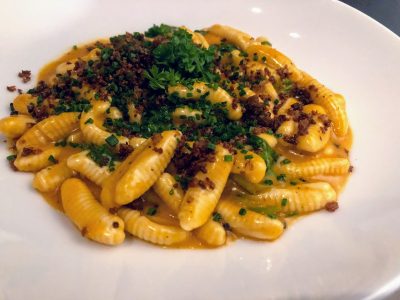 This looks like a pasta dish that could have a long Italian pedigree, but it’s sui generis. It’s creamy and spicy with toothsome pasta and crunchy breadcrumbs for texture. For those unfamiliar, ‘nduja is a spreadable, spicy salami. I have no idea what vegetarian ‘nduja is, but it tasted great. As your representative I probably should have asked, but I was distracted by my experiment into whether it was better to spear the cavatelli with my fork and drag it through the sauce or scoop it from underneath. (Answer: spearing and dragging — more sauce pick-up and more stable on the way to your mouth.) 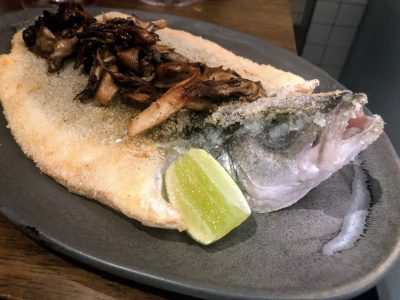 The menu at Emilie’s includes three large dishes meant for sharing. All are very good. They feed about two people each, so if you go with six people you can try them all. My friend and fellow food blogger Lori has started a campaign to keep this branzino on the menu after apparently a weak sales start. Thankfully, it seems to be working. The butterflied fish is still there, coated in toasted rice powder, fried, and topped with maitake mushrooms. What you can’t see here are the accompaniments — white rice, addictive ginger-scallion sauce, and the most wonderful little cup of dashi. You can spoon the dashi broth over the fish and rice, but I prefer sipping it with both hands like I’m afraid someone is going to try to steal it from me. 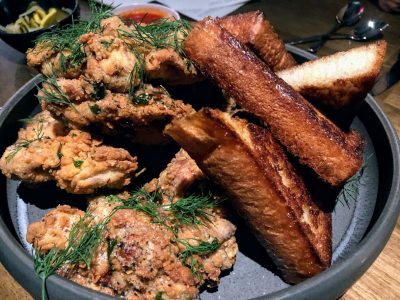 Even more than crudo, Tien is famous for his fried chicken. His Karaage fried chicken at Himitsu was a crowd favorite and then he opened — and still operates — Hot Lola’s spicy chicken sandwich stand in Ballston. So the question wasn’t really whether there’d be fried chicken at Emilie’s, but what kind. The answer turns out to be craggy, partially de-boned pieces flavored with ranch seasoning and fresh dill. It comes with hot sauce and ranch dressing to doctor the chicken and B&B pickles and Texas Toast to complete the whole Southern vibe. While it can be hard to distinguish between dark meat and white meat, that’s not really a problem since both are crunchy, hot and juicy. Each piece has a somewhat consistent thickness so you get a good ratio of meat to crust in each bite. 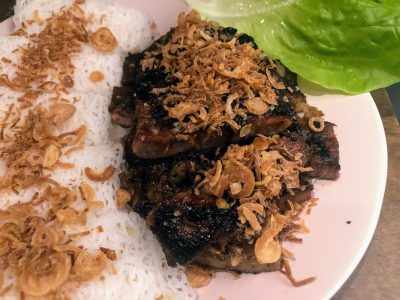 Tien himself acknowledges this dish is not all that different what you might find at an Eden Center Vietnamese restaurant, except with higher-quality meat. Wrap some grilled pork in lettuce with some rice noodles, herbs and pickled veggies. Like the other for-the-table dishes, there’s lots of room for personalization — someone who likes plain food and someone who likes complexity could happily share this dish. 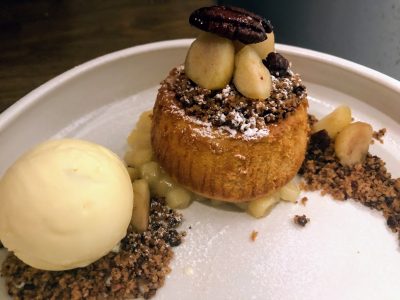 Dessert from Pastry Chef Willa Pelini comes two ways — things you can order right off the dessert cart, like fancy milk and cookies, and things you can order from the kitchen. If you have to pick one thing, resist the immediate gratification of the dessert cart and order this molten cake made with gjetost, a brown Norwegian cheese made from goat’s milk. I know, brown Norwegian cheese doesn’t sound like the makings of of a satisfying dessert. But gjetost gets its dark brown color from caramelized milk sugars, so it makes for a caramel-like molten cake that pairs beautifully with the apples, ice cream and crunchies. My daughter Emma, one of the premier dessert authorities I know, pronounced it nearly perfect.

So that’s Emilie’s for now. The “for now” is important because I have no doubt that it will keep evolving over time. Tien can’t help himself. He’s young enough and creative enough that he’s not ready to put out a Greatest Hits album yet. The excitement of eating at Emilie’s will be to see what’s on Tien’s mind. Indeed, the process has already begun. Just this weekend, Tien posted this picture on social media of mackerel curing:

I don’t think I’ve ever had cured mackerel and I can’t say that I’ve felt deprived. That makes it the perfect canvas for Tien. Because as soon as I get to eat whatever he’s concocting, I know I’ll wonder how I ever lived without it.