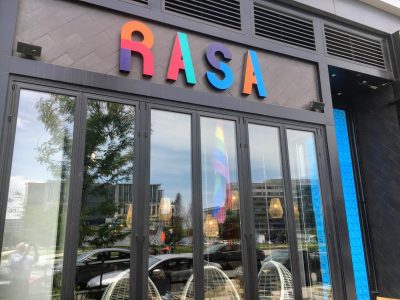 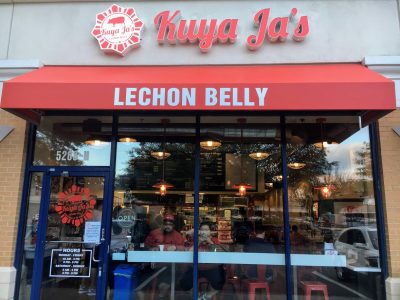 I’m not sure exactly what “fast-casual” restaurants are — other than you order from a counter like fast food but pay more than fast food — but this week I’m reviewing two home-grown ones, Rasa and Kuya Ja’s Lechon Belly. Both serve very good food and carry the flag for cuisines (Indian and Filipino) that are under-represented in the fast-casual space.

Rasa is the cool one, the place that seems to have it all together from decor to location to a business plan that’s clear as soon as you walk in. It aspires to be the Indian Chipotle. You don’t even need to read the rest of the review to have a pretty good idea what to expect.

Kuya Ja’s Lechon Belly is harder to get your arms around. It’s quirky and sometimes chaotic, with not enough seating to accommodate the line of waiting customers. It’s stuck in the back of a small strip mall near Shoppers’ Food Warehouse in Rockville that you can’t see from the road. Its business plan would get laughed off Shark Tank for its audacity (“Sharks, America is clamoring for a new fast-casual concept built around pork belly. Now who wants to “belly” up to the bar and “lech on” to this deal!”)

And yet, sitting here writing about them both, my mind keeps going back to Kuya Ja’s. Rasa is a terrific option if I’m down by Nats Park at lunchtime or need a quick bite before a game. But I’m not wondering what the line is like at Rasa right now. The fact that I’m even considering driving up Rockville Pike on a beautiful Saturday afternoon for anything other than a life-threatening emergency is remarkable.

But not everyone will feel the same. Kuya Ja’s is a more specific experience than Rasa and not as accommodating to a wide range of dietary and service needs. You can’t be line-averse or stressed out if a lack of seating forces you to eat in the parking lot or take home. And if you’re a vegetarian, you’re pretty much out of luck. Although to paraphrase My Big Fat Greek Wedding, they do have chicken.

Anyway, you can’t go wrong with either. Take a look below to see which fits you best.

Rasa founders Sahil Rahman and Rahul Vinod grew up together in Gaithersburg. Their families owned Indique in DC and Bombay Bistro in Rockville. The two worked in finance in New York City before coming back to DC in their late 20s to help freshen Indique and hone their idea for Rasa. Clearly Rasa owes a lot to Chipotle, Cava and Sweetgreen beyond the ordering process, from the industrial lighting to the concrete floors. While it feels familiar, the flavors and quality of the cooking keep it from becoming formulaic. Indian food is perfect for this format. It’s complex, colorful, and vegan-friendly. Best of all, the ingredients can be personalized in different combinations and still work. Of course, I said the same thing about ShopHouse, which I thought was going to be the Southeast Asian Chipotle, so what do I know. 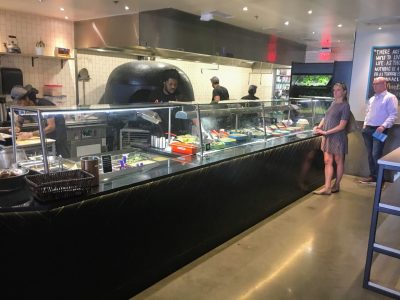 You know the drill. Choose a pre-defined bowl or make your own, starting with a base of greens, rice or noodles. 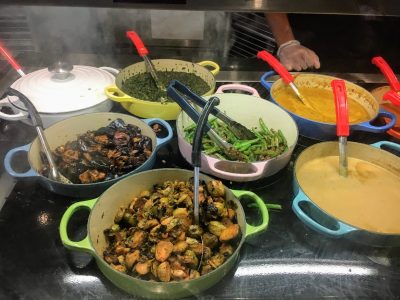 Then add a protein, veggies and sauce. The proteins are well-cooked, particularly the shrimp and the ground-lamb kebabs. Of the veggies, the eggplant and the green beans stand out; the Brussels sprouts are a tad dull and could use some more char or something else to liven them up. And the sauces are uniformly terrific, well-conceived with just a bit of heat. Bonus points for the colorful Le Creuset pots. 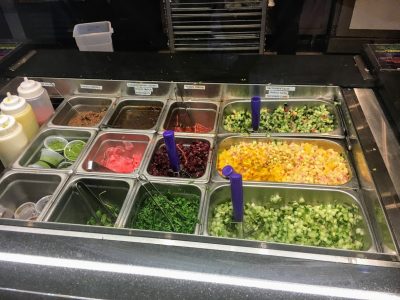 Finish your bowl with toppings and herbs. Kudos to Rasa for having both pickled onion and pickled radish — Rasa generally does a nice job ensuring pops of acidity — as well as the large container of freshly-chopped cilantro. Cava, take note with your pathetic little tub of shriveled mint. 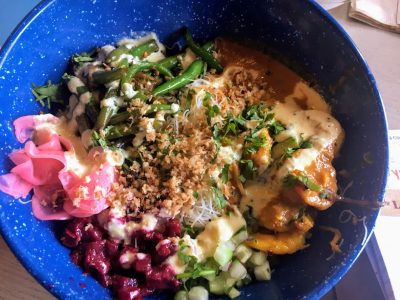 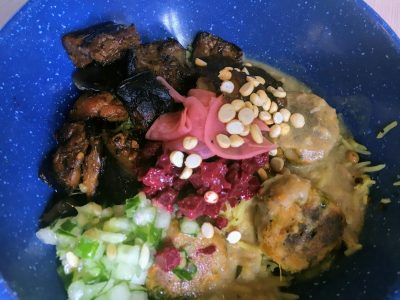 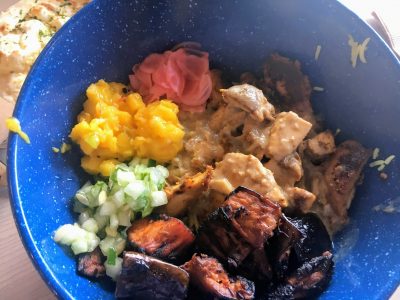 Make-Your-Own Bowl with Chicken and Eggplant 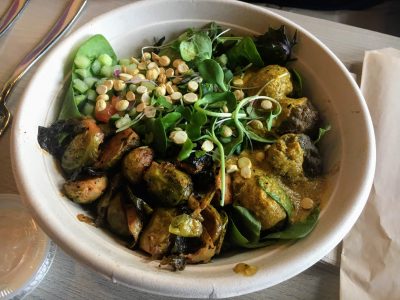 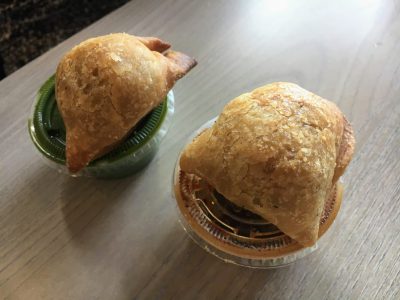 The samosas are fine but making them “mini” throws off the crust-to-filling ratio. There’s too little filling to support the crust. The dipping sauces help, but not enough. 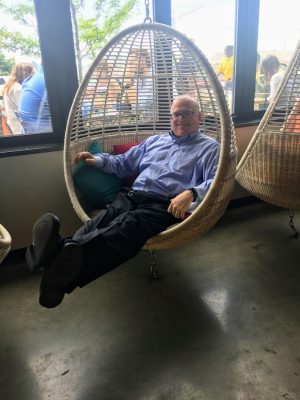 The worst attempt ever to relax in a basket chair. I look as tense as someone riding a mechanical bull. 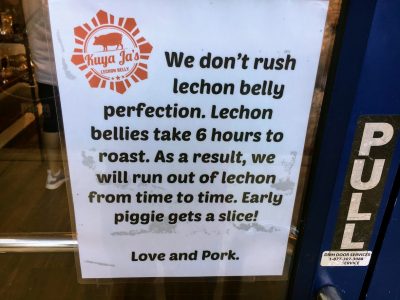 The sign on the door sets expectations early. This isn’t cookie-cutter food. When the meat they’ve made for the day is gone, it’s gone. Real-deal American barbecue places do it the same way. Franklin Barbecue in Austin, for instance, has a sign that simply says “Open 11 A.M. — Sold Out.” That isn’t a business model that easily scales to malls and airports. It’s just too unpredictable and labor intensive.

Speaking of business models, I guarantee that no focus group came up with the name Kuya Ja’s Lechon Belly. It’s too long, too hard to remember, and there’s not even a person named Kuya Ja. That’s just a combination of Kuya, the Filipino word for “big brother” and Ja, co-owner Javier Fernandez’s nickname. But who cares. You’re here for the food, not the marketing. I’m so in the tank for this place that the awkward name just makes it all the more charming. 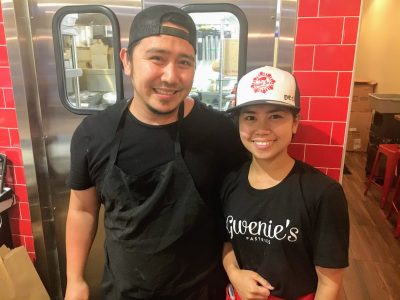 Chef and Co-Owner Javier Fernandez and one of the friendly servers. Chef Fernandez was born in the Philippines on the island of Cebu, known for its roasted pig. 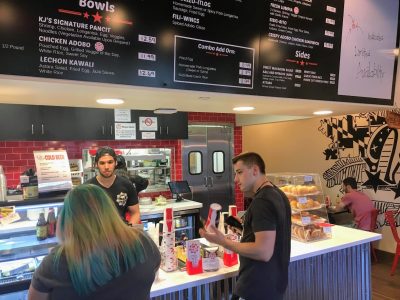 Order at the counter and pray there’s an open table. 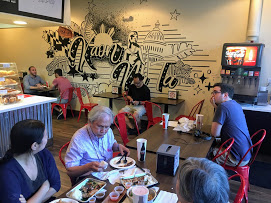 Luckily, at 7:30 pm on a Tuesday night, seating is available. That’s my son and food co-adventurer Daniel holding down the table (my wife Sonia gave it about .0063 seconds worth of thought before declining to join us for pork belly — hence Kuya Ja’s challenge and opportunity). 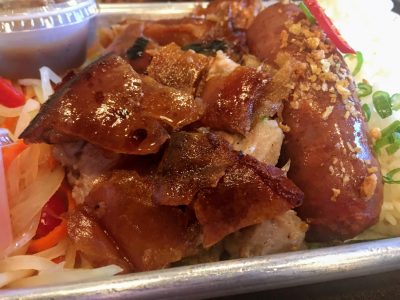 Lechon Belly (with a side of Longanisa sausage)

The star of the show. The lechon’s crisp, bronzed skin is the key. It shatters when you bite into it like pork brittle. The meat itself is unctuous but amazingly not fatty. Chef Fernandez explains that most places roast the pork 3-4 hours, which isn’t long enough to render the fat how he likes it. He roasts the belly at a lower temperature for a full six hours, until there’s just a little fat under the skin that melts into the meat when you take a bite. There are two sauces on the side: “Mang Tomas All Purpose Sauce,” which is made from pork liver, vinegar, palm sugar and garlic, and a yellow vinegar-based sauce. While most Filipino households use the All Purpose sauce for lechon, I prefer the vinegar sauce which gives the pork a Carolina tang.

You’ll also see I ordered a Longanisa sausage on the side because the plate didn’t feel meaty enough. I’m glad I did. The sausage is lightly sweet and delicious. 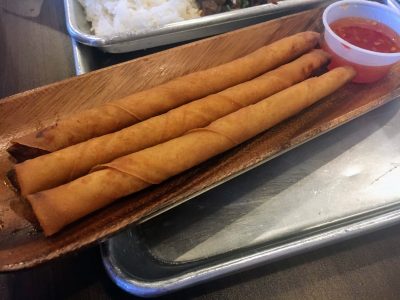 Lumpia with chicken, shrimp and veggies 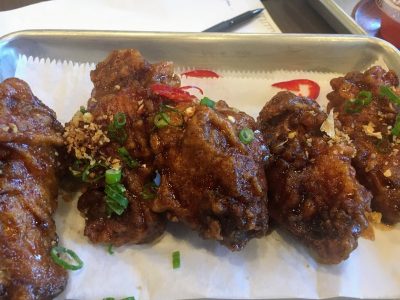 These meaty wings are so tender and easy to eat, they must be double-fried Korean-style. 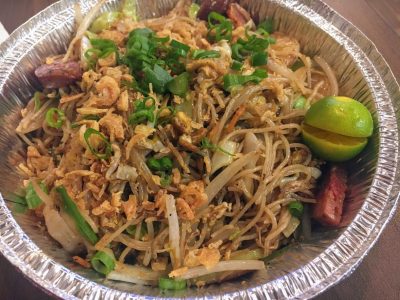 A nice noodle stir-fry with a lot going on to keep it interesting. I’m a sucker for anything southeast Asian with fried shallots sprinkled on top. 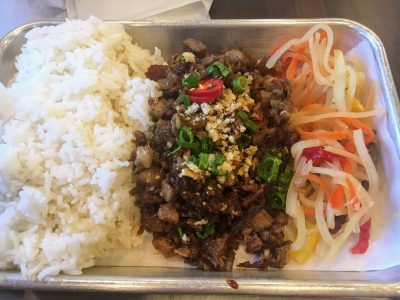 This is one of those dishes that can only have originated as an economical way to use of left-over scraps of meat. First you turn the edible bits of a pig’s head into a terrine, which is called head cheese although there’s no cheese involved. Then you cook that up with leftover belly scraps and innards. Add chiles, onion and egg and cook the whole thing until it crisps. I have no idea what the individual bits were that I was eating but they were delicious. 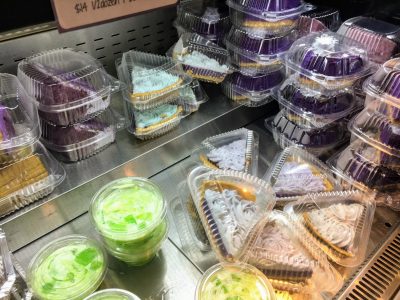 Chef Javier’s sister, Stella Fernandez, runs the wholesale bakery Gwenie’s desserts in Rockville. There’s a case of her desserts next to the counter, which just adds to the overall family vibe. 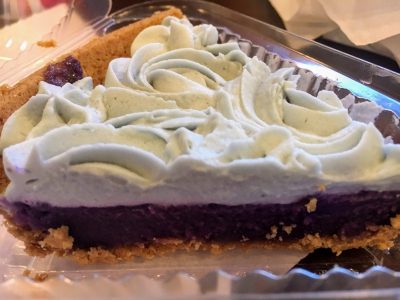 Not too sweet, kind of similar mouthfeel to a good sweet potato pie.

So there you have it. Two local fast-casual options, both very good in their own way.

It’s easy to see Rasa expanding to dozens of locations in the next five years. There’s no reason it can’t be done. If I walked into a food court with Rasa alongside a Cava, a Chipotle, a Beefsteak, and a Sweetgreen, I’d make a beeline for Rasa (and marry Sweetgreen and kill Chipotle).

Kuya Ja’s is a different story. Ideally, it would turn into a local landmark of sorts, a temple to a particular specialty that’s only available in a specific place under the auspices of a specific chef. It wouldn’t go wide but deep. Let’s just hope they squeeze in a few extra tables along the way.