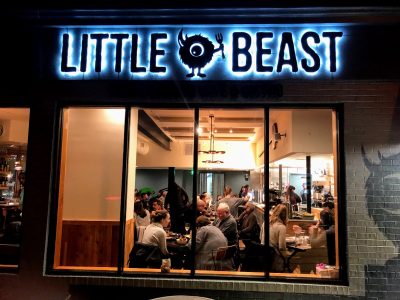 This is a review of Little Beast, not I’m Eddie Cano! But it’s almost impossible to talk about one without the other ever since they opened within weeks of each other on a stretch of upper Connecticut that badly needed them both. It’s like when 30 Rock and Studio 60 debuted the same TV season. They weren’t really all that similar but there was no way to avoid the comparison.

Let’s start with the names. Everything about I’m Eddie Cano! screams trying too hard, from the tiresome wordplay (the name supposedly sounds like an Italian speaker trying to pronounce “Americano”) to the demanding neediness of the exclamation point (geez, take it down a notch, no one’s saying you’re not Eddie Cano). Once you connect the name to the Italian-American concept it makes more sense, but it’s still slightly annoying.

The name Little Beast is indistinct. They could serve anything. Turns out, they mostly serve Italian food as well, but as you’ll see, they’re not too hung up on it. The name also evokes a sense of play and, sure enough, there are lots of little cartoon beasts lurking about that seem to be a cross between Minions, Where the Wild Things Are, and the Monster Masked Singer.

Some of those differences carry over to the dining experience. IEC is very specific. It’s mega-Italiano. The menu is divided into Italian-American and traditional Italian sections. The walls are adorned with pictures of Sophia Loren, the Coliseum and the Leaning Tower of Pisa. The waitstaff is heavily Italian. I’m pretty sure Dean Martin was singing Volare and Mambo Italiano on repeat over the sound system, but if he wasn’t, he should have been. As my wife said, it’s a whole thing. You could call it fun or transporting. But you’d be hard-pressed to call it relaxed.

But that’s exactly what I’d call Little Beast. It feels like a community center or someone’s great room, with the open kitchen in the back and the bar area in front. Come for dinner almost any day of the week and you’re likely to find a space teeming with families, empty-nesters and neighborhood friends catching up, all served by a t-shirted and diverse waitstaff. It’s a rare space of inter-generational commingling that even Norman Rockwell might find a bit schmaltzy. The one off-brand annoyance was a no-reservations policy when Little Beast first opened. Unlike IEC, which still has a no-reservations policy, Little Beast has fixed that pain-point and you can now reserve a table on Resy.

The food is very good at both. Try the fried zucchini at IEC — which I usually don’t order because it’s often leaden and greasy but here goes down like good french fries — and the calamari, meatballs, and eggplant/chicken parm. Note that the portion sizes are modest and the chef has a light-hand, so even if you shy away from ordering things like eggplant parm, you needn’t fear being presented with a massive brick of oily breading and cheese. (Of course, if you have a bigger appetite like me, you may also need to adjust your ordering and throw in an extra dish so you don’t leave hungry.)

Little Beast has a much briefer menu with a few familiar starters and then your choice of pizza and exactly four entrees (two pastas, mussels and short ribs). But while some may find the menu short, I think of it as “well-curated,” meaning just about everything is well-conceived and well-executed and there are almost no clunkers in the bunch (and a couple that are crave-worthy). Let’s take a closer look. 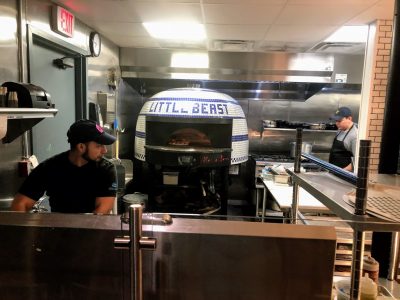 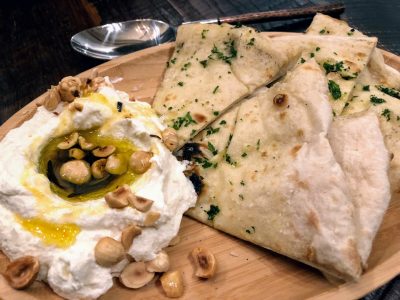 Excellent flatbread with fresh and creamy ricotta. An especially good order if you’re not doing pizza. 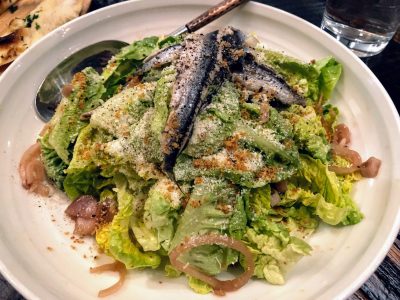 I hate when reviewers say a starter is enough for two to share. Usually I have no problem eating the whole thing and I end up being serving-size-shamed. So trust me when I say this is big enough to share. And it’s really good. Unlike some Caesar salads, it’s lightly tossed with a lively dressing given a little extra tang by the pickled shallots. And the crouton component is actually breadcrumbs, giving the salad a more consistent mouthfeel. (Now that I’ve used the term “consistent mouthfeel” in an actual review, I feel like Tom Sietsema should appear and give me a some wings…and maybe a side of blue-cheese dressing to go with them.) 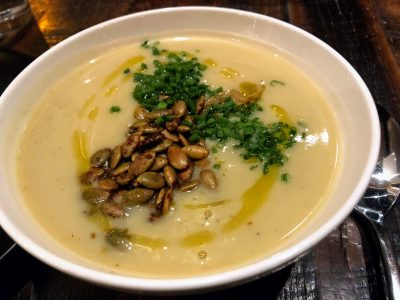 The curried pumpkin seeds do their best to add some zing to the somewhat dull puree but they can only do so much. 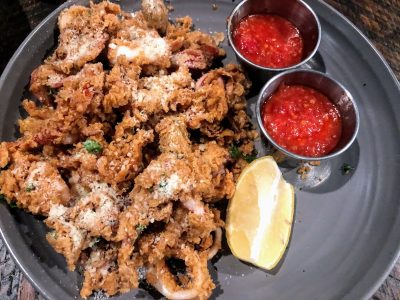 Fresh, hot and well-cooked. Would have been almost perfect but for the inexplicably cool pomodoro. 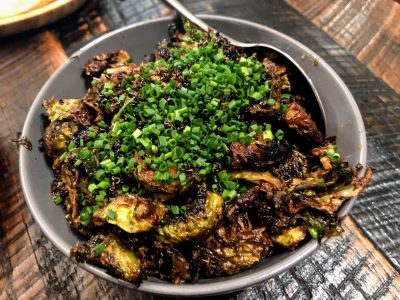 When exactly did Brussels sprouts become an appetizer and not a side dish? Another strapping portion size for the price, these sprouts are tender and tasty — and the vaguely Asian preparation shows that Little Beast isn’t doctrinaire about the Italian thing. My other thought was: did the Little Beast owner go long on chive futures? An enthusiastic hand with the chives is a recurring theme here. 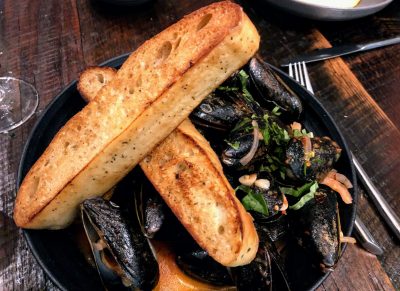 Delicious plump mussels with first-rate garlic bread in a tomatoey broth. The mussels do have a bit of a kick, so if you’re spice-averse be aware. 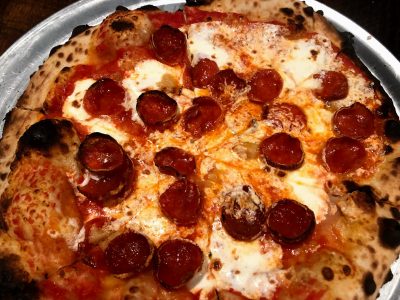 Ironically, the pizzas are not the kitchen’s strong suit. They’re fine but undistinguished. They do get better as you eat your way from the soft and uninteresting center to the crisper edge. Here’s hoping that the pizzas improve with time. 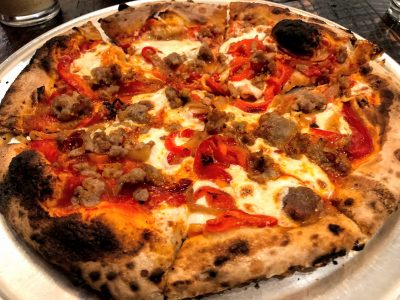 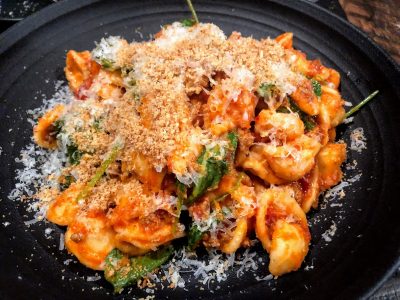 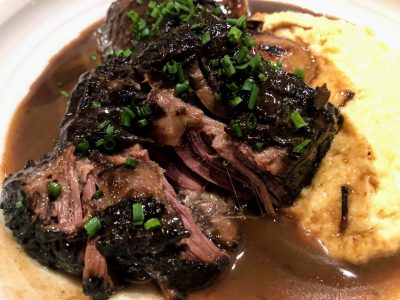 Oh lord, this dish is so good. Meltingly tender, luscious short ribs that are as good as any in town. Adding creamy polenta and onions (and a fistful of chives, naturally) rounds it into the winter dish of my dreams. The short ribs are the only entree on the menu over $20 and worth every penny. 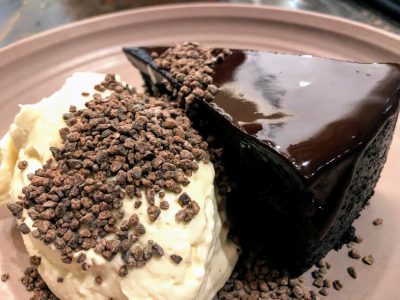 Don’t sleep on dessert. Although once you eat this classically decadent chocolate cake — Mary Berry would call “scrummy” — you may need a nap. And I’m pleased to report they serve it with plenty of whipped cream. I have no patience for little whipped-cream dollops that are little more than garnish. For a piece of chocolate cake, the serving of whipped cream (or ice cream) should be about 75% of the size of the cake so you can get the proper ratio in every bite.

I’ll be going back to both I’m Eddie Cano! and Little Beast, but for very different reasons. Date night with Sonia or friends? IEC. Dinner with the kids or a night that I just don’t feel like cooking? Little Beast. When I’m seeing a movie at the Avalon? Little Beast if I’m eating first, a toss-up if we’re eating after. A nice night when the weather warms up? Definitely Little Beast for its outdoor deck. My overall feeling is that IEC is a great addition to the neighborhood but Little Beast meets more of my needs.

ps. It may be a while before I have a chance to do a proper review of IEC, so in the meantime, here’s a picture of that terrific fried zucchini, the eggplant parm and the meatballs: 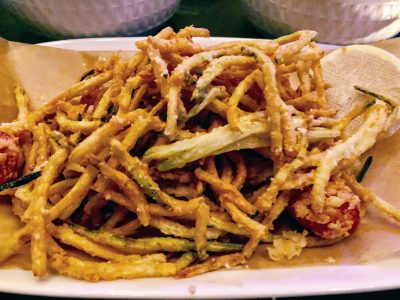 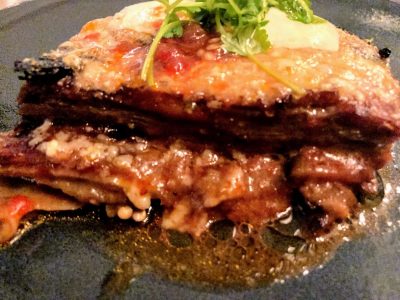 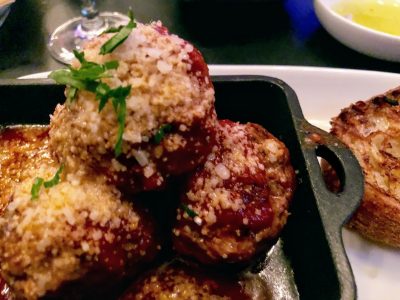 One Response to Little Beast — Where the Relaxing Things Are