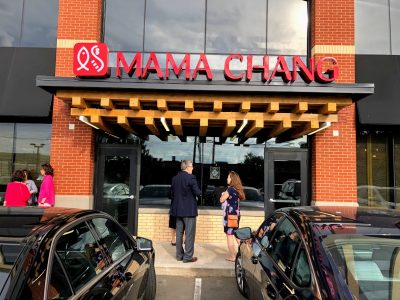 I just got back from dinner at Mama Chang in Fairfax. Let me start with the good news. Mama Chang is terrific. There’s a reason Tom Sietsema recently crowned it his #1 new restaurant in DC. While I may not place it quite that high, I have no problem putting it on the medal stand.

Mama Chang is the latest offering from the once-elusive Chef Peter Chang, who seems to have given up his peripatetic ways and set down roots in the DMV. His wife Lisa, an accomplished chef in her own right, developed much of the menu based on the cooking of the couple’s home province of Hubei in central China. While some of the dishes can provide heat, it’s not nearly as spicy as the Szechuan cooking that many associate with Chang. Hubei cuisine relies more on fresh ingredients and cooking technique than the Scoville scale.

My only problem with Mama Chang? It’s not in Bethesda.

That’s not a parochial sentiment, or at least not only a parochial sentiment. Let me explain. I live five minutes from Q by Peter Chang, which opened a couple years ago in Bethesda as the fine-dining “flagship” of Chang’s restaurant empire. I’ve been to Q maybe a half-dozen times hoping that I’d just hit a bad night or ordered badly — unfortunately neither of which turned out to be true. What is true is that Q’s unique high-end offerings are usually eclipsed by the humbler dishes on the menu like mapo tofu, kung pao chicken, and Chef Chang’s signature dry-fried eggplant, or the classic fine-dining options like Peking duck. That’s not surprising. Classic dishes — of whatever cuisine — evolve over time through trial-and-error. A single chef trying to reinvent the wheel may strike gold on occasion, but if you’re betting on deliciousness, put your money on generational wisdom.

If the humbler dishes are generally better than the fancy dishes at Q, and Mama Chang is nothing but humbler dishes, it seems inescapable that Mama Chang is better than Q. Which is odd if Q is supposed to be the jewel in the Chang empire’s crown. But don’t take my word for it. Go to Q on a Saturday night with no reservation and you’ll probably get right in. Try that at Mama Chang and you’ll have your choice of waiting with the crowd spilling out the front door or strolling across the parking lot to browse for plywood at Home Depot.

So why did Bethesda get stuck with the fussy flagship while Fairfax feasts on Mama Chang? I have no idea. Maybe Bethesda rents require higher price points, or maybe the idea of a “flagship” required something more ambitious than home cooking. Probably it’s just bad timing. Sort of like when the Wizards magically got the #1 pick in the 2001 NBA draft and the best player available was Kwame Brown. And then two years later, when players like LeBron James, Dwayne Wade, Carmelo Anthony and Chris Bosh were on the board, the Wizards fell to #10 and drafted Jarvis Hayes. Classic Wizards. Classic Bethesda.

But enough dwelling on what could have been. For now, let’s give Mama Chang her due. 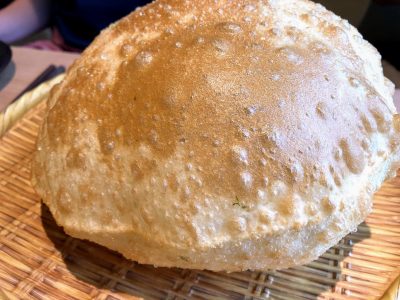 Anyone who’s dined at a Peter Chang restaurant will recognize his signature bubble pancake. Be sure to eat it quickly after deflating while it’s still warm. 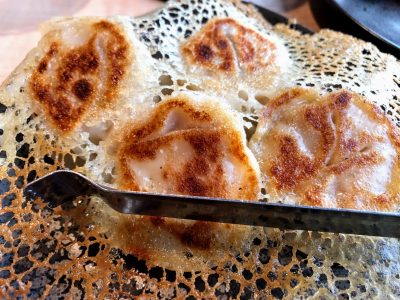 Delicate and well-cooked, but at $7, I’d trade the fancy latticework for a fifth dumpling. 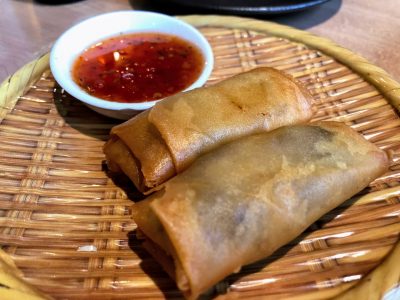 No complaints with what is basically a deep-fried roll of Peking duck. If for some reason you don’t order the actual roast duck — which would be a mistake — these are a good option. 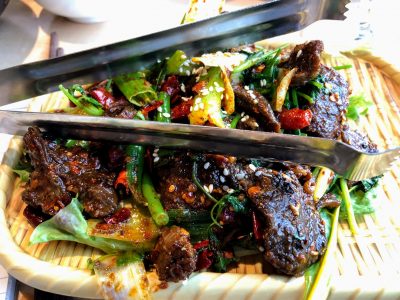 The manager on duty called these chewy and spicy beef chunks his favorite thing on the menu. They’re pretty good, but on the way out I wanted to suggest that he try the duck and the meatballs. 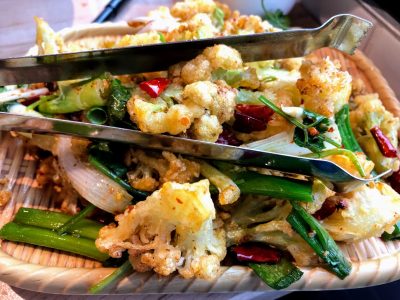 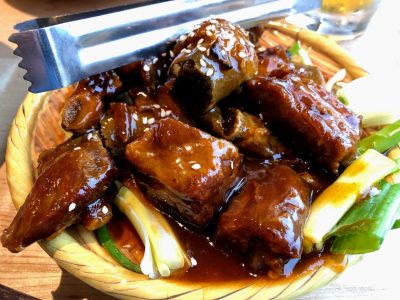 Tender riblets in a mild sweet-and-sour sauce that even the spice-phobic will enjoy. 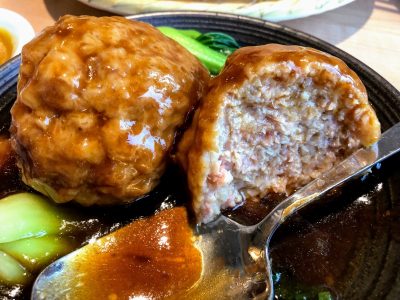 These meatballs are a delicious feat of modern engineering. They’re the size of a bocce ball but still impossibly light and delicate. I spent several minutes at the table poking and prodding but couldn’t figure them out. What gives them that fluffy texture? Whipped egg whites? The fluttering of fairy wings? 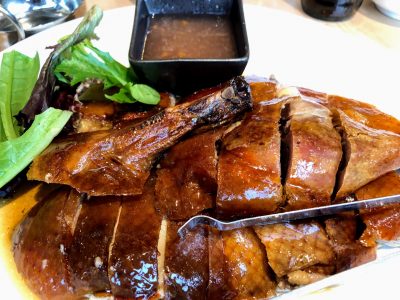 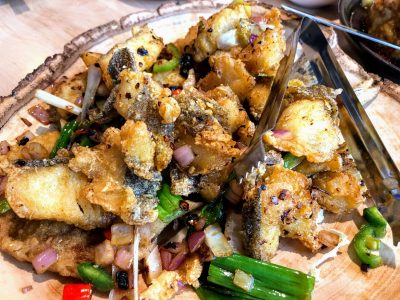 Flounder isn’t my favorite but this dish could convert me. Uber-fresh fish prepared somewhat similarly to the dry-fried cauliflower: a whisper of light breading, warm spices and a fistful of green onions and other veggies. 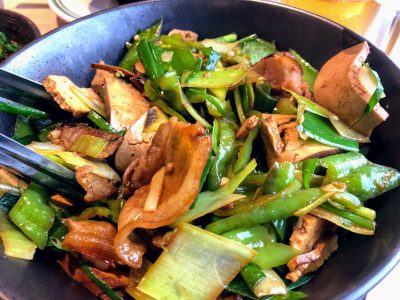 Give me a bowl of sautéed leeks and I’d follow you anywhere. So I’m somewhat biased about this dish, which turned out to be 85% leeks. Truth be told, however, the smoked pork belly and smoked tofu bring less smoke than expected to the party and prevent the dish graduating from good to great. 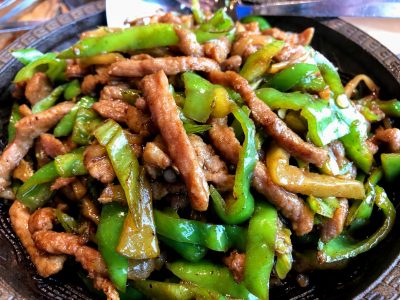 Not a bad dish but largely forgettable. The word “meh” comes to mind, although it’s not my favorite word. I don’t hate it, but I don’t love it either. I wish I could describe the feeling.

Those of us on the north side of the American Legion Bridge have a few choices.

First, we can stare in resentment across the Potomac, cursing the restaurant gods for not giving us a Mama Chang of our own. In the end, that option will only leave us embittered and full of second-rate Chinese food.

Second, we can schlep across the bridge and thank the gods for dropping Mama Chang somewhere in the DMV. This is practicing the art of gratitude and would be good for our mental health as well as our bellies. Indeed, it might even be an opportunity to better understand our neighbors to the south. Like why the beltway exits for 66 West and 66 East seem miles apart even though it’s a single road. Or what an elected official has to do to lose their job in the Commonwealth.

Third, you can join me in my crusade. I will cross the Potomac. I will happily eat at Mama Chang. I will learn absolutely nothing about Virginia while I’m there and each time act like Vasco da Gama charting a new trade route to India. Most importantly, I will neither curse nor thank the restaurant gods. Instead, I will appeal to their business acumen. The more Marylanders who make the drive to Fairfax, the sooner it may occur to them that they need to open a Mama Chang North. I have just the location.