Here’s how much I love Mexican food: I even like bad Mexican food. Set me in front of a sack of Taco Bell tacos and I’ll tear through them like Joey Chestnut on the Fourth of July. Or watch me repeatedly slink back into Rio Grande Cafe after swearing the place off because I need a fix and it’s so damn convenient.

You can imagine how I feel about good Mexican food.

This post takes a look at four Mexican spots in and around DC. They all scratch different culinary itches and meet different social needs. Whatever kind of experience you’re looking for, one of these should do the trick.

If you feel like tacos and don’t mind a bit of a schlep (at least for most of you), go directly to Taqueria La Placita in Riverdale. There’s no alcohol and nothing else on the menu to distract you. You can order whatever you want as long as it’s tacos. 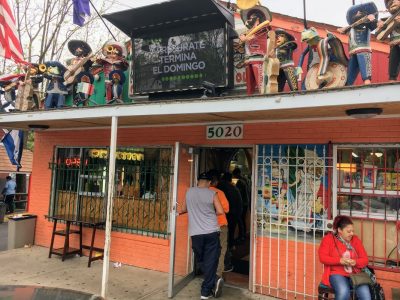 It doesn’t say Taqueria La Placita out front but you can’t miss the crowded parking lot or the riotous rooftop decorations. Get in line and place your order at the counter just inside the door. I usually go with familiar things like tacos al pastor, chorizo, carne asada or what they call pork leg (aka pork shoulder). Some day I’ll get the nerve to try the more ambitious “pork lips” or the even more exotic “meat head.” 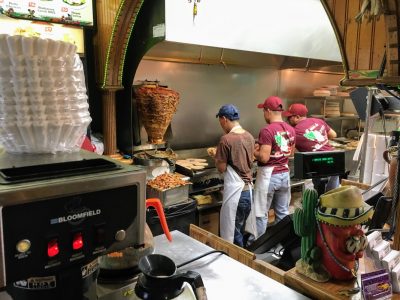 The vertical spit turning pork for the al pastor. Carved to order and absolutely delicious. 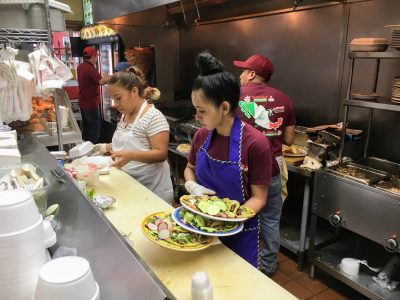 Take a seat and one of the waitstaff will bring your tacos to the table. Don’t ask how they know which food goes to which table. They just do. Some speak English better than others but all are accommodating. 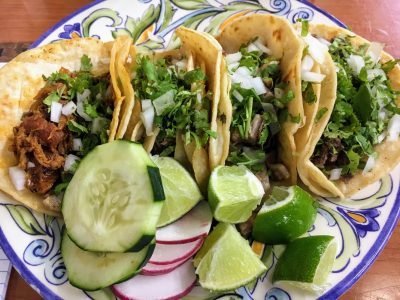 Whatever protein you order will be showered with cilantro and onions and accompanied by juicy limes, radishes, cucumber slices and three house-made salsas. A squirt of lime and a spoonful of green salsa and I’m good. The al-pastor is particularly fantastic and the pork leg is close behind. The only taco I haven’t been crazy about is the pork belly which was chockfull of weird bits that didn’t resemble pork belly at all. It could have been a language mix-up and I inadvertently ordered some type of offal.

Tortillas aren’t made in-house but are fresh and local with slightly crisp edges. 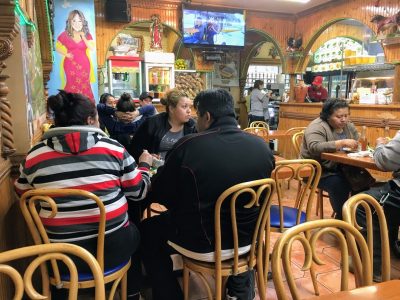 Indoor at La Placita is festive and full of families; outside there’s an adorable area with picnic tables if the weather is nice. 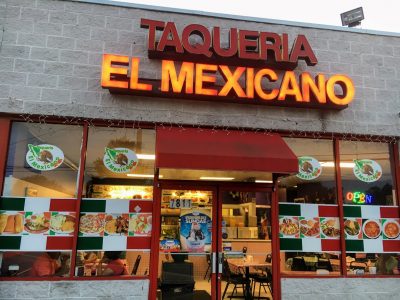 To say Taqueria El Mexicano is unassuming is an understatement. It has virtually no curb appeal, a cinder block hole-in-the-wall turned at a weird angle in a little strip mall on Riggs Road. Things don’t look any more promising when you step inside to a few tables and a single employee behind the counter taking orders. 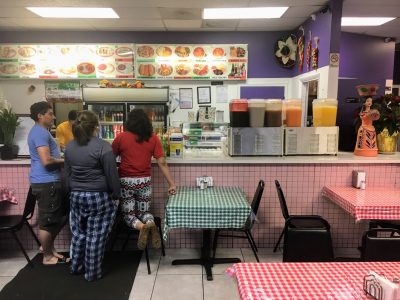 Once you order, the counter guy turns around and passes the slip through an actual hole in the wall, presumably to someone in the kitchen. I’m not 100% sure because you can’t see anyone back there and there’s no clanging of pans or other noise.

So you go find a table and wait a few minutes for your food to arrive. And when it does, it feels like magic, especially if you’re lucky enough to have ordered the Mole Poblano. 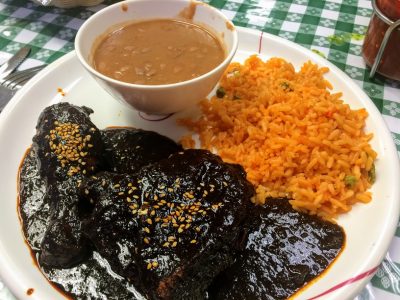 Lots of moles hit notes of dark chocolate, fruit, nuts and chiles. But unlike most of them, this one is perfectly balanced and more sauce-like than gloppy. Plus, they usually make it with dark meat so the chicken stays moist and tender. It’s my favorite mole — and one of my favorite plates of food — in all of DC, and for $12.50, a steal. 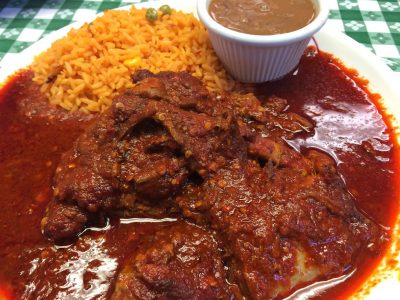 Pork Adobo is almost as good as the mole, spicy and savory without packing too much heat. 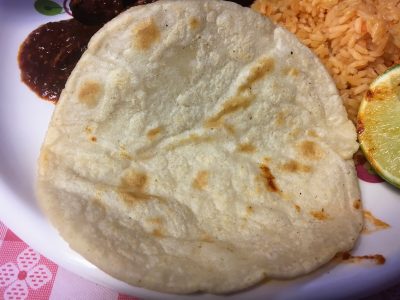 Be sure to ask for the house-made tortillas to sop up the mole or adobo sauce.

Tacos and posole are good at El Mexicano as well, but that’s not why you’re here. Stick with the bigger plates and go home happy.

The tricky part for me is finding people to go. It’s a bit closer than La Placita — only a mile or two from the DC border where North Capitol meets Missouri Ave — but with far less atmosphere. And again no alcohol. So if you see me there sitting by myself, pull up a chair. But bring your own mole. 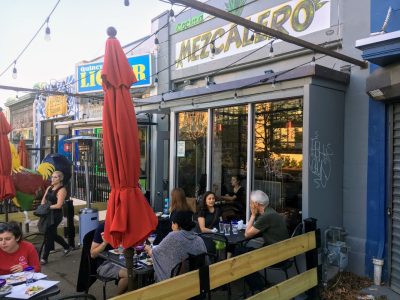 Mezcalero Cucina Mexicana is a good choice when you’re looking for a reasonably authentic Mexican spot and you or your dinner companions (1) want a menu with lots of choices, (2) want to drink, and/or (3) don’t feel like trekking to Hyattsville.

MCM was opened earlier this year by chef Alfred Solis and his sister Jessica, both of whom were born in Mexico City and also own the dependably good El Sol on 11th Street NW. 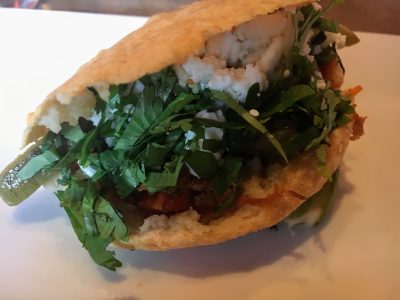 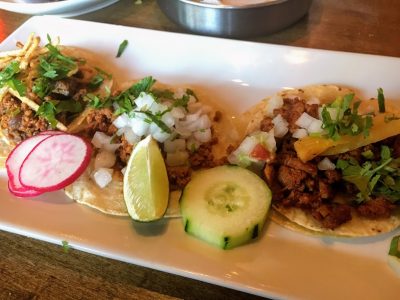 The tacos are very good, the al-pastor (right) carved from a rotating spit like at La Placita, although lacking some of the savor. My favorite taco may be the Campechano (left) which includes chorizo, steak, caramelized onions and shoestring potatoes. 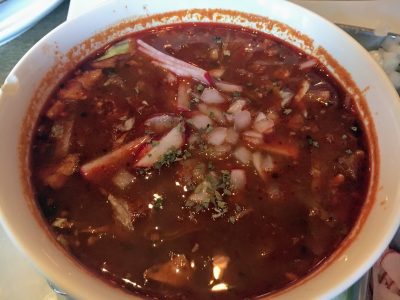 My favorite dish at Mezcalero Cucina Mexicana was this excellent posole, a broth amped up with guajillo peppers and chile de arbol and teeming with hominy and braised pork. 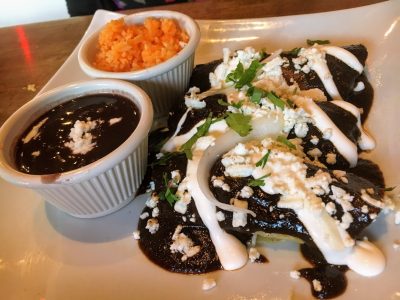 The chicken mole enchiladas were weighed down with a stodgy mole that lacked finesse. Unlike at Taqueria Mexicano, I didn’t look for spare tortillas or rice to mop up the sauce. 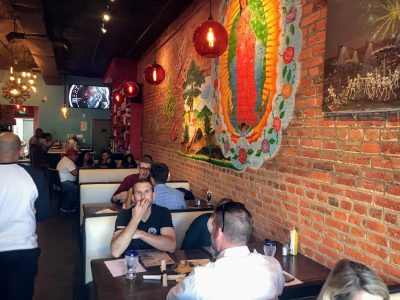 The room is comfortable but not fancy or custom-designed. Which is a good segue to the final restaurant. 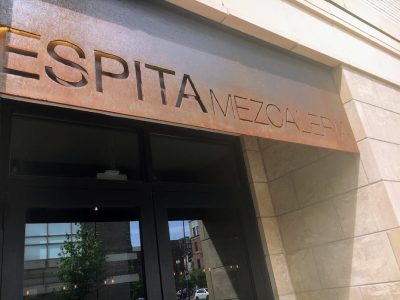 Let’s say you want a close-in, full-service Mexican restaurant like Mezcalera Cucina Mexcicana but with a tad more hipster pretension. I give you Espita Mezcalera. Take this description of the restaurant’s interior design on its website:

We worked with designer Rachel Aikens of Reid & Taylor Studio in New York City to create an environment that has a warm industrial interior that comes together with authentic Oaxacan art. The reclaimed wood drop ceiling, etched exterior sign, rolled steel bar surfaces, wood benches, bar stools, and host stands were all custom designed for Espita by Rachel at Reid & Taylor and fabricated by BLKWD Inc. of Brooklyn, NY. 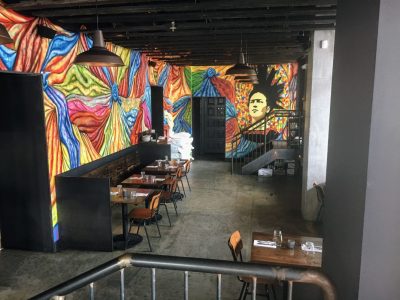 But that level of pretentiousness is nothing compared to the mezcal. The mezcal list runs to 11 pages and contains 99 separate entries. You literally could have a different mezcal every night for three months, and at the end of that time you could never talk to me again.

Josh is our GM and resident mezcal expert. He has studied mezcal so you don’t have to (and because he really geeks out over things like agave varietals, soil type, or the construction of a still). He is one of a few certified Master Mezcaliers in the world, which basically just means he will talk your ear off about agave if you let him.

I know what you’re thinking and you’re right. It’s worth calling ahead to make sure Josh isn’t working the night you’re there. 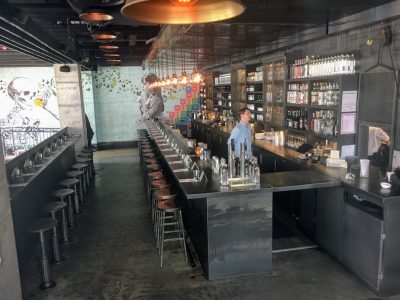 But just when you think you’re flat-out going to hate the place, the chips arrive and you can’t remember what you were annoyed about. 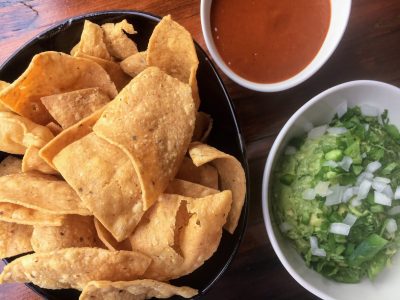 These are the best chips in town, hands down. They are thick and meaty and not at all greasy. They have the strong corn flavor of heirloom corn from southern Mexico that the restaurant cooks every night and grinds into masa every morning. It’ll cost you $3, which includes an unfortunately over-processed salsa. Instead, be sure to get the lovely $10 guacamole to enjoy with the chips. 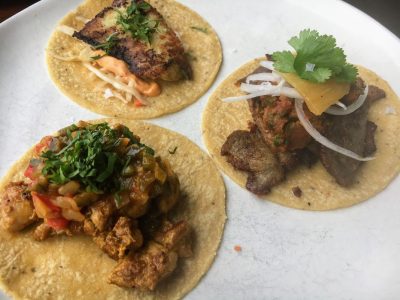 The tortillas for the tacos (here, chicken, tilapia and al pastor) are made from the same heirloom corn as the chips. The corn doesn’t shine as much in this form but the tortillas hold up with just a single layer (for the calorie or carb conscious out there) and the fillings are decent. At $6 each, however, they are about double the price of the tacos of the other restaurants on this list and not a great value. 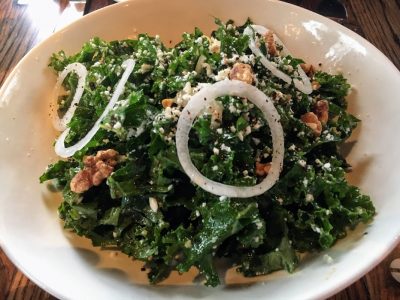 On the other hand, you won’t get a kale salad at any of the other restaurants on this list. And it’s a pretty good one, as kale salads go. 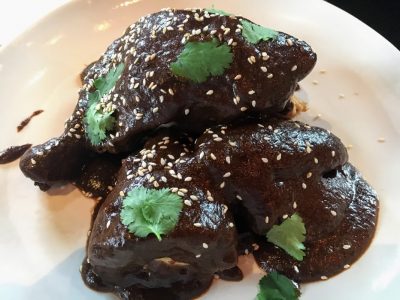 The mole I had a Espita was overly thick and somewhat flat-tasting. Not nearly as good as El Mexicano and again about twice the price. (To be fair, Espita many different moles and I haven’t tried most of them.)

So there you have it. Four very different places, four very different experiences. For tacos, try La Placita. El Mexicano for mole. Posole is the call at Mezcalero Cucina. And Espita for chips and guac. The latter two are probably more convenient for most of you and have full bars. The first two are more culturally immersive and have the dishes I most crave. And best of all, none of them are Rio Grande.