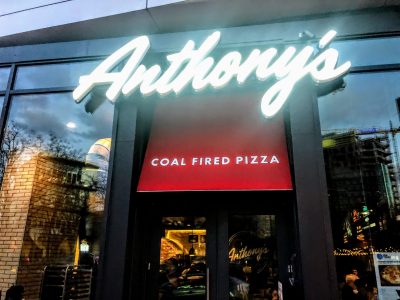 Since this is a mini-review, let me cut to the chase. The newly-opened Anthony’s Coal Fired Pizza is good. Not drive-thirty-minutes-out-of-your-way good, but solid-option-in-Bethesda-if-you-feel-like-pizza good. Given the state of Bethesda dining, that’s a big deal. Anyone who thinks otherwise is, as Joe Biden would put it, a lying dog-faced pony soldier.

My expectations going in were low. Anthony’s took over the old Community location, a space that’s sat empty for longer than Community was open. The space opens onto Norfolk but also runs along Fairmont, one of the more forlorn streets in Bethesda. The increasingly-weathered “Community” sign presiding over such a lonely landscape month after month felt like a painfully ironic curse.

So when I walked into Anthony’s around 5:30 pm last Friday, I fully expected to be the only customer in the joint. I even imagined how uncomfortable it would be to ask the host if they were serving because it wasn’t clear from the fact that others were eating. Imagine my surprise, then, when I opened the door and walked straight into a long line of customers waiting for tables. Huh? At 5:30 pm? Did I black-out and drive to Bad Saint? Luckily, I was dining solo and the bar is first-come, first-served. I shimmied my way into the last remaining spot. 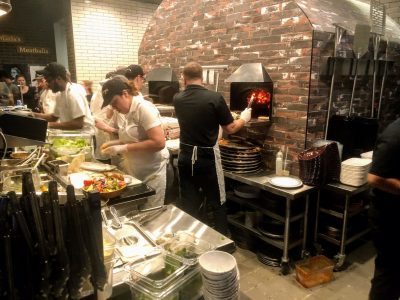 The coal oven at Anthony’s, fronted by a bustling squad of prep cooks. 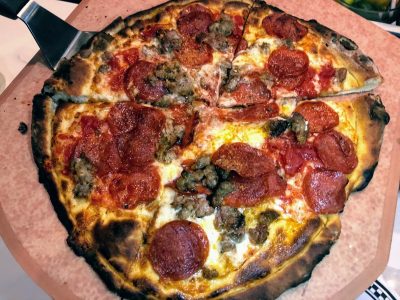 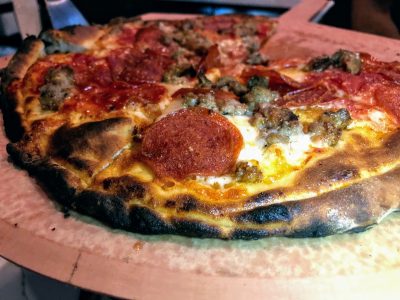 The pizza at Anthony’s is old-school. None of that Neapolitan floppiness or Detroit-style breadiness. It’s thin and crisp, with good char underneath and at the edges, where the smokiness from the coals is most perceptible. I can’t stand wan crusts and underdone toppings (especially underdone sausage or pancetta). That’s why I usually order my Neapolitan pies well-done. That’s not a problem at Anthony’s. You get plenty of delicious browning and a good melding of toppings and crust.

Don’t want pizza? They also have chicken wings roasted in the coal oven, salads, meatballs, and sandwiches, none of which I tried (except for the house salad below, which was also old school and, as you’ll see, a very good deal). 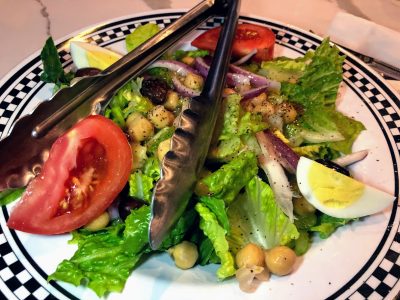 One of the reasons the bar was so packed was the happy hour specials from 4-7 pm. For $5, you can get this house salad, chicken wings, or a 10″ pizza. If you’re seeing a 7 pm movie at Bethesda Row, this is a great place to grab a glass of wine, a salad and a pizza or some wings. You’ll be out $15, which is about what my salad order costs me at Chop’t.

Anthony’s won’t crack my list of top pizzas in the DMV. Frankly…Pizza!, Inferno Pizzeria Napoletana and Timber can rest easy. But if you find yourself craving pizza in Bethesda and just can’t get excited by another Neapolitan pie at Alatri Bros or Da Marco, Anthony’s may be just the ticket. It’s rustic. It’s comforting. It’s an unapologetic throw-back. And it just may bring community — small c — back to that corner of Bethesda.

(You can also order from Anthony’s on Doordash and Ubereats.)