If you want to eat at Tiger Fork, the new Hong Kong-style restaurant in Shaw, you first have to acquaint yourself with Blagden Alley. 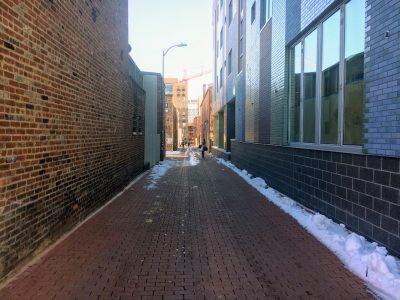 First-time visitors can be excused for wondering if they’re in the right place. Entering the Alley from N Street between 9th and 10th, this is what you see — not much. No signs to point the way or other outward indications that you’re on the right track. 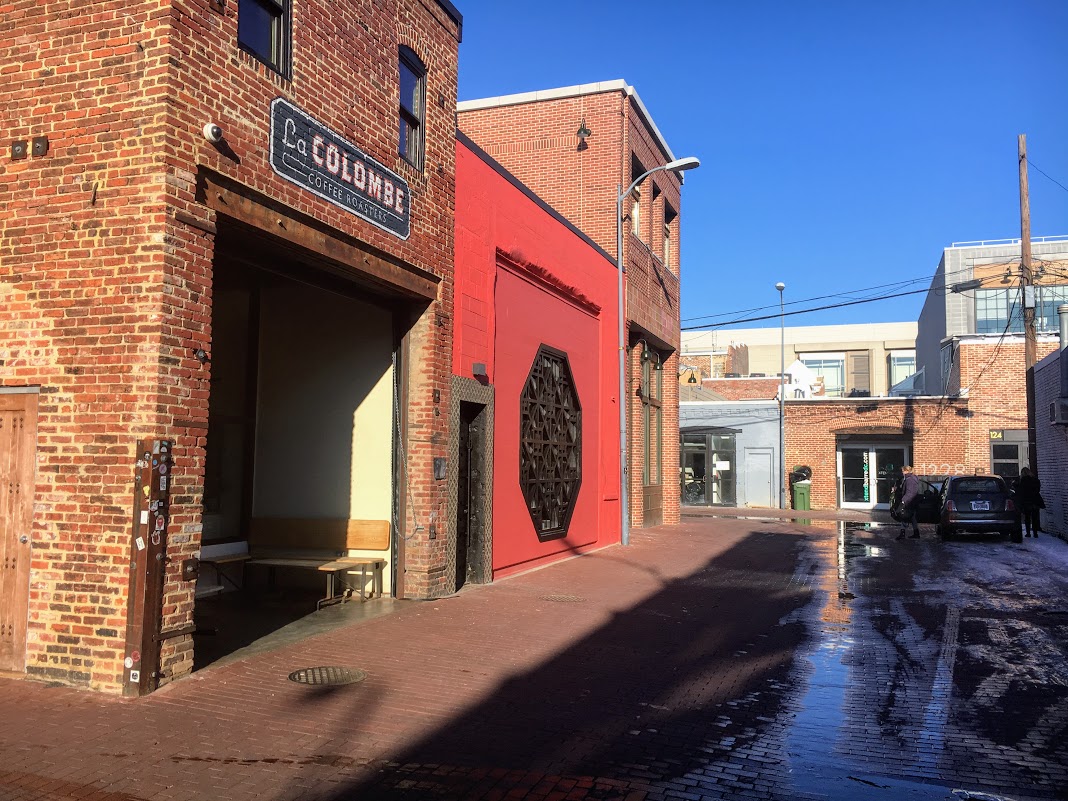 Then you take your first left and a little world suddenly opens up like a cozy Italian piazza. All it needs is a church. You can get a good cup of coffee and hang out at La Colombe. Or stop for a drink at Columbia Room. Or if you’re looking for some great cooking, The Dabney — one of the top-five “it” restaurants in DC right now — is straight ahead and to the right. Less than a month ago, Tiger Fork joined the party in the old Rogue 24 space, its splash of red paint and large octagonal window announcing its presence sans signage. 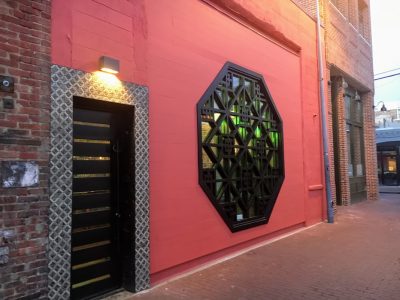 There’s clearly something psychologically appealing about the whole experience — the nondescript alley, the hidden world, the plain store fronts belying the crowded conviviality within. It’s the allure of the speakeasy, of being in-the-know, of belonging to a exclusive club that shuns the hoi polloi like the casual strollers-by and the committed valet parkers. 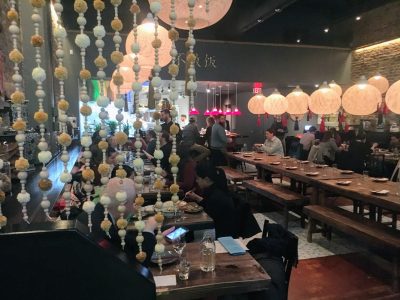 Tiger Fork’s interior has been reconfigured since its Rogue 24 days when the kitchen-in-the-round was smack dab in the middle of the room. The kitchen has been moved to the back and long communal farm tables now run down the center. 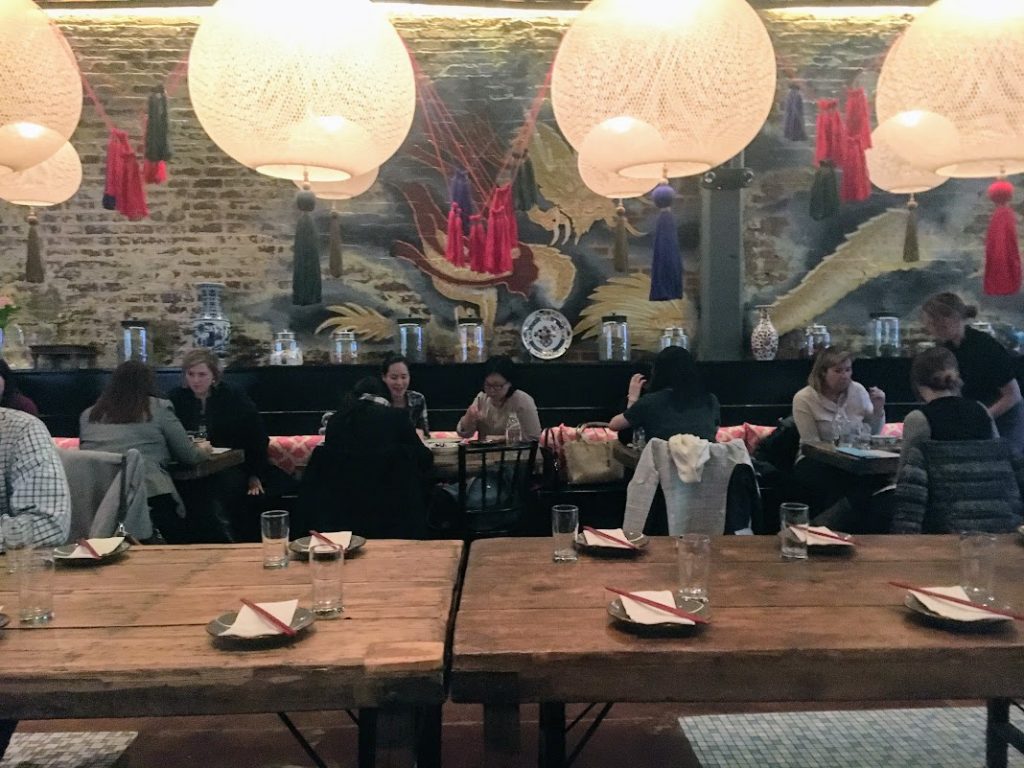 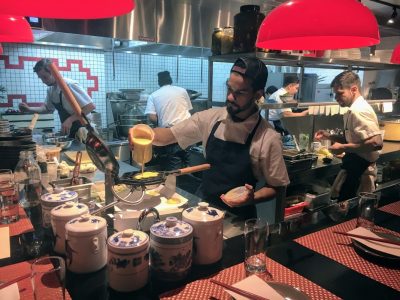 The open kitchen includes a station for making bubble waffles. More on that later.

So how’s the food? It’s very good if you come with the right expectations. Tiger Fork is not for those who like their Chinese food to pack mouth-numbing heat. Even the dishes featuring chilies are mild enough for the spice-sensitive to share. Nor is it for the traditionalists. While some dishes resemble classic Chinese dishes, they are more like jumping off points than templates for imitation.

The one group that will be happiest at Tiger Fork? Umami-heads. Umami, as everyone has heard by now, is the “fifth taste” recently recognized by western scientists (after sweet, salty, sour and bitter). It’s found in foods with certain glutamates like cured meats, fermented vegetables, smoked seafood, soy sauce, fish sauce, cheeses (particularly parmesan), ripe tomatoes and mushrooms. Combining multiple umami ingredients in a single dish actually creates a force multiplier greater than the sum of its parts: an “umami bomb.” I don’t think of Tiger Fork as a Chinese restaurant. I think of it as a little umami munitions factory. 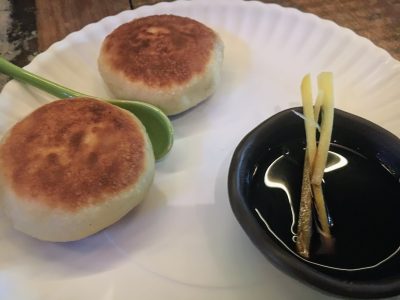 These buns are an excellent way to start, their beautifully crisp exteriors giving way to light, perfectly-even breading. What’s most remarkable, though, is the meat. It’s softer, redder and more unctuous than most beef. You’d almost swear it was raw but it’s not. According to our waiter, that’s what meat from a dairy cow looks like. If so, we’ve been totally misusing a precious national resource and we all need to switch to almond milk immediately. 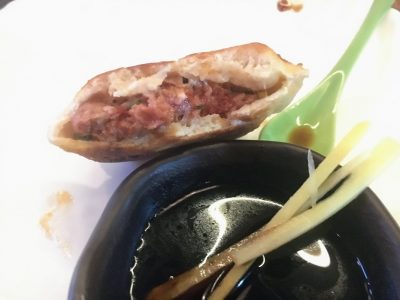 Here’s a not-great shot of the pinkish dairy cow interior. It has a little heat and enough juiciness that you almost don’t need the dipping sauce. 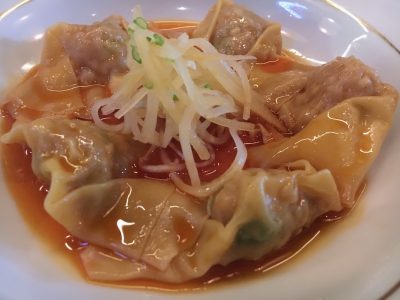 Humble Plate of Chili Wontons with turkey, shrimp and ginger

Nicely supple noodles which ought to carry more of a chili oil punch. I also question whether the ground turkey is an improvement from the more traditional pork. 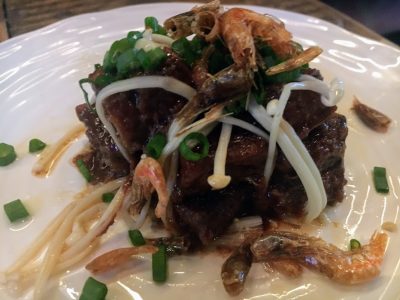 Perhaps my favorite dish of the night. It starts with meaty little squares of fried turnip cakes covered in XO sauce made from ham, dried scallops, dried shrimp, onions, garlic and chili peppers. (In my mind, XO sauce should be ranked among the world’s great sauces and culinary students should be tested on it like a hollandaise.) That base is then topped with pickled mushrooms for some acidic earthiness and dried shrimp for crunch. In other words, it’s fried umami in umami sauce topped with pickled umami and umami bits. Boom. 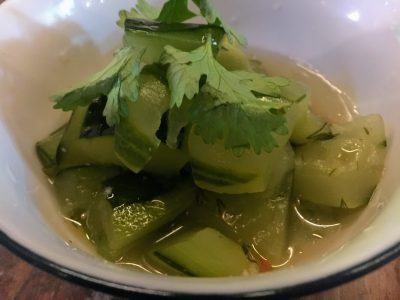 I’m a sucker for a smashed cucumber salad. This one is more vinegary than many, the addition of dill providing the vibe of a sweet-and-sour Asian pickle. There are other versions in town I prefer — the spicy cucumber salad at Momofuku comes to mind — but this one does a nice job of acidic palate cleanser. 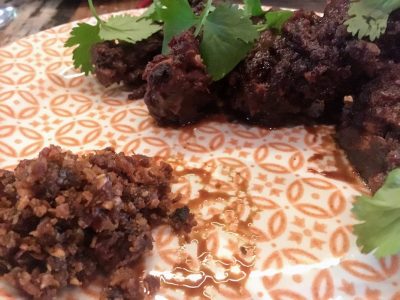 Here’s a good example of the Tiger Fork philosophy. Cook some pork ribs until they’re falling off the bone. Slather them in a thick layer of savory goodness that takes the pork to the next level. But don’t stop there. Send the ribs out with a small pile of Happy Lady Spice (a mixture of shallots, garlic, black bean and chilies) for the diner to add at the table. Because when it comes to umami, there’s no lily that can’t stand a little gilding. 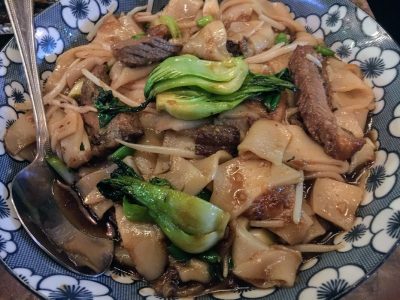 These are some terrific rice noodles, gelatinous but not gummy and slightly smoky from the wok. The baby bok choy also adds welcome texture and color to the dish. The brisket is ostensibly the innovation here, but like the ground turkey in the wontons, I’m not a huge fan. It’s slightly drier than the traditional beef, and given that it’s pre-cooked, it doesn’t pick up much char in the final cooking process. But the rest of the dish nails it. 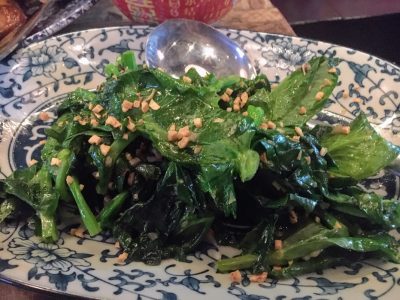 The pea shoots were fresh and not overcooked and provided a nice foil to some of the heavier dishes.  A house-made oyster sauce — from Virginia oysters! — is served on the side but isn’t really needed. 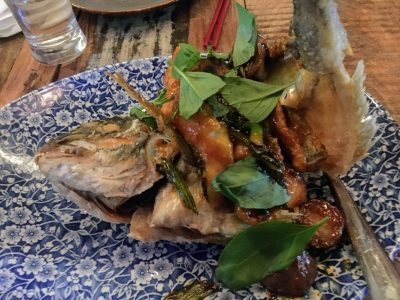 The dourade is filleted before cooking, the fish cut in chunks, deep-fried and then piled back onto the fish skeleton for serving. The technique makes the fish much easier to eat and produces billowy, well-cooked pieces. The sauce in which the fish pieces are tossed is slightly sweet and could have used a bit more acidity or heat. Unfortunately the eggplant chunks were slightly underdone and, as everyone knows, there’s no vegetable that needs to be cooked all the way through than cottony eggplant. 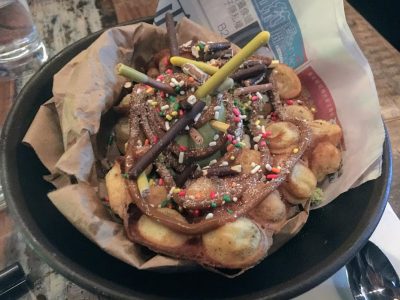 The bubble waffles are served warm, with a texture more like mini pancakes than waffles. The coolness of the green tea ice cream works well with the waffles and the little chocolate sticks tasted like Juicy Fruit gum. It’s a kitschy, messy and fun finish.

Overall, Tiger Fork is a promising work in progress. They’re still honing the menu and plan to launch a weekend dim sum brunch in the near future. But they already have some terrific dishes to build on, starting with the dairy cow buns, the turnip cakes and the chow foon. If you go, start with those and build your dinner from there. And rest assured that, whatever you order, you’ll leave with 100% of your daily recommended allowance of umami.

2 Responses to Mooning Over Umami