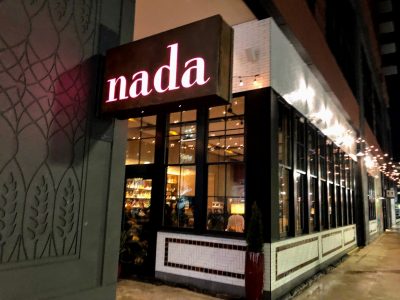 I was a kid when Chi Chi’s opened its first restaurant in 1975 in my hometown of Minneapolis. They billed themselves as the “Home of the Chimichanga” and served fried ice cream for dessert. I’d never heard of, let alone eaten, such exotica. It clearly had to be the most authentic Mexican food ever. Chi Chi’s was quickly followed by El Torito, which opened blocks from my home and which my high school friends and I favored mostly for the frozen strawberry margaritas and because they didn’t card.

Those first outposts of what I’d later know as “Tex-Mex” are now largely gone. Chi Chi’s exited the US market after a 2004 food poisoning outbreak in Pittsburgh (although you can still find their products in stores after the brand was bought by Hormel). But “second wave” Tex-Mex is very much still with us. I’m talking about places like Cactus Cantina, Austin Grill and Guapo’s, many of which were born in the ’80s and ’90s when American palates were growing more sophisticated and simply throwing different combinations of tortillas, meat, lettuce and cheese on a plate wasn’t any longer going to cut it. So they fired up the grill and focused on more upscale fare like fajitas and carne asada.

There hasn’t been a real “third wave” of Tex-Mex restaurants, at least not locally. Very few new Tex-Mex spots are opening and the ones we have largely stay out of the news — unless you’re Uncle Julio’s in Bethesda and Kellyanne Conway walks in the door (if you don’t know, Google it).

Nada may be a harbinger of things to come. It wants to be Tex-Mex 3.0.

Take the steak fajitas. At most 2.0 Tex-Mex places, steak fajitas come out on a sizzling metal platter. A lot of people love that sound of meat-on-metal but it raises my hackles — and my doctor says I need to watch it because my hackle levels haven’t been great. To me, a sizzling platter means my steak is still cooking! It may have come out of the kitchen a perfect medium-rare but it could easily cook to medium-well before the plate cools down. And don’t get me started on the veggies. Too often they’re clumsy chunks of onions, bell peppers and whole jalapeños that are only half-cooked and seem thrown on the plate to make the protein look less lonely.

Now consider Nada’s version (you’ll see it later in the post). Nada serves a high-quality skirt steak cooked to a rosy medium-rare. And it’s served on a ceramic plate, so medium-rare will stay that way. What’s harder to see is that underneath the steak are deeply-caramelized veggies — not just bell peppers but poblanos too — that add soft, roasted notes when scooped onto a tortilla with the beef and accompanying chipotle crema and chihuahua cheese.

So here’s my completely arbitrary schema: Tex-Mex 2.0 departed from Tex-Mex 1.0 by relying less on lettuce, cheese and refried beans and moving to more grilled meats. Tex-Mex 3.0 departs from 2.0 by using more Mexican ingredients and upping the ante on food quality and technique. And how does a 3.0 restaurant differ from a straight Mexican restaurant as it incorporates more Mexican ingredients? If its house specialty is fajitas, it’s still Tex-Mex in my book. And if they also offer a loaded nachos appetizer, it’s a no-brainer. 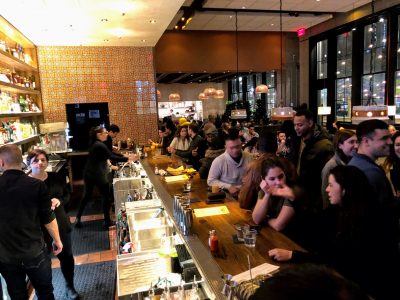 The bustling bar area. You can eat in here if you want lots of company or join me in the quieter dining-only area closer to the kitchen. 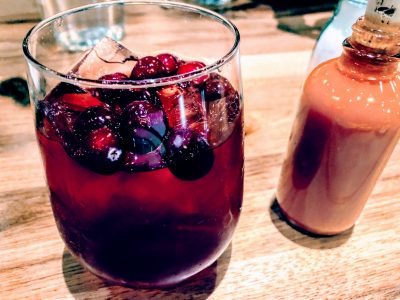 Sangria Rioja. The addition of fresh cranberries provides a nice hit of acidity to cut the sweetness. 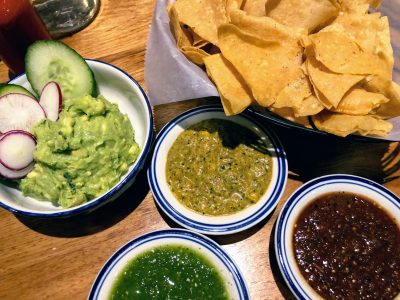 Nada does an excellent job on the chips, guacamole and trio of salsas (from bottom left: tomatillo verde, habanero kreeper and fire-roasted tomato ancho). Unlike many 2.0 places with indifferent salsas, these are fresh and vibrant (the habanero kreeper is particularly good). And the attentive servers are dangerously eager to refill the basket when it runs low. 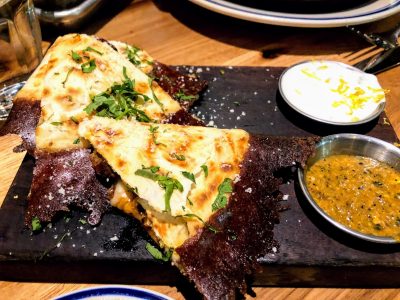 Crispy Skirted “Saganaki” Quesadilla. There’s nothing better than burnt cheese. Nada intentionally creates a burnt-cheese halo on their quesadillas by letting the cheese ooze onto the flat-top. Another small upgrade that makes a big difference. 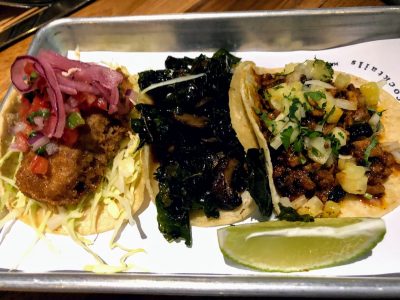 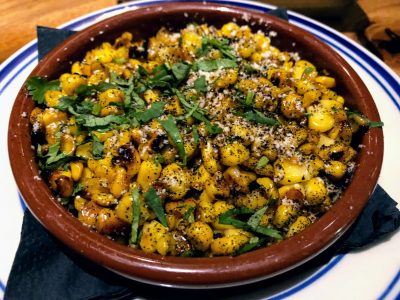 Wood-Grilled Corn Elote with chile mayo, cotija, lime and cilantro. Corn may be out of season but this side dish got licked cleaner than the peanut butter I used to try and catch that annoying mouse in our basement. Ok, maybe not the most appetizing analogy. 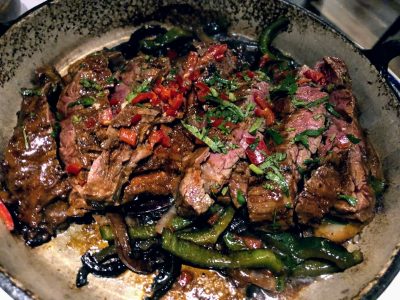 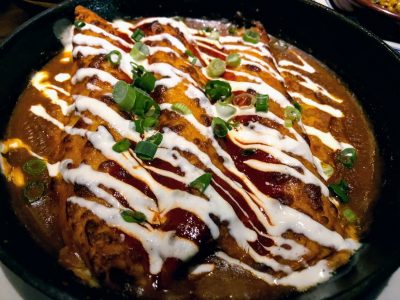 Braised Chicken Enchiladas with sweet corn, black beans and chihuahua cheese. The only real miss of the night. The use of flour rather than corn tortillas gives these enchiladas a wet-burrito feel. Not bad if you like wet burritos but not really my thing. The irony is that if they’d deep-fried the tortilla before ladling the sauce on top, it would have been a chimichanga (and I would have developed an immediate craving for fried ice cream).

There should be a law that after three baskets of chips they don’t even bring you a dessert menu. But they did. Looking around the room, a lot of people seemed to be eating the churros. Thankfully, I’m not a huge fan. Churros are typically made from choux pastry, which is also used for things like French crullers, eclairs and beignets. None of those are terrible, especially when eaten warm, but IMHO occupy a position well below doughnuts in the fried-dough pantheon. So I politely declined, pushed back from the table, and left feeling like I’d shown the kind of ascetic eating discipline that just won Tom Brady a Super Bowl.