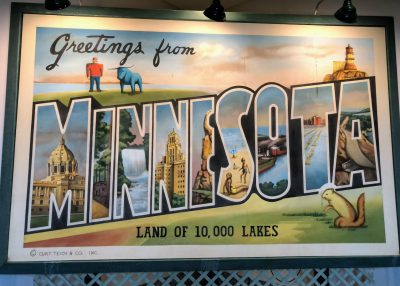 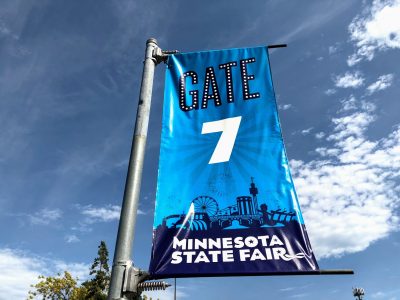 Disneyland bills itself as the “happiest place on earth.” And yet I’ve never heard anyone say the food at Disneyland was amazing. Ipso facto, not the happiest.

By contrast, take the Minnesota State Fair, which takes place in St. Paul during the twelve days leading up to Labor Day. There are lots of rides, crafts, animals, and the latest farm machinery. It’s Coachella for nice people. But that’s not what drew over two million visitors this year and keeps me returning again and again whenever I can. It’s the food. 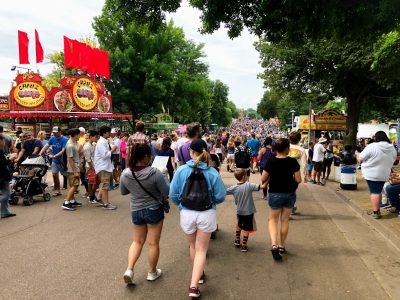 The Fair is probably best-known for its food gimmicks. Every year they come up with more things to deep-fry and/or put on a stick. 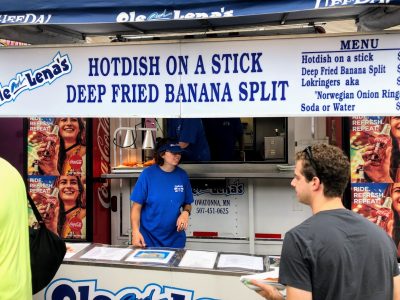 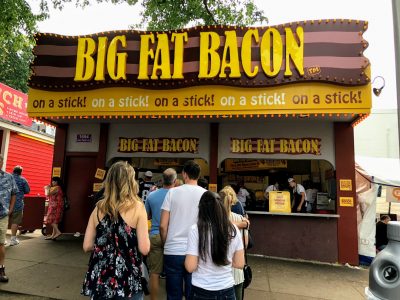 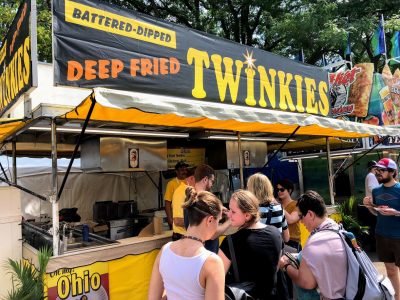 Those are fine for bragging rights but they’re not the best of what the Fair has to offer. Here are my top ten.

I don’t care what else you eat at the Fair, or if you eat nothing else at all. You have to eat a corn dog. And by corn dog, I mean “Corn Dog.” Don’t be fooled by booths selling pronto pups or hot dogs on a stick. They’re cruel imposters. They cut their batter with too much white flour. The Corn Dog booth uses a batter that’s almost all cornmeal and hugs the hot dog perfectly in its crispy-moist-corny embrace. 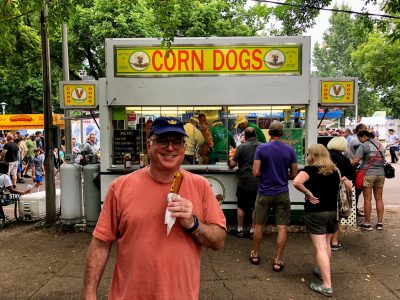 The Corn Dog booth is right across the street from the WCCO-TV pavilion. I usually make a beeline for it when I arrive. You can see one of the counterfeit corn dog stands in the background. Those poor souls may as well be buying Gucci purses on the street. 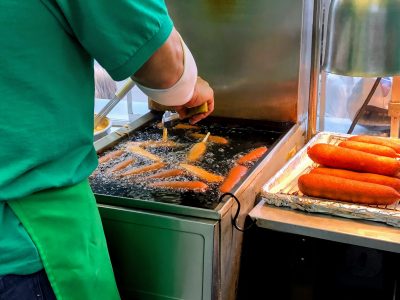 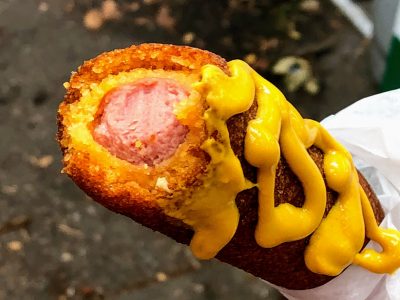 You can see the concentrated corniness of the batter that fuses with the hot dog rather than separates as second-rate corn dogs often do. The yellow mustard tang is essential to cut the richness.

Literally steps from the corn dog booth is the best foot-long hot dog booth at the Fair (h/t Andrew Zimmern). These dogs have a nice pop and good spicing that separates them from the pack. 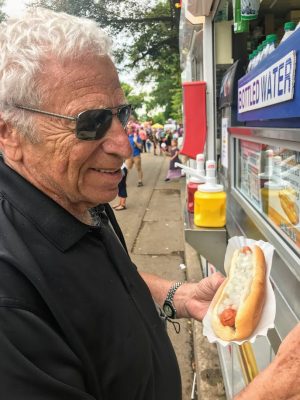 Twenty minutes from stepping onto the fairgrounds, you should have two corn dogs and a foot-long under (and beginning to strain) your belt. Time for some sides. 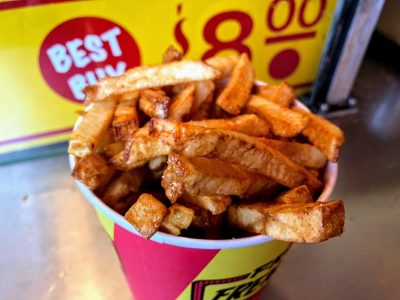 Enjoy the clean fry that turns the spuds crisp on the outside and fluffy within. 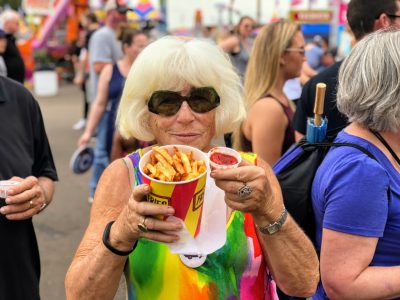 Then take a right and walk past the grandstand to the Corn Roast booth, where a legion of young people stand ready to hand you a smoky ear of fresh Minnesota sweet corn. Just say butter or no and add your own salt/pepper. 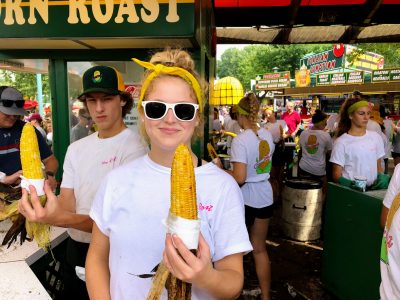 Now’s a good time for dessert #1. Up a block and to the left are Tom Thumb mini-donuts. Spend a few minutes hypnotically watching the darling dough-rings frolic in the cooking oil. Then grab a bag to keep you company as you walk the block or so to the food building. 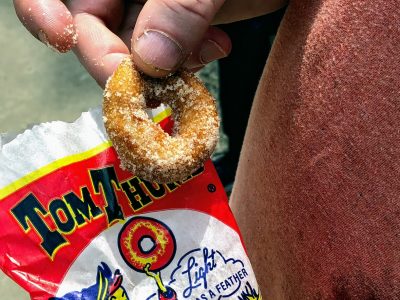 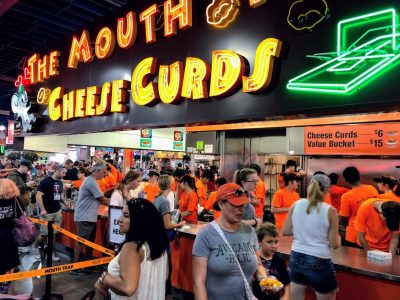 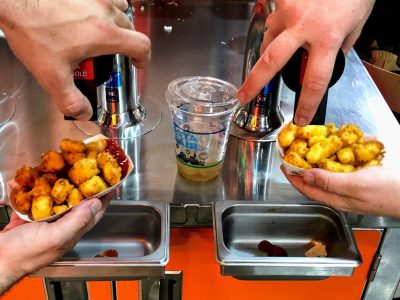 Onion rings are difficult to make well. They’re tricky to batter and fry evenly, especially when the rings themselves have different sizes and thicknesses. These beauties have a crisp, thin coating and the rings are remarkably uniform. Get them at Hot Dish on a Stick booth near the Midway. 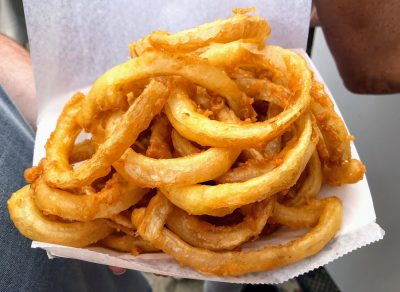 Lest I come across as a Fair luddite, there are a couple of foods new this year that are worth checking out. Neither are deep-fried or gored with a stick, but they earn a tentative spot in the rotation. 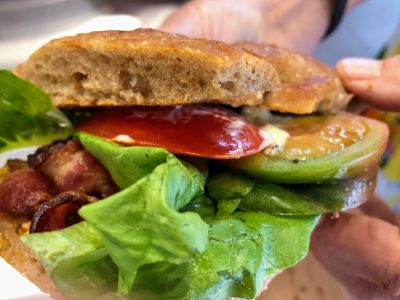 Next to the Democratic-Farmer-Labor booth you’ll find this BLT with fantastic red and yellow heirloom tomatoes and Hidden Stream farms bacon. I would’ve preferred the BLT on toast (preferably white), but the focaccia isn’t terrible.

Across the street from the Food Building is maybe the healthiest Fair food of them all. The Produce Exchange grills these softball-sized peaches from Colorado and serves them with goat cheese, Greek yogurt or simply grilled. Who knew Colorado produced such delicious peaches? 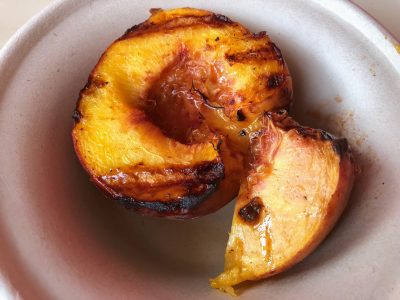 When was the last time you drank a glass of milk? Probably been a while. There’s something about a cold glass of milk that’s like nothing else. Since it’s all-you-can-drink for $2, start with a couple glasses of white milk and chase it with a glass of chocolate. When I was a kid, it was all-you-can-drink for five cents. Really. Then we took a stick and rolled our hoops down to the nickelodeon to see the moving picture show. 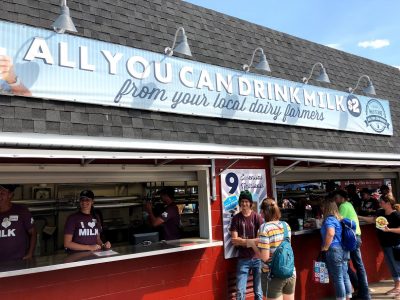 I struggled with whether to include Sweet Martha’s Cookies. I usually don’t partake but so many people do that I felt like I had to mention it. They’re warm chocolate chip cookies typically served in buckets. I never quite understood why anyone would want that many cookies, especially when there are so many other good things to eat. Maybe if you’re heading home or if you have a big group and want to hang at the all-you-can-drink milk stand for a while. Martha’s does offer a smaller size — a dozen or so cookies in a cup — so if you’re in the mood, that’s the call. 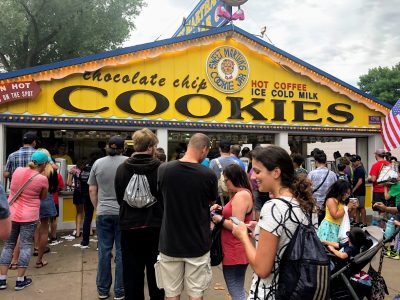 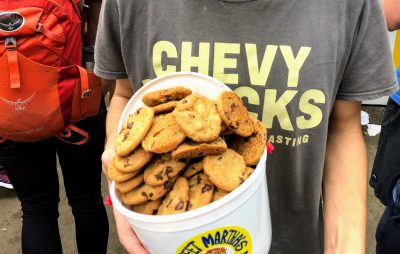 The foods at the Minnesota State Fair are my madeleines. They comfort and ground me. They connect me to my history and the people I love. They’re also just plain delicious. And just 350 more days until I can eat them again. 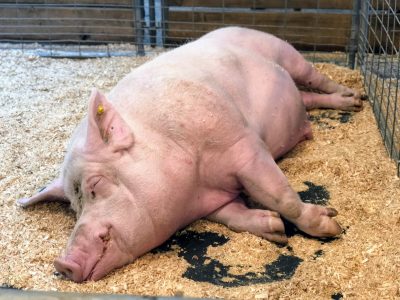 One Response to Our State Fair Is a Great State Fair