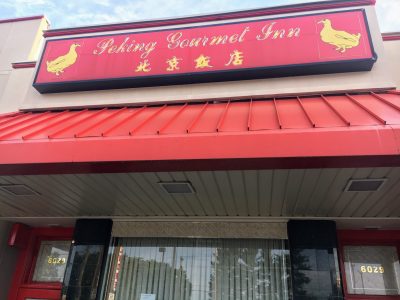 In 2005, Washingtonian’s list of 100 Best Restaurants was topped by Citronelle, Galileo, Gerard’s Place, The Inn at Little Washington, Kinkead’s, Le Paradou, Maestro, Palena and Vidalia. Now, twelve short years later, all but The Inn at Little Washington are gone. You know what didn’t crack Washingtonian’s list in 2005 (or any year since)? Peking Gourmet Inn. And you know what restaurant is not only still open but was stuffed to the gills on a recent Wednesday night in the middle of August? Yep, you guessed it. Peking Gourmet Inn. 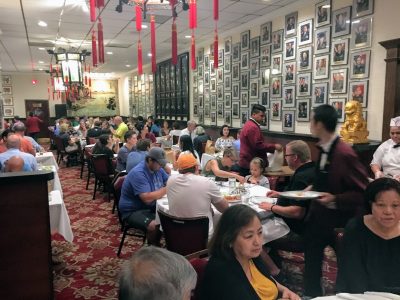 One of two equally-packed rooms

How is that possible? Even in 2005, Peking Gourmet Inn was long in the tooth. It was founded back in 1978 and hasn’t had any real buzz since the Bush Administration. And by Bush Administration, I mean the first Bush Administration, when it was George H.W.’s favorite dining destination. The entryway still celebrates those glory years, where photos of Bush I luminaries like Marlon Fitzwater and James Baker III line the walls like portraits in a Republican Hogwarts. 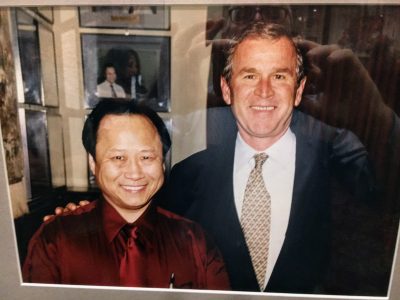 George W, but you get the idea.

None of that gave the place an ounce of foodie street cred. Unlike the Obamas, the Bushes weren’t that interested in food or checking out different restaurants. They found somewhere they liked and pretty much stuck to it. George H.W. reportedly ate at Peking Gourmet Inn more than 50 times during his White House years as Vice President and President. All that made it easy for me to write the place off as hopelessly uncool Chinese food for the Kennebunkport set. If I was going to schlep across Chain Bridge for dinner, it wasn’t going to be for some chicken subgum and a drink with a paper umbrella.

Then a few weeks ago, my friend Steve said he wanted to take me for Peking duck at Peking Gourmet Inn. This is the same friend who introduced me to my current favorite restaurant Himitsu, so I was prepared to suspend disbelief. Plus, I love Peking duck and there aren’t many places in the DC area that do it right.

But the more I thought about it, the more I wanted to check it out for a totally different reason. There’s something about longevity in the restaurant business that fascinates me. It’s such a crapshoot. You can have everything going for you and odds are things will still end badly. What allows places like L’Auberge Chez Francois, The Prime Rib, Taberna del Alabardero, Old Ebbitt Grill, 1789, and Martin’s Tavern to survive for decades while so many critical darlings have the life expectancy of fruit flies? It was as inexplicable to me as CBS being America’s most-watched network when I’ve never met anyone who’s seen NCIS or 2 Broke Girls (I live in multiple bubbles). 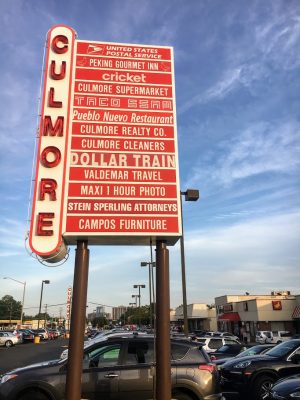 Peking Gourmet Inn’s shopping center. Not sure if that 1-hour photo shop still exists or if the mall owner just hasn’t bothered to get the ladder out since 2007.

Location may help explain the long-term success of some restaurants like Old Ebbitt, Martin’s Tavern and 1789 but it’s clearly not a factor here. This Virginia strip mall is so nondescript it could get a starring role in Suits. That means reasonable rent payments, which can be a huge advantage in keeping the doors open, as the rash of recent restaurant closings in Cleveland Park attests. 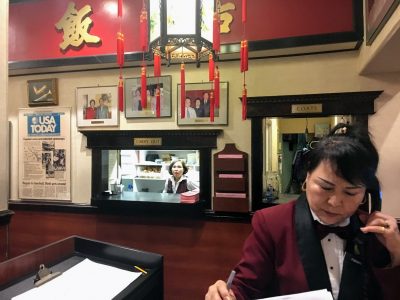 At least the lady in the take-out window made eye contact.

As a first-time visitor, I was treated politely but officiously at the host stand (I didn’t quite warrant putting the phone call on hold). Eventually, I was told to stand to the side and wait for the seating host to return. The hostess got chattier when she saw the people behind us. Good evening, Mr. and Mrs. So-and-So. We haven’t seen you in a while. We have table #3 ready for you. I hope that’s satisfactory. I didn’t mind in the least. Everyone is entitled to a certain baseline level of respect but regulars should get special treatment — just like they do on airlines, hotels and car rentals. The couple behind me has proven their loyalty; I may not be back until the next Bush Administration (Billy 2024!). 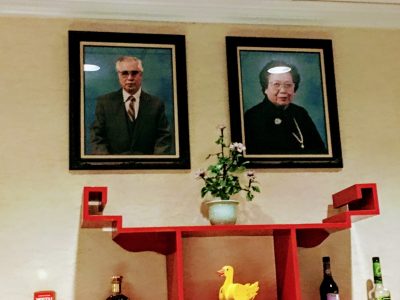 Dad and mom keeping a prominent eye on the dining room.

Peking Gourmet Inn has always been a family operation, beginning with patriarch Eddie Tsui who opened the restaurant in 1978 and continuing with second and third generations now running the show. A family member is almost always on site, supplemented by long-time managers who are like family (the manager on duty the night I was there had worked there for 17 years). This is not a chef-driven restaurant; it’s a management-driven restaurant. That means it’s not at the mercy of chefs who gets bored or ambitious and want to move on. You have no idea who’s cooking your food at Peking Gourmet Inn and it doesn’t really matter. You’re not there for creativity and a personal touch. You’re there for consistent execution of old favorites.

Rule #4 – Consistency is the hobgoblin of big success.

Which brings me to consistency, one of the more underrated virtues in a restaurant. Anyone can turn out a good dish. But can you turn out that dish day in, day out, no matter who’s in the kitchen? At Peking Gourmet Inn they can. You could order this lovely still-life of bok choy and mushrooms or these perfectly crisped and delicious dumplings on a Tuesday afternoon and they’d be identical to the same dishes if you ordered them on a Friday night…in 1998…or 1978.

You can see that kind of consistency as boring or you can see it as sustained excellence a la Cal Ripken. Either way, it’s tough to pull off. 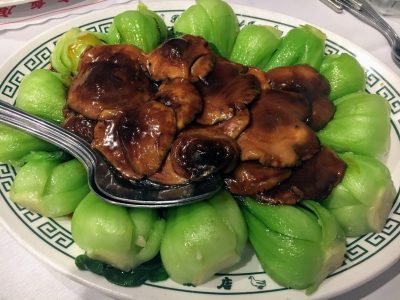 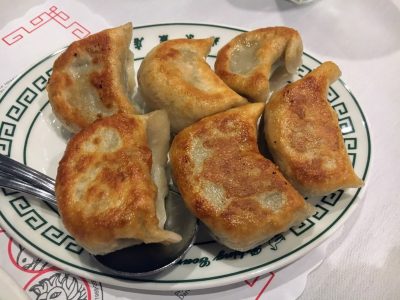 Rule #5 – Pick a specialty that’s hard to replicate and do it well.

By far, the #1 reason people return to Peking Gourmet Inn is the Peking duck.

Mr. Tsui made a canny choice back in 1978 to specialize in Peking duck. It has what economists call “high barriers to entry,” with a complicated prep process involving forcing air into the cavity to separate the skin from the meat and then hanging them up to dry for a day before roasting. That’s why you can’t cook them to order and many places have them available only with advance notice. You need high turnover to justify cranking them out on a rolling basis.

I can’t imagine anyone has higher turnover than Peking Gourmet Inn. They sell an incredible 65,000 ducks a year, which breaks down to 178 a day if they never close. There aren’t any warmed-over ducks sitting around losing moisture and crispness hoping someone orders them. 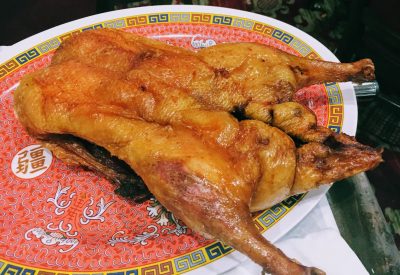 That massive turnover also means that Peking Gourmet Inn can also employ specialists whose sole job is to carve the ducks tableside. The skill and time needed to separate the crisp skin and meat from the underlying layer of fat, and then to slice the skin and meat in uniform slices is a luxury that most restaurants just can’t afford. 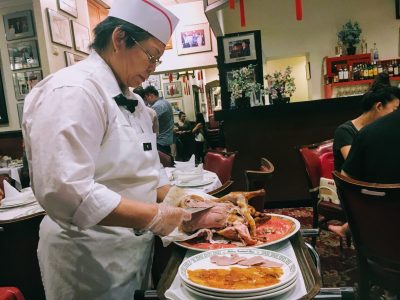 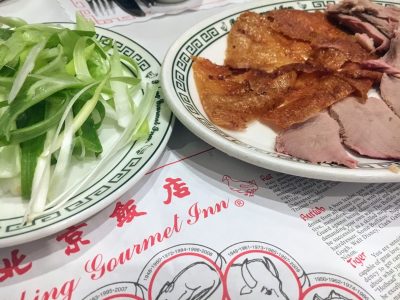 Duck skin and breast meat are perfectly sliced and plated, but as with chicken, the thigh and leg meat are even better. Those came on a separate plate suitable for gnawing. 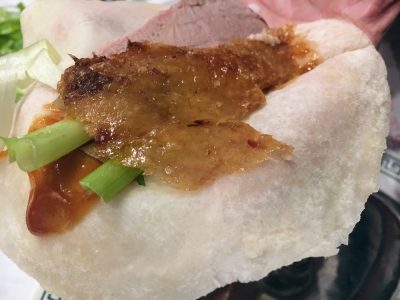 A whole duck comes with 12 house-made pancakes with scallions and hoisin sauce. The cucumber batons are worth ordering separately to add a cool crunch.

Rule #6 – The duck alone gets you halfway home, but you still need to deliver on the other half.

The duck is served right after the appetizers, so by the time you hit the entrees you’re already feeling pretty good about your meal. You just need one or two other good dishes to make it an unqualified success. Things can get a bit trickier at this point but let’s start with a couple of winners. 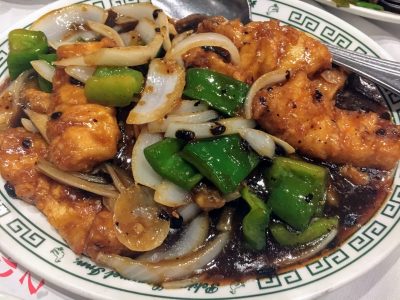 I’m a sucker for anything in a black bean sauce and this dish delivers with perfectly-cooked fish tossed with the classic green pepper and onion. Another piece of fish or two for the $38 price tag would’ve made it even better. 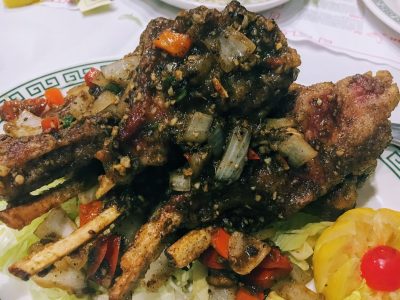 Most of the “Chef Specials” on the Peking Gourmet menu involve deep frying. Beef, scallops, shrimp, chicken. Fried, fried, fried, fried. Sometimes it works and sometimes it doesn’t. So while you’ll probably want to do at least one fried dish, don’t overdo it. 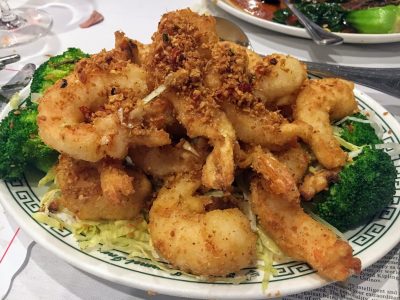 Big, plump shrimp lightly battered and topped with fried garlic and spices. Next time I may do the Firecracker Shrimp, which takes these same fried shrimp and tosses it in a spicy sauce. 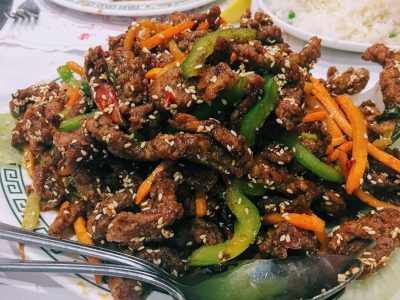 The frying gets a little heavy-handed here with the thin slices of beef getting a bit lost in the batter. There’s a dish on the menu called Szechuan Beef that’s very similar except the beef isn’t deep-fried. I think that’d be a better call and it’s $9 cheaper.

Once you move past the Peking duck and the Chef Specials, you’re pretty much in standard-issue Chinese fare. But Peking Gourmet Inn departs from the norm by doubling portion sizes and doubling the price. That makes it easier for large parties to share and also increases the odds that you’ll leave with doggie bags. There’s something about taking leftovers home that people seem to find immensely satisfying. I’ve never seen people happier than when they’re telling their server what to box up for them. It’s one of the big reasons people love the Cheesecake Factory. They always leave with a little present to take home, albeit one they bought for themselves. 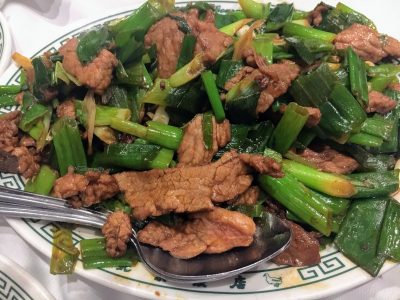 A little ho hum, even with spring onions from the restaurant’s farm in Purcellville, Virginia. 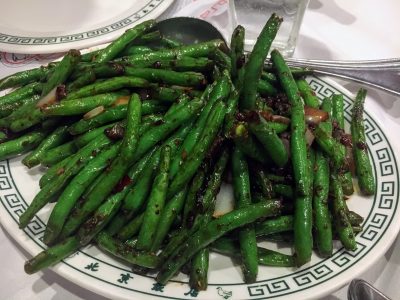 I prefer my beans a bit more wrinkled and blistered, but my tablemates liked the freshness to balance out the fried dishes.

There’s something about Peking Gourmet Inn that feels celebratory. I think it’s because they still treat dining out with a certain measure of seriousness and formality. The dining room runs with military precision. The tables are draped in white tablecloths. The waiters and hosts wear jackets and bow ties. The duck is carved tableside and the waiters (if you let them) will construct your first pancake for you. In short, it’s a throwback to a time when waiting tables was considered a profession and restaurants were special places to mark big events in our lives. 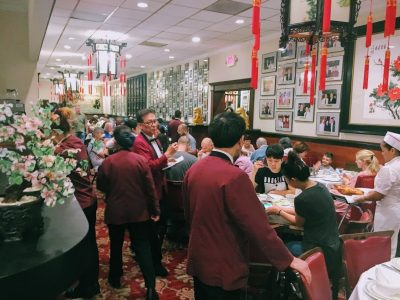 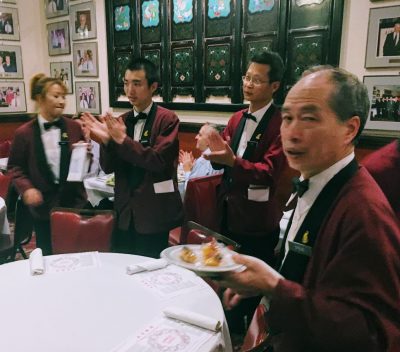 The waiters are mostly all business, but they do gather two or three times a night to sing “Happy Birthday” in Chinese to celebrating guests.

I think there’s an under-appreciation in the food community of the virtues of consistency, integrity and service that restaurants like Peking Gourmet Inn embody. As trendier places like The Riggsby and The Salt Line try to “evoke” memories of swank supper clubs and New England oyster houses, it’s good to remember that there are places out there that are still the real deal. No winking references to being “retro” or trying to recreate the past like they’re putting on a play. These places are what they are. There’s something honest and powerful about that. So while I’ll still be out there chasing the new new thing, I’m going to make more of an effort to sprinkling in some of the golden oldies that have stood the test of time. Just don’t make me watch 2 Broke Girls.