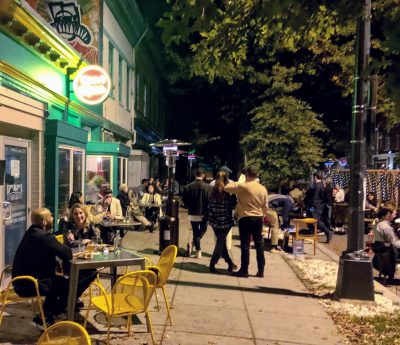 Naturally, the day after I posted a list of the best things I’ve eaten lately, I had one of my favorite restaurant meals of 2020. In Before Times, I would have taken a couple of weeks to write about it, but in the middle of a pandemic it didn’t seem right to wait. Restaurants need all the help they can get and they need it now. So let me tell you about Queen’s English.

Queen’s English opened last year in Columbia Heights serving Hong Kong-style cooking, a variant of Cantonese cuisine with lots of outside influences reflecting Hong Kong’s history as a British colony and international trading port. It’s also the birthplace of XO sauce, which longtime readers know is my personal kryptonite and renders me powerless to resist whenever I see it on a menu.

Queen’s English is run by the husband and wife team of Henji Cheung (who was born in Hong Kong) and Sarah Thompson. Henji does the cooking and runs the kitchen. Sarah seems to do everything else: general manager, beverage director, decorator, and, at least in our case, deliverer of extra rice when she sees we’ve run out. Thompson has created a well-spaced outdoor dining area in front of the restaurant, with a string-lighted straw partition providing a traffic barrier and plenty of heaters and fur pelts for warmth.

And the food? It’s terrific. We ordered seven of the thirteen dishes on the short menu and went an impressive 7-for-7. And the other six sounded just as good, so order with impunity. 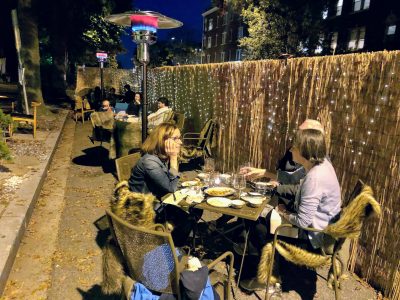 That’s my wife, Sonia, explaining to our friends about my deep psychological need to over-order. 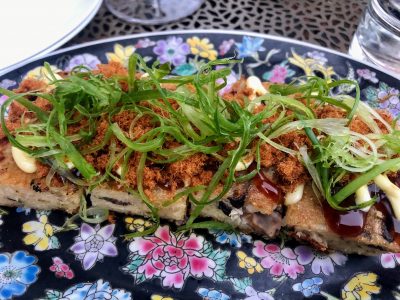 The only dish that’s been on the menu since day one, these crispy, creamy, custardy fritters are everything you’d want in a starter. 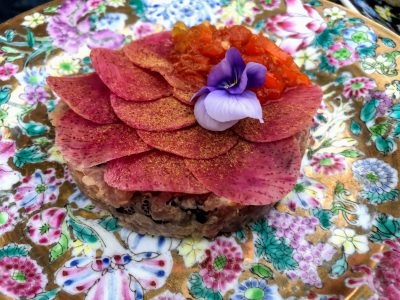 A thoughtful take on a dish that often feels phoned-in. The carbohydrate crunch from the puffed rice satisfied my usual need for some kind of cracker. 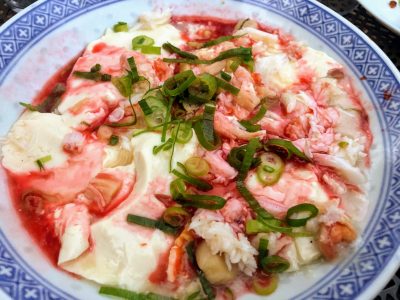 Fans of luscious soft textures and umami should order this, although dried scallops are one of the main components of XO sauce so I’m a fan before the dish arrives. The shocking-pink hit of acidity is courtesy of house-fermented red vinegar. 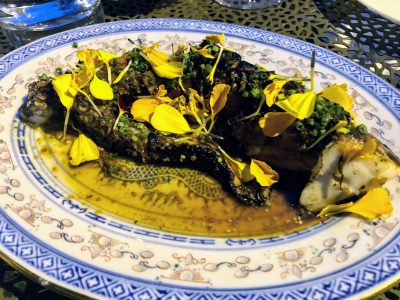 I’m not a huge fan of octopus (octopi?). It’s usually grilled into submission, one of those dishes that no one makes at home so they have no idea whether $17 is fair for a couple of tentacles (tentacli?). That’s what made this dish the surprise of the night. I’ve never had more tender octopus, the texture closer to sea scallops than the usual seafood-flavored Twizzlers. 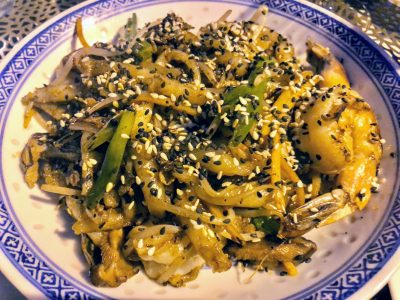 Deliciously chewy, slippery noodles made in-house from rice flour. And the plump shrimp are good, too. But who am I kidding? They’re just conveyances for the XO sauce (which I wouldn’t object to a tad more of, but that could easily just be me). 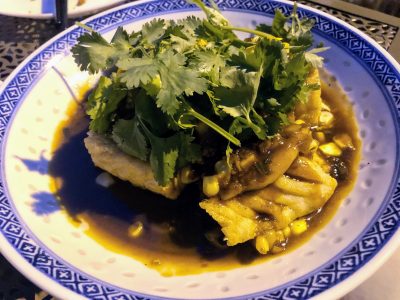 Perfectly-cooked fish in a well-balanced dish that hits all the right notes. Be sure to ask for rice so you can sop up the pungent sauce. 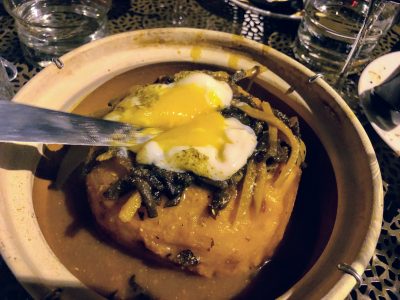 Hong Kong proves that you don’t a lot of space to produce a vibrant cuisine. In fact, it’s often the opposite: disparate cultures bouncing off each other in close quarters can produce experimentation and dynamism that otherwise might not occur (see Israel, Singapore, and Hawaii). This dish takes something quintessentially Japanese like simmered kabocha squash, tops it with a British coddled egg, and surrounds it in a Chinese broth and veggies. The combination might offend a purist, but in a culinary crucible like Hong Kong, it all makes sense. 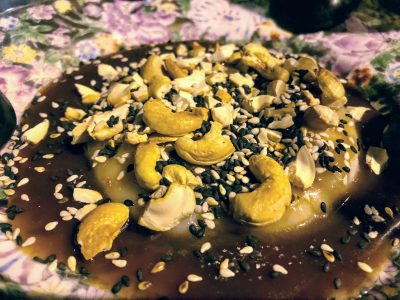 Another successful fusion, pairing the pleasant chewiness of a large rice dumpling with a warm salted caramel sauce. According to Wikipedia, salted caramel was invented by a French chef in Brittany in 1977, but I refuse to believe salted caramel is younger than Reese Witherspoon and Benedict Cumberbatch.

I want to see every restaurant make it through these hard times. But I have an extra-soft spot for small, neighborhood restaurants that turn out personal and delicious food. And when I find one run by a young couple pouring their heart and soul into the place — Cielo Rojo in Takoma Park is another example — all bets are off. I’m proudly in the tank and feel personally invested in their mission. So go thither to Queen’s English. One would have every confidence you’ll fancy it.