When DGS Deli closed last year, we lost the area’s most ambitious Jewish deli. You may not have noticed the vacuum if you’re craving a bagel and lox with a schmear or a pastrami on rye. Places like Call Your Mother, Ivy City Smokehouse and Stachowski’s can scratch those itches. But matzo ball soup is different. Like chopped liver and half-sours, it hasn’t gone mainstream. To get a great matzo ball soup, you still need a great Jewish deli.

I wish I knew why the DC area can’t seem to support a great deli. It’s not demographics. There’s a terrific deli called Perly’s in Richmond, Virginia — yes, Richmond, Virginia — that puts anything in the DMV to shame. It makes no sense. Our area has thirty times as many Jewish residents as Richmond and the only thing Jews around here bemoan more than the lack of a good deli is the fact that Dan Snyder is one of ours.

But while we don’t have any great delis — and I know this isn’t much consolation — at least we have a few middling ones. And even middling delis can turn out pretty decent matzo ball soup.

Good matzo ball soup starts with good chicken soup. Onions, carrots and celery are de rigueur. Parsnips and leeks are welcome, too. As for herbs, parsley and dill are most common, although dill should be used sparingly to avoid dominating the proceedings. Noodles are entirely optional, but their addition will make the soup more of a meal (sometimes transitioning to a dish called “chicken in a pot”).

Of course the matzo balls need to shine. Sometimes the choice is framed as “sinkers” (dense, heavy balls) versus “floaters” (light, fluffy balls, usually made with seltzer or baking powder). But that’s a false choice. A good matzo ball straddles both worlds: a substantial hit of matzo meal and schmaltz laced with tiny air pockets to soak up the broth. One gimmick I can’t get behind is the scourge of gigantic matzo balls. The now-shuttered Community in Bethesda served a matzo ball the size of a cantaloupe. I’m not saying that caused the closure, but I’m not saying it didn’t.

Without further ado, here are my official rankings of the eight local MBS offerings I could find. Let me know if I missed any and I’ll check it out the next time I come down with a cold. 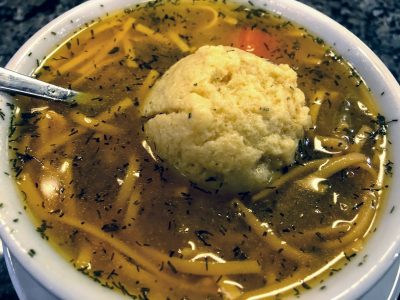 My top bowl in the DC area scores well across the board. It starts with a homey, unctuous broth flavored with dill that you’d be happy to eat on its own. Then it adds skinny, homestyle egg noodles rather than the wide, commercial variety you’d buy at the local Giant. The matzo balls themselves are first-rate. Rich and almost custardy, yet light enough to mix easily with the broth in your mouth. My only nits with Celebrity Delly are the smallish bowl for $5.50 and the fact that it’s too far for me to drive for take-out. 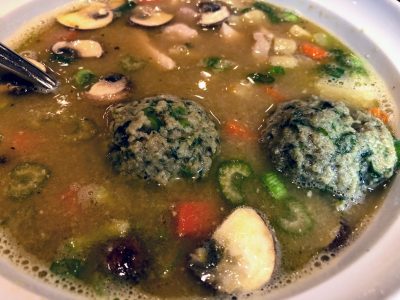 By far the cheffiest soup on the list — and the priciest at $16 for a good-sized bowl — is on the dinner menu at David Deshaies’ upscale diner in the Convention Center. This is a well-developed, house-made broth with deep chicken flavor. It’s also clear this soup hasn’t been sitting around all day. The chicken pieces are perfectly poached. The thinly-sliced celery pieces retain their crunch. The carrots are soft but not mushy. The alphabet pasta is al dente. And the uncooked mushrooms are added a la minute to steep in the broth. There’s also a plate of fresh dill, jalapenos and basil on the side to personalize the dish. Given the attention to detail, it’s surprising that the scallion matzo balls are so weak. They’re smallish, dense, and not particularly flavorful. Plus they have an odd dark coloring that makes them look more like meat balls than matzo balls. 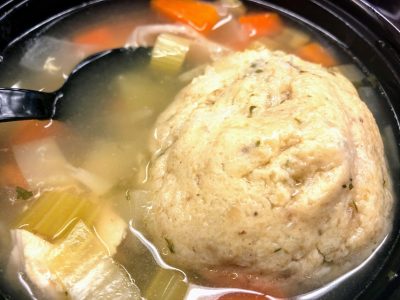 With the closing of DGS, Loeb’s may be the only remaining downtown source for MBS during lunch. Happily, Loeb’s does a decent job. While the thinnish broth, veggies, and chicken pieces are standard-issue, the large matzo ball itself is excellent, striking just the right balance between structure and fluff. I try not to let the plastic bowl and plastic spoon sway my opinion, but the truth is it probably does. There’s something about eating from a metal spoon warmed in a bowl of soup that plastic just can’t replicate. 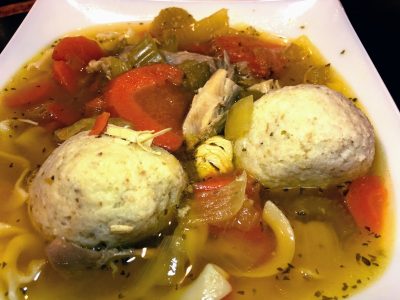 Ask anyone in Upper NW or Montgomery County where to get a bowl of matzo ball soup and they’re likely to point you to this slightly grubby deli on Grubb Road. The best thing about Parkway’s offering is the value: $7.95 for a large bowl with two good-size balls. The big chunks of soft carrots, celery and onion feel homey enough, as opposed to the yellowish broth and egg noodles which feel commercial. The chicken pieces have clearly been stewing in the soup for hours, which doesn’t do any real damage to the dark meat but leaves the white meat dry and stringy. The matzo balls come to the table slightly cool on the inside, but their dense texture keeps them from picking up any heat from the broth until they’re cut into bite-size pieces. 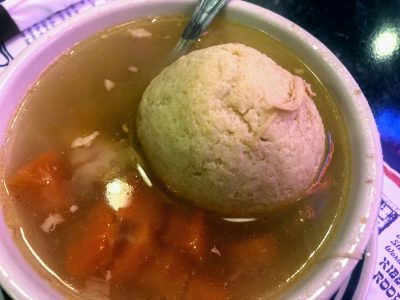 The local branch of the venerable Baltimore deli somehow lost its soul on the drive down I-95. This average bowl of matzo ball soup is Exhibit A. It offers the bare minimum: shredded chicken, carrots and a single matzo ball. No noodles, no celery, no herbs. Nothing offensive but nothing much to recommend it, either. 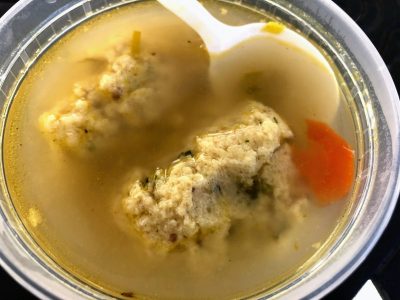 If Loeb’s plastic bowls are less than ideal, eating matzo ball soup from Wagshal’s plastic carry-out containers is worse. The most notable thing about Wagshal’s soup (available only on Tuesdays and Fridays) is that it’s the only self-serve entry on the list. That means you’re on the honor system. A $6.29 medium bowl entitles you to two matzo balls and a sign asks you politely to “share the wealth” and not take more than your share. Still, if you’re someone who likes more or less broth or any of the other ingredients, the self-serve approach lets you customize. 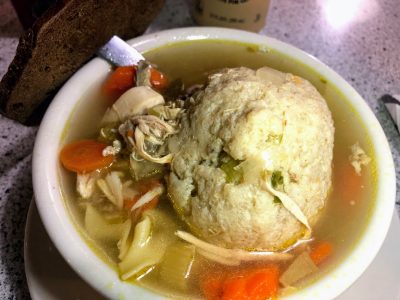 This soup could have ranked higher but for one thing: the unmistakable tang of ginger in the matzo ball. It’s not unpleasant, just out of place. Before you troll me in the comments, I know that ginger isn’t unheard of when it comes to matzo balls. In fact, I Googled it and discovered that no less an authority than Joan Nathan adds grated ginger (and nutmeg) to her matzo balls. All I can say is never meet your heroes. Sometimes they’ll add ginger to their matzo balls. 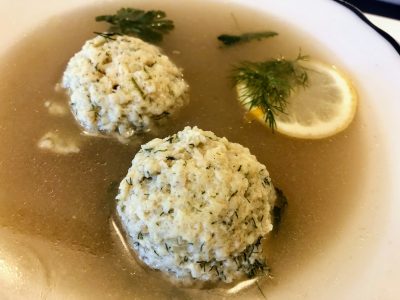 It’s usually hard to look at a bowl of matzo ball soup and not smile. This $6 bowl just felt desolate and sad, with two lonely balls sitting in a murky broth with no veggies, chicken pieces or noodles to break the monotony. A single slice of lemon floating around the edge of the bowl seemed like a useless piece of driftwood. The broth and the balls tasted overwhelmingly of lemongrass and dill, a flavor profile closer to a Greek avgolemeno soup than MBS.

So there you have the local round-up. Several decent options but none without flaws. Meanwhile, my wife and I had dinner at Perly’s in Richmond just last night. She hadn’t read the draft blog post and bought the whole Hey hon, there’s an exhibit called “Edward Hopper and the American Hotel” at the Virginia Museum of Fine Arts in Richmond ploy. I needed a Perly’s fix so bad I decided that staring at scenes of lonely people in cheap hotels was a small price to pay. Plus we also went to the Hopper exhibit.

The matzo ball soup at Perly’s is above reproach and would lead the pack locally: 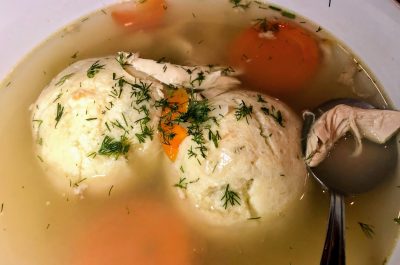 The pastrami is some of the best I’ve ever had: 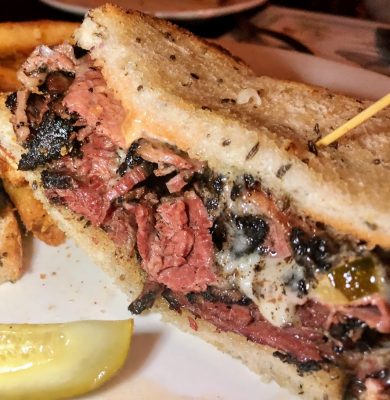 And the kosher wiener and creamy cole slaw are spot on: 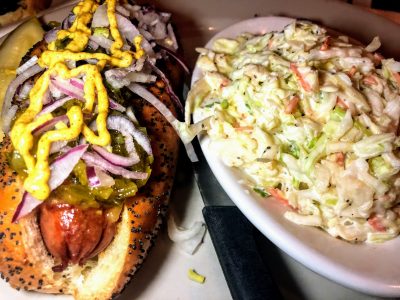 The good news is, if you hit the traffic right, you can get to Richmond in under two hours. That means if we leave right now, we can make it to Perly’s by dinner.

8 Responses to Matzo Ball Soup in DC — So Maybe You Think You Could Rank Them Better?