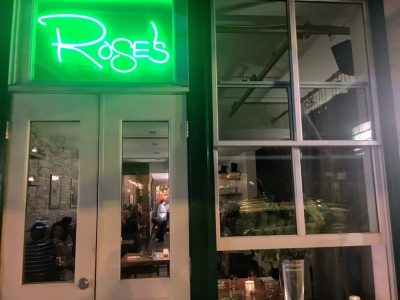 I had dinner last Tuesday at Rose’s Luxury. But it felt more like the final scene from The Way We Were. It was poignant. It was wistful. If Rose’s had bangs, I would’ve lovingly swept them from its eyes before we had one last nostalgic hug.

Sitting in that familiar space, I couldn’t help but flash back to those heady days from, say, 2014-2016 — we were so young! — when Rose’s exploded on the DC dining scene and lapped the field with its creativity, hospitality and deliciousness. I was smitten. Here’s one of my blog posts from that era:

I love Rose’s Luxury. It’s my favorite restaurant in DC. I’ve never once complained about the seating policy mishegoss. If people care enough about the food, they’ll do what I do and eat an early lunch on a Monday or Tuesday when Congress is out and there’s a line of thunderstorms predicted to hit Barracks Row around 3-4 pm to make any early birds think twice and then fake an injury at work and head down around 4:30 to line up for the 5:30 seating. Easy peasy.

The good news is the night I was there last week you could have walked in off the street at 7:30 pm and been seated right away. The more sobering news is there’s a reason for that — not only is the competition stiffer, but, as tough as this is for me to admit, Rose’s may not be the same Hubble I fell in love with.

Don’t get me wrong. Rose’s is still very good. It’s just no longer stand-in-line-at-4:30-in-the-afternoon good. That Rose’s has become something that’s hard to describe: a kind of misty, one might even say water-colored, memory of the way something-something. I can’t quite figure it out. 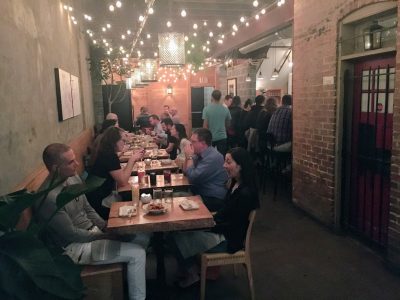 The conviviality of the space and the superlative service remain unchanged. This is what a neighborhood restaurant should look and feel like. What I like best about the service is they sweat the small stuff. I’d put Rose’s water-glass-filling team up against any in town. 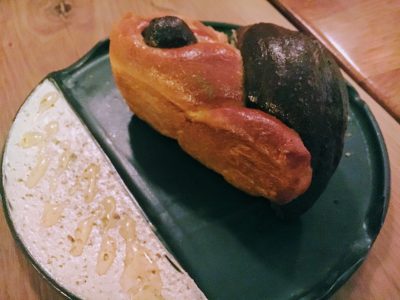 I’m grateful for any gratis bread offerings these days. Unfortunately this two-toned challah isn’t as interesting as some of Rose’s earlier loaves. Nice butter, though.

Grilled Cucumber with Yogurt and Anchovy

What doesn’t sound like much on the menu shows up as a winning combination of cucumber, anchovy, yogurt and pistachios swimming in a pond of verdant parsley vinaigrette. 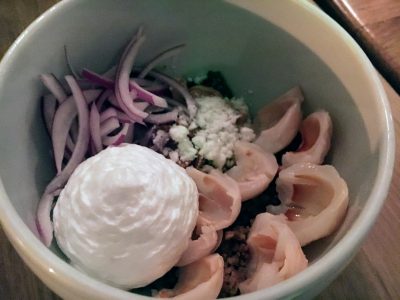 A justly iconic dish and the one constant on Rose’s menu, this salad continues to deliver the goods. It’s become so famous that it’s hard to recall how odd the combination once seemed. Kind of like James Carville and Mary Matalin. 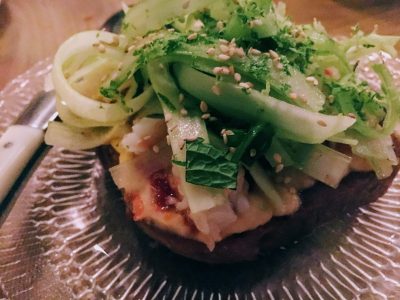 Another winner. The softly sweet shrimp and brioche contrast beautifully with the acidic crunch of the celery salad. At this point in the proceedings, it felt a lot like old times and I was starting to hope that my visit would have a different kind of Hollywood ending. 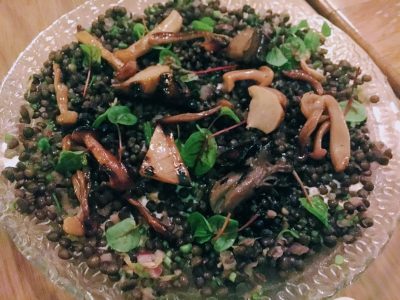 There’s nothing wrong with perfectly-cooked lentils and grilled mushrooms but there’s nothing terribly exciting about it, either. Happily there’s some subtle crunch in this salad to liven things up. The waiter insists it’s just the lentils but I remain unconvinced and am about to explore alternate theories with him — maybe some are flash-fried? — when I catch major side-eye from my family and let it go. 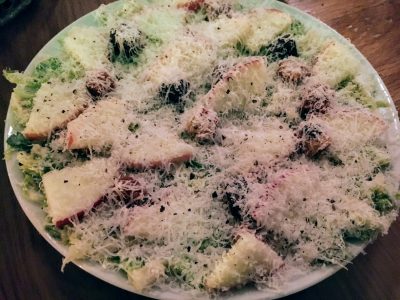 Nicely shaved sprouts, both cubed and shredded cheeses and good croutons make for a solid Caesar. Personally, I’m not a huge proponent of apples in salads but my daughter enjoyed them and I kept my thoughts to myself. (“Father of the Year” may be over-stating it a bit, but I appreciate the thought.) 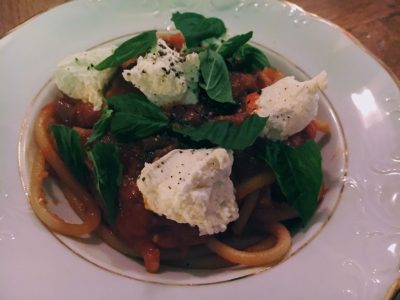 The biggest difference between the old and new Rose’s is the pasta program. What used to be the backbone of Rose’s menu now feels like the weakest link.

This bucatini is a case in point. It’s a simple dish that the old Rose’s would have knocked out of the park. This version is a tad sweet and pasty. It’s not bad, just undistinguished. 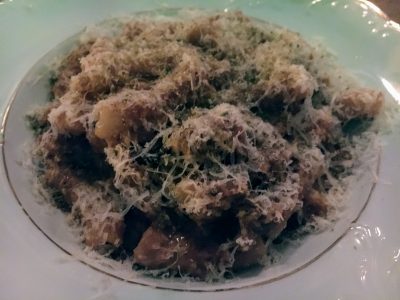 Pasta with sausage is one of my favorite things in the world and I love places like Red Hen that do it right. So when I tell the server he can take away the plate half-eaten it means something. Even sweeter than the bucatini, once I’d poked around and found all the sausage, I was done. 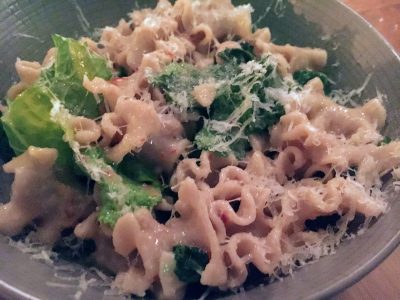 There’s nothing wrong with butter, garlic and cheese, but they make for a pretty humdrum pasta sauce. Thank goodness for the edge provided by the bitter, almost horseradish-y, mustard greens. 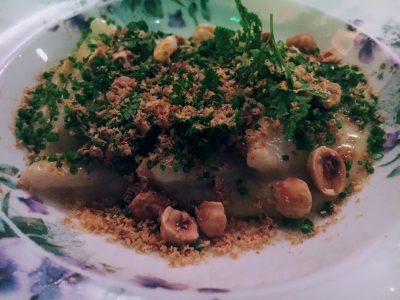 The best of the pastas, the herbs, nuts and cabbage puree all work as natural counterpoints to the blue cheese oozing from the little purses. 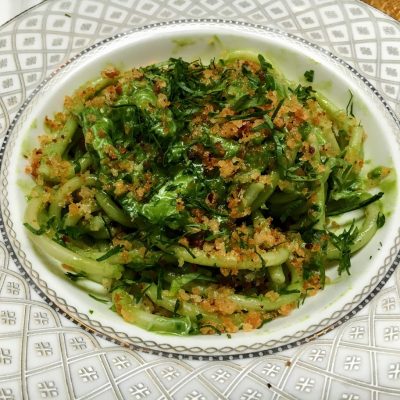 This is NOT a pasta currently being served at Rose’s. This is a pasta I had at Rose’s in 2016 so you can see what I’m talking about. It’s just so much fresher and more interesting than the current offerings. Granted, this pasta was served in spring when ramps and other ingredients were in season, but there are equally delicious things that can be done in winter and as long as restaurants are charging full freight, customers have a right to expect that standards won’t slip. 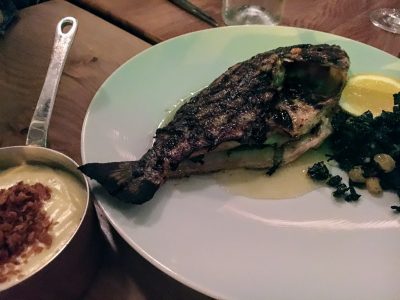 There are never more than two large “for the table” entrees on the menu at Rose’s and we ordered them both. (There was an off-menu special that we passed on — a Tomahawk Ribeye for $150. That was the second $150+ steak we’d been offered in the past week, the first being at A Rake’s Progress. I don’t know who’s ordering these pricey extravagances. Louise Linton can only eat out so often.)

The grilled dorade is moist with a sort of pleasant smoked-whitefish vibe, like it’s been smoked even before it hit the grill. A special shout-out to the terrific side of Robuchon potatoes (recipe: melt several sticks of butter and stir in just enough potato to give the illusion of non-liquidity; make sure the defibrillator is in working order; serve). 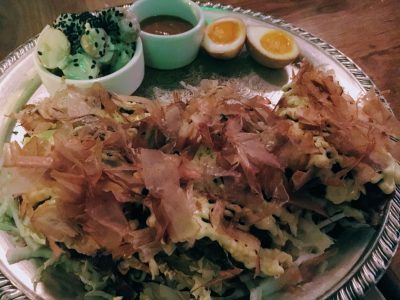 Tasty, well-executed dish. Karaage (Japanese fried chicken), Asian potato salad and 6-minute eggs are certainly au courant. Himitsu has made karaage with kewpie mayo a signature dish (although Himitsu serves it with a gochujang glaze and biscuits rather than as a salad). And topping a dish with shimmering bonito flakes reminds me of the seafood pancake Hazel did in 2016. There’s nothing wrong with borrowing from others, but Rose’s used to start the trends, not follow them. 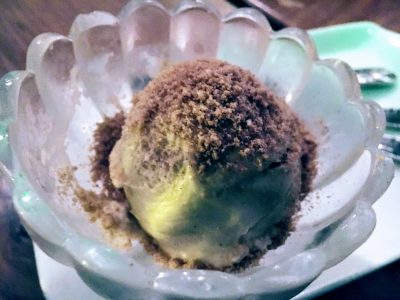 Tastes just like Cinnamon Toast Crunch cereal. I leave it to you to decide whether that’s a good thing.

I’m not sure when I’ll return to Rose’s. Maybe someday I’ll be able to go back and see it as just another restaurant. But I’m not there yet. There’s too much history. Eventually, my goal is to get to the point that it’s the laughter I remember, whenever I remember, the way we existed at a previous point in time. Or something like that. 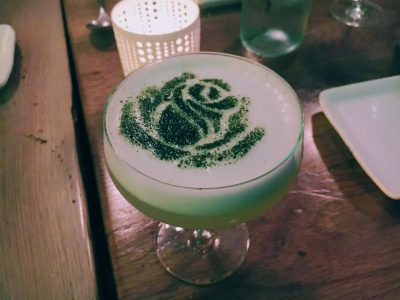 One Response to Scattered Pictures at Rose’s Luxury