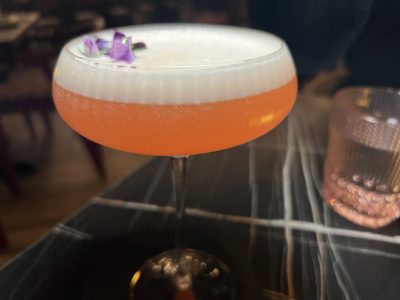 I was smitten with Venezuelan-born Chef Enrique Limardo’s cooking the first time I ate at his first DC outpost, Seven Reasons, back in 2019. His food was gutsy and flavorful, not precious and muted. He wove together Latin, Asian, and other global flavors into something uniquely his own. Plus he knew how to execute a dish, which isn’t faint praise these days when the cooking part can’t be assumed.

I call chef-as-purveyor syndrome. There’s a school of thought that says a chef’s job is to find the most pristine ingredients available and then do as little as possible to them before putting them on the plate. I agree with the first part but not the second. If you’ve ever been to a restaurant that crows about its locally-sourced carrots and then prepares them by tossing a handful willy-nilly in a cast-iron pan and chucking the whole thing into a wood-burning oven stacked like pick-up sticks so that no two carrots are cooked to the same degree of doneness — and some are barely cooked at all — you’ve eaten in a chef-as-purveyor establishment. It reminds me of the Seinfeld car rental bit where Jerry tells the woman behind the counter, “You know how to take the reservation, you just don’t know how to hold the reservation. And that’s really the most important part of the reservation.” Buying the food is important, but cooking the food is really the most important part of the dining experience.

If there’s a fly in the ointment, it’s that Chef Limardo’s restaurants tend to be on the pricey side. (By the way, if there’s a fly in your ointment, you should probably bring it back to CVS.) I know about inflation, increasing wages, and supply chain issues. I’m not saying the prices aren’t justified given the state of the world and the quality of the product. I’m saying they’re high. And I worry that will reduce the ability of those not on expense accounts or significant means to enjoy Chef Limardo’s terrific cooking — or at least, like me, not as often as they’d like. That’s not really a criticism. Chef Limardo is entitled to aim for whatever market segment he wants. It’s just reality.

Since this is my first post that includes ratings, let me explain them.

Rick’s Rating is a 1-10 scale. Food counts for about 90% of the rating, but I will adjust up or down for things like atmosphere, service, and value. I’ll explain why a Food Rating was adjusted up or down so you can form your own judgments (e.g., if your rich aunt is treating you and cost is not a factor, feel free to ignore any deductions for price-value).

The Price is how much it’s likely to cost you per-person to eat there, all-in. In a fine-dining restaurant, that might assume an appetizer, entree, dessert, a couple glasses of wine, tax, and tip. In a fast-casual place, those numbers will look very different because some of those categories won’t apply. I feel like an estimated “all in” price is the most relevant and hopefully will avoid sticker-shock when the bill comes. $ – Inexpensive, under $30 per person; $$ – Moderate, $30-70 per person; $$$ – Expensive $70-125 per person; $$$$ – Very Expensive over $125 per person.

Imperfecto opened in 2019 and has become Limardo’s de facto flagship. The space feels soaring and glamorous, with floor-to-ceiling windows and vertical lines drawing your eyes upward. The night I visited, Chef Limardo himself was out front cooking in a small open kitchen, doing cheff-y things like using a blowtorch to sear a wagyu steak. The whole scene felt like I’d stepped into some buzzy Emerald City from the red-brick quaintness of 23rd Street.

Happily, the food at Imperfecto is as good as the setting. You won’t find a clunker in the bunch. Plus, whatever you order will look beautiful on the plate. Among the starters, the moussaka cigars are the signature dish, and while they’re very good, I actually preferred the top-notch falafel and the lovely tuna tartare. Every mid-size dish I tasted was excellent, including the squid ink risotto and shrimp, the steak tartare, and the tiger prawns in the buttery, bisque-like broth. The mains often combine humble and luxe ingredients into a unified whole (e.g., the long-cooked lamb shoulder with truffles). It all works. And a good shareable finale is the plate of seven sorbets.

There are three ordering options: (1) the Chef’s Table on Friday and Saturday nights for $265 per person, not including drinks, taxes, and tip; (2) the Tasting Menu for $175 per person, not including drinks, taxes, and tip; and (3) the a la carte menu. If you go a la carte, the server encourages one selection from the small, mid-size, and entree courses, plus dessert, which will run you about $120 per person before drinks, tax, and tip. You could easily spend $500 per couple for dinner. That was about the right amount of food for me but you could eat lighter and save some money by doubling up on one of the first two courses.

The food rating of 9.1 ended up being the overall rating, with the small deduction for lack of value being offset by the transportive atmosphere and attentive (but not too attentive) service. 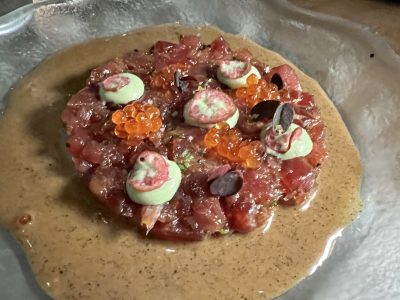 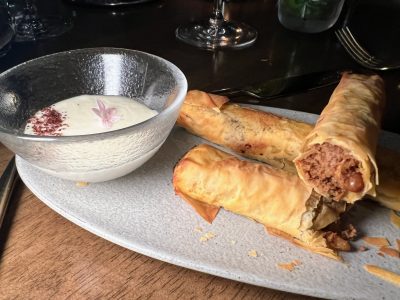 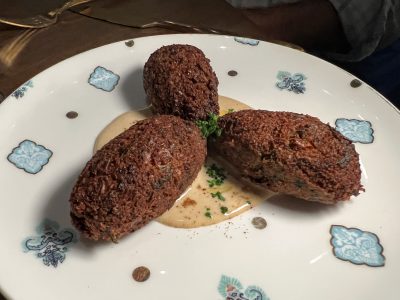 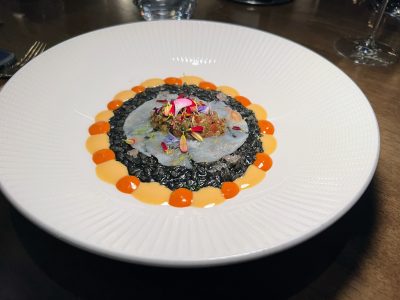 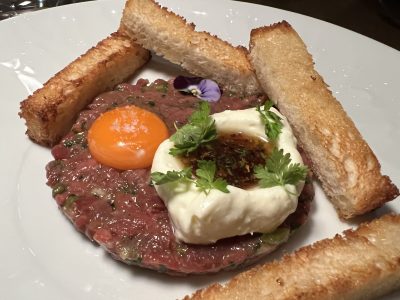 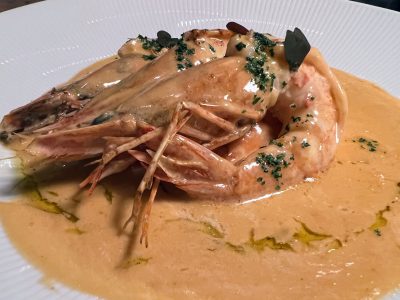 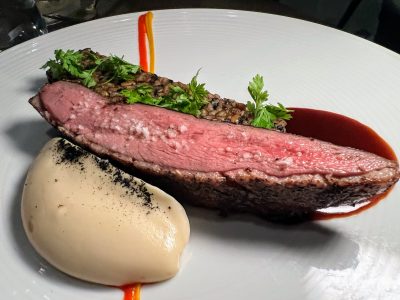 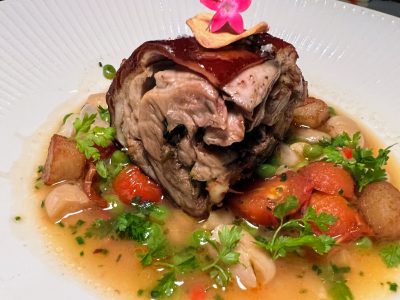 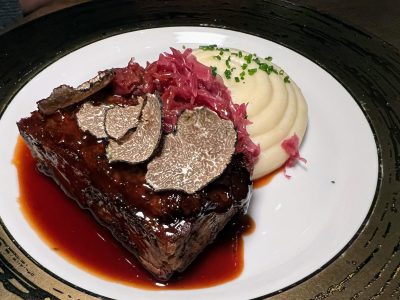 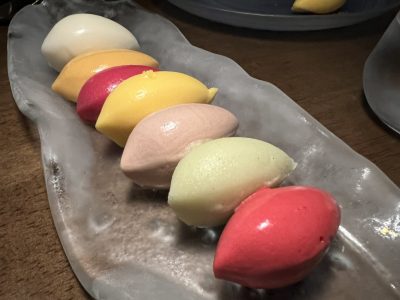 I can’t tell you how giddy I was when Joy opened this fall in Friendship Heights. It’s literally the closest restaurant to my house, and when I heard that it’d be a more casual outlet for Chef Limardo’s cooking, I planned to make myself a regular — the kind of beloved fixture who got welcomed back like Norm Peterson at Cheers or Dolly Levi at Harmonia Gardens. Alas, it probably isn’t meant to be. Not because the food isn’t really good — it is — but because it’s just not a comfy neighborhood spot. It’s more of a spot for those looking for a sophisticated DC dining experience without schlepping to DC. So while I’ll definitely be going back, it’ll likely be once every few months rather than every few weeks. Hopefully Louis Armstrong will still be excited to see me and tell me I’m looking fine.

Not surprisingly given its pedigree, everything at Joy is good, so take a look at the pictures below and order what you like. My favorites were the raw fish starters, the roasted tomato with rice and fried egg — you won’t see it anywhere else — the chicken with rice and corn creme, and the tropical coconut flan. Actually, that’s a pretty solid menu for two.

While the food at Joy deserves a rating in the high 8s, it takes a small hit on price-value that isn’t offset by service or atmosphere (the interior still has the bones of Little Beet Table, which gives me PTSD). There’s a $130 Tomahawk steak that’s very good but makes you wonder whether it’s triple-digit good. Then there’s the kids’ menu with a hamburger that goes for $23 and a spaghetti with tomato sauce for $22. I’m sure both are delicious and I’m all for exposing kids to quality ingredients. But, c’mon. A kids’ menu is to encourage families to dine together by offering kid-size dishes at kid-size prices. $23 is on the high end for an adult burger. For a kids’ burger, it makes no sense at all unless it comes with a pretty nice toy. Like maybe a PS5. 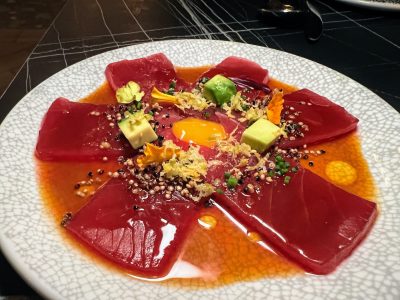 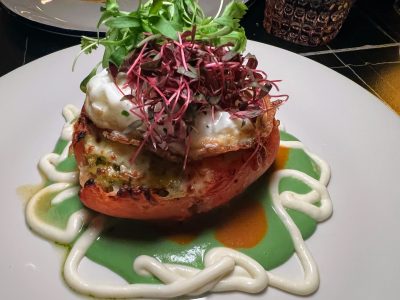 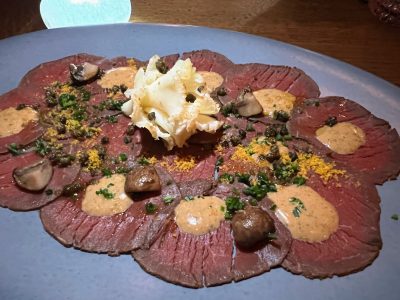 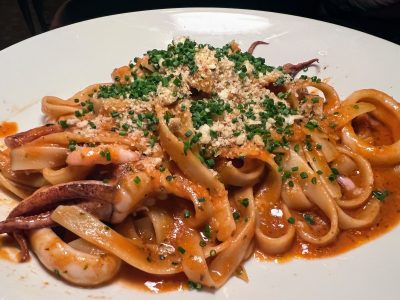 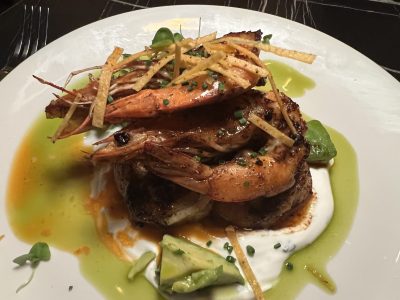 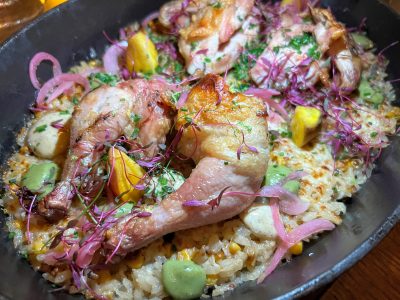 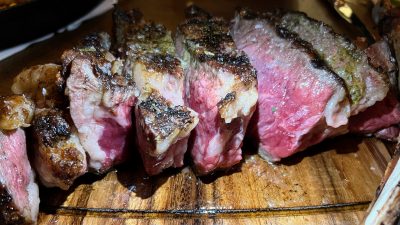 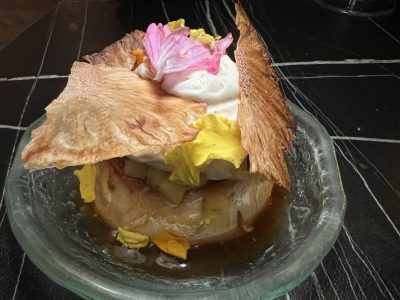 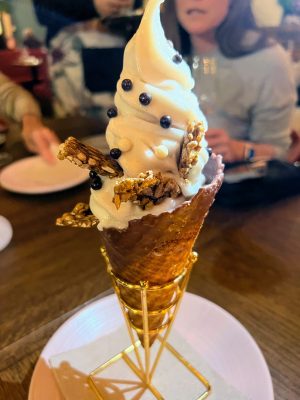