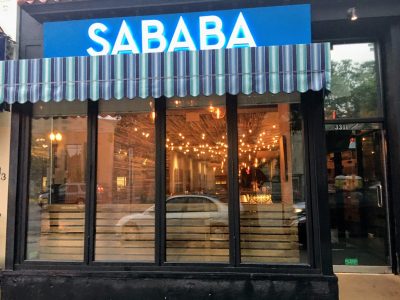 Israeli food is hot. I’ll bet a lot of you have at least one cookbook by Yotam Ottolenghi sitting on your shelf as we speak. The American Ottolenghi, Michael Solomonov, runs the popular Zahav in Philadelphia and will soon release his second cookbook on Israeli cuisine. Then there’s Einat Admony at Manhattan’s Balaboosta and other chefs opening Israeli restaurants from LA to Chicago to Paris. Israeli cuisine is becoming Israel’s most beloved export since Gal Gadot.

So when Ashok Bajaj — whose collection of DC restaurants includes Rasika, Oval Room, Bindaas, Bibiana, Bombay Club, 701 and nopa — felt Ardeo+Bardeo needed a refresh, it wasn’t a complete shock that he decided to ride the wave and re-launch as an Israeli restaurant. And Sababa was born.

But just what is Israeli cuisine? Well, that’s where the wicket gets a bit sticky. Some see Israeli cuisine as a vibrant melding of 100+ cultures from around the Middle East and around the world. Others see it as cultural appropriation of indigenous Arab cuisine. I wouldn’t touch that debate with a ten-foot kebab. It always seems to devolve to a place where you’re not sure you’re talking about food anymore. Besides, it’s not what you came here for. You want to know if Sababa is any good. (If you’re interested in the broader debate, check out the terrific documentary “In Search of Israeli Cuisine.” It’s on Netflix and stars none other than Solomonov himself.)

Sababa’s menu will be familiar to anyone who’s eaten at other modern Middle Eastern restaurants — ingredients like za’atar, tahini, eggplant, chickpeas, pomegranate, chicken and lamb turned into dips, spreads, salads, kebabs and braises. There’s no dish at Sababa that wouldn’t fit comfortably on the menu of a less geographically-specific restaurant like Maydan. And, like at Maydan, you’ll be much happier if you come prepared to try lots of dishes and share them. The saddest thing I saw at Sababa was the couple next to us who each ordered their own identical kofta kebab and nothing else; it felt like a little cry for help as they sat eating off their separate plates.

So how’s the food? Much of it is good, except when it’s not. Which is another way of saying that Sababa is inconsistent — sometimes frustratingly so when it comes to dishes that an Israeli restaurant ought to knock out of the park. This is not the kind of restaurant where you can point to anything on the menu and know it’ll be good. You need an intelligent game plan and stick to it. In other words, you need to not be Dan Snyder. 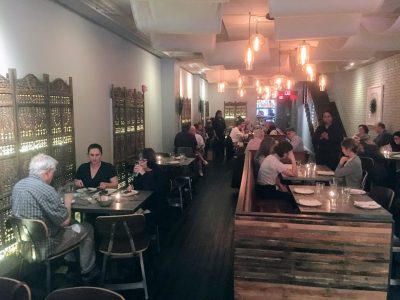 Sababa’s website touts that the dining room “evokes the port of Tel Aviv with Mediterranean tiles on the floor and sails on the ceiling.” I think it evokes Ardeo+Bardeo with a Trading Spaces makeover that came in well under the $2,000 budget. 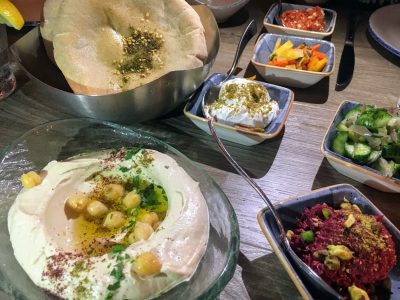 An Israeli restaurant had better get the hummus right, and Sababa does. Smooth and creamy, it’s fluffier and more tahini-forward than some of the hummuses around town at places like Kapnos or Lebanese Taverna. The accompanying pita is fine, although with so many good flatbreads in town these days, it seems a bit stodgy.

On the other hand, the gaggle of small vegetable “salatim” (Hebrew for salads) is not $16 well spent. Salatim are commonly served in Israel at the beginning of a meal and the server at Sababa encourages us to follow suit “to prepare your palate for the flavors to come.” Corporate may want to rethink that sales pitch because there’s nothing interesting or distinctive about these salads, and if customers really think they’re a harbinger of what’s to come a lot of them might ghost before the rest of the food arrives. 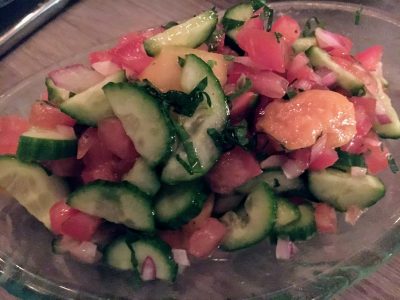 Speaking of dishes Sababa ought to nail but doesn’t, I give you their Israeli Salad. The quality of the tomatoes make or break this dish and these tomatoes here were a wash-out. Hopefully that will improve as we head into tomato season. The addition of mango is a twist on tradition that actually helps the dish because at least the fruit was ripe. 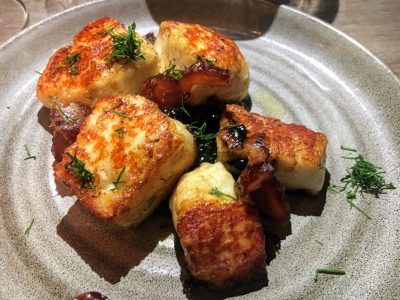 After those early missteps, Sababa went on a roll through the other small plates, starting with these roasted chunks of halumi cheese. The combination of a good sear followed by roasting (as opposed to the more common grilling) ensures that the cheese is heated evenly all the way through. The honey, dates and charred lemon provide nice counterpoints to the mild, gooey cheese. 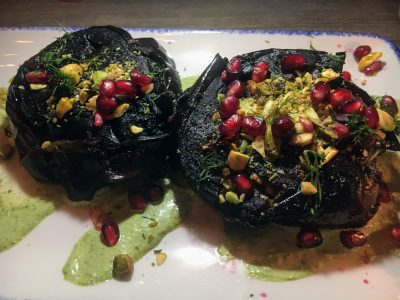 My wife’s favorite dish of the night. They call these eggplants charred but what they really are is so burnt beyond recognition you’d need dental records to identify them. Still, eggplant is a vegetable that often benefits from a good scorching. The skin gets crisp and smoky while the inside stays soft and luscious. The labne, pomegranate and pistachio provide needed textural and flavor contrasts to the mushy and slightly bitter eggplant. 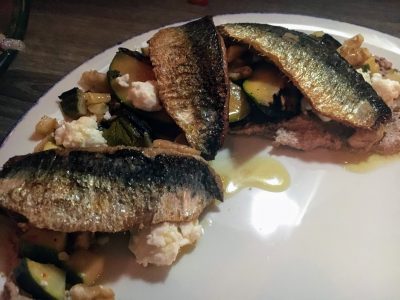 I was traumatized by a can of King Oscar sardines as a child. They were featured prominently on Dagwood Bumstead’s nine-decker sandwich so I thought I’d give them a shot. Big mistake. They were smelly and desiccated and looked more like the minnows I used to catch other fish with than anything I’d eat on its own. I can’t remember if I actually tasted them or just went looking for the nearest cat.

So when I tell you these sardines were really good, it means something. They were crisp-skinned and fishy, but in a good way. And while the zucchini and walnuts didn’t necessarily make sense with the fish, feta improves everything it touches. 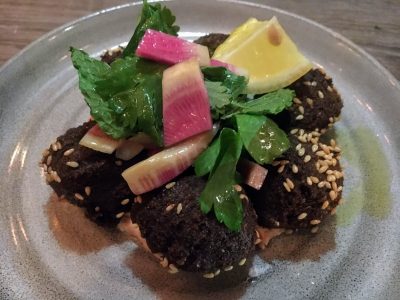 Fava bean falafel is Egyptian and supposedly produces balls that are lighter and moister than falafel made with chickpeas. These falafel are indeed very good, crisp on the outside and herby-green and moist on the inside. 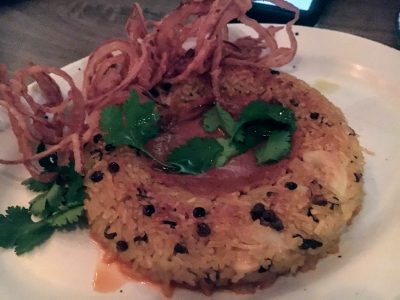 One of Sababa’s best dishes is this kushari, another Egyptian dish, which mixes lentils, noodles and rice and then tops it with a spicy tomato sauce, garbanzo beans and fried onions. The dish has become Egypt’s national dish but probably originated in India and was brought to Egypt the time of British colonization. No wonder the tomato sauce tastes vaguely Indian with its notes of cumin, coriander, cardamom and cinnamon. The combination of rice and noodles with the freshly-fried onions makes for the best Rice-A-Roni ever. 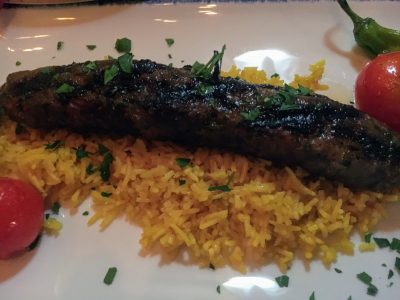 I order kofta kebabs whenever I can and Sababa’s are nicely done, crisped on the outside with a juicy, well-spiced interior. At $14 for a single kebab with a dollop of rice they’ll never compete on value with Moby Dick’s two kebabs and more delicious boatload of rice for $9.99, but this version compares well with other upscale places. 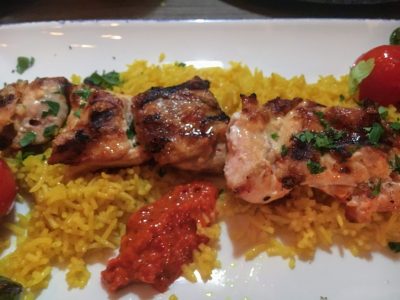 The grilled chicken kebab is solid, thankfully using juicy thigh meat rather than trying to thread the needle of cooking breast meat all the way through without turning it into cotton balls on a stick. 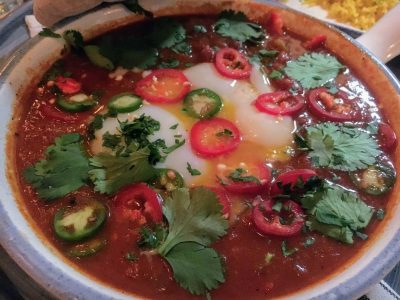 So much of cooking is about proportions. The proportion of sandwich fillings to bread. The proportion of pizza toppings to crust. The proportion of Oreo cookie to cream filling (the correct answer is Double Stuff). This shakshuka gets the proportions all wrong. The poached eggs are like two little rowboats adrift in a vast tomato sea. Once you eat them you’re still left with a huge bowl of salsa-like broth. I didn’t know whether to ask for a spoon or a bag of tortilla chips. 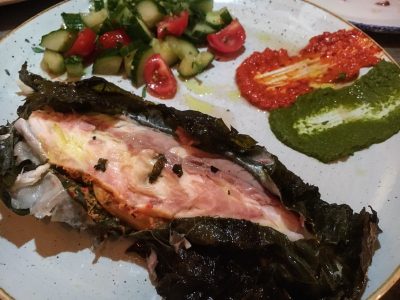 Branzino (Fish of the Day) Roasted in Grape Leaves

Here’s the problem with restaurants cooking fish in grape leaves (or banana leaves for that matter). The cook in the kitchen loses direct contact with the fish and has to rely on timing rather than sight and feel. And even if it’s timed right in the kitchen, the fish continues to steam until it makes its way to the table and the package is opened. That’s how you end up slightly overcooking a pretty forgiving piece of fish like this branzino. De-boning the fish before roasting makes for easier eating but also makes it easier to overcook. The accompanying tomato-cuke salad and red and green smudges seem more like color-coordinated plate-fillers than part of a unified dish. 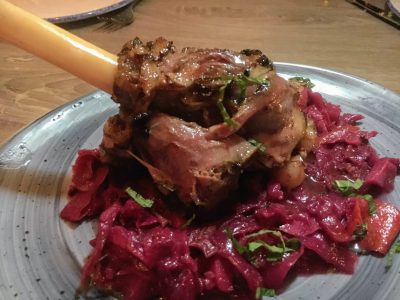 Lamb Shank with Braised Red Cabbage with Dates and Citrus

The meal ended on a positive note with this well-cooked and fork-tender lamb shank. The red cabbage retains some texture, with a slightly sweet, almost Bavarian vibe. I saw it as a subtle homage to the European diaspora but I may be over-reading this one.

So overall Sababa is…complicated. It’s not in the same league as a Zahav or a Balaboosta but you can put together a good meal here. Start with the hummus. Spend most of your time on the Small Plates like the eggplant, halumi, kushari, sardines and falafel (I didn’t try the cauliflower or the tuna crudo but I’d bet those are good, too). Then get a kebab or two and maybe the lamb shank. Steer clear of the salatim, the Israeli salad, the shakshuka and the fish.

Wanted to share the good news that Rick Eats DC was recently ranked the #3 food blog in DC by Feedspot. We came in right behind Eater and Washingtonian, both of which I’m pretty sure have actual staffs. Anyway, thanks to all of you for supporting this site and eating DC with me. I never thought sharing my love of food would get much beyond family and close friends but I really am so grateful. Here’s the link to the rankings:

3 Responses to Israeli Cooking at Sababa — Some Good Dishes, But Not the Whole Megillah