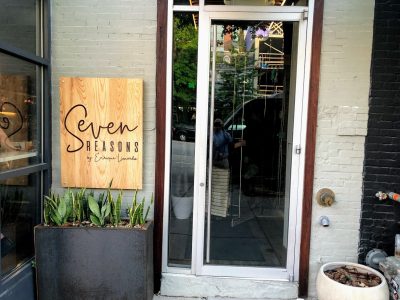 I knew this would happen. I knew that as soon I came out with my Top-25 Restaurant list, some new place would open and blow a gaping hole in my rankings. Right on cue, along came Seven Reasons, the new modern Venezuelan spot that would easily crack my top ten, maybe even top five. It’s that good.

Seven Reasons is one of those restaurants that can’t be separated from the vision of its chef, Enrique Limardo. I’m going to try to avoid using the phrase “personal journey,” but it’s a restaurant anchored in Limardo’s native Venezuela/South America while reflecting his own personal jour…I mean, the time he spent cooking his way through Spain, the Middle East and elsewhere. His elevated take on the cooking of his roots reminds me of two other local chefs, Jonny Monis of Komi and Kwame Onwuachi of Kith/Kin, who offer their own chef-y spins on Greek and West African/Caribbean/Creole cooking, respectively. All three are successful because even with all their fancy techniques, they never lose touch with the soul of their native cuisine.

Not that I know much about the soul of Venezuelan cooking. I’m pretty sure this was my first Venezuelan restaurant experience. To some extent, Chef Limardo was riffing on a song I hadn’t heard before and I’m sure I missed some points of reference. On the other hand, most of the individual ingredients were accessible and not unfamiliar. There may have been a time (not so long ago) when quinoa or purple and blue potatoes were considered exotic. Now Giant sells quinoa salad by the quart and Jet Blue doles out bags of Terra Blue chips at 30,000 feet on the way to Toledo.

Seven Reasons’ format is familiar as well, its menu divided into snacks, small plates, medium plates and large plates meant for sharing. You know the drill by now — and happily the waitstaff at Seven Reasons knows you know the drill. They don’t try to explain the concept or tell you how many plates to order. The only thing more tedious than those speeches is someone explaining James Holzhauer’s strategy for winning on Jeopardy! (I usually make it to the part about how he so brilliantly starts from the bottom of the board rather than the top before my eyes roll to the back of my head.) 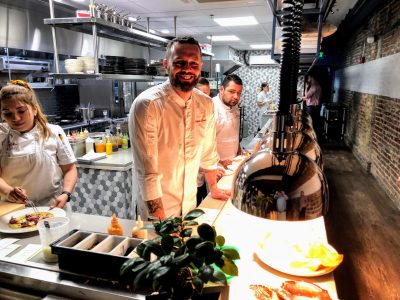 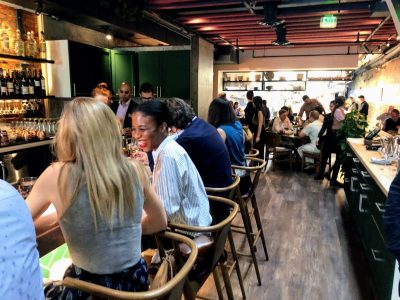 If you want to be where the action is, snag a seat on the buzzy main floor with a view of the open kitchen. If you like things a bit quieter and with a little more elbow room, sit on the second floor, or, even better, on the mezzanine just above the second floor near the front windows. 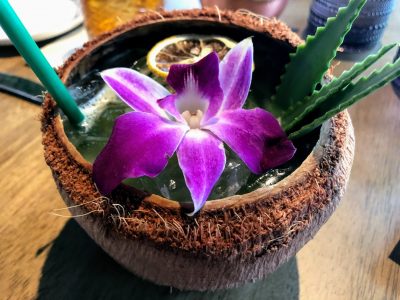 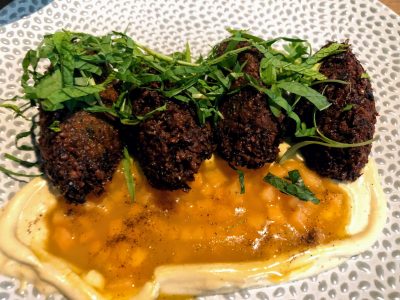 A lovely mashup of Latin and Middle Eastern flavors from the snacks category. If Seven Reasons ever opens for lunch, these crisp and moist nuggets would make a terrific sandwich. 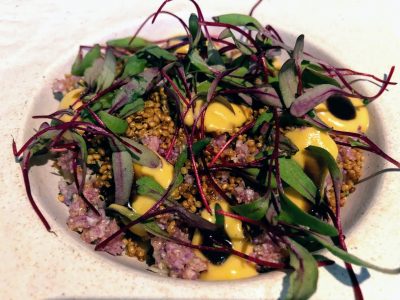 By the second dish you start to sense a pattern. Every plate will have a lot going on but remain well-balanced and delicious. It’ll also be pretty to look at and be the only place in town you can order it. Take this cauliflower tartare, which we ordered just to find out what it was. It ended up being such a happy melange of crunch, acidity, sweetness, creaminess and herbaceousness that I never slowed down to properly analyze it. 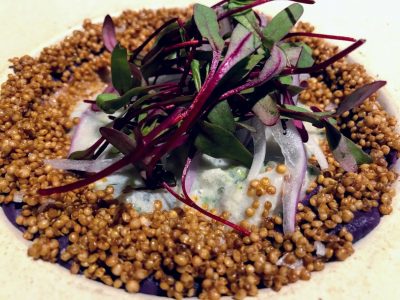 Speaking of delicious, I could eat a few dozen bowls of this. Don’t be misled by the return appearance of toasted quinoa. It was just a coincidence that we ordered the two dishes on the menu that added toasted quinoa for crunch. 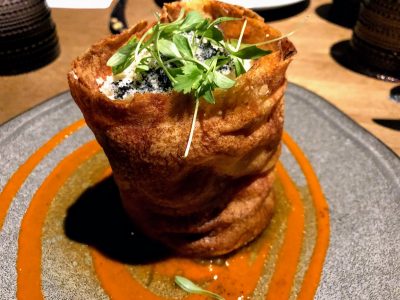 Limardo’s spin on a French classic. The potato shell conceals a foamy, bacon-y lusciousness made uber-luscious by a soft-cooked egg. 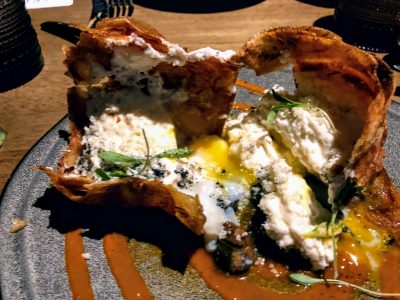 I posted this picture of the broken-apart fondant on Instagram. My friend Rick told me it wasn’t the most appetizing shot. I beg to differ. The billowy curds of whiteness — my nickname in high school, by the way — meld with the oozing egg into a time elapse photo of what happens when you leave a cannoli on the counter for a month. Ok, maybe Rick has a point. But I’m serious. It was so delicious. 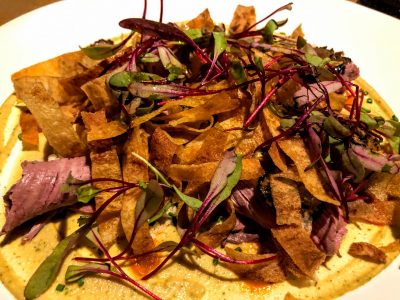 This carpaccio is the one dish I might not order again. Not because it didn’t taste good. It did. But it wasn’t raw beef; it was thinly-sliced rare beef. Not bad, but not carpaccio. And at $24 a bit too pricey for roast beef. 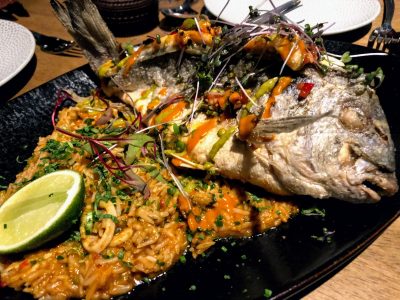 The dorade itself is largely de-boned and beautifully cooked. But the real star is the seafood rice with shrimp and calamari. The rice has an intensely rich seafood flavor that can only be improved by a squeeze of the accompanying lime and lemon. 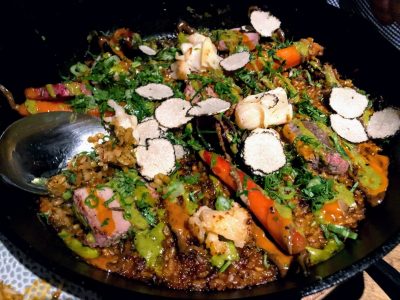 An earthy paella-like dish that reminds me of the terrific bomba rice at the late Arroz when it first opened. Hearty and umami-rich chorizo, pork and truffles play off against lobster and roasted/pickled carrots and beets. My table agreed that the whole fish was slightly better from the Large Plates category, but not by much. 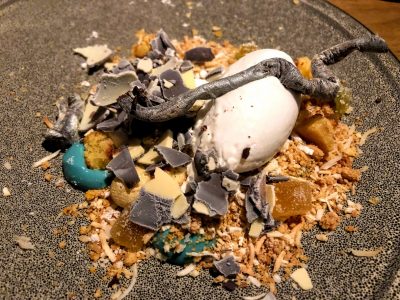 Deconstructed, modernist desserts usually leave me cold. But this visual depiction of the aftermath of the assault on King’s Landing was excellent. 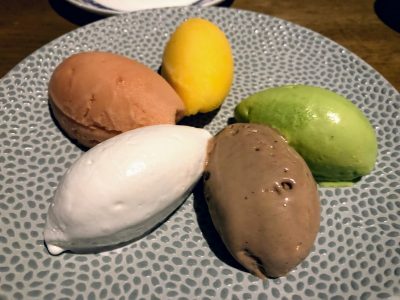 A good test of a restaurant’s commitment to desserts is how well they do ice creams and sorbets. These were all creamy and deeply flavored and I appreciate how Seven Reasons lets you sample them all. I’m going out on a limb and say my favorite was the pistachio, knowing that there are a lot of pistachio haters out there. Which always puzzled me. Everyone loves pistachio nuts, but set a dish of pistachio-flavored ice cream or pudding in front of a lot of people — even some members of my own family — and you’d think they were being poisoned. Maybe it’s the unnatural green food coloring that makes pistachio-flavored desserts so unappetizing. I should ask my friend Rick.

Now if you’ll excuse me, I need to do some quick edits to my top-25 list. Please don’t tell anyone that there are now two number fives.