The thing that bothers me about restaurants that encourage sharing isn’t the sharing itself. My family always shares when we go out, even in traditional restaurants. Sometimes it’s a formal negotiation to go halvsies on a joint order. But usually it’s much more ad hoc, with dishes, forks and spoons being passed around like an impromptu tasting menu being fashioned from the bigger servings. Especially if you ordered well, it’s considered extremely bad form in my family not to offer bites. Everyone’s entitled to taste the best thing on the table. By the time you’re done farming out bites you may only get to eat half your entree, but you’re more than compensated by knowing that you “won” the ordering for the night.

No, your family’s weird.

Maybe we can agree on this. The real problem with sharing restaurants is the little speech the servers give you about what sharing means. You know the one:

“Good evening. Have you dined with us before? Everything on our menu is designed for sharing. We recommend 4-5 small plates per person. There are only 14 choices on the menu, so with a party of four I literally have no idea what you should do. We also have three “large plates” which are similar to old-fashioned entrees except they don’t come with a starch and a veggie. Although we do charge the same. And of course all of the dishes will come out when they’re ready. We don’t know when that will be. The only thing we can guarantee is that no matter how many dishes you order, they’ll all be delivered to your table within 45 seconds of each other.”

At this point, I think they can retire The Speech. It’s like restaurants that still feel they need to explain what tiramisu is WHEN WE ALL KNOW (“We also have our tiramisu this evening, which is lady fingers dipped in coffee, layered with whipped mascarpone cheese and dusted with cocoa powder”). At some point, the vast majority of us shouldn’t have to listen to these speeches just because a few laggards aren’t paying attention.

But I digress. The point of this post is to talk about a couple sharing restaurants that recently opened in DC by two of our top chefs: Haidar Karoum, known for his work at Proof, Estadio, Doi Moi and Asia Nora, opened Chloe near the Navy Yard, and Erik Bruner-Yang of Maketto and Toki Underground opened Brothers and Sisters in the ultra-hip The Line Hotel in Adams-Morgan.

Both restaurants offer a mixture of small plates and a few large plates drawing on flavors from around the world. But there are real differences if you’re trying to decide between the two. If your priority is food, I’d give the nod to Chloe. If you’re looking for a buzzy scene, definitely head to Brothers and Sisters.

Service is a tie. Both have friendly, helpful servers. Unfortunately, they both also make you sit through The Speech. Argh. 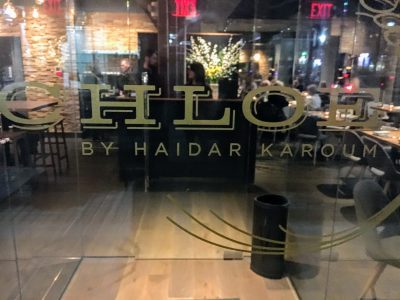 The entrance to Chloe

Chloe’s vibe is hard to pin down. The plants above the kitchen (see below) is literally the only decorative element. “If IKEA opened a fern bar” is the best I can come up with. 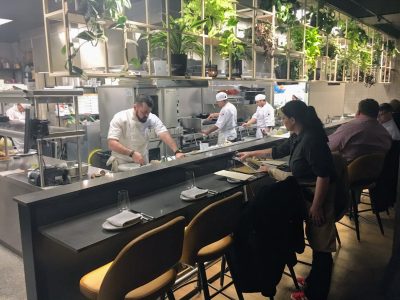 If you read my last post on Requin, you know that seeing the Executive Chef in the kitchen sets my heart a-flutter. 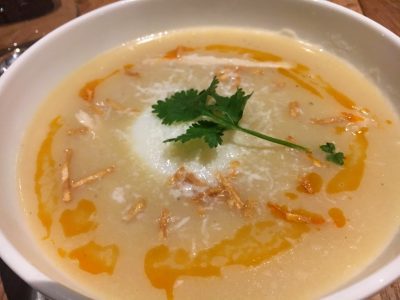 Masa soup was new to me but that’s exactly what this is: a bowl of liquid masa. The soft-cooked egg makes it viscous-on-viscous. If you love the deep corniness of masa — and I do — you’ll find it slightly odd but comforting. If you’re not a masa fan, you may just find it slightly odd. 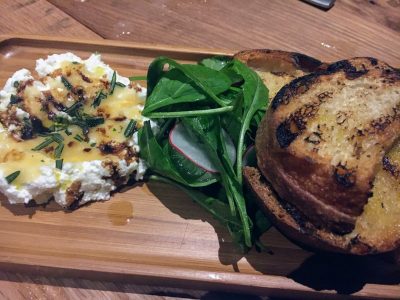 A simple dish like this requires the elements to be spot on, and here they are. The bread is crispy, chewy and smoky, and the cheese is fresh, herby and slightly sweet. Apparently “really raw honey” is just a brand name, which was a huge relief. For a second, I thought I’d been eating moderately raw honey all these years. 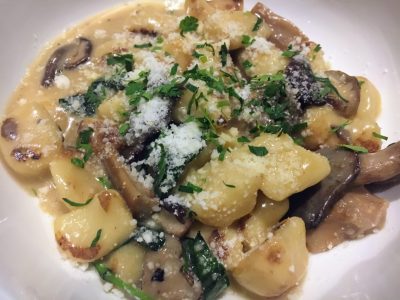 Classic preparation done right. Goes down as smoothly as Sade on a set of velvet headphones. 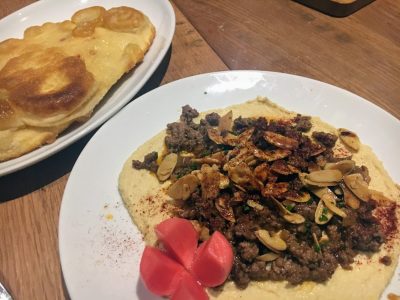 Could become a signature dish. The hummus, seasoned beef and almonds are terrific and the naan is even better. Someone online said the beef tasted like something you’d get at Taco Bell and they’re not wrong. They meant it as a compliment and so do I. 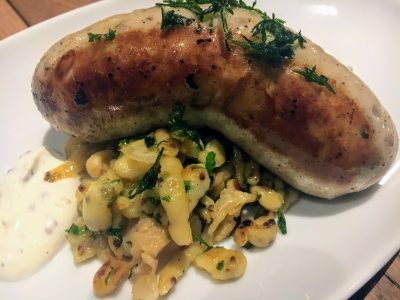 A last-second impulse order turned out to be my favorite dish of the night. The finely-ground sausage is juicy and redolent of mace, coriander and white pepper. Spaetzle is to me what pearls are to Barbara Bush — they go with everything. 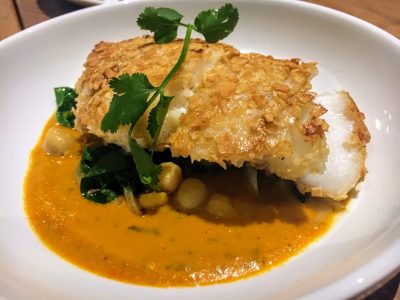 The complexity and spice of the curry works well with the blank slated-ness of the cod. And crushing the papadam to provide a crunchy crust is a clever move sure to get applause from the Chopped panel. 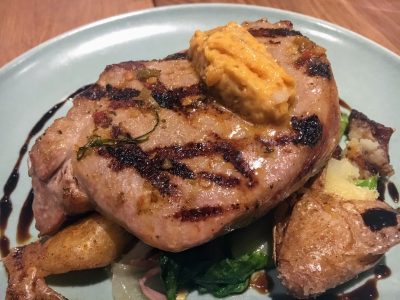 Kudos to whoever was tending the pork station the night I was there. Thick pork chops are hard to cook well and they nailed it. Kudos too for Chloe’s decision to add some carbs and veggies to the large plates rather than relegating diners to a la carte hell. 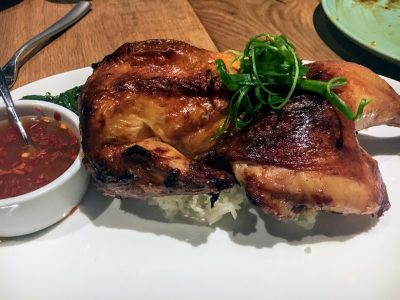 Beautifully burnished skin and well-cooked meat. The overwhelming flavor is 5-spice powder, which benefits from the tangy chile-lime dipping sauce. 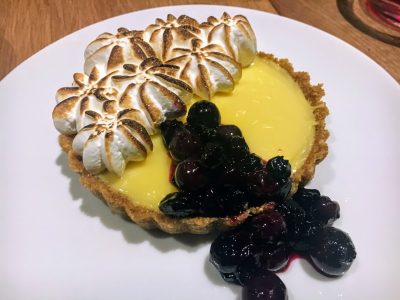 Meyer lemons are less acidic than regular lemons. That doesn’t necessarily help this dessert which could use a bit more acidity to cut through the sweetness of the meringue and blueberry relish. 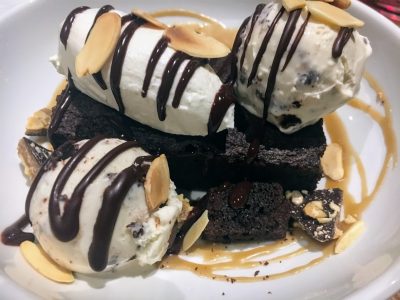 Crowd-pleasing no-brainer that delivers the goods. 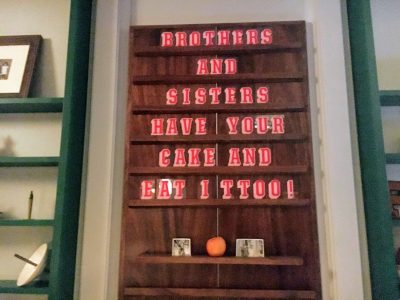 Before we get to the substance, let me get a couple minor annoyances out of the way. First, Brothers and Sisters doesn’t have a menu on its website. In this day and age, there’s no reason for that. Second, when you sit down and eventually get handed a menu, it runs in reverse — desserts first and appetizers in the back. Both of these practices get a mandatory half-point deduction from the judges for pretentiousness. 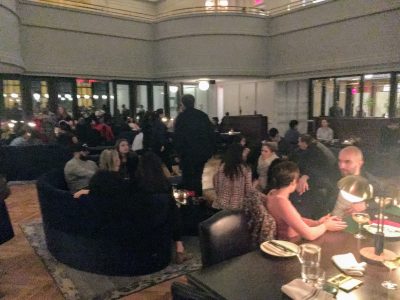 It’s quite a party with couches and communal tables spread throughout the hotel lobby (a converted church). The over-30 crowd looking for a smaller table and less commotion will be happy to be escorted to the dining areas behind the glass partitions on either end of the room. 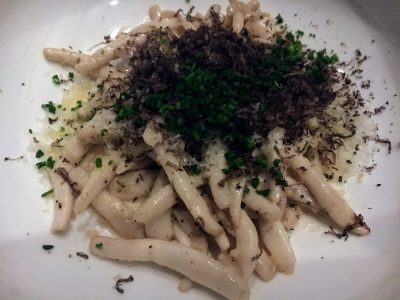 Those aren’t noodles; they’re mushrooms. A nice dish but even the truffle shower wasn’t enough to make it craveable. 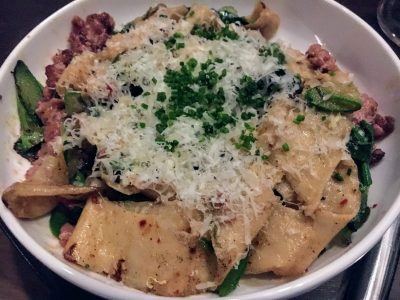 Another good dish that somehow should be better. The individual elements are all solid but it feels like Bruner-Yang is pulling his punches. I find myself wanting a little more Maketto — some heat, herbaceousness or funk. I know he’s trying to do “clean” food at Brothers and Sisters, but clean still needs some oomph. 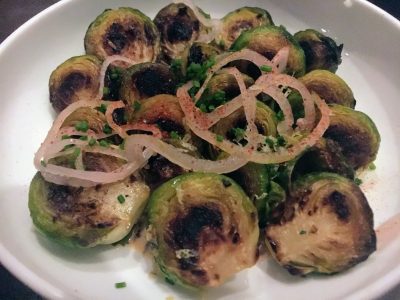 Cute presentation, the sprouts lined up like little burnt soldiers. 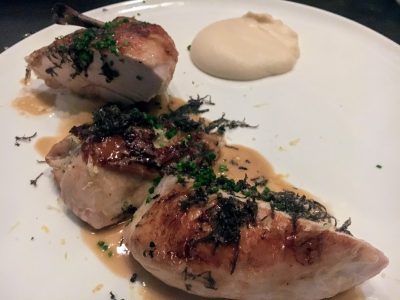 Tom Sietsema called this chicken tepid and the plop of celery root puree “sad on sad.” He’s largely right, even though the chicken was artfully de-boned and actually nicely cooked. But at $32, it needs to do better than that. 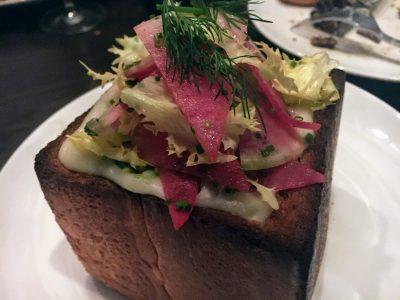 Much closer to chicken pot pie filling than a chowder but still pretty tasty. The best part may be the milk-bread dish. Break off a piece off the sides for a crispy pot-pie vibe, or scoop down to the soft insides for more of a chicken-and-dumpling feel. 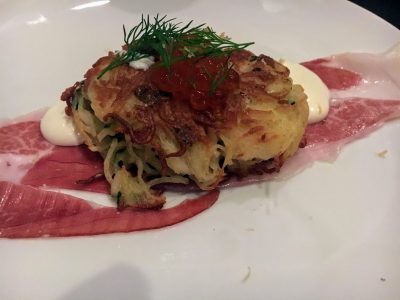 Basically a potato latke. I’m still an applesauce guy but I admit the prosciutto and salmon roe is classier. 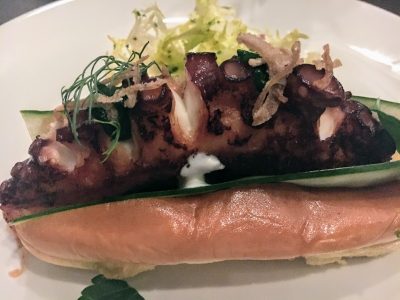 This “octodog” is an Instagram sensation, combining a compelling visual with the element of surprise. I actually thought it would be some sort of sausage made from octopus but it turns out to be just an octopus tentacle dropped into a hot dog bun. Still, the tentacle is well-cooked and nicely charred. 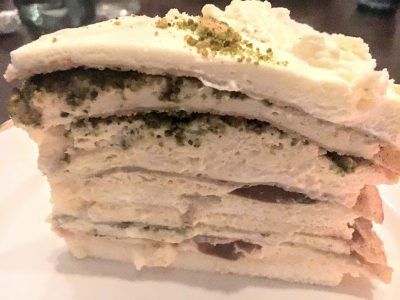 Buckwheat crepes and two kinds of tea provide not-too-sweet depth. Unfortunately, uneven layers makes it hard to get consistent bites of crepes and white chocolate filling and eventually no one wanted to finish the plate of pure filling. 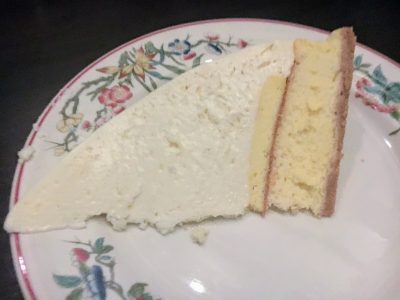 Cheesecake made with three cheeses. Again, more impressive visually than it tastes. 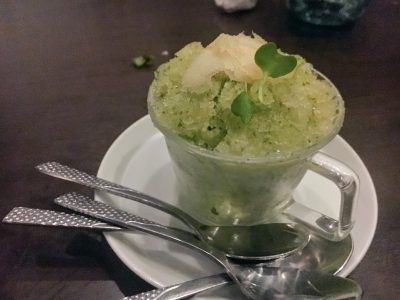 Maybe the best dessert is the simplest (and at $5, the cheapest).

I think I’m done with upscale-hipster sharing places for a while. Tonight I think I’ll go to Rockville for Chinese. My only fear is that the grizzled Chinese waiter will come to the table and announce in a sing-songy voice: “Everything on our menu is designed for sharing. We recommend 1-2 dishes per person and they’ll come out as they’re ready. Now, can I send the mixologist over to discuss your cocktail options?”