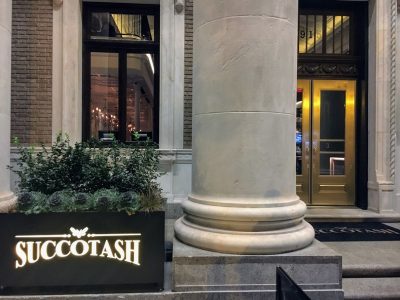 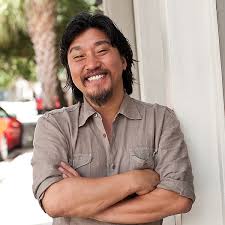 It was headline news in the foodie world earlier this year when Brooklyn-born celebrity chef Edward Lee moved his base of operations from Louisville to Washington DC. Just this month, the New York Times ran a profile of Chef Lee that talked about how he had offers to go to New York or Chicago but ultimately decided on DC. It was like we won the lottery. But let’s not get ahead of ourselves. The last time DC won the lottery we drafted Kwame Brown.

Happily, Succotash is no bust. Much of what’s put in front of you will make you happy. But I can’t help thinking that if Chef Lee had come to town five years ago, his Korean-influenced Southern fare would have been a revelation rather than just another face in the crowd. Korean-fusion seems to be everywhere these days. Himitsu’s karaage fried chicken. Kyirisan’s creme fraiche chicken wings. Hazel’s kimchi gnocchi. Anything at ChiKo. You can keep reminding yourself that Chef Lee was cooking this food before any of them, but in the end a gochujang glaze is still a gochujang glaze (as I’m sure we’ve all said a thousand times). 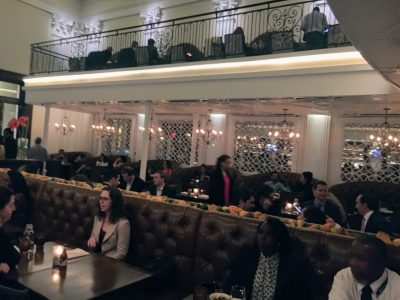 Succotash occupies a converted bank building. The interior is light, airy and open, which could explain why no one wanted to leave their money there.

As for the food, my best advice is this: go for lunch. A fried catfish sandwich with slaw and a side of good fries is more satisfying and gets less tedious than a school of fried catfish on a plate. Same with fried chicken. For some reason the dinner-only dishes are more uneven than the lunch-only dishes or the dishes available on both menus. Below, I specifically note the lunch-only and dinner-only dishes; those without specific notation are available at both lunch and dinner. 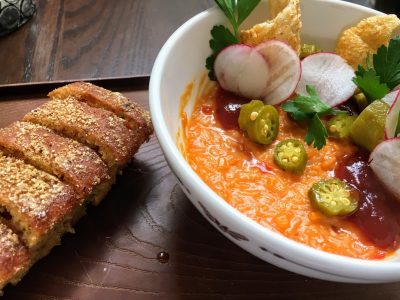 There must be pimento or maybe gochujang (Korean fermented red-pepper paste) in this dish of gooey cheese, but they’re background notes. That makes the various toppings critical for adding flavor. It also makes the pork rinds a better conveyance medium than the blander popcorn bread. (Speaking of the popcorn bread, the New York Times reported that it’s made with finely-ground popcorn and the kind of artificial butter-flavoring you’d turn your nose up at if you were at a movie theater. It’s like the old commercials where Folger’s Crystals were substituted for the coffee at fancy restaurants. Amaze your friends by telling them you taste something artificial and then asking your server whether they use real butter in the bread.) 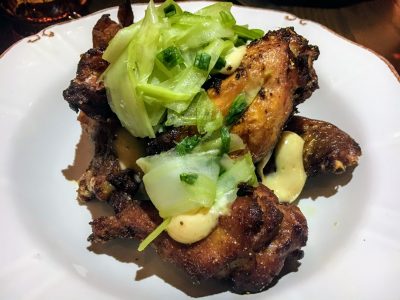 Moist and meaty with a mild smokiness, these wings are a solid starter even though they don’t compare to Federalist Pig and some of the other top-tier BBQ wings in town. 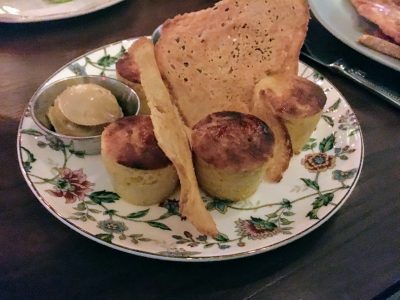 The Weisenberger family has been running a mill in Midway, Kentucky for six generations. The name sounds like a mash-up of Jewish surnames but unfortunately there’s no indication that the Weisenbergers are in fact Jewish. But they do turn out some legit cornmeal. The cakes themselves are very good with slightly sweet, crispy edges. The sorghum butter is excellent. The cornmeal crisps add little value to the plate other than height. 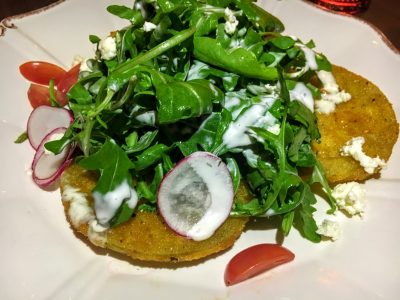 Tangy green tomatoes are well-fried with just the right ratio of tomato to breading. The arugula, radishes and feta are nice accompaniments. I do wish the buttermilk dressing brought more to the party than creaminess. 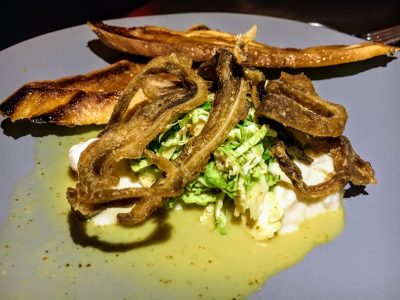 I like the components separately, but this dinner-only dish was a miss. The elements didn’t come together and proved extremely difficult to eat (particularly the pig ears which are hard to cut). 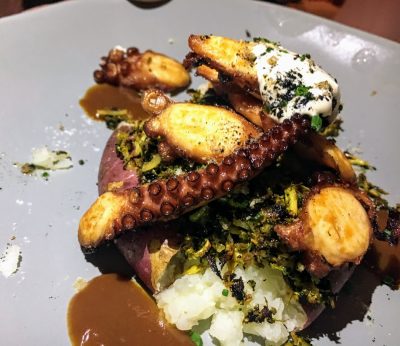 Another dinner-only dish that didn’t deliver. The octopus was nicely cooked but must have wondered how it ended up on this plate that eats like a stuffed baked potato. 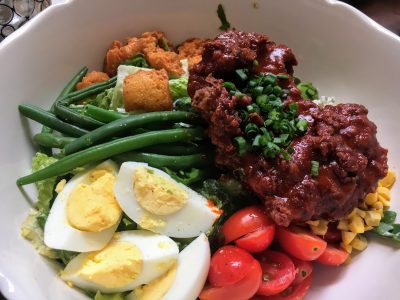 Rustic, hearty Cobb salad, contains a boneless fried chicken thigh with honey-gochujang sauce. The sleeper is the bacon jam lurking somewhere at the bottom of the bowl that infuses everything with smoky-sweet magic. 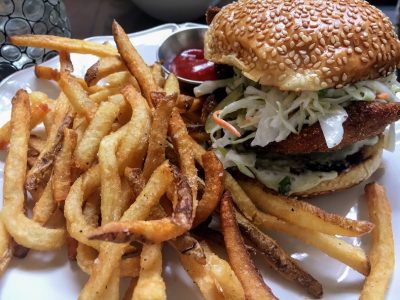 Another satisfying lunchtime option. Delicious fried catfish, cooling, crunchy slaw, tangy house-made pickles, textbook sesame seed bun, plus some pretty great fries. All for $14. My one nit is the addition of gochujang to the ketchup. Maybe every plate needs a Korean element but I was heading into gochujang overload at this point and the addition doesn’t improve on Heinz. 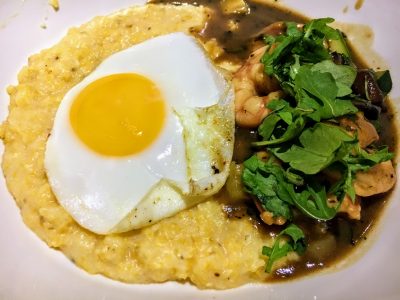 A lighter rendition of the classic dish, the “red-eye” coffee-based gravy less rich than the traditional butter-based sauce and the grits less dense than the other grits on the menu. That makes this dish a bit less luscious than other versions, but it’s well-balanced and may leave you some room for dessert. 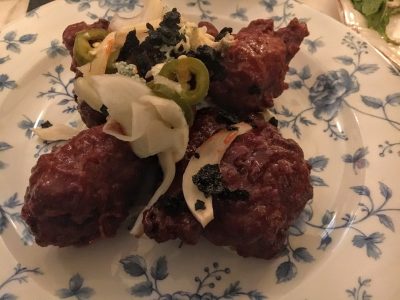 This is the Korean-fusion fried chicken on the menu (there’s also a traditional fried chicken and waffles). Very well-executed. Still, I’d rather pay $17 for the lunchtime dirty-chicken Cobb than $23 for this plate at dinner. 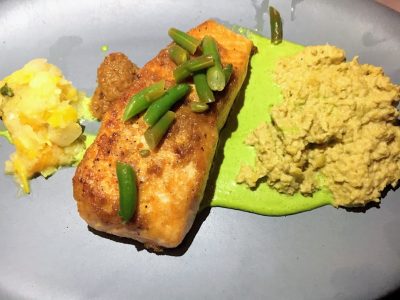 With so much going on, a surprisingly unexciting dish. The components feel so disjointed that the plate should have had separate compartments like a TV dinner. The salmon was overcooked and the edamame grits tasted more like hummus than grits. The best thing on the plate may have been the white kimchi. 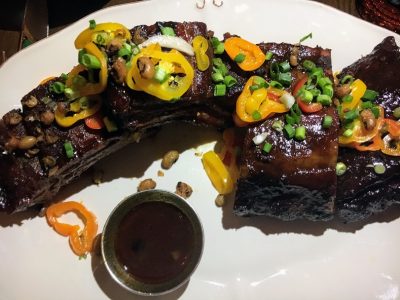 A real disappointment. The opposite of ribs where the meat is so good you feel guilty about adding sauce. Here, the dull meat needs as much sauce as it can get. 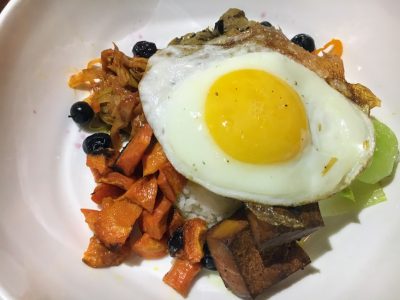 Not terribly exciting but not bad vegetarian entree (add an egg if that fits your lifestyle). The BBQ leeks are particularly good. 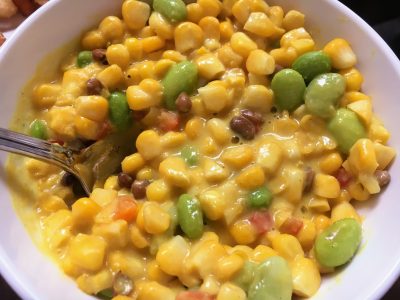 Definitely order a side of this at lunch or dinner. The corn is crisp and fresh. The coconut-curry sauce is just right. And the substitution of edamame for the traditional lima beans is a welcome switch. Then again, lima beans is one of the few things in this world that I really can’t stand — looking at you, too, baby corn — so you could substitute almost anything for lima beans (except baby corn) and I’d call it a welcome change. 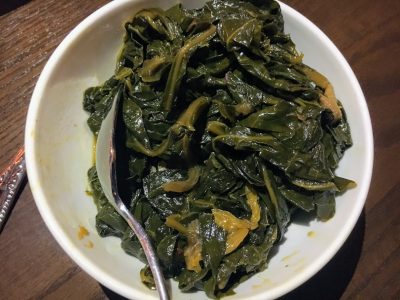 Tastes pretty much like straight greens and that’s fine by me. Some good acidity makes them a solid addition to just about any entree. 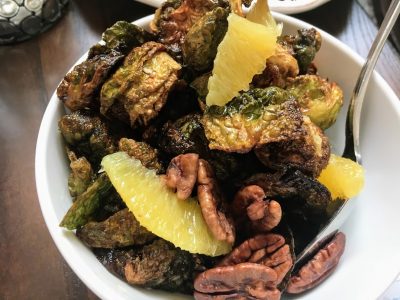 Good crispy sprouts that don’t really need the pecans or the citrus. 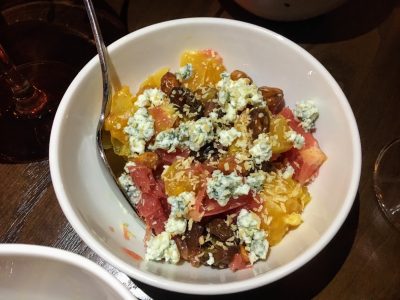 I feel the pain of the prep-kitchen worker who drew the short straw of cutting the citrus segments. Not sure this dish technically qualifies as “ambrosia” without marshmallows, but if you’re a blue cheese fan, it’s not bad. 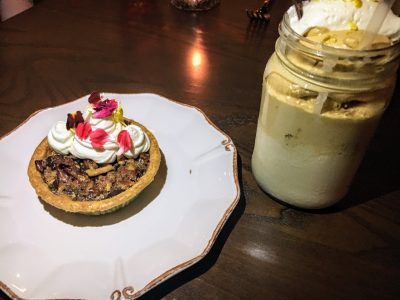 One of my tablemates thought the chocolate pecan pie was the star of the evening. I thought it was too chocolatey, but then again I’m not a huge chocolate person so take that for what it’s worth. I personally preferred the slightly boozy milkshake with pieces of cake that get broken up and incorporated into the shake like a liquid form of cake and ice cream.

So here’s my suggestion. Go for lunch. Order some chicken wings or maybe the pimento cheese to start. Then get the Dirty Chicken Cobb or one of the sandwiches — catfish, fried chicken, hot brown or the burger. Try some Succotash Curry and Collards on the side. Dessert is optional.

Do that and you won’t be sufferin’ at Succotash. (Sorry, I made it all the way to the end of the review but couldn’t resist.) 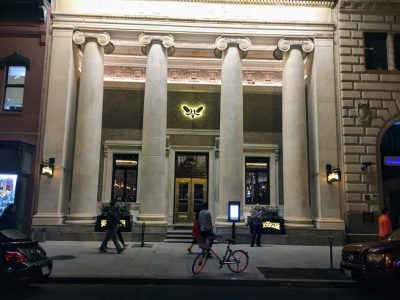