The country, as I’m sure you’re aware, is going to crap in a crap-basket. And it could get worse. We may be heading into a brutal second COVID wave and a constitutional crisis of epic proportions. Given the existential crises we’re facing, I thought now would be the perfect time for one of my blog posts ruminating on the frustrations of floppy take-out fries and how we’ve regressed as a nation because McDonald’s solved that problem fifty years ago. And I’m only half-joking. Because you know what? You still gotta eat. Yes, we’re dealing with unprecedented upheaval, but it won’t do us any good if we’re hungry on top of everything else. And here’s the kicker. Since you have to eat anyway, you might as well make it something good. It doesn’t take any more time to order something new and exciting than to ping DoorDash for yet another Chipotle barbacoa burrito with white rice, pinto beans, cheese, half-fresh tomato salsa and half tomatillo-red chili salsa, lettuce, sour cream, and added guac, an order you feel a tad guilty about because you’ve done the online calorie counter but we’re in the middle of a pandemic so what the hell. Or so I hear.

It’s in that spirit that I wanted to highlight some of the best restaurant dishes I’ve eaten over the past couple months. Several are local but others are from my summer vacation near Rockland, Maine and Brooklyn, NY, where we stopped along the way to pick up my daughter. I’m including them not only because one day to may find yourself hungry in one of those places, but because it felt almost normal to be away in late August and I want to wallow in that.

Best Pork in a Starring Role 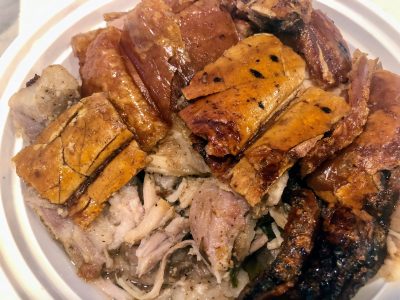 Excellent Filipino food in a small storefront near White Flint mall (or what’s left of it). You can find a longer review here but besides this succulent lechon belly with ultra-crisp skin, favorites include Papa B’s fried rice (see below), the pork & shrimp lumpia, the pork belly sisig, and the sweet pork Longanisa sausages. I don’t believe Kuya-Ja’s delivers, but they have a very good hands-free pick-up system. 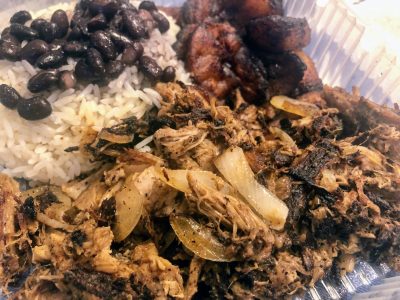 I’ve spent a lot of time in Key West and Miami over the years and I’ve eaten a lot of Cuban food. This lechon asado from Mi Cuba holds its own against any of them. The moist pork and onions are crisped before serving for extra savor. Speaking of browning, be sure to order the sweet plantains as one of your sides. They’re deeply caramelized to that exquisite point just before browned becomes burnt. You can order Mi Cuba delivery on Postmates.

Best Pork in a Supporting Role 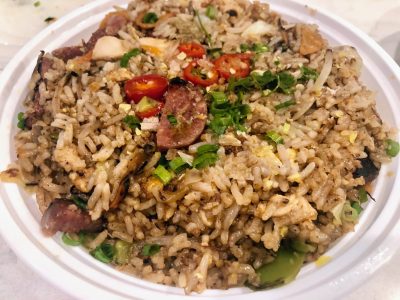 When I did my fried rice survey a while back, I didn’t expect a fast-casual Filipino restaurant to come in at #2. There’s a lot to like about this dish but what really puts it over the top is the homemade Longanisa sausage and the generous use of crab fat “butter” — artful branding you have to admire for something that’s basically pureed crab guts and roe.

Best Chinese in Bethesda (aka Damning by Faint Praise) 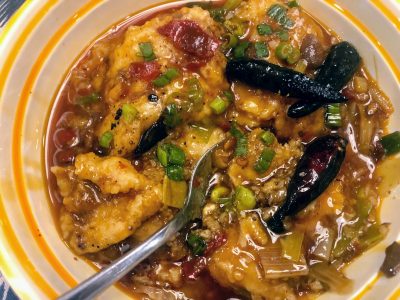 Halibut in Hot Sauce at Wang Dynasty in Bethesda

Bethesda can’t compete with Rockville or Fairfax when it comes to good Chinese food. True, we have Q by Peter Chang, which I have mixed feelings about that I won’t go into during the pandemic except to say, as I wrote last year, that Fairfax did better with Mama Chang. My hopes went up when Wang’s Dynasty opened last year by the same family that ran the very good Michael’s Noodles in Potomac, but my first couple visits were unremarkable. Then last week I hit the motherlode, starting with this excellent halibut in (not too spicy) hot sauce with leeks, cabbage, and celery. Throw in some first-rate shrimp with black bean sauce, pan-fried dumplings, and Szechuan green beans, and I’ve got a reliable toehold for exploring of the rest of the menu. You can order delivery from Wang’s Dynasty on GrubHub.

[Breaking News!….(real breaking news, not that CNN bs)… Today ChiKo announced they’ll be taking over the former Prima space on Woodmont Ave and yesterday Jose Andres announced he’ll be transforming the Bethesda Jaleo into a second location of his acclaimed Spanish Diner. As a long-suffering Minnesota Vikings fan I know we can still screw this up, but along with recent arrivals like Wang Dynasty and CherCher Ethiopian, maybe, just maybe, Bethesda can finally have nice things.] 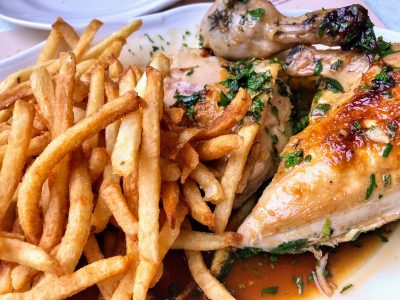 Le Crocodile is messing with my mind. On the one hand, it’s my favorite restaurant I’ve eaten at this year (admittedly a much smaller field than usual) and turns out the kind of beautifully-executed bistro cooking I could eat over and over again. It’s what Le Diplomate might be if it were half the size and could do more careful cooking. Unfortunately, it’s 232 miles from my house. Which explains the recurring dream where I’m standing in the misty dawn near Beltsville staring up I-95 like a famished French Lieutenant’s Woman, hoping against hope that the next oncoming truck has a “DC or Bust” sign in the windshield and Le Crocodile’s chef at the wheel.

Best Veggies in a Salad Role 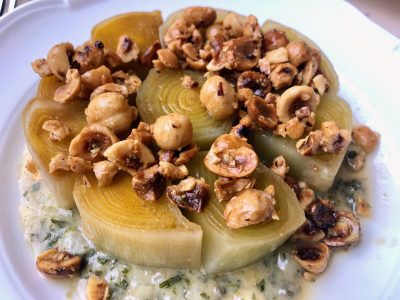 Leeks with Vinaigrette and Hazelnuts at Le Crocodile, Brooklyn NY

I don’t even like hazelnuts. Damn you, Le Crocodile. 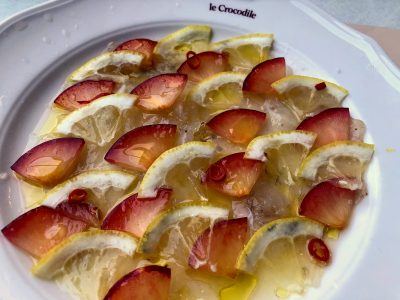 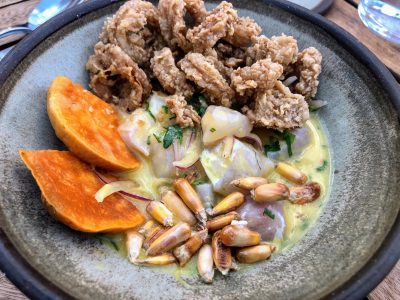 This ceviche was featured on the Peruvian food episode of Padma Lakshmi’s “Taste the Nation,” and for good reason. It’s beautifully balanced — the pristine seafood, the textures, and above all the drinkable sauce that’s a symphony of acid, creaminess, herbaceousness, and heat. 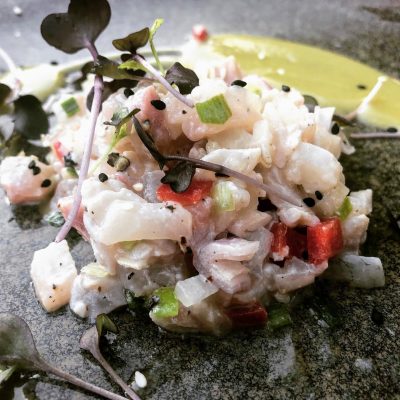 Sitting in the parking lot of a restaurant in Vienna doesn’t sounds promising, but it’s one of the most civilized outdoor dining experiences in the DC area. Unlike some places with smaller patios that set tables exactly six feet apart, Clarity gives you plenty of elbow room. The food is equally lovely, particularly anything from the sea, any of the salads, and the BBQ chicken. 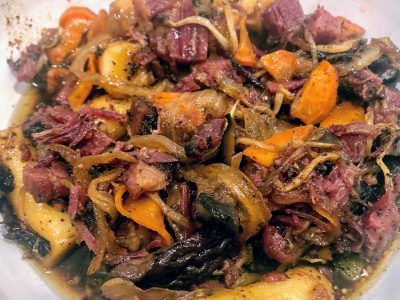 The culinary wizards at ChiKo came up with this riff on their iconic smoked brisket with furikake butter and rice. I’m a sucker for rice cakes and smoked meat in any form, so hearing that ChiKo was pairing the two was like Ron Swanson hearing that Outback’s latest topping for its porterhouse is a pork chop. 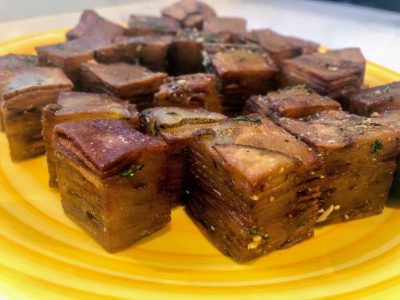 Michael Rafidi opened Albi, his ode to Levantine cooking, just before the pandemic hit. Then, during the pandemic, he launched Yellow inside Albi for morning and lunchtime carry-out. You can get some great pita sandwiches at Yellow and the same excellent hummus they serve at Albi. But what made me happiest was reuniting with these salty, fried architectural marvels I first encountered at Arroz, where Rafidi cooked when he first came to town. They were so simple and yet I couldn’t imagine trying to duplicate them at home. When Arroz closed, along with the rest of Mike Isabella’s empire, I thought they were gone for good. But their disappearance, like Dave Chappelle’s, only made their return that much better. 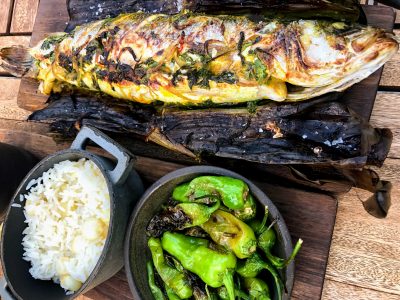 Hands down, the best branzino I’ve ever had, perfectly-grilled, chockfull of herbs, and de-boned for easy eating. It comes with a lovely curry sauce for extra lily-gilding. 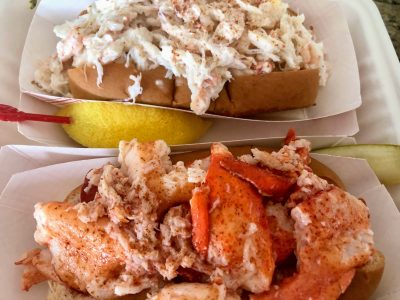 Crab and Lobster Rolls at Claws, Rockland ME

Hot takes from two weeks in Maine: (1) 50% of lobster rolls are a tad tough and stringy, but 100% of them make great Instagram pics; and (2) crab rolls and fried scallops are underrated.

Best Pizza in an Unlikely Location 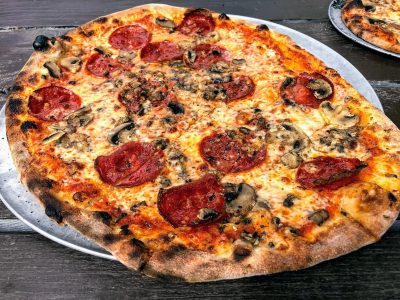 Pepperoni and Mushroom Pizza at Flatbread Co, Rockport ME

Thin, crispy, and slightly charred, this was my favorite pizza of the summer. In DC we seem to mostly have floppy Neapolitan or, more recently, uber-heavy Detroit-style. They’re both good, but what I really crave is thin-crust “tavern style” pizza, the kind often cut in squares that they make at institutions like Vito & Nick’s in Chicago (Timber Pizza may be closest locally). If you don’t feel like you could eat the whole pizza, you’re not doing it right. 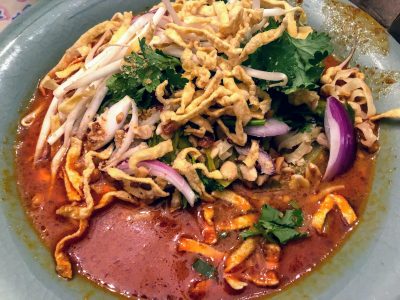 Great Thai food in Maine? In Portland, sure. That wouldn’t be surprising. But up the coast in Camden? The most exciting thing to come out of Camden is the ferry to North Haven. And yet, there I was, sitting on a nondescript side-street about a mile from the center of town, tucking into some of the best Thai food I’ve had in recent memory. 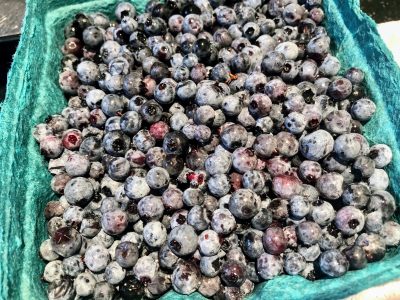 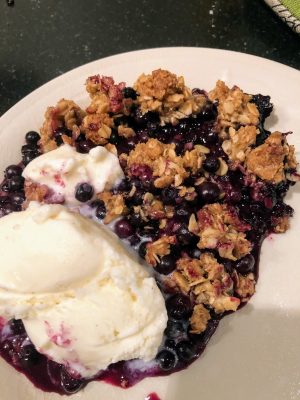 Emma’s pop-up is over, but we’re taking pre-orders for next summer. Which may not sound like much, but in today’s world constitutes an act of faith that there’ll be a next summer. And when we get there — and we will — that blueberry crisp is going to taste extra sweet. Because it’ll be a comforting reminder that once again Maine has turned blue.