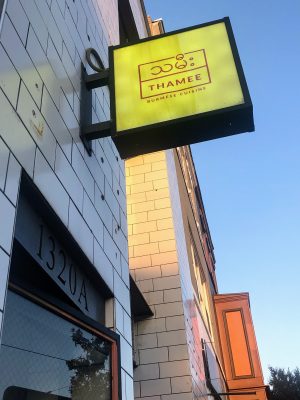 This is the week I got my groove back. Thamee and Taqueria Xochi reminded me how much I love searching for that perfect bite and the absolute thrill of sometimes finding it. Suddenly I was Anthony Bourdain again, intrepidly connecting with people and cultures through food, as opposed to what it’s felt like these past eighteen months: Andy Dufresne down in The Hole shuffling to his cell door to retrieve whatever warmed-over bowl of gruel DoorDash left for me there.

Thamee serves Burmese food and Xochi serves Mexican, but they have a lot in common. They’re both led by immigrant women who serve as both executive chefs and co-owners. Both put out soulful, flavor-forward food that celebrate their respective roots. And both are fast-casual operations where you don’t place your order with a server (I don’t consider fast-casual a pejorative term — see southeast Asian street markets, Texas barbecue joints, Katz’s pastrami sandwich, and arguably even sushi bars). 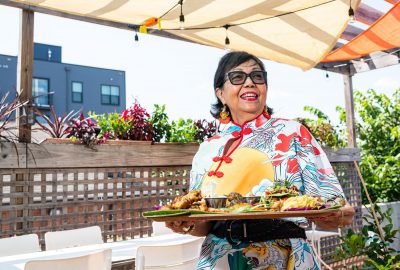 Somehow I never got to Thamee before the pandemic hit. It opened its doors in 2019 and seemed to lead a charmed life, with glowing reviews and a James Beard nomination in February 2020 for best new restaurant in the mid-Atlantic. A month later, of course, everything shut down and Thamee, like so many restaurants, went went into survival mode and offered takeout and delivery only.

Thamee finally re-opened for in-person dining this summer as a fast-casual operation (largely due to pandemic-related labor issues). But it’s a different kind of fast-casual. You don’t order from a counter. Walk upstairs and find a table in the dining room or out on the lovely back deck. Then use a QR code to open the menu and place your food and drink order along with your table number. The waitstaff will deliver your order just like a full-service restaurant (albeit one that uses disposable plates and cutlery). Then, when you’re done eating, just stroll right out: your credit card has already been processed — including a 30% service charge to support a livable wage, health care, and profit sharing for staff — and your receipt is already in your inbox. It’s like when I first used Uber and just got out of the car and walked away. You mean I don’t need to wait for the server to run my credit card, calculate a tip, have the pen stop working, scribble furiously to get the ink flowing again, and then make sure I don’t forget my card and have to come back for it? Um, yes, that’ll work just fine.

But as much as I appreciate Thamee’s back story and pain-point solutions, the food is the star of the show.

Chef Jocelyn Law-Yone’s cooking — dad joke alert — had me mooning over umami with ingredients like dried shrimp, fish sauce, mushrooms, lemongrass, and tons of fresh herbs showing up in multiple dishes.  It’s less spicy — at least the dishes that I tried — and more on the funky and fermented side. So dishes that sound familiar, and even look familiar, can taste like something completely new. Take the white flower mushroom salad. I’d never even heard of white flower mushrooms, but once I had this salad, I wondered where they’d been all my life. They look a bit like artichoke leaves but they have a supple gelatinous mouthfeel like wood-ear mushrooms. And they soak up the dried shrimp and other components without losing that great texture — even for breakfast the next day. I had similar revelations with the eggplant, the grilled pork meatballs, and the catfish soup noodle. Each sounded like something I’d had before but the dish that showed up felt completely fresh.

My only regret is that I didn’t order more. But Sonia was out of town and I was eating alone. The nice couple sitting next to me had ordered four dishes and looked to be about halfway through their meal when I was putting my order in. So I figured I could legitimately match them by ordering four dishes, and had just about convinced myself to squeeze in a fifth when the guy leaned back in his chair and loudly declared himself “totally stuffed.” Oh crap, I thought, please please please I need his girlfriend — who was still eating — to explain to him to shut the fuck up.  But she didn’t. She agreed with him and suggested they take the rest home. Ok, I thought, this can still work as long as they clear out before my food shows up. But as he got up to fetch some takeaway containers she asked him if she should order two more glasses of wine, and he said great, let’s hang for a while. Yes, I thought, I’d love to see you both hang for a good long time, as I tapped a glum finger to cancel the crispy gourd fritters. 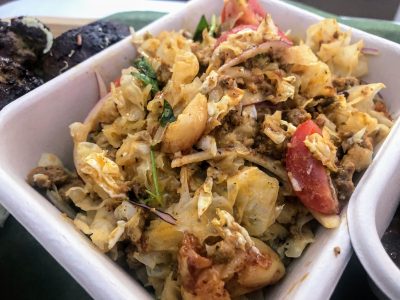 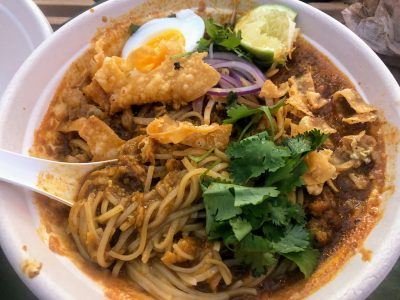 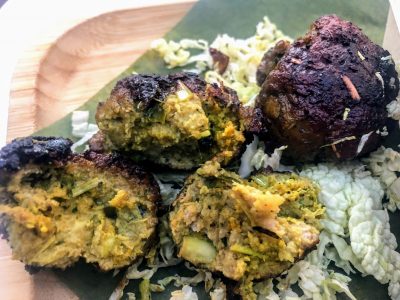 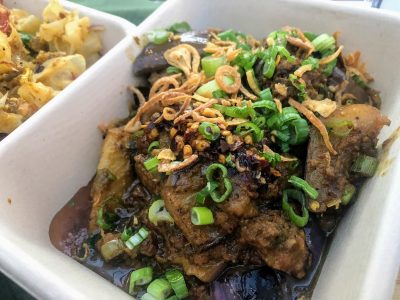 Teresa Padilla opened Taqueria Xochi during the pandemic in 2020 when she was furloughed from her job as pastry chef at Jose Andres’ China Chilcano. In some ways this slip of a restaurant is perfectly suited for Covid. There’s no indoor seating. You place your order on your phone or at the outside window where the orders are called out when they’re ready. There are some tables out front but most people seem to take their food to go. And it does travel well. Mine made the 25-minute drive home in very good shape. I just stuck the birria broth in the microwave for a minute and I was good to go.

Xochi is best known for its cemita sandwiches and birria tacos. Cemita sandwiches, for those unfamiliar, originated in Puebla and are often served by street vendors who specialize in them. They’re one of those great messy sandwiches, here anchored by a cutlet (chicken, beef, or eggplant) and topped with avocado, beans, tomatoes, and onion. Cemitas are similar to tortas but they have two additional key elements: a covering of stringy melted Oaxacan cheese and a specific type of round bread topped with sesame seeds. It’s all about the components on a sandwich like this, and the freshly-cooked cutlet and other ingredients on Xochi’s cemitas are first-rate.

Anyone with an Instagram account has probably seen plenty of birria tacos over the past couple of years. They’re just so photogenic, with vivid reds and yellows and the drippy action shots of the tacos being dunked into the side of consommé. The birria at Xochi is a step above most. The long-cooked beef is moist and deeply-flavored and the broth is drinkable on its own. The guac at Xochi is fine but the freshly-made chips are terrific. Xochi also offers nine type of tacos other than birria and meat and vegetarian versions of tlayudas (like a big tortilla pizza). And, of course, given Chef Padilla’s pastry bona fides, don’t miss dessert — a tres leches cake, a chocolate flan, and bunuelos (crispy dough fritters) with sugar, cinnamon, and milk. 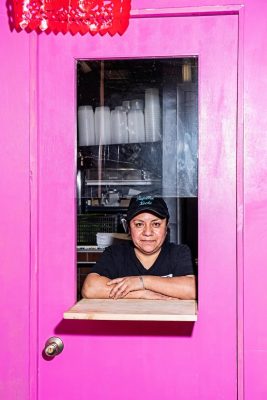 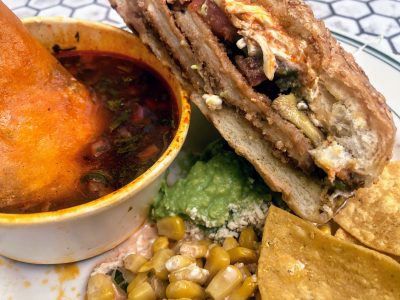 So that’s the story of How Rick Got His Groove Back. Please don’t @ me to point out the differences with the movie. I never saw it. My understanding is that the Angela Bassett character was feeling a bit down and got her pep back by trying something new and exciting. Sounds same-same to me.