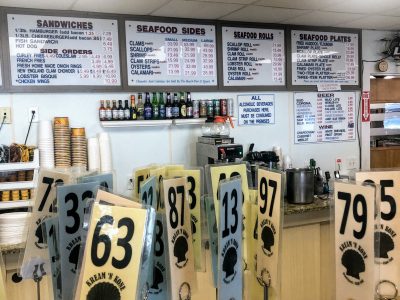 I’m a few days late because I just got back from Cape Cod where I expected to have so many delicious things to eat that I’d have a hard time culling through them for this post. Turns out, not so much. I’ve been spoiled by my recent summer vacations in Maine, where the water isn’t quite as warm but the food is a whole lot better. The Cape — or at least the Hyannis/Yarmouth area where I stayed — is a throwback to a simpler time. I know the JFK legacy means a lot to the area but freezing food options circa 1963 seems excessive. The local coffee shop is Dunkin’. The local bagel spot is Dunkin’. And the local donut trade is so locked up by Dunkin’ that they dropped the “Donuts” completely in 2019 — like Burger King and Taco Bell would ever have the cojones to go by “King” and “Bell.” Ironically, I never made it to Dunkin’ because I didn’t feel like a toasted coconut donut, which is the only really solid order. I know, I know, the coffee is decent and I do like the motto: “If you like Chock Full O’Nuts we may be worth a shot”.

But while the Cape proved disappointing, thankfully we drove there and back and ate very well along the way. 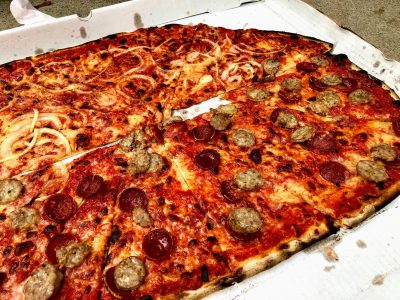 Stopping for pizza in New Haven was more than just lunch for me. It was a pilgrimage. I’m a thin/charred-crust kind of guy and nobody does that style better than New Haven. Frank Pepe’s and Sally’s Apizza are two of the most venerable spots and stand only a couple of blocks from each other. Since Pepe’s is scheduled to open a branch next year in Montgomery Mall, I opted for Sally’s. And it was terrific, with great char from the 1930s-era coal oven and just the right amount of toppings to complement the crust. Those slices may look big but they go down easy. Next time you’re driving through New Haven, do yourself a favor and don’t settle for the local 5 Guys right off the highway. Take the extra ten minutes to head into town for a lunch to remember. Plus, unlike 5 Guys, you won’t have to endure the guilt of the four-digit calorie counts staring you in the face when you order. 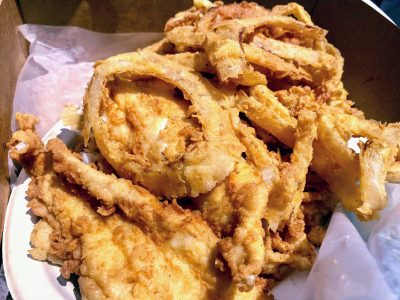 My favorite restaurant meal on the Cape was from Kreme ‘N Kone, a humble seafood fry-shack opened in 1953. You can see the classic counter operation at the top of the post. This is a not-great photo of the combo plate with fried flounder and clam strips snuggled in a cozy onion ring blanket. It’s simple, perfectly-fried, and exactly what you want at the beach. Or at least I do, because all that fried food makes me sleepy and I can go back to the Airbnb for a nap. 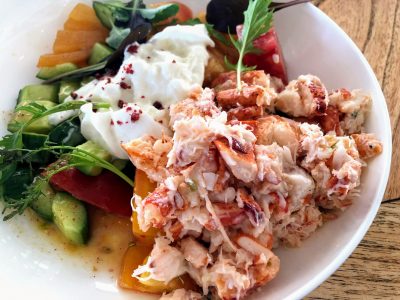 You might have heard that lobster prices are sky-high this year. I include this tomato-burrata salad with added lobster not because it was so amazing (it was good) but as a cautionary tale. Here was my discussion with our waitress at lunch:

Me: I’ll have the tomato-burrata salad

Waitress: The lobster is great.

Waitress: You got it.

Me when the check comes at the end of the meal and I realize that the $18 tomato-burrata salad cost $52 with the added lobster: On second thought, I’ll have the chicken. 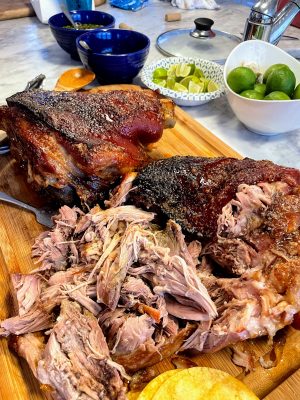 Momofuku may have closed up shop in DC but its Bo Ssam lives on (recipe here). I made these on the Cape for my extended family of 18. It takes very little hands-on cooking and is always a huge hit. Bo Ssam is basically pork butt that you roast low and slow until the skin crackles and the meat is pull-apart tender. Then you swaddle it in a Bibb lettuce leaf or tortilla and top it with an addictive ginger-scallion sauce. When the lettuce and tortillas are gone, protocol requires standing at the cutting board and using your fingers to pick directly from the carcass. 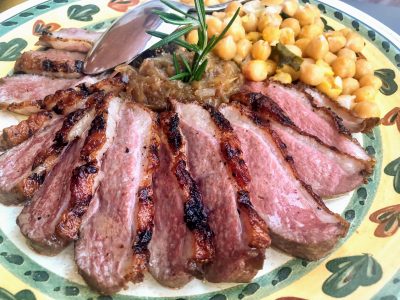 I highly recommend finding a way to position at least one of your family members in NYC. Sure, you could still catch up with them if they lived in Toledo. But you wouldn’t be able to do it at charming little neighborhood restaurants like the one Emma found in Brooklyn, where brassy Italian waiters give you a hard time and the spritzes comes in multiple flavors like rhubarb (the ginger spritz was a revelation). As for the food, the pastas were all first-rate and Ted Allen sang the praises of this terrific grilled duck breast on an episode of The Best Thing I Ever Ate.

That’s it for now. I’m starting to feel bad about dissing Cape Cod food because we had a wonderful vacation and I don’t want to paint with too broad a brush. My guess is Provincetown has better options. And I did have some very good sushi at a Japanese place called Inaho in Yarmouth Port. I just hope they survive. There’s a rumor that Dunkin’ may be expanding the rolls they offer, and in addition to cinnamon and pecan, they’ll have California, rainbow, and caterpillar.