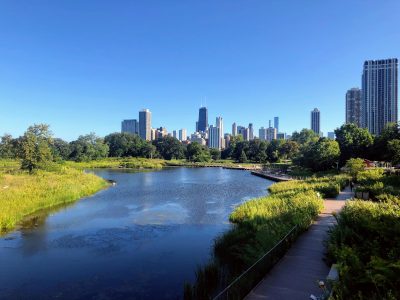 If you want to see a foodie’s head explode, tell them they have one day to spend in a great food town they rarely visit.

I should know. My daughter Maya and I were plotting the last leg of our road trip from Denver to DC when she asked if we could stop for a day in Chicago to get a sense of the place as she looked for post-college employment. Most parents would find that a thoughtful and responsible suggestion. And outwardly I did a good impression of most parents. I dad-nodded and told Maya that her idea made a lot of sense. But inwardly my mind was careening out of control:

One day in Chicago? Not physically possible. Right off the bat there are the classics — hot dogs, Italian Beef, pizza, tacos, ribs, gyros — what am I forgetting? Then there are all new places I’ve never been. Oh lord, and what about Alinea? Can I go to Chicago and not eat there? It’s like going to Yountville and not eating at the French Laundry — which makes no sense unless you’re Gavin Newsom. (Surreptitiously doing a search on my phone.) Whew. Alinea‘s booked. I don’t even have to think about an indoor 3 1/2 hour dinner during Covid or look at the price (I couldn’t resist: $545 per person with wine pairings). Ok, no Alinea but definitely classic Chicago for lunch and then something more contemporary for dinner. Wait — hold on a second! What if we skip breakfast and do two lunches instead? I mean, what else do we have to do? Oh yeah, the neighborhoods thing for Maya. I suppose we can look at them as we drive to the restaurants…

Dad of the year? That’s for others to say. I’m just happy knowing I could do this for Maya.

Mike Tyson said everyone has a plan until they get punched in the mouth. That pretty much sums up the feeling when I showed up for an early char-dog lunch at the Wiener’s Circle and found the place shut down for a massive remodel. I looked down at my phone and Google assured me they were open and I momentarily didn’t know whether to believe my own eyes or an Internet server in Fresno. Luckily, Maya and I had stopped at Superdawg near O’Hare on the drive out to Denver so I could audible and not limit myself to another hot dog spot. 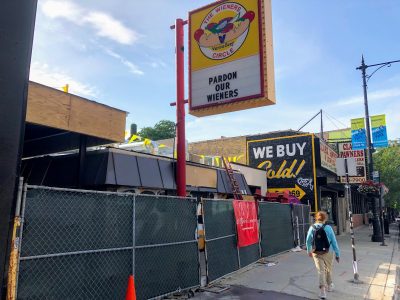 Plan B for lunch #1 turned out to be Mexican. I know there are newer and more authentic Mexican places in Chicago but I didn’t have time for research and Frontera has sentimental value. I lived in Chicago in the late 80’s when Rick Bayless — astoundingly the brother of loudmouth sports yapper Skip Bayless — opened Frontera and helped change the way Mexican cooking was perceived in this country. To a Minnesota boy raised on the Tex-Mex triumvirate of Chi Chi’s, El Torito, and Taco Bell, Frontera was a revelation (and its fancier sibling Topolobampo even more so). So it was nice to see Frontera still going strong and that the expansion of Frontera into commercial products like chips and salsas didn’t diminish the quality of the mother-ship. 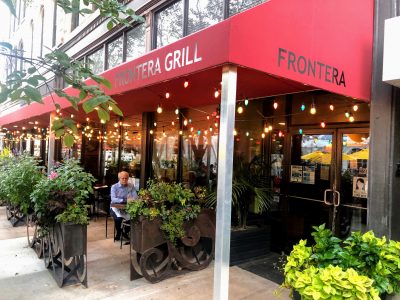 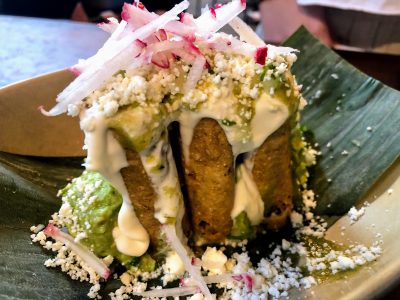 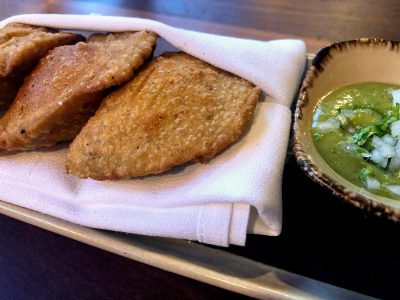 The taquitos were solid but I’d sooner go back for the Mexico City-style quesadillas. Sorry I didn’t get a cheese-pull shot but these were more oozy than stretchy and my cheese-stretch shots never turn out anyway. I looked on the Internet for some tips and found out that food stylists often cut in mozzarella to enhance the stretch. Even if I could get around the ethical issues, I could never get around my general laziness and my obsession with eating the food as soon as it arrives at the table. There’s a Curb Your Enthusiasm episode where Larry David doesn’t understand why he has to wait to eat just because his dining companion’s order was delayed in the kitchen and I never felt more seen.

When most people think of Chicago pizza, they think of deep-dish. But there’s another Chicago pizza style with even deeper roots that’s way more delicious. It’s called “tavern style” and it sports a thin, crisp crust and a layer of cheese and toppings (often including sausage) that blanket the pie almost to the edge. Crucially, tavern-style pizza is cut in squares, not triangles. That means some interior pieces have no crust at all and the highly-prized little nubs in the “corners” of the round pie are almost all crust.

What makes tavern-style pizza so good is the perfect ratio between crust, sauce, cheese, and toppings, and, critically, the consistency of that ratio in every bite. You won’t have toppings in one bite and none for the next three or little mozzarella islands leaving you with cheese in some bites and others with just sauce and crust. Plus, tavern-style pieces are small and thin enough that you can easily eat ten or twelve pieces without feeling stuffed. Try that the next time you’re at Giordano’s.

By the way, for anyone wondering whether you can get Chicago tavern-style pizza in the DC area, you can’t. I’ve looked. So while you can’t shake a stick these days without running into a grand opening of another Detroit-style pizzeria, tavern-style is the pizza gold mine still yet to be discovered. 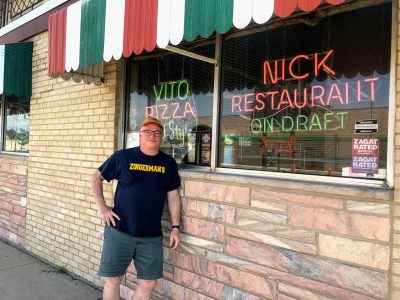 Vic Baracco and his wife Mary opened their first tavern in Chicago in 1923. But it wasn’t until after World War II when his son Nick joined the business that they started serving tavern-style pizza as a complement to the beer. They’ve been at this location at 84th and Pulaski since 1946. So Vito & Nick’s is old school. How old school? In 1965, Nick laid down the law on delivery, saying “We will never deliver, if they want a truly great pizza, they will come in for it.” To this day, Vito & Nick’s doesn’t deliver. 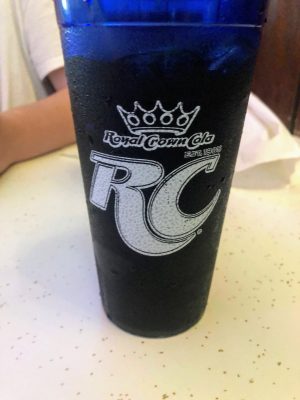 How old school? They only serve RC Cola. Order a Coke and the waitress will ask you if RC is ok. I was stumped. I had no idea. What the heck, I thought, you only live once. And so I tried it and learned a valuable lesson: beverages taste better from a glass embossed with your initials and a crown. 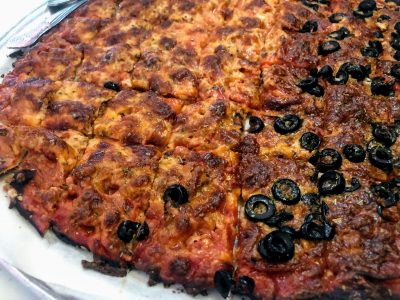 A large half sausage-half pepperoni and black olive pie. The right side may look over-done but the pepperoni and olives are dark and I like my pizza on the more well-done side anyway. For me it was perfect. 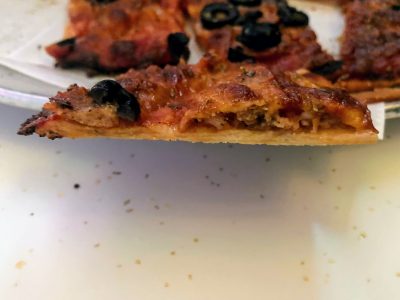 It’s all about the thin, crispy crust and the balance between crust and toppings. Also note the gold-glitter Formica® that was discontinued in 1973.

Time for a mid-afternoon snack. Mostly because I couldn’t imagine going to Chicago and not stopping by Garrett’s for the world’s best caramel corn. The first Garrett’s shop opened in 1949 and now they’re sprinkled throughout the city, including three at O’Hare. If you ask me what’s special about Chicago, I’d say it’s a city that supports both a hot dog culture and a caramel corn culture like no other city in the world. 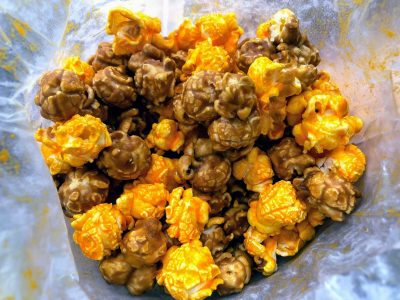 I know. This isn’t simply caramel corn. This is a “Chicago Mix” of caramel corn and cheese corn that became a menu item at Garrett’s in the mid-’70s when customers started asking for extra bags to mix the two flavors together. My fantasy is that it came about as the result of a happy accident like the old Reese’s Peanut Butter Cups commercials where someone eating chocolate crashed into someone eating peanut butter and they both were amazed at the result (here’s an example of those great Reese’s commercials; it was simpler time). Like peanut butter cups, it’s the salty-sweet combination that makes the mix work, with the salty cheese corn cutting the buttery sweetness of the caramel corn. It’s two great tastes that taste great together.

Stephanie Izard was the first female chef to win the Top Chef title, in the show’s fourth season. After Top Chef, Izard opened Girl & The Goat and two other restaurants in Chicago and this year opened a branch of G&TG in LA. Izard cooks with gutsy, global flavors in combinations I find completely irresistible. Everything on her menu sounds like something I want to eat and the pain of missing out on so many dishes during my one meal there almost outweighed the joy of eating the handful I could. Almost. 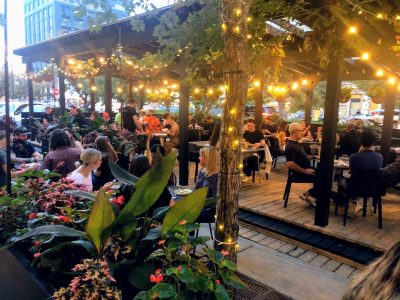 Lovely outdoor seating area for G&TG in the West Loop, an area that’s become a magnet over the past couple of decades for some of the city’s best restaurants. 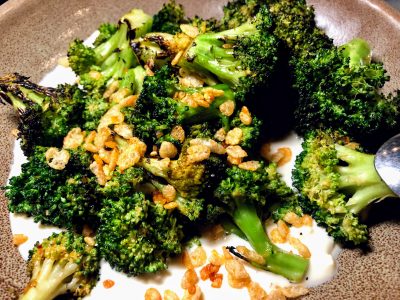 This photo doesn’t do the dish justice — see my rule above against fussing too much over pics — but this was the best broccoli I’ve ever had. Usually to get this kind of smokiness means the florets will be scorched and overcooked. Not here. The smoke had permeated beautifully and yet the broccoli was still crisp-tender and complemented perfectly by the mild smoked blue cheese and the textural contrast of the krispies. I sat there marveling at the technique and wondering how they pulled it off as I shoveled every last piece into my mouth. 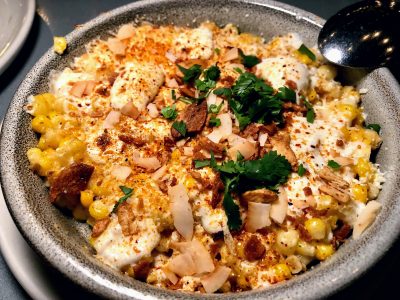 Elote is a wonderful Mexican corn dish that’s been popping up everywhere. This Thai twist plays with some of the common flavors in both cuisines like chiles, lime, cilantro, and caramel to say something new about the possibilities of world peace and how delicious it can be. 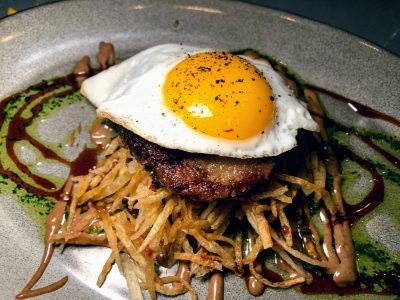 Regular readers know that I’m not a huge breakfast fan. But this dish showed me the untapped potential of a plate of eggs, pork, and potatoes. The perfectly-cooked egg and potato stix frame the unctuous star of the dish — a crisp patty of wood-roasted pig face. I assume the term “pig face” is something of a misnomer and most of the meat comes from the pig’s cheek/jowl, but I wouldn’t be surprised if Izard throws in other bits from under the snout and jaw for good measure. In any event, pig face sounds so much more badass than pork cheek. 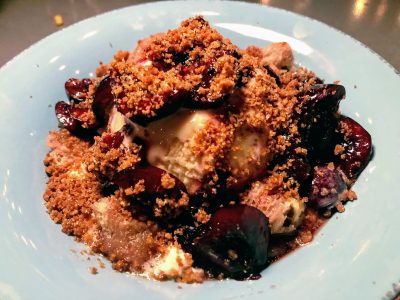 Not surprisingly, Izard doesn’t venture into the freeze-dried moonscape desserts that a lot of chefs seem attracted to these days. Her desserts are accessible but interesting with enough of a homey vibe to send you off with a warm, comforted feeling. This particular dessert tasted like a sour-cherry sundae and a sour-cherry pie had a baby and it got the best of both of their features.

Overall, I felt pretty good about our day of eating in Chicago. We took our swings and had far more hits than misses. Oh, by the way and in case you’re wondering, Maya decided to move to Denver. For some reason Chicago made her feel a bit sluggish.