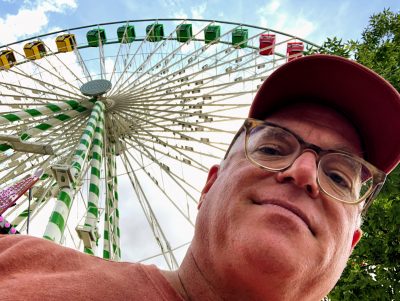 I know there are four months to go, but I’m calling it. This will be my best week of eating in 2021. How do I know? Because this was the week my daughter Maya and I drove from Denver to DC with stops in Minnesota (where I was born and raised) and Chicago (where I spent much of my twenties). I acknowledge up front that food memories play an important role in this report. But I also think these foods are objectively great, many of them American classics. If Proust had visited the Minnesota State Fair as a child he wouldn’t have given madeleines a second thought and we’d all be reading his remembrances of things corn dog.

Anyone who knows me knows that the Minnesota State Fair is my happy place. Probably because I won’t shut up about it. But don’t take my word for it. The Minnesota State Far was recently ranked the #1 fair in the country  Texas came in at #2, Wisconsin is #7, and Iowa is sucking wind down at #8 (proving once again that the best thing to come out of Iowa is I-35). 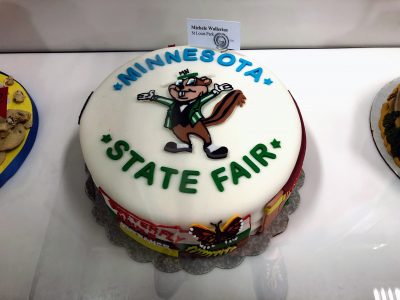 Unfortunately Michelle Wallerius didn’t take home a ribbon in this year’s cake competition. Minnesotans may be as competitive as anyone but you can’t be obvious about it and my guess is the judges found Michelle’s pandering a bit too on-the-nose. 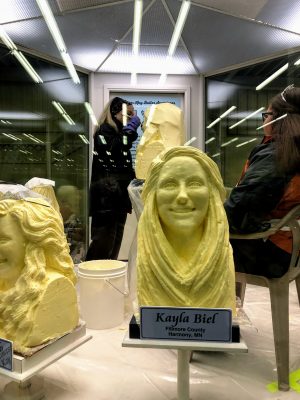 I never miss the butter sculptures of Princess Kay of the Milky Way and her court in the Dairy Building. The butter artist working in the back of the refrigerated booth retired this year after fifty years of sculpting. CBS Sunday Morning did a sweet feature on her last weekend, which you can watch here and remind yourself that there’s at least one thing in the world not going to shit.

Now on to the food you can actually eat…

Top Must-Eats at the Fair 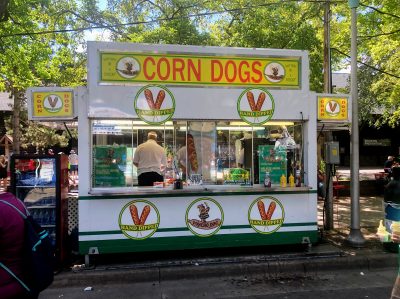 Corn dogs are the most important fair food and this booth — on Carnes Avenue next to the Department of Natural Resources pavilion — is the best there is. Accept no substitutes. The batter is richer and cornier than the other booths which tend to cut their batter with more white flour. In particular, don’t bother with the Pronto Pup stand across the street. Pronto Pups are the Hunt’s ketchup to the Corn Dog’s Heinz. There’s nothing wrong with Hunt’s if that’s all that’s available, but if you have a choice it’s Heinz every time. Here, Heinz is literally steps away.

My other piece of advice is to make a beeline for the corn dog booth when you arrive. That way you can get one under your belt — insert joke here — and be ready for another before you leave. If you’re under thirty and your metabolism is still revving high, ignore this advice and double back on the hour. 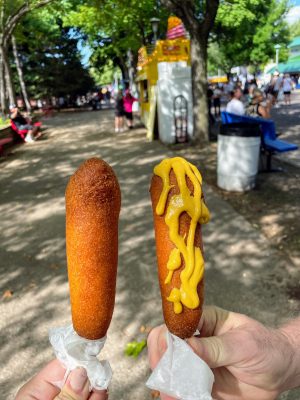 The corn dog is the perfect American street food. Unlike a hot dog or a hamburger, it’s designed to be eaten one-handed, which leaves your other hand free to hold a drink or a second corn dog. 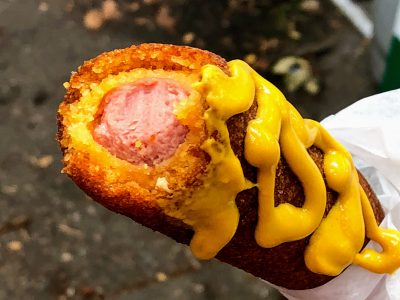 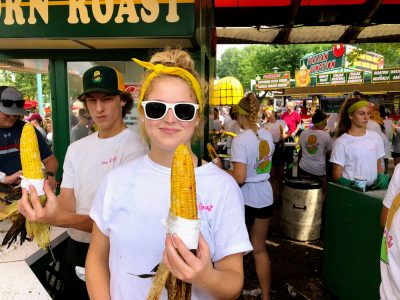 The second most important food item at the Fair is the Corn Roast, helpfully located a few hundred feet from the corn dog booth near the Grandstand. It’s a simple pleasure: Minnesota sweet corn roasted until smoky and brushed with butter (add your own S&P). Most years, they go through about 25,000 ears per day and the crowds are five-deep waiting to be served. This year Covid has cut the numbers considerably. Walking right up to the counter for an ear of corn felt like walking into the DMV and being told I don’t need to take a number and here’s your renewed license. 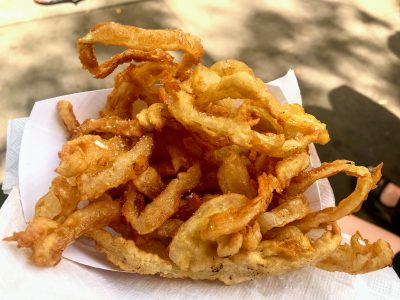 Thin-and-crispy onion Rings from Danielson’s & Daughter’s just outside the Food Building. Even during Covid, there was a line for these made-to-order beauts. 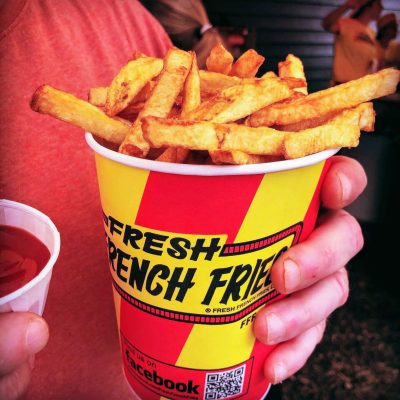 One last fried must-eat are these french fries near the midway. I’m usually partial to shoestrings but these have a crispness that meatier fries typically don’t achieve. Free packaging advice: a french-fry container with a built-in ketchup cup on the side. Otherwise, as you can see, you don’t have a free hand for eating. I ended up trying to balance the ketchup cup on top of the fries and lurching around the fairgrounds like I was running a one-person egg-and-spoon race. 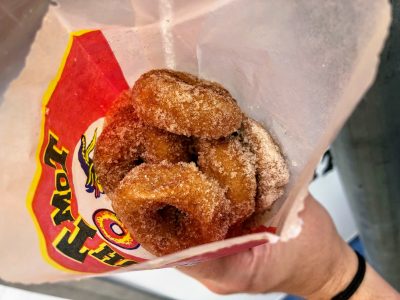 I lied. THIS is the last fried must-eat: Tom Thumb donuts next to Ye Old Mill. Ye Old Mill is the oldest ride at the Fair (circa 1915) but I can’t recommend it — unless you’re someone who loves the floating-barge concept of Disney’s “It’s A Small World” ride but finds it’s just too much of a fast-paced adrenaline rush. 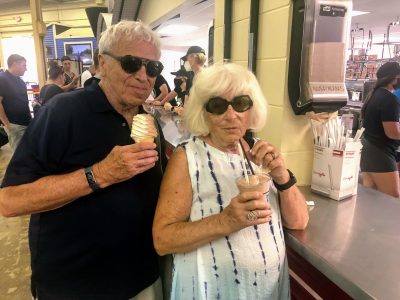 Before you check out the butter sculptures in the Dairy Building, grab a soft-serve cone or shake from the Dairy Goodness Bar. This is also a good last stop because the Dairy Building is near some of the main parking areas. If the timing works, you can feel the tremendous satisfaction of finishing your last bite of Fair food as you turn the ignition for the ride home. 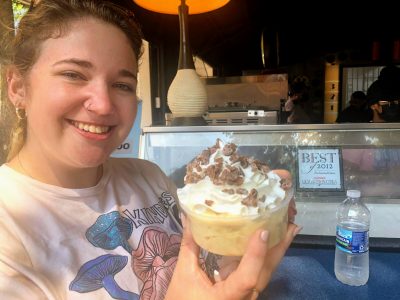 Every year dozens of new Fair Foods are introduced. Most of them are gimmicky things like steak-dinner-on-a-stick or stuffed-grape-leaves-on-a-stick — both real things — that mostly seem designed to attract publicity and give the local media something to preview. They’re not all bad. The problem is that most are and you don’t know which are which. My advice is to wait a while to see what has staying power. Some will prove themselves, like the Tomato + Sweet Corn BLT in the Minnesota Farmers Union booth. Maybe take a flyer on one or two new things. This year, we tried the Caramelized Banana Pudding from the Blue Moon Dine-In Theater. It was a solid B, worth a respectable three bites. If it comes back next year, it’ll be better. If it’s still around five years from now, it’ll be great.

Hot Takes on Popular Fair Foods That Aren’t My Thing 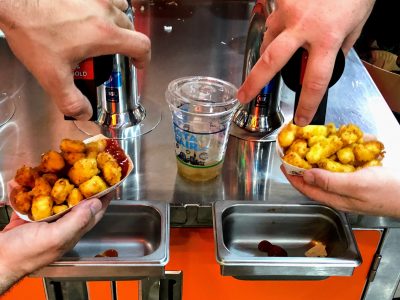 I don’t love fried cheese curds. I’m more of a whey guy. The first few are good when the curds are oozy but they grow less appealing as they cool and not worth the amount of stomach space they occupy. Still, I’m not here to yuck anyone’s yum and if you want cheese curds, get them in the Food Building at The Mouth Trap. 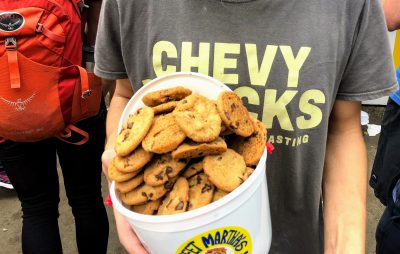 Speaking of a questionable use of stomach space, I give you Sweet Martha’s chocolate chip cookies. You’ll see scores of Fair-goers lugging around these overflowing cookie buckets. The cookies themselves are fine — it’s hard for warm chocolate chip cookies to be bad — but you can do just as well at home and putting any kind of dent in a bucket of cookies will put you out of commission for the rest of the day. If you must, buy a bucket as you head for the exits or go for one of the smaller paper cones which “only” holds maybe a dozen cookies.

I realize this post ran kind of long. Get me started on the State Fair and I get as chatty as Jay Leno talking about his old cars. So let’s cut it here and make this Part One. Next week, Part Two will focus on Chicago and the rest of the Best Eating Week of 2021.

And now I need some rest. It was a great trip but there’s nothing like coming home and sleeping in your own bed. 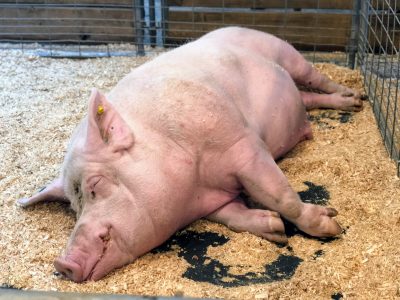