A halibut almost broke up my marriage. Not intentionally, I suppose. He was dusted in porcini at the time and presumably unaware of the havoc he was creating around him. Still, the indisputable fact is that if he had never been born – indeed, if the whole halibut phylum had never evolved – my wife and I wouldn’t have been in the middle of this terrible row. So when you come right down to it, just how innocent was he?

It was the spring of 1997. My wife Sonia and I were planning a weekend trip to New York City to celebrate our tenth anniversary. No kids, no Palm Pilots, nothing to stand in the way of a romantic getaway in the Big Apple. Sonia booked us a room at the Palace, where Leona Helmsley held court as the Donald Trump of her day.

I was in charge of restaurants. I was and am a card-carrying foodie (although we prefer the term “big boned”). I never go to a restaurant without doing my homework – poring over menus, reading reviews, and cross-referencing various blogs and websites that cater to people with my particular affliction.

But this was 1997. The Internet really was a series of tubes back then, and there really was a butler named Jeeves fielding questions and sending back answers in vacuum-tube canisters. It took me hours to gather even the most basic information about the New York dining scene, which meant, in addition to my online research, I had to traipse from bookstore to bookstore to refine my findings with Zagat and even – I’m not too proud to admit – Fodor’s.

The big celebratory dinner came down to a difficult choice between Aureole, Chanterelle and a new upstart called Jean-Georges. After much to-ing and fro-ing, I finally decided on Aureole – Charlie Palmer’s flagship – which at the time occupied a romantic townhouse on the Upper East Side.

It was a soft spring evening when Sonia and I arrived. I’d never walked into such a perfect setting in my life. The room positively glowed, both from the votives on the tables and from the sophisticated patrons who all seemed to be saying the most witty and merry things. I felt like Ma and Pa Kettle stumbling into the opening montage from Manhattan.

We were given menus, but I barely opened mine. My research had turned up two can’t-miss dishes – the duck breast with vanilla-kumquat gastrique and the butter-poached lobster with baby leeks. I’d explained to Sonia on the train that we’d be having one of each. Done and done.

I was so nailing this.

“As you look over the menu, I just wanted to let you know about our specials this evening.”

I thought about telling him not to bother but decided to let him go. Didn’t want to be rude and probably would take longer to explain why I’m interrupting.

“We have a grilled veal chop tonight that is really wonderful.”

Outwardly patient, inwardly foot-tapping. Come on, come on, I didn’t come all the way to New York to order a hunk of meat I could grill at home.

“And then we also have a very nice porcini-dusted halibut that comes on a bed of Swiss chard.”

I started to say thanks, we’ll just have the duck and the lobster, when my wife closed her menu and said the seven words I’ll never forget: “The halibut sounds good. I’ll have that.”

The blood rushing to my brain left me incapable of forming words. Are we ordering three entrees? Because we’re still getting the duck and the lobster, right? Right? I mean, after the hours I put in, there’s no way she’d order the halibut because it “sounds good.” Right?

I don’t need to dwell on the ensuing ugliness. She accused me of caring more about a stupid piece of fish than I cared about her. I accused her of caring more about a stupid of piece of fish than she cared about me. I said maybe I’ll just get the veal chop then – as if that would make clear that her insane behavior could lead to the complete breakdown of the social order. But she called my bluff – fine, get the veal chop, what did she care? I beat a grudging retreat and got the duck, but the damage had been done. The dinner was ruined.

We’ve probably told the halibut story to dozens of people in the past twenty years. I’d say eighty percent side firmly with Sonia. If she wants the halibut, let her get the halibut. What’s your problem, man? The other twenty percent, while recognizing my issues, think my wife could have been more sensitive to how important this was to me and the work I put in. Maybe one or two backed me completely (thanks, mom).

I’m happy to say I’m a lot more relaxed these days. Sometimes the first time I actually see a restaurant’s menu is when I sit down to eat. (Ok, not really; I wasn’t raised in a barn, after all.)

But I have learned not to put so much pressure on every meal. To prove it, I’m ready to finally come clean about something I’ve never told my wife or anyone else about that dinner in New York – until now. Her halibut was the best thing we ate that night.

5 Responses to The Halibut That Almost Broke Up My Marriage 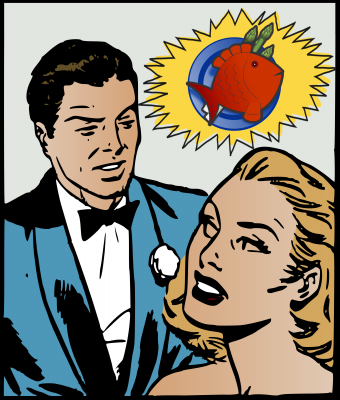