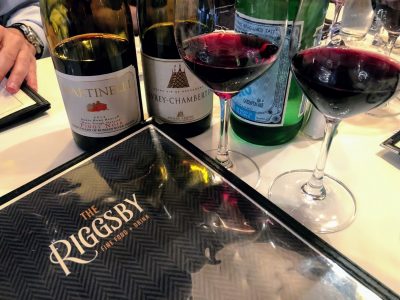 The Riggsby has been around for several years now, tucked away in the boutique Carlyle Hotel a few blocks off Dupont Circle. But don’t be fooled by the demure trappings. It’s a hotbed for some radical ideas.

Let’s start with the menu, which is divided into something called “first courses” and something else called “entrees.” Really, Riggsby? You can’t just say small bites, small plates, not-quite-medium plates, sorta-big plates and plate-sized plates like everyone else? And where’s the “for the table” section if I feel like spending $150 for a steak with no sides? Inauspicious start.

I’m hoping for better things when our server stops by to deliver The Speech. You know, the one about how the restaurant encourages sharing and recommends that we order 16-17 plates per person, followed by a warning that they’ll come out of the kitchen when they’re good and ready because there’s no predicting things like that (server subtext: Do I look like the Amazing Kreskin?). But get this — no speech! Like the menu is somehow self-explanatory! So I Google “first courses” and “entrees” and discover that this style of eating was once apparently quite popular. There isn’t a lot of hard evidence, but historians believe that each diner would select one dish for themselves from each menu category. Sharing was permitted but not expected. Appalling, I know. I remind myself to judge such things by the morality of the times and not by today’s enlightened standards.

Things only got weirder after that. The food doesn’t come out randomly. The dishes for each course somehow all emerge from the kitchen at the same time, like some kind of pointless parlor trick. I long for the spontaneity of watching my wife eat her salad before my soup shows up or guessing whether the shishito peppers will come out as an appetizer or a pre-dessert palate cleanser.

There’s more. Each entree at The Riggsby comes with its own protein, starch and vegetable on the same plate. This may be hard to wrap your head around but you don’t share sides with the table. You each get mini-sides on your own plate, which may be completely different from others at the table depending on the whims of some trained chef. The upshot — and I know this may seem crazy — is that you literally could go an entire meal and never have roasted cauliflower with za’atar, fried Brussels sprouts tossed in a vaguely Asian sauce, under-seasoned grilled asparagus, crispy fingerling potatoes that aren’t, or Our Famous Lobster Mac & Cheese.

And don’t get me started on the atmosphere. The tables are spaced so far apart that I never did find out whether the woman at the next table ever understood why her mother can’t just enjoy the grandkids. And the background music is disturbingly unobtrusive. If I can’t hear Arcade Fire or The Strokes cranked to chain-saw levels, I wonder if I’m even eating out.

And…scene. Thanks for your indulgence. I feel much better. But as anyone who knows me can tell you, this alter ego isn’t really me. Or at least not most of me. I love restaurants that involve sharing — family-style even more than small plates — and I’ll suffer any chaos or personal discomfort to eat well. But part of me has a soft spot for what The Riggsby represents. Order. Comfort. Respect for individual boundaries and needs.

I only wish the food more consistently lived up to the rest of the experience. 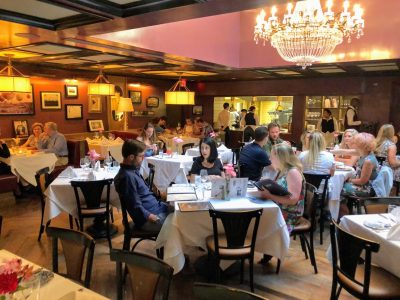 The Riggsby’s interior evokes a 50’s supper club crossed with a 20’s speakeasy. Plus a chandelier. 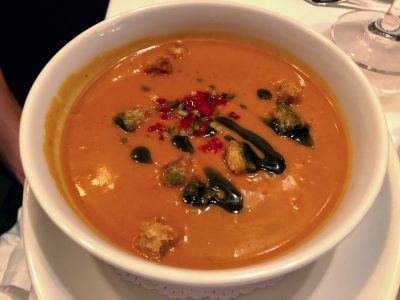 This refreshing gazpacho was a special but hopefully will stick around during the sticky summer months. 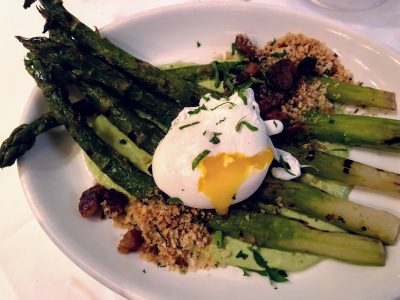 Grilled asparagus with a poached egg may be bordering on tired but it still works when the components are right. Juicy stalks, meaty chunks of bacon, perfectly poached egg, and crisp breadcrumbs add up to a winning dish. 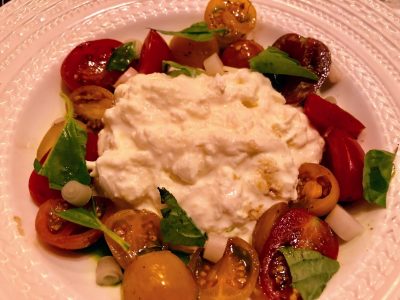 Basically the center part of burrata that everyone fights over, here paired with standard-issue tomatoes, basil, and basil oil. Doesn’t come with toast but really should, so be sure to ask for some when you order. 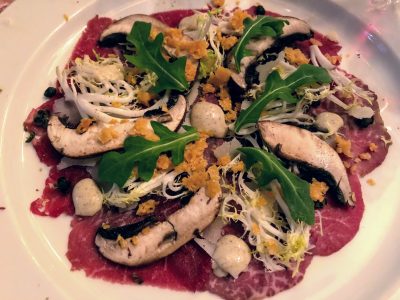 The Riggsby Beef Carpaccio with truffle, parmesan and mushrooms

One of my pet peeves is restaurants that name a dish after itself that doesn’t deliver anything new or noteworthy. Another pet peeve is any dish with raw, thick-cut mushrooms. Mathematically, this dish can be expressed as pet peeve². 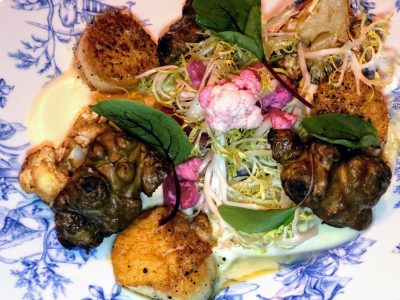 Not bad, but much better scallops to be had in DC. On the other hand, bonus points for the appearance of under-utilized sunchokes. 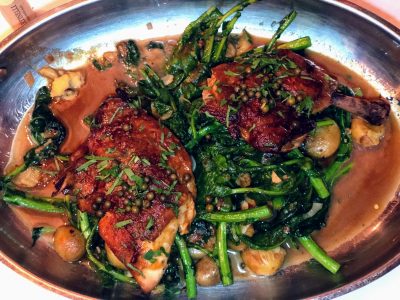 A decent roast chicken that does just enough to warrant the self-branding. The white meat is slightly dry and needs help from the nicely piquant sauce. 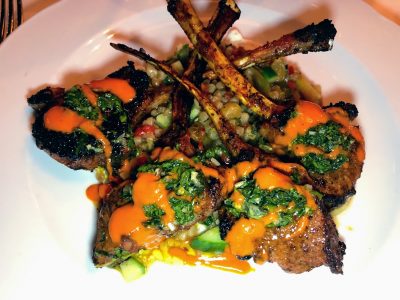 Like the chicken, the lamb chops are fine but lack juiciness and savor — particularly disappointing at $48. Still, a forkful combination of lamb, sauce, and the delicious Israeli couscous with veggies goes down pretty easily. 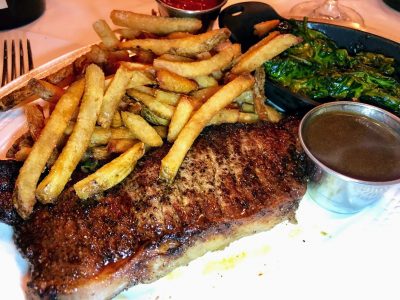 No complaints here, other than I’m not a huge NY strip fan and would greatly prefer a ribeye if I’m spending $48 for a steak or a hanger steak at a lower price point. But consider that personal taste. The steak itself was cooked to a perfect medium-rare, the fries were hot and crisp, and the creamed spinach tasted more of spinach than cream. So mission accomplished. 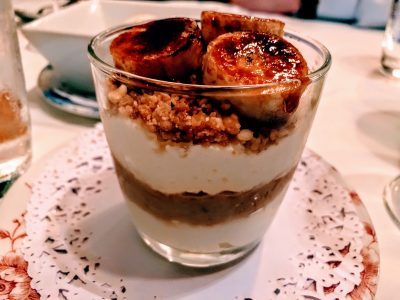 A good dessert for banana lovers, akin to something like a banana tiramisu. My tablemate said to him it tasted like banana baby food, which, unbeknownst to him, didn’t turn me off because I ate banana baby food well into adulthood. Um, because it’s delicious.

Despite its throwback virtues, I don’t see The Riggsby becoming part of my regular rotation. Instead, it’s be the kind of place I’ll turn to solve a specific problem. Let’s say I’m having dinner with people who are fussy eaters, have dietary restrictions, don’t like to share, are noise sensitive, or, better yet, some combination of the above. A steak house might work, but maybe they want more choices and don’t want to do a chain. So now you’re looking for something that’s reliable, forty-plus friendly, and serves a wide variety of needs. Somewhere that may not produce the highest highs but will avoid the lowest lows and provide a good experience for lots of people. Very few people will be unhappy at The Riggsby. And in today’s world, that’s not nothing.