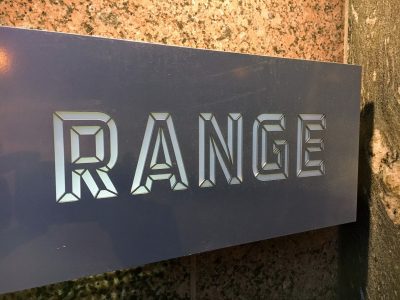 I can’t remember when I’ve left a restaurant feeling as sad as I did last Saturday night leaving Range. It wasn’t about the food or the service, both of which were fine to quite good. It was something much bigger and at the same time more specific. It was, to borrow a phrase, about the audacity of hope and the sometimes painful gulf between promise and reality.

But while I left Range sad, I didn’t leave hopeless. I’m a sucker for happy endings; every time I see Romeo and Juliet I think this time those crazy kids just might make it. As long as there’s a protagonist that I care about and believe in — and here there definitely is — I’m clinging to the belief that the ending will be more Hollywood than Shakespearean.

But I’m getting ahead of myself.

It’s Saturday at 7:30 pm. The city’s top-tier restaurants have been booked solid for weeks. Even the less popular restaurants are buzzing with trickle-down customers looking to be fed. But Range has plenty of tables available. I know because I made a reservation that day on Open Table and could have picked any time slot I wanted.

Range’s hostess stand sits just outside the restaurant in the atrium of the Chevy Chase Pavilion. Walking up, I see several people milling about but I know from experience that they’re not waiting for tables at Range. They’re holding buzzers from the Cheesecake Factory next door and are hanging out in the hallway to get away from the crowds inside. 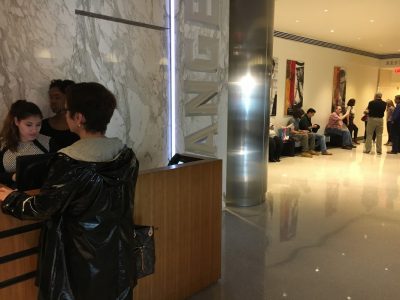 It wasn’t supposed to be this way.

When Range opened in December 2012, it was like the second coming of the Beatles if the Beatles became famous on Top Chef before moving back home to Frederick to open Volt and Family Meal. Otherwise, they’re nothing alike. But still: Bryan Voltaggio was opening a restaurant in DC! It can’t be overstated. This was a huge, huge deal.

And what a magical place it would be! The media breathlessly hyped every new detail. 14,000 square feet! 300 seats! 50-plus employees! Two master sommeliers! Not to mention nine — count ’em nine! — separate food stations, including a bakery, a salumeria, a raw bar, a pasta kitchen, a wood grill, a confectionary, and a pizza kitchen helmed by one of DC’s best-known pizzaiolos, Edan MacQuaid. Range described not only the variety of the food that was in the offing but the vision of what a restaurant could be.

And for a while it all worked. Range quickly became one of toughest reservations in town, the place any self-respecting foodie had to have an opinion about. The seats were filled, the prep stations were humming, and the accolades were flying.

In March 2013, Tom Sietsema declared in his Post review that “the hype is justified.” Range’s bread basket, Tom said, may be the “best in the city.” The kale Caesar was “one of the best Caesar salads I’ve encountered in ages.” And my personal favorite, apparently running out of verbs from the past half-century, Tom reported that “I’ve never met a pasta I didn’t dig here.”

Walking in, it’s hard to believe those glory days were four short years ago. Many tables are unoccupied and not a soul is sitting at the counters designed to give customers a front-seat view of the various cooking stations. Not that there’s a lot to see. Several stations are partially dark and others are lightly staffed. I feel like an old-timer walking my grandkids through the shuttered grounds of Glen Echo Amusement Park. You have to use your imagination, but in my day people used to line up just to eat at the counters! And this whole kitchen area was bustling with cooks turning out the most amazing and delicious food you ever saw! Then I take a wistful pause as my companions wait for my Rosebud moment to pass. 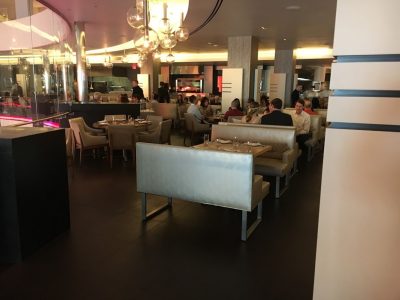 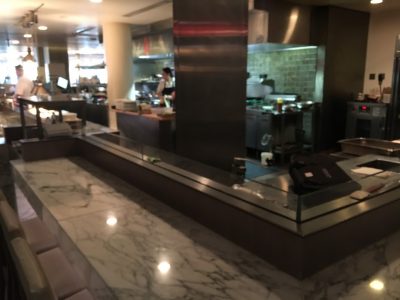 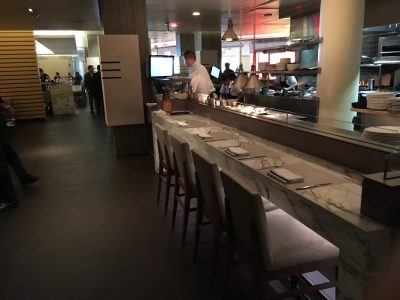 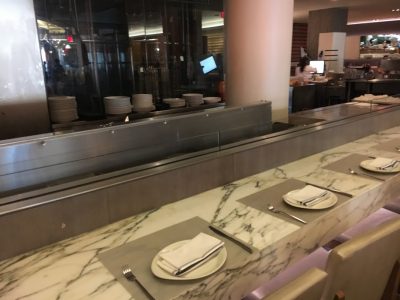 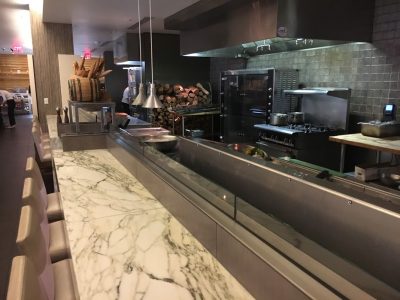 Some of the stations, like the raw bar, the confectionary and the wine rack seem depleted: 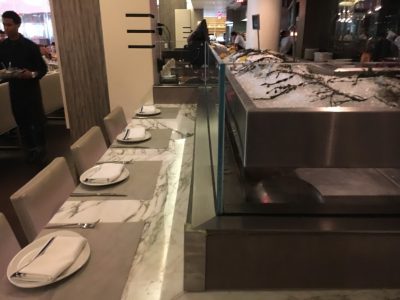 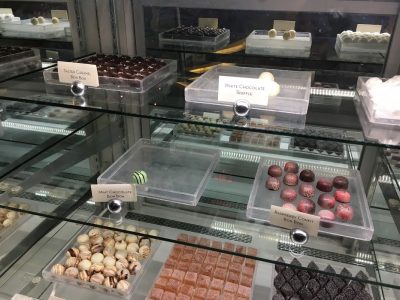 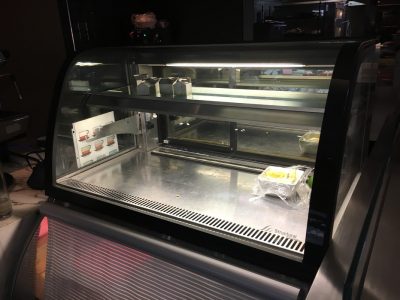 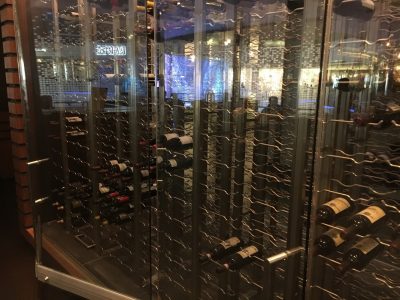 And then of course there’s the mall location. If you’re not facing the food stations in Range’s half-circle layout, you probably have this view of Chevy Chase Pavilion: 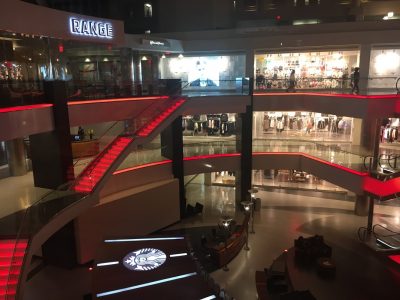 This is the very definition of a Hobson’s choice. Would you rather face the understaffed kitchens or the barren mall? What was once easy to ignore when the restaurant was packed with customers now feels much heavier, like an outward reflection of the restaurant’s internal ennui.

Things get a little less bleak when the food arrives. The drop-off in quality of the cooking hasn’t been as dramatic as the drop-off in the surroundings. The creative pastas Tom dug so much are gone, a single dish of gnudi with meat sauce surviving on the current menu. But some of the other signatures are still there, albeit somewhat faded from the early go-go days. 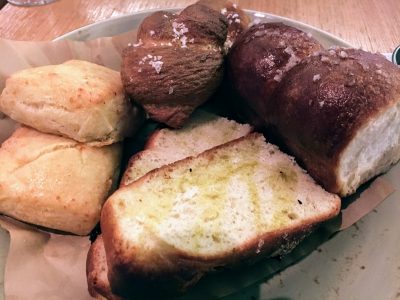 The cornbread with bacon marmalade is no longer part of the bread basket but the biscuits, pretzel rolls, focaccia and Parker House rolls make for a respectable start. 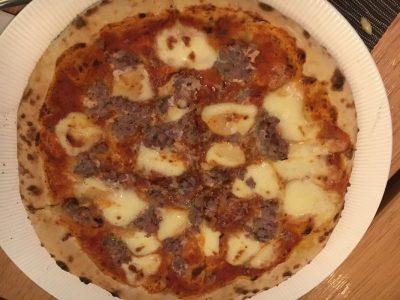 The pizza quality at Range has slipped noticeably. The crust is middling at best. This is the sausage pizza with smoked mozzarella and leeks, although the leeks were MIA. 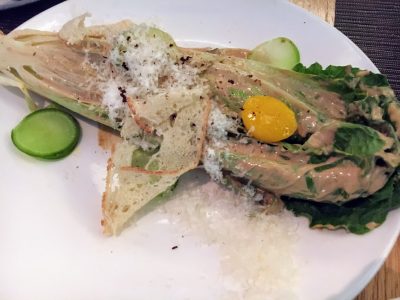 The kale Caesar is gone, at least for now. In its place is this straight-romaine version, heavy on the dressing. It also triggers one of my pet peeves: the make-your-own Caesar salad. If I wanted to toss my own salad, I would have stayed home and used a proper bowl. Same goes for making me break up whole slices of toasted bread to make my own croutons. 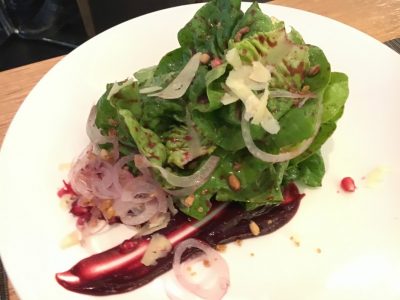 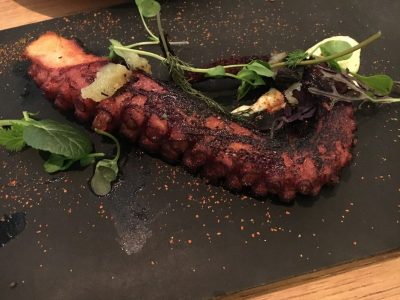 An above-average version of the now-ubiquitous appetizer with tender, nicely charred flesh. 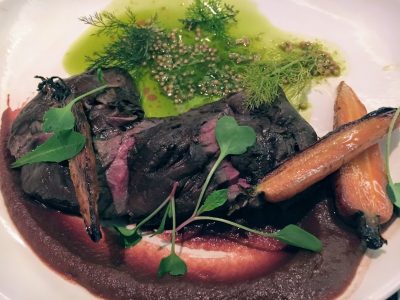 Steak and carrots are well-cooked. Pickled mustard seeds are a welcome dipping sauce, unlike the dreary puree. 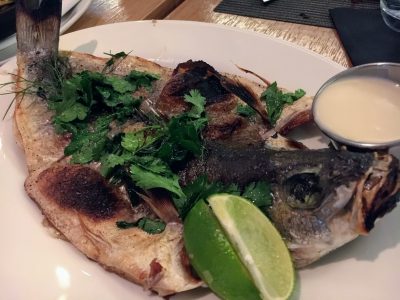 Best dish of the night. Fish is de-boned, butterflied and perfectly cooked. A happy marriage of good product and good technique. 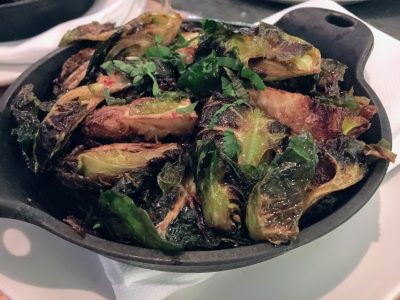 Still a good rendition, although the sprouts seemed crisper in the early days. Unless it just seems that way. 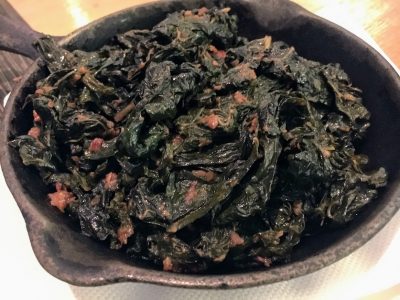 So dull it should sponsor the Charlie Rose Show. 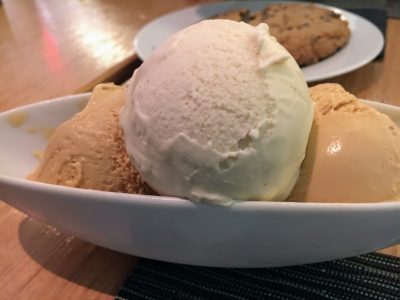 Skip the fancy plated desserts and stick with something homey.

Which brings me back to the Hollywood ending I’m still rooting for.

If I were directing this movie, I’d take Voltaggio aside at this pivotal point in the script:

Bryan, this is your George-Bailey-on-the-bridge moment. You had a big, bold and audacious vision. Things went smoothly at first but now you’re facing tremendous adversity. It’s time for you to reassess, rip out the physical reminders of what could have been, and start anew. No, I don’t know what that is. Maybe it’s a new barbeque joint or maybe it’s a flagship for Family Meal. You’re the hero of the piece. You figure it out.

Voltaggio would simply nod and then the film would cut to the final scene that starts out with a close-up on his seemingly impassive face. The audience at that point would have no idea what was going on. Then Voltaggio would break into a big grin and the camera would pull back to reveal a totally revamped restaurant that was more packed than ever.

See, I told you I was a sucker. But stranger things have happened and, if it does, look for me in a cameo role at one of the tables cheering louder than anyone.

4 Responses to The Saddest Restaurant in Washington