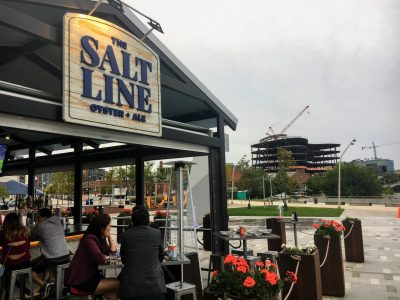 You may remember that I didn’t exactly fawn over The Salt Line a few weeks back. I believe I said it was the most disappointing restaurant I’d been to in a long time and that the chicken tasted like something you’d find on a steam table at Golden Corral at the end of a long night. But that was an exaggeration. It could have been the middle of a long night.

Still, I couldn’t help but wonder whether I’d given The Salt Line a fair shot. The Nats were playing across the street the night I was there and by the 6th inning the restaurant was crawling with red-shirted fans fleeing a blowout. Servers and other staff seemed harried and a bit overwhelmed. I still thought it was fair to review the place — they were open for business and charging full freight — but it kept nagging at me that I probably hadn’t seen The Salt Line at its best.

Then last weekend Tom Sietsema gave The Salt Line three stars in the Post. He raved there were “boatloads of reasons” to book a date at the “jaunty new dining destination” that “tastes as good as it looks.” I was stunned. I went back to the top of the review and slowly sounded out the syllables: Theee… Saalllttt… Liiiinnne…. It sure sounded like the same place. Once I confirmed that there weren’t two Salt Lines in the DC area, I knew what I had to do. I had to go back. I had to know for sure.

The first thing I did was check the Nats home schedule. They were in the middle of a long home-stand but Monday was an off day. The stadium would be dark. So I booked a table and explained to my saint-like family why we were going back to a restaurant none of us liked just a few weeks earlier.

Monday turned out to be one of those gorgeous September evenings in DC. We got lucky and scored the last table on the patio overlooking the river, right where Tom ate. Our server was friendly and attentive but not intrusive. If The Salt Line faced challenging conditions on my last visit, this time it had everything going for it.

And it still wasn’t very good. 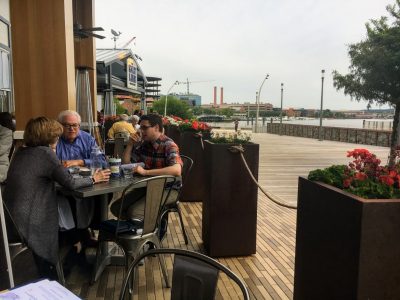 I made sure to order several of the things Tom loved. So we started with the seafood charcuterie, which Tom called “the pride of chef Kyle Bailey.”  Tom led his review with a charming story of how his server sold him on the dish by showing him a photo of it on her smartphone. Here’s my photo. I’m guessing it doesn’t make you eager to spend the $27 — and you haven’t even tasted it. 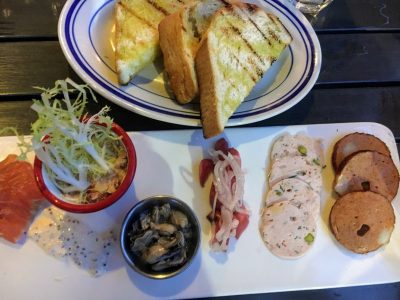 Pickled Beets — Fine but no extra credit for veggies that resemble seafood.

Swordfish Mortadella — Clever ideas don’t always translate to the plate. Just because you can make mortadella with flavor-challenged swordfish doesn’t mean you should.

Shrimp Linguica — The clever idea here is much more successful; the flavor of the shrimp plays nicely against the paprika and other spices. 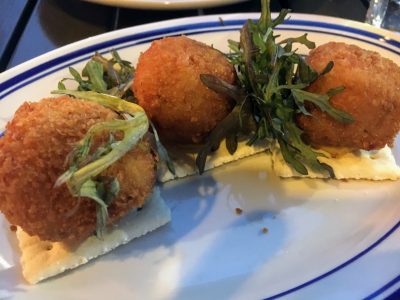 Tom called these salt cod croquettes “bodacious.” If “bodacious” means “decent enough,” I’m on board. The fried salt-cod-and-potato mixture is pleasant but nothing you couldn’t find at any run-of-the-mill tapas bar. 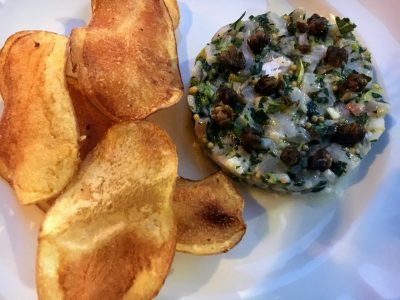 Probably the best dish of the night. Freshly chopped seafood with herbs and zing from pickled mustard seeds and fried capers. In some ways reminds me of the Leeks Dijonnaise at Convivial, another carefully-constructed salad shaped like a hockey puck with surprising little bursts of acidity and crunch. 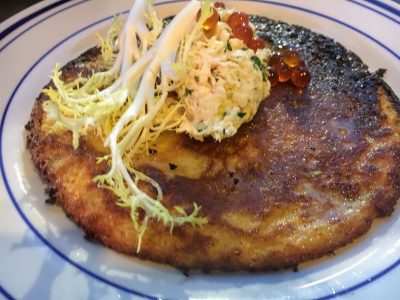 I get the thinking here. Corn cakes with smoked salmon and creme fraiche is a classic combination. Why not pair a more rustic johnny (corn)cake with smoked trout salad? Well first off because the mushy texture of trout salad is all wrong compared to the silkiness of smoked salmon. And second, mayonnaise tends to flatten flavors as opposed to the tang of creme fraiche. The johnny cake is pretty good, though. 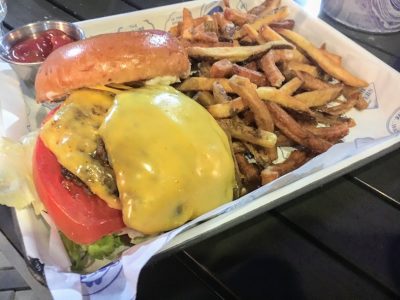 My only repeat order, which on my last visit tasted like it spent too much time under the heat lamp. It’s gotten so much media attention that I had to give it another try. This time the burger was hot. It’s a nicely messy double-decker in one of my favorite styles — the smashed kind you’d find at an old-school roadside burger joint. I’d like a bit more crustiness from the flat top and a little more succulence in the meat but the cheese and pickles were both spot-on. Tom said the burger’s a home run; I’ll give it a stand-up double. There are better burgers in town — Duke’s, Le Diplomate, and Ray’s Hellburger to name a few — but this is very good.

The fries were hot as well but showed a lack of care in frying — half of them lacked crispness. 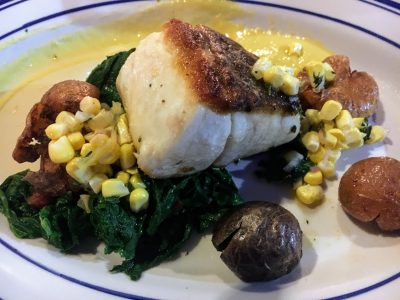 The fish itself was meaty and well-cooked. Unfortunately the rest of plate was a mess. The corn lacked seasoning. The greens tasted like someone boiled the hell out of them, wrung them out and threw them on the plate. The corn sauce seemed like an afterthought. The dish never really came together into anything more than the sum of its parts. And the parts themselves weren’t all that good. 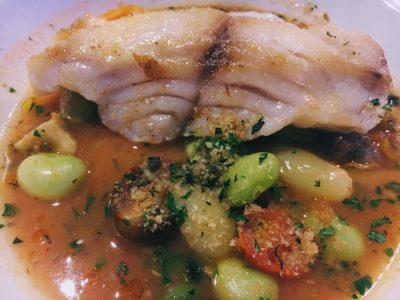 Another poorly conceived dish. The broth was thin and lacked depth of flavor. The clams were largely MIA and the gremolata didn’t register. 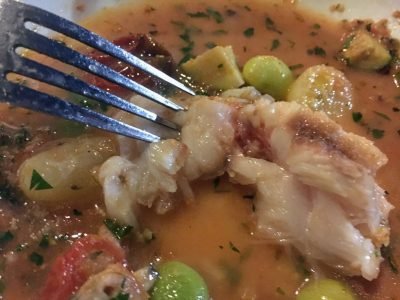 More troubling, the grouper was partially raw inside. If there’s one thing a fish house needs to be able to do, it’s properly cook a piece of fish. I suppose I could have sent it back but didn’t realize it was actually raw until I’d eaten most of it. 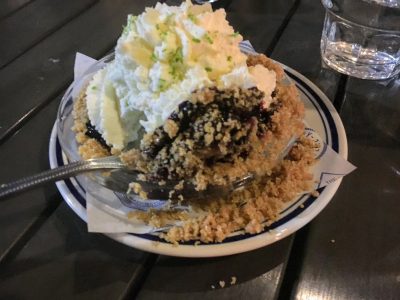 Towards the end of the meal, our server asked why I was taking so many pictures and my wife revealed that I was a blogger, which I never do. The next thing we knew the manager came over to see how we were doing and brought us a comp’d dessert. I’m guessing she didn’t read my first review. Not only was she being super-nice but she brought the same blueberry ice-box pie I didn’t care for the last time. Hello, old friend. I don’t suppose you’ve changed much in a few weeks. I see your crust still resembles wet sand. Mind if I just pick at your blueberries and whipped cream again? I need to at least make a dent so the manager doesn’t think I looked her gift horse in the mouth. I feel guilty enough about what I’m going to have to write; I don’t need that on my conscience too.

After giving The Salt Line every reasonable chance, I’d call it a one-star dining experience. It’s disappointing but not terrible and if you choose well you could put together a decent meal. But there’s very little that’s interesting, surprising or best-of-class delicious. In the long run, I don’t think Tom has done them any favors. His three-star review will fill the seats for a while but people will leave disappointed. Many of them, like me, may decide that life’s too short — and the list of intriguing restaurants in DC too long — to keep going back and expecting different results. That’s the definition of insanity. Plus I just can’t face another serving of that blueberry ice-box pie.

One Response to The Salt Line Redux: I Was Right the First Time