Many of you will remember Galileo, which burst onto the Washington dining scene in 1984 and quickly established itself as one of the top restaurants in town — and established Roberto Donna as one of DC’s first true celebrity chefs. Many of you will also remember the Laboratorio space inside Galileo, where Chef Donna personally prepared a 10-12 course tasting menu for thirty lucky guests a night. A lot fewer of you will remember the Galileo Grill, which occasionally opened for lunch in the Laboratorio space. Me, I’ll never forget the Grill because that’s where I thought Roberto Donna was going to strangle me.

The Grill worked like this. Every now and then, when Roberto was available, Galileo would fire up the Grill at lunchtime and offer a short list of take-out sandwiches — sausage and meat ball subs, hot dogs, and the most popular offering, Roberto’s roast pork sandwich with green sauce. Roberto himself worked the counter and made all the sandwiches himself. There wasn’t even a cashier, just a cigar box where you’d leave your money — cash only — and make your own change. The most exciting part was there was no way to predict when the Grill would be open. You had to get on their email list or be connected to someone who was and be ready to roll when the word came down.

The events leading up to my run-in with Roberto began on the morning of May 17, 2006. I was settling in to start my workday at the FCC and checking in on donrockwell.com, which was — and is — the premier website for food-obsessed Washingtonians to discuss local restaurants. I almost jumped out of my chair when I saw that someone had posted the breaking news: the Grill would be open the next three days for lunch!

I’d never made the lunch pilgrimage from Southwest DC to the Grill on 21st Street NW, but I was determined to go that very day. I hunted down a colleague and explained the whole thing — the unpredictable hours, the cigar box, the chaotic method of getting the word out.

“Sounds sketch,” she said. “Besides, do you think it’s really worth schlepping across town just to eat a sandwich made by Roberto Donna?”

I was stumped. It seemed like a trick question.

Anyway, that’s how I ended up standing in line by myself that day at 11:45 am. In front of me, Roberto Donna (it’s really him!) was a one-man operation, taking orders, joking with customers and making the sandwiches. I got my roast pork sandwich from the man himself and floated out to the nearest bench where I sat and unwrapped it with the reverential excitement of Charlie Bucket unwrapping a Wonka Bar.

Went yesterday for first time. Charming set up with RD serving sandwiches, cigar box for $, etc. Had the pork shoulder sandwich which, while good, was not in the same league as the pork sandwich at Breadline. The meat was drier and the bread didn’t compare to BL’s ciabatta. Loved the green sauce, though, and will go back to try sausage and dog.

For those who don’t know, BreadLine was (and is) a sandwich shop a few blocks away from Galileo. At the time, it was owned by Mark Furstenberg, who single-handedly raised the bar for good bread in DC when he opened Marvelous Market in 1990. He then ran BreadLine at the peak of its popularity and was nominated as the best chef in the mid-Atlantic by the Beard Foundation. In other words, BreadLine was no slouch. My comment actually was more about how good the BreadLine sandwich was rather than a complaint about Galileo’s.

But I soon learned that my intent didn’t matter. The next day, May 19, 2006 — the final day the Grill would be open that week — I shuffled through the door excited about Round Two, trying to decide if I’d go pork sandwich again (this time adding the optional broccoli rabe and provolone) or try something else. Then I saw a piece of paper taped to the wall and almost reflexively started reading it. It was my donrockwell.com post! What was it doing taped to the wall? The guy ahead of me saw me reading and clued me in:

“Roberto is so pissed. This Pork Belly posted that Roberto’s pork sandwich isn’t as good as BreadLine’s. So he bought one of the BreadLine sandwiches and put it up on the counter. He’s asking everyone to tell him which one they think is better.”

I peeked out from the line. Sure enough, there was BreadLine’s pork sandwich on the counter in front of Roberto. It looked kind of sickly, or maybe that’s just how I was beginning to feel. I could see Roberto holding his pork sandwich in one hand and pointing to the sad-looking BreadLine version with the other and demanding “You must answer this!!!”

I didn’t know whether to stay in line or pretend like I forgot my wallet and try to sneak away. Then I heard Roberto ask someone in line “Are you Pork Belly?” and I started to panic. I’d shuffle forward and Roberto would ask someone else “Are you Pork Belly?” and the sweat on my brow began to form rivulets. The cycle played out several more times as I inched forward, Roberto asking customers if they were Pork Belly and to affirm that his sandwich was better, then pleading with them to right this terrible wrong.

Finally it was my turn.

I asked Roberto as innocently as I could for the sausage sandwich — something without add-on options that I hoped would minimize our interaction. I looked away and waited for the inevitable inquisition. And waited. And waited. But it never came! The guy behind me, bless his heart, couldn’t wait to engage Roberto about how terrible the BreadLine sandwich looked and how the problem with the Internet is that every idiot out there has a platform. I took my sausage, dropped a $10 bill in the cigar box without fishing for change and hightailed it out of there.

When I got back to my office, donrockwell.com was lighting up with news of the scandal. One person thought Roberto had intentionally desiccated the BreadLine sandwich to make it look bad. Another asked me skeptically if Roberto’s pork was indeed dry because the meat at BreadLine would “almost have to be liquid” to be any moister than what the Grill was serving up that day.

Finally Don Rockwell himself felt the need to weigh in:

Never having tried the Breadline pork sandwich, I have no basis for comparison. However, I’m happy to say that the pork-shoulder sandwich I had today at The Lunch Grill ($8.00 with the works, including provolone and broccoli rabe) was as good as any sandwich, of any type, that I’ve ever eaten, anywhere, at any price.

That all worried me more than Roberto. I was a relative newcomer to donrockwell.com. The only thing worse than being banned from Galileo would be being written off by the cognoscenti on my favorite website. So I tried a conciliatory note:

The pork wasn’t dry, just drier than Breadline’s. Maybe I should have ordered it with cheese and broccoli rabe, or maybe I just got unlucky and got some pieces that had been sitting (I was there early and there was virtually no line). This was just one visit and one sandwich. If it’s open next week, I’ll go back and try again – if they let me in.

In the end, I don’t know if Galileo would have let me in because I never pushed my luck. I didn’t go near the place again before it closed in late 2006.

Postscript. I love when movies have written updates at the end to let you know where everyone is now. In this case, the screen would note the following:

Roberto Donna had some difficult years after leaving Galileo — Google it if you’re interested — and is now cooking at Al Dente in Northwest DC, where he continues to put out terrific Italian food somewhat under the radar (his gnocchi could be the best in town).

Mark Furstenberg now owns Bread Furst in Van Ness where he continues to be a standard-setter for bread and other baked goods in DC.

Pork Belly has had personal contact with Roberto Donna exactly twice since 2006 — once when Roberto was making the rounds in the dining room of Alba Osteria where he cooked a few years back and once at Al Dente thanking him for dinner on the way out. On neither of those occasions did Pork Belly come close to revealing his identity. Pork Belly figures that either Roberto has forgotten, in which case why mention it, or he hasn’t forgotten, in which case why mention it times two.

One Response to The Time Roberto Donna Wanted to Strangle Me 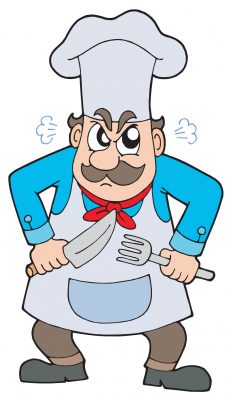