If I’d written this post a few months ago, it would have looked completely different. I’d just gone for pizza at two DC hot spots, Timber Pizza and All-Purpose Pizzeria, and I was ready to trumpet one of them as the best pizza in DC and one of them as the worst (you’ll have to read on to find out which was which).

Part of me wishes I’d written that post when I had the chance. It would have been clean, definitive and tailor-made for the click-bait crowd. It also would have been wrong.

What happened was I let so much time go by that I decided to visit both restaurants again, just to refresh my recollection. I didn’t really expect anything to change. These were pizzas, after all, not seasonal specialties. Big mistake. The scientific method, I should have known, doesn’t care about your storylines, only provable facts. And here the facts turned out far more slippery and nuanced than my pat narrative allowed.

On my first visit to Timber, I thought I’d found DC pizza nirvana. It reminded me of my favorite pizza in the greater metro area — Frankly…Pizza! in Kensington — both of which started out as mobile operations before finding brick-and-mortar locations. The crust was thin and wood-fired but slightly crisper than traditional Neapolitan. It had a chewy, almost spongy, mouthfeel that contrasted beautifully with the prominent smoke, salt and char. The tomato sauce and toppings were fresh and well-proportioned to the crust. 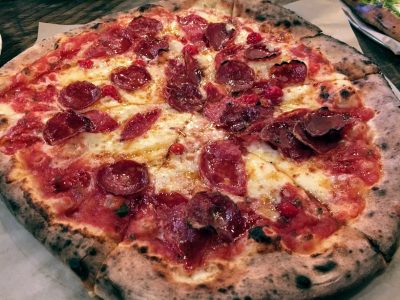 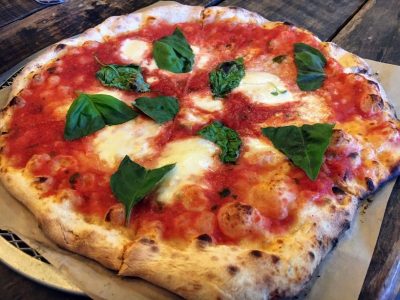 The dining area was cozy but we had no problem finding seats for two after we ordered at the counter. I imagined coming back again and again and becoming a regular. If I were a Yelper, I’d hit the 5-star button and never think twice. 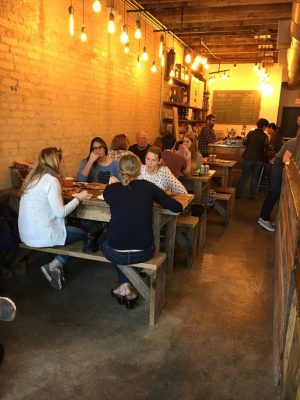 As I mentioned earlier, I went back to Timber a few months later. It was a crowded Sunday night. The seating area, which had felt cozy on my first visit, now simply felt tiny, with nary a seat to be found. The process of ordering and then trying to find a table for our party of three before the pizzas went down the assembly line and into the oven turned our evening into a stressful game of beat-the-clock.

Worse, the pizzas were not the same. I decided I had to try The Green Monster, which was named one of “The 40 Essential DC Restaurant Dishes of 2016” in the Washington Post. 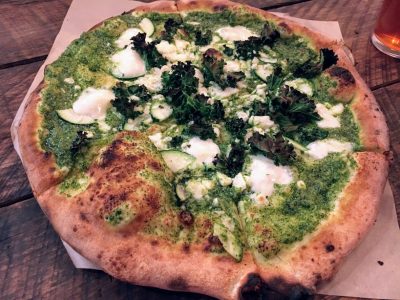 No doubt the color is striking and really pops on Instagram. But the crust I loved was overwhelmed by the coating of oily pesto, the watery fresh mozz and soft feta.

To compound the problem, I inexplicably ordered another pre-set pesto-based pizza, The Penelope. Not only did this pizza also have the thick slathering of pesto, the smoked paprika added an unpleasant acridity (if that’s a word) that stifled any flavors the pesto missed. 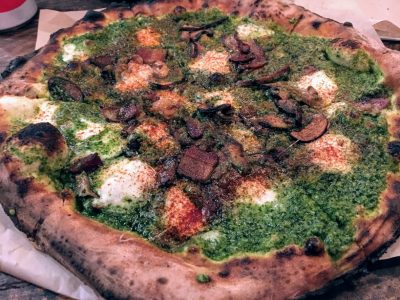 If I were a Yelper who visited Timber only on night number two, I would have expressed outrage and disbelief at the positive reviews this place was getting and said I was being generous in giving it 2 1/2 stars.

So I had one great experience and one mediocre experience. Like a modern-day Javert, I couldn’t live in a world that countenanced such contradictions. Which is how I found myself stopping at Timber yet again after work last Tuesday night.

My third visit was much closer to my first than my second. I ordered a simple tomato-based pie. I easily found a seat and chatted with the pizzaiolo, who was using his downtime between pizzas to make adorable wood-fired ice cream cones. And the crust, I’m relieved to report, was back in all its smoky, chewy, salty goodness. 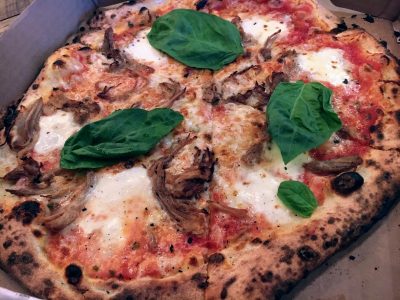 All-Purpose was a roller-coaster of a different kind. My expectations were sky high after Tom Sietsema declared that “pizza is the star” in making All-Purpose his #1 restaurant in all of DC in his 2016 Fall Dining Guide. So imagine my surprise when this misshapen cave-drawing of a pizza was set down before me. 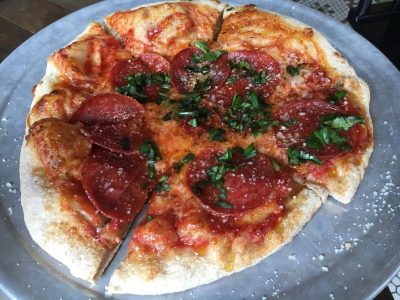 Here’s what I wrote at the time: “This thing is a mess. A soupy center gives way to a couple of inches of decent pie, ending in a massive end crust virtually devoid of toppings. It’s rare that I don’t finish what’s in front of me but those end-crust bread bombs were too much to choke down. And while putting honey on a pizza must have seemed trendy, it turns the tomato sauce into a dead ringer for the Spaghetti-Os of my youth.”

Still, I don’t give up easily when the WaPo food critic picks a pizza place as his top restaurant. Maybe I got the wrong pie. So I went back to All-Purpose after re-reading Tom’s review: All the pies are swell, although Duke #7 invariably calls to me with dabs of ‘nduja and tangy vegetables.” 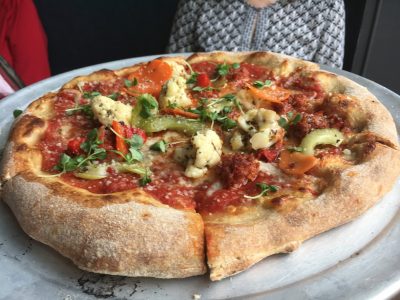 If this pizza invariably calls to Tom he may want to look into Do Not Call list. It wasn’t quite as inedible as my first visit but the pickled vegetables elbowed everything else out of the way and the end crust was still like gnawing on a baguette. 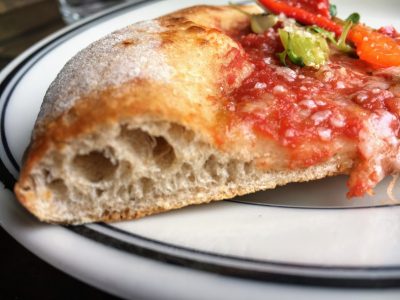 But here’s the revelation. This time I ordered several non-pizza dishes and they were all very good to excellent. 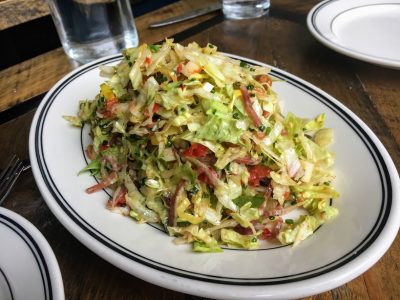 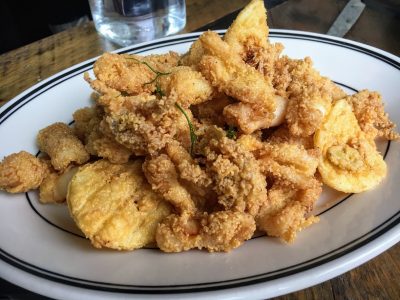 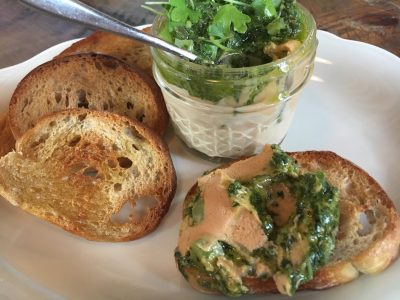 I couldn’t have been happier with the throwback chopped salad, greaseless fried calamari with lemon slices that reminded me of the old frito misto plate at Palena, and, most of all, the smooth tuna mousse topped with a lovely herbaciousness. The key to success, I thought, just might be to order anything but pizza at this pizzeria.

But I needed to be sure. So I had one final lunch at All-Purpose last week — the day after I stopped for my post-work pizza at Timber. I concentrated my ordering on non-pizza items and threw in a pizza just in case I unexpectedly needed to run a marathon and needed the carbo load.

The good news is my non-pizza hypothesis proved right. I ordered all new dishes and each was terrific, from the sprightly Caesar salad with toasty breadcrumbs to the lovely fried baby artichokes to the textbook eggplant parm.

But the shocker was the DIY pizza with ‘nduja and wild mushrooms. It was…pretty good! The mongo crust was under control and without the honey or the pickled vegetables, the toppings were swimming with the tide rather than against it. 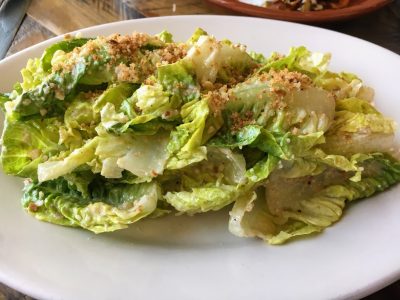 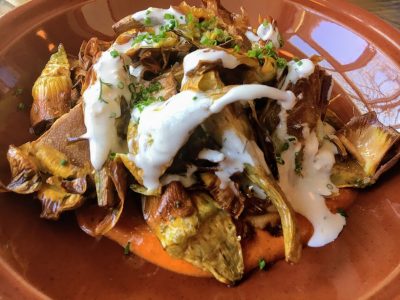 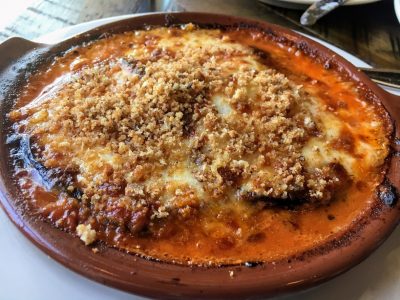 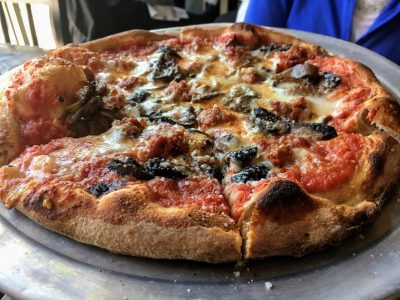 It still isn’t one of my favorite pies by a long shot. The deck ovens can do crispy but not smoky and the crust is still on the bready side. But this one was a perfectly respectable companion to the rest of the meal.

What should have made me happy, however, only made me more frustrated as once again my narrative didn’t quite hold up. It turns out you can get a decent pizza here, it just takes some judicious choices and a little bit of luck. To find out how much, I did what anyone else in my shoes would have done. I walked around the restaurant and peered at the pizzas other people were eating.

I’d say maybe two out of every three pizzas looked decent, meaning that the crusts were sufficiently under control to make for an enjoyable pie. While two out of three ain’t bad, that rule only applies to meatloaf and not pizzas.

But if the pizzas are inconsistent, you can always count on the room, which feels like the faux Italian farm house of your dreams. Plus they take reservations, so no hovering required. 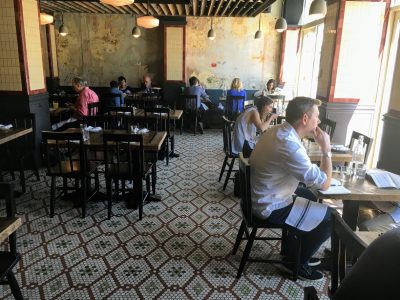 In the end, reality is more complicated and less sensational than I initially thought. It’s good to keep that perspective in mind when Yelpers and bloggers like me draw dramatic conclusions from limited experience. There’s something to be said for old school restaurant reviewers who visit a place multiple times before making broad pronouncements. On the other hand, Tom must have visited All-Purpose multiple times and still loved their pizzas, so go figure.

For now, the bottom line is this:

Check out Timber for pizza if it’s a weeknight or off hours or you don’t mind the crowds. Take as few people as possible. Order a tomato-based cheese pie and add no more than one or two ingredients. And for the love of god, steer clear of the pesto.

If you want pizza as part of an overall meal and you care about having a nice space to dine in, go to All-Purpose. Again, I’d avoid the combinations and stick with simple DIY combinations. Order anything else on the menu with confidence.

PS — If you want even better pizza and are willing to cross the beltway, check out Frankly…Pizza! in Kensington or Inferno Pizzeria Napoletana in Darnestown.