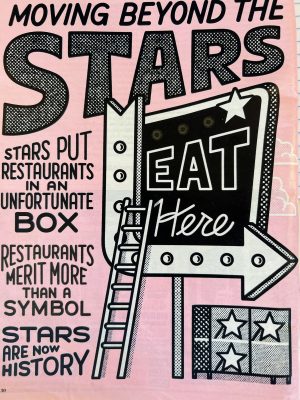 You may have seen that Tom Sietsema, the longtime Washington Post food critic, recently decided to permanently end the awarding of stars. His column explaining his decision made a powerful case, just not the one he was trying to make. He didn’t convince me that he did the right thing by dropping ratings from his reviews; he convinced me that I needed to add them to mine.

Let’s start with why ratings are a good thing. People like them and use them. Indeed, before he explains why he’s dumping them, Tom notes that he originally used them to give readers “an immediate take on a restaurant.” That’s still true. Most people have lives that only occasionally involve thinking about restaurants (I know, go figure). They use ratings to triage their time — why read the gory details of a 1-star review from a reviewer they trust? More likely they’ll do what I do with movies: flip through the Weekend section and stop to read the three or four star reviews (or sometimes two-star reviews) that catch my eye. But if Ann Hornaday declared tomorrow that she’s no longer awarding stars, my reaction wouldn’t be to buckle down and read every movie review. Instead, I’d ask my wife if she wanted the Weekend section because I wasn’t going to look at it.

So why is Tom ditching the stars? No good reason.

First, Tom reports that he can count on one hand the number of readers who have told him they want the stars back. He claims many more, including chefs, have told him that the lack of stars encourages them to read more of his columns. I assume that Jeff Bezos did not sign off on the who-happens-to-reach-out-to-me methodology of consumer research. It’s hardly surprising that most people who approach someone like Tom Sietsema are fans who want to say something nice. But the real tell is that he notes chefs like the lack of stars. You would think that chefs would not be top-of-mind when a restaurant critic is thinking about his audience. The truth is that most DMV residents don’t even know who the Post’s restaurant critic is — and only a sliver of those are tracking his internal tsuris about stars. The goal should be making it easier for the broader public to find good restaurants, not to cater to the cognoscenti.

Second, Tom insists that the 1-4 star scoring system didn’t work very well. He says there’s not enough room to reflect nuance with just four stars, even with half-stars added to the equation. But even if that’s true, it’s an issue with the particular system and not ratings per se. If four stars lack nuance, why not move to a numerical scale from 1-100? The potential for nuance would be 10x. Tom acknowledges that someone suggested a numbered system “but her idea sounded complicated.” Maybe Tom’s friend also invented the scoring system for Olympic figure-skating. Then I take Tom’s point. But Rotten Tomatoes uses a 1-100 scale and I’ve never heard anyone complain that it’s just too difficult to wrap their head around.

Third, Tom claims that “reading the full review” is the best way for readers to assess whether the restaurant is right for them. Ok, sure. People should read the full review. They should also floss twice a day and read the position papers of everyone running for school board before entering the voting booth. But they won’t, so now what? I think you cut people some slack and find ways to give them as much information as possible. Granted, folks who read the full restaurant review may make more informed choices than those who just looks at the rating. But it’s an imperfect world. Don’t let perfection be the enemy of someone finding a good Thai restaurant in Arlington.

Fourth, Tom proclaims that “given all the industry’s challenges, restaurants merit more than a symbol to sum them up.” That sounds more like a pandering applause line from someone running to head the National Restaurant Association than a serious argument. Even Prince had a symbol to sum himself up. And if restaurants deserve more than a symbol in these uncertain times, why not movies, TV shows, and wine-making? They’re all popular activities with an artistic component that seem to be able to live with ratings of one sort or another without falling into some kind of puffing self-regard.

Finally, Tom likens himself to Chef Aaron Silverman of Pineapple & Pearls, who told Tom he wanted to take the fine dining model and “smash [it] to the ground.” The concluding line of Tom’s piece is “If chefs can smash things to the ground, so can critics.” Um, sorry to break it to you, Tom, but ditching stars isn’t re-inventing the genre. As far as I can tell, the reviews themselves are exactly the same. And I see you still include information on things like decibel levels and Covid protocols. Which is all terrific, but let’s not pretend that dropping stars makes you some kind of rule-breaking rebel.

Listen, I get it. Tom is the Big Dog. He’s the main restaurant critic for the Washington-freakin’-Post. He obviously gave a lot of thought to this and he’s not going to reverse himself. And why should he? He’s probably hearing nothing but praise from friends and industry insiders for his courage in expunging the crassness of ratings. But that’s what makes this so frustrating. Because he’s so powerful, his decision matters. It will result in fewer people reading about restaurants because it increases the cost of admission. That’s a huge bummer. And while there’s nothing my little blog can do to offset that, I’m going to add a rating system anyway (probably on a 1-10 scale with decimal points, but open to suggestions). I should have done something like this long ago, but, frankly, I hadn’t thought through how the lack of ratings made my blog less accessible. Now I have. And I’m not being sarcastic when I thank Tom for pointing the way.

2 Responses to Tom Sietsema Dropped Stars From His Restaurant Reviews; I’m Adding Them to Mine