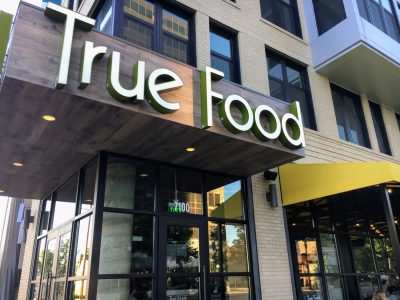 True Food Kitchen is hard not to like. Believe me, I tried.

I walked into the newly-opened Bethesda location like Anthony Bourdain walking into Applebee’s. I already knew what I thought. We weren’t going to get along.

Start with the fact that it’s a “health-driven” restaurant chain with 23 locations in 11 states. Its website proclaims that “every meal at True Food Kitchen is an opportunity to further your journey toward healthy living.” Blech. To me, every journey begins with a single step — away from people who use the word “journey.”

Fittingly, the chain was co-founded by this guy, new-age guru Dr. Andrew Weil:

My only exposure to Dr. Weil was flipping past him on PBS preaching to a crowd of Stepford followers. I never bothered to watch long enough to find out what kind of touchy-feely dogma he was peddling. Certainly nothing about the spirituality of good food. It looked like he survived on nuts and berries that he foraged from his beard.

Add to that the portent that True Food was opening in the heart of Bethesda. If there’s one thing we excel at in Bethesda, it’s mediocrity. The last two restaurant openings I got excited about, Community and Q by Peter Chang, were disappointments. And those were interesting concepts with strong local bloodlines. True Food Kitchen was a national chain that already had a local outpost in Merrifield. The thought that we were going to break our losing streak with a restaurant spin-off out of Merrifield was inconceivable.

And yet, somehow, against all odds, it turns out we did.

I sensed it as soon as I walked in the door. It’s a big, open space but it it didn’t feel overbuilt. It was full of energy. The bar was hopping. The cooks in the open kitchen were bustling. Other than a slightly stressed gaggle of Bethesdians crowding the host stand, the vibe was spot on.

The other striking thing about True Kitchen is the diversity and genuineness of the staff. Our waitress revealed that it was her first restaurant job and she was really anxious to do a good job because they took a chance on her. We were won over even before we ordered our food. It’s a great idea for restaurants: hire nice people and let them be themselves. 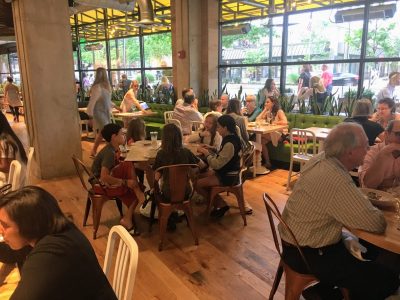 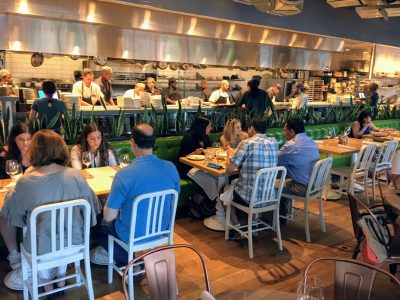 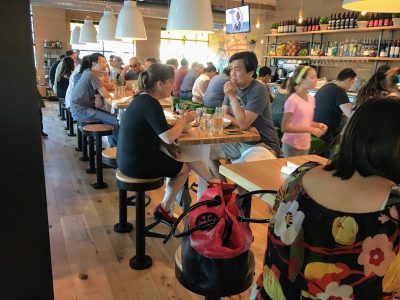 So how’s the food? It’s surprisingly good. I was expecting either spa cuisine that looked pretty but left me hungry or the kind of drab, tasteless health food from the ’70s that gave tempeh a bad name. What I got was something more satisfying, modern and flavor-forward. 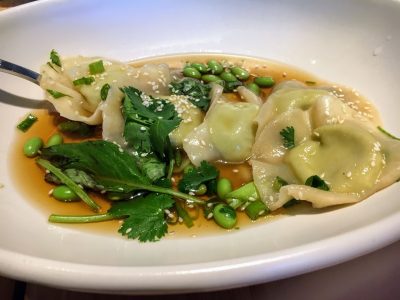 A lot of people order these dumplings. And they’re not bad. While edamame isn’t that flavorful a dumpling filling, puree it with some ricotta, sheath it in a supple wrapping and float it in a soothing dashi broth with some fresh herbs, and you’ve got a solid B. 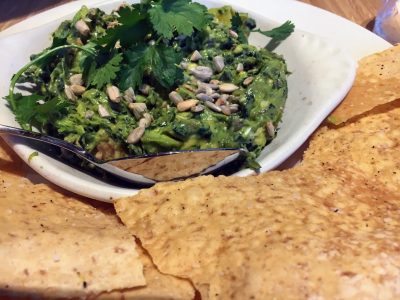 I’d like this dish better if they called it “kale avocado dip” rather than “kale guacamole.” Once I stopped thinking of it as guacamole, the citrus chunks and other out-of-place ingredients didn’t seem as jarring. Fine as a shareable appetizer if you repeat the mantra. 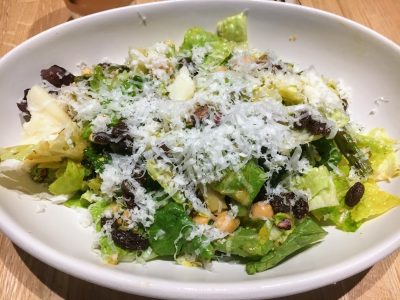 It’s hard to get a good dinner salad these days. I’m talking about a non-kale/non-Caesar/non-beet/non-burrata salad that’s more than just a toss of leaves. This salad is a terrific balance of ingredients all brought together by a zippy Sicilian vinaigrette. 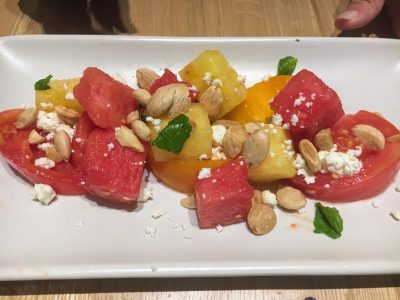 Simple but nicely done. Too many places serve a tomato-watermelon salad when one of the two main ingredients aren’t in season and ripe — sort of like the shanda of an out-of-season Caprese. True Food doesn’t make that mistake. 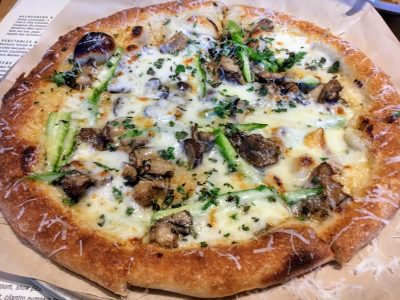 A perfectly respectable pie for a place that doesn’t specialize in pizza. The crust lacks the complexity that comes with lengthy fermentation, but if you like a crust that’s thin and crispy and doesn’t flop when you pick it up, this fits the bill. I also saw several tables with kids who were happily munching on a pizza (not this mushroom one) while their parents focused on other parts of the menu. 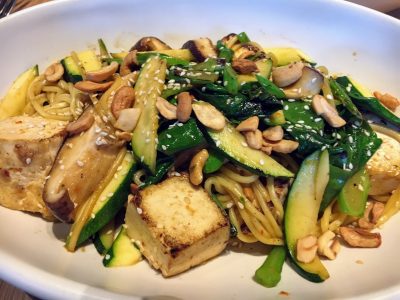 To me, the core of the menu is the Bowls. You can choose Ancient Grains, Red Chili Noodles, Teriyaki Quinoa or Spicy Panang Curry and then add tofu, chicken, shrimp, steak or steelhead. I’ve never ordered tofu in a restaurant before — and I may never again — but I thought when in Rome, etc. It wasn’t bad and the rest of the noodle dish was fresh, well-cooked and even brought a touch of heat. 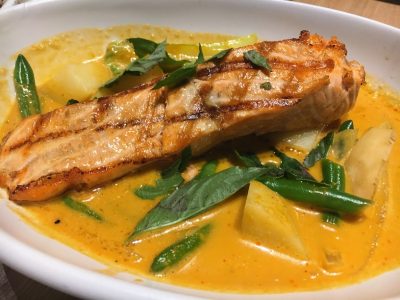 Even better than the red chili noodles was this panang curry bowl with steelhead. I wouldn’t have blinked if I was served this in a decent Thai restaurant. The fish was well-cooked and the broth, though far from Thai spicy, was flavorful and comforting. The potatoes were a tad underdone, but hopefully that’s just a one-off. 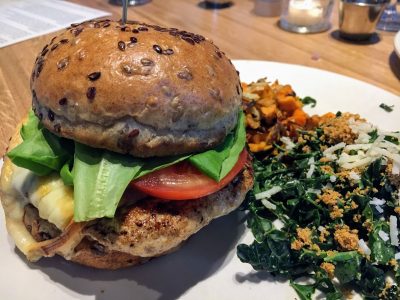 Another thing I’ve never ordered in a restaurant is a turkey burger. To me, it’s like going to the Louvre and spending the whole time walking around the collection of Greek vases. Yeah, you’re visiting the museum but you’re not exactly making the most of it.

So imagine my surprise when this baby showed up. The patty itself was nicely browned and not dried out, which is always a risk with turkey. But the best part was the smoked gouda, which lent a smoky flavor to the sandwich and helped provide a pretty good impression of a bacon-cheeseburger.

Note: one thing True Foods apparently doesn’t do is french fries (or fried anything for that matter). Instead, you have your choice of sweet potato hash or kale salad (or 1/2 and 1/2). The kale salad is fine but the sweet potato hash could use some re-tooling. Even if you’re not doing fries, you can still put something on the plate that doesn’t taste like it came off a steam table. Maybe a quick trip under the broiler would bring the hash back to life and add some crunch. 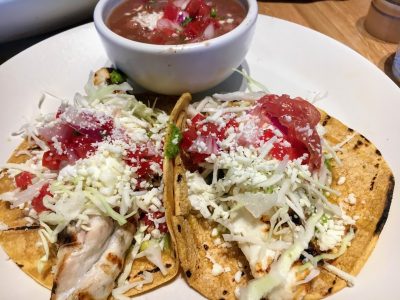 Some very good fish tacos. The fish itself is moist and the proportion of tortilla to filling is just right. I had grilled fish tacos the night before at Millie’s, another new hot spot in Spring Valley DC, and these are better. 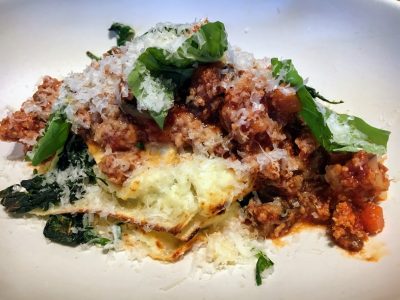 Don’t be dissuaded from ordering the lasagna because it sounds heavy. There’s nothing heavy about this lasagna. The pasta sheets are fresh, the whipped ricotta is perfumed with lemon, and the chicken sausage is draped over the top with just enough tomato sauce to enliven it. Besides a little parmesan, there’s no mozzarella or other melted cheese to weigh it down. I can’t say you won’t miss the gooeyness but the flavors are so good that I don’t think you’ll miss it too much. 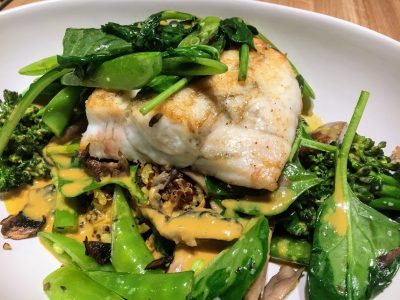 The best dish of the night (and the most expensive item on the menu). The sea bass is perfectly cooked. And the melange of green vegetables with ancient grains and umami sauce mix together to provide a delicious supporting role. I couldn’t figure out what’s in the umami sauce besides garlic; I may have to have this dish another half dozen times until I’ve cracked it. 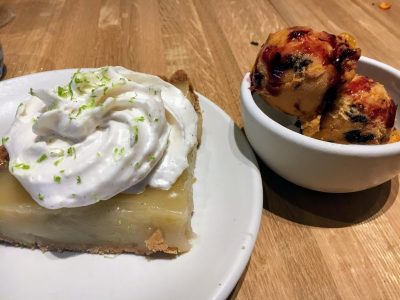 The only real fail of the evening. The filling has an unappealingly viscous consistency. Key lime pie is creamy, made with sweetened condensed milk, not phlegmy. The crust also has an odd consistency. It’s listed on the menu as gluten-free which may explain things.

If you’re like me and never heard of sea buckthorn, it’s a shrub that produces orange berries. Apparently it’s popular in China and northern Europe where it’s used in drinks, jams or pies. It’s also a natural remedy. According to WebMD, it treats everything from arthritis to gout to asthma to diarrhea to high cholesterol. Whatever. It makes for a nicely tart sorbet, with a flavor that’s hard to place. The star here is the Luxardo cherries, the elegant Italian export that may single-handedly bring back maraschinos.

So True Food is a hit. And it’s easy to see why. It solves a lot of problems. Like how to find a restaurant with (1) lots of choices, including options for kids, vegetarians and people trying to be good; (2) a nice bar; (3) a comfortable setting; and (4) good food that won’t break the bank.

The next time I see Dr. Weil on PBS, I’ll see him in a whole new light. Oh, I’ll still change the channel, but at least I’ll be thinking of the pleasant restaurant down the street when I do it.