There’s no obvious reason to review these two restaurants together, other than the fact that I ate at them both in the past couple of weeks. One does elevated American comfort food, often with an international spin, while the other does “bistronomy,” a modern and more casual interpretation of French cuisine.

But they have more in common than you’d think. Both opened in 2017 with pedigreed young chefs (David Deshaies of Unconventional Diner was born in France and trained under the late, great Michel Richard at Citronelle and Central; Ryan Ratino of Bresca — still only 27 — worked in New York under modernist pioneer Wylie Dufresne and at minibar under Jose Andres). Chef Deshaies elevates humble diner food; Chef Ratino de-elevates stuffy French cuisine. In the end, they both end up in a roughly similar culinary neighborhood and, most importantly, are competing for the same customers.

So if you’re trying to choose between the two, here’s my bottom line.

I really, really liked Unconventional Diner. It’s #10 on my current list of top-25 DC Restaurants. I’ve now eaten there twice and each dish was distinct, well-conceived and well-executed. I want to go back and have several of them again.

Bresca is much harder to get my arms around. There was one memorable high (a dessert) and one memorable low (unfortunately the most expensive thing on the menu), but most of the meal is a blur, even though I took notes at the time. I can’t tell you what a weird experience that is for me. I don’t have many talents, but one of my few is that I can remember the details of everything I’ve ever eaten. (Try me sometime; stop me in the street, throw out a restaurant and I’ll tell you when I ate there and what I ate — along with everyone at my table.) So the fact that Bresca didn’t leave any footprints in my brain is a troubling sign. When I look at the pictures I took, I wonder “did I really eat that?” And it’s like I don’t know who I am anymore.

While both restaurants provide flexibility in ordering, from small shareable plates to large entrees for the table, Unconventional Diner has options that let you order a more traditional meal if that’s what you want. So you can order several plates to share and then get an order of Michel Richard’s short ribs for the table. Or if you’re one of those lost souls who refuses to share your food, you can order dishes that look very much like a traditional appetizer, entree and dessert and spend your night keeping the rest of us at bay with your fork. 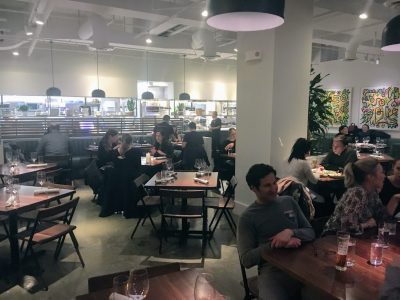 The space at Unconventional Diner is somewhat odd and lacks cohesion, with different parts of the restaurant in use during different day parts. This is the main dining area, which has sort of a California cafeteria-cum-indoor-patio vibe. 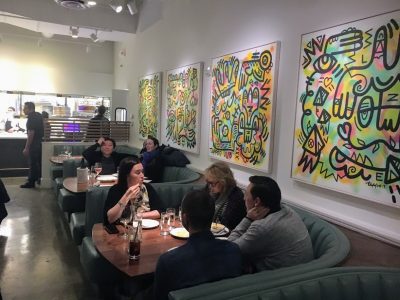 The booths and modernist make-your-own-Rorschach-test paintings along the wall provide the only real comfort and color to the room. 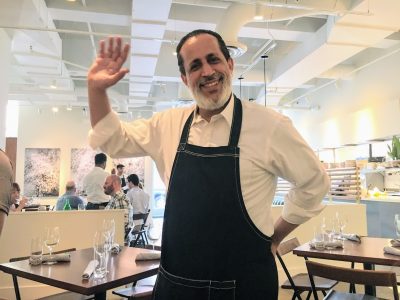 But just when you think the room lacks character, Salah shows up at your table. Salah is from Marrakesh and has character to spare, spending several minutes going through the interstices of the menu with the vigor of my high school english teacher dissecting Ozymandius. His excitement is contagious even if some of his recommendations don’t quite live up to the hype.

There’s nothing worse or more ubiquitous than dry cornbread and these moist and flavorful muffins remind me why I keep trying. The soft butter schmear along the lip of the plate doesn’t hurt, either. 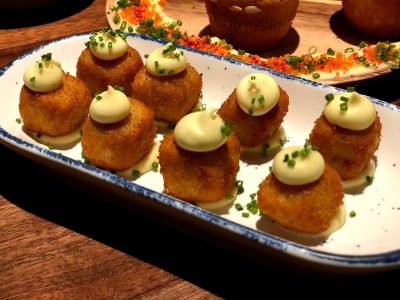 You know what kids don’t do anymore? Tongue twisters. We used to spend hours being amused trying to repeat “rubber baby buggy bumpers” or “toy boat” over and over again. Now kids probably just have a gif of someone literally twisting their tongue to keep them entertained. My kids were with me during my first meal at Unconventional Diner and you should have seen their eyes light up in delight when the server left and I challenged them to say “pot pie poppers” ten times fast. Or at least they did something with their eyes. Could have been rolling them to the back of their heads, but I’m pretty sure it was delight.

Anyway, the pot pie poppers themselves have good flavor but the ratio of coating to filling would be better if they were slightly larger. Still, it’s hard to nitpick when you’re popping little nuggets into your mouth that taste like an entire chicken pot pie. It’s Violet Beauregarde-type fun without having to visit the juicing room afterwards. 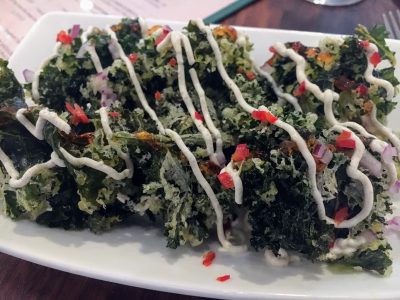 What happens when kale chips and Rasika’s palak chaat have a baby. Not sure you can really call something nachos without any cheese, but definitely tangy and tasty. 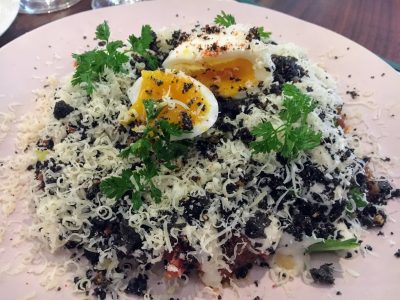 A really good riff on a Caesar. The flavors all work together and that black garlic crumble is a new one on me that ties it all together. 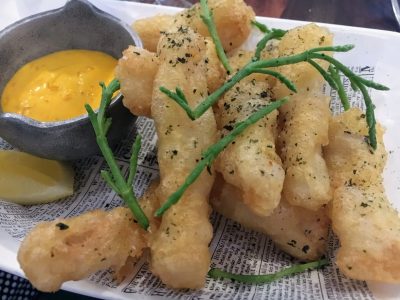 A Salah must-order that didn’t quite live up to the advance billing. They were good, with a light tempura batter, but in the end they were just fish sticks, with all the elevation of Dirk Nowitzki. 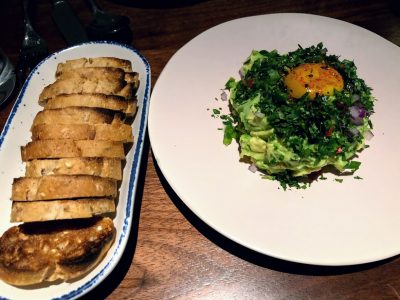 I hate deconstructed anything but this is the exception that proves the rule. (I never understood that saying. Why does an exception “prove” a rule? Isn’t an exception just an exception?) Here, the avocado comes separately from the toast so you can use as much or as little as you want. And it’s not just mashed avocado but almost a guacamole enriched with egg yolk and a shower of cilantro. 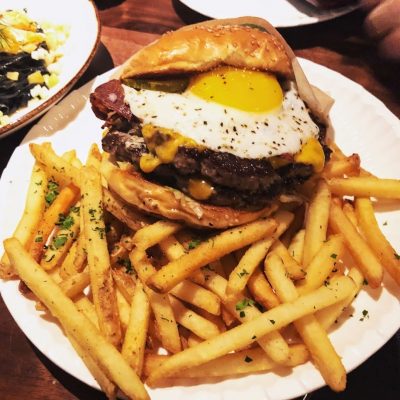 Excellent burger and crisp fries. Had to share this one with the other four people at my table but already plotting a solo lunch in the near future so I can have one of my very own. 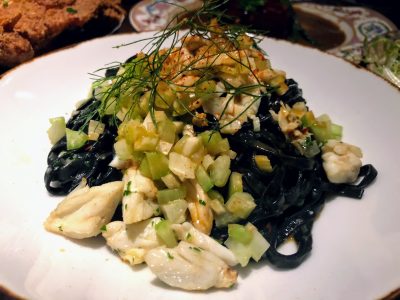 Another Salah recommendation, this one turned out better with big, sweet chunks of lump crabmeat and a light touch on the sauce that let the crab shine. 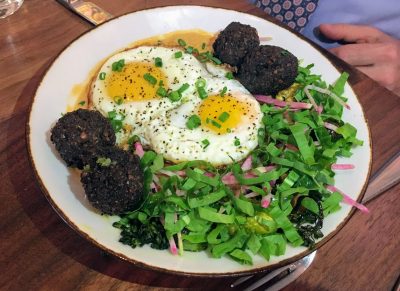 Tom Sietsema sang the praises of this chickpea stew, which he called “so vivid it appears to be auditioning for a magazine cover.” Well, unless Tom subscribes to Shredded Lettuce Monthly, I just don’t see it. Still, it was a pretty good dish with the eggs and felafel creating sort of a shakshouka that would be a satisfying entree for someone avoiding red meat. 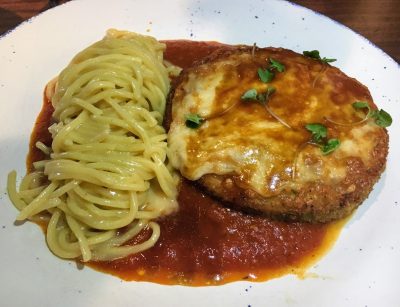 A double-stacked chicken parm with gooey cheese and spinach between the layers as well as melted cheese on top. Unlike many chicken parms, none of the elements is an afterthought including the chef-y twirl of pasta on the side. 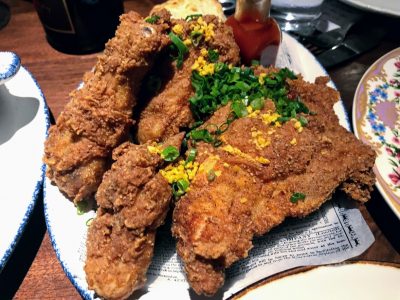 Moist, well-cooked chicken but the key here is the skin, which is extra crispy and savory.

Yes, you can eat lighter at Unconventional Diner (and when I say you, I mean not me). This salmon got raves from two of my friends, both of whom particularly loved the zucchini with pine nuts. 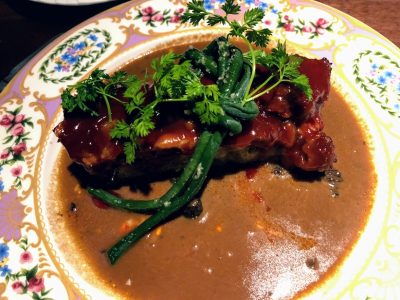 Another favorite of mine, the meatloaf is made with beef, pork and veal and incorporates gruyere for added flavor and richness. It’s topped with a Sriracha-ketchup-honey glaze, long beans and cilantro. But the killer is the morel mushroom gravy which takes the dish into diner-of-my-dreams territory. 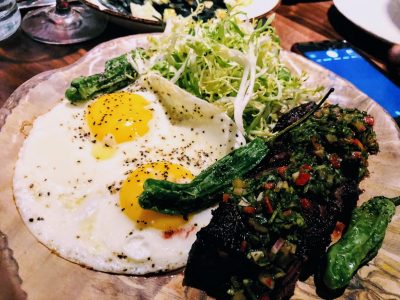 I’m a big fan of steak and an equally big fan of eggs. Just not a huge fan of the two together. Am I supposed to together or separately? Do I dip the steak in the yolks or eat the whites with the steak as well? Please email me at rickeatsdc@gmail.com and tell me what I’m missing. 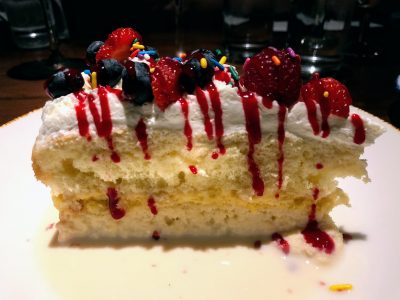 Chef Deshaies’s wife Ana is in charge of pastries, like this fluffy-yet-dense tres leches cake topped with berries. 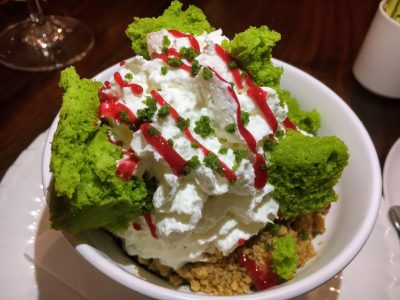 Or try this taste of spring in the form of a sundae with strawberry ice cream, rhubarb sauce and pistachio cake. The green sprinkles on top aren’t cake crumbs, they’re little basil chips that add another pop of flavor. 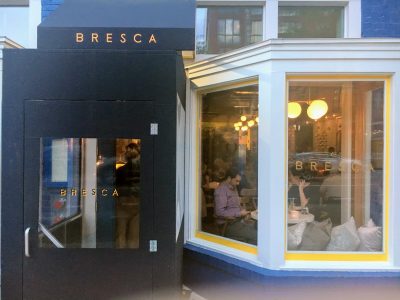 Bresca is one of the critical darlings of the 2017 dining scene. With the public not so much, judging by the availability of reservations on Open Table most nights. It’s like a recent-vintage Woody Allen movie on Rotten Tomatoes where the gap between the critics’ score and the audience score means one side or the other just doesn’t get it.

One of the first things you’ll notice in the decor and on the menu is that a hexagon motif is everywhere. Why? I wasn’t sure, but I had a sinking feeling that my server was going to tell me. Sure enough, we’re told that Bresca means honeycomb in Spanish. And then something about the entire universe being composed of hexagons from the biggest planets to the smallest organisms. I can’t be sure because by that point I was bleeding out. 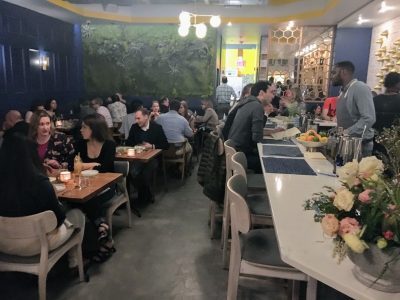 The Saturday night scene was hopping and loud. Note the “living wall” in the back composed of natural grasses, mosses and the ashes of naturalist Euell Gibbons. 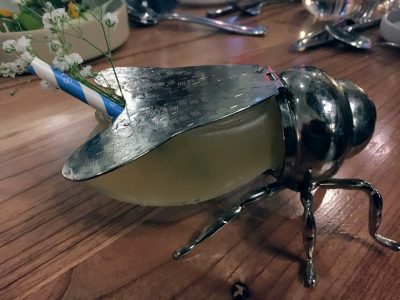 This Bee’s Knees cocktail must be one of the most Instagrammed pieces of 2017. Too bad the cocktail doesn’t live up to the photogenic packaging. This will be Exhibit A in my forthcoming indictment of the Instagram era. 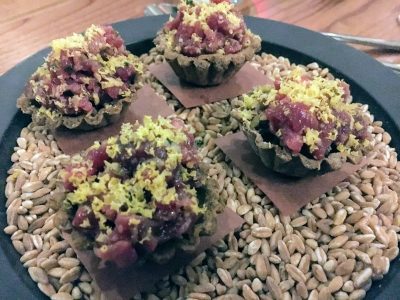 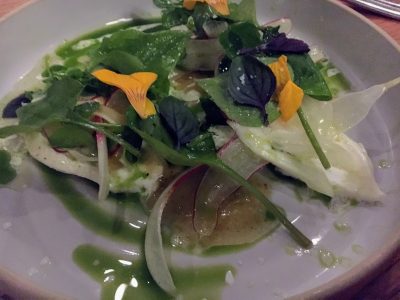 I appreciate a slightly different burrata presentation — the cheese is sliced rather than plated as a ball. The rest of the melange is fine — or at least that’s how I remember it. 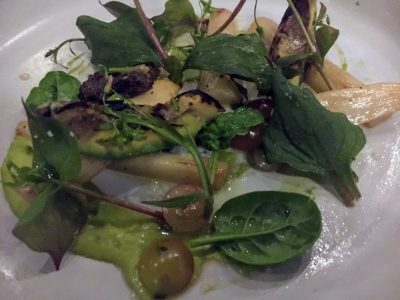 Didn’t I just have this? No, this time it’s white asparagus under a bed of similar-looking greens with green sauce. The server wants you to know all about the three leaves of “ice” spinach on the plate, where the spinach is allowed to freeze at night and thaw out during the day. It tastes like spinach. I’m all for seasonal and procuring the best raw ingredients, but unless it shows up on the palette it feels like an academic exercise. 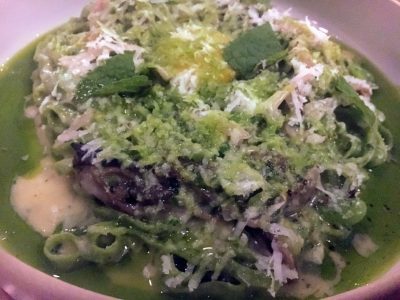 My third green plate in a row. I get it, it’s spring. This green plate contains ramp-infused pasta; “carbonara” is in quotes because they use grilled mushrooms instead of pork. The pasta’s actually pretty good, although I wouldn’t want to eat a whole plate of it. A four-way split with my table mates is just about right.

No complaints about this for-the-table duck dish. The breast meat is plentiful and well-cooked, its fat properly rendered and its skin crisp. The duck sausage is also very good. Not pictured is a large toast with a slathering of duck liver mousse. 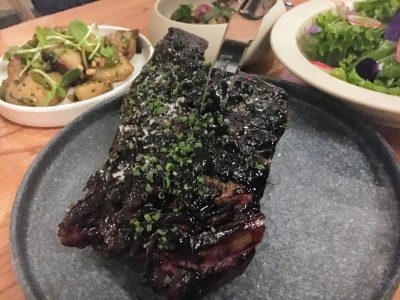 A $66 disappointment. If you’re going to have only three entrees on the menu — all designed for sharing by two or more — they all have to be spot on. This lamb shoulder wasn’t. While parts of it were tender and pulled apart easily, much of it was still quite fatty and tough. 48 hours is a long time but apparently not enough. The bark itself had a nice sweet-and-salty vibe but the meat quickly became less interesting as you dig underneath. The braised lamb that comes with the shoulder is good if unexciting, as are the accompanying sunchokes and salad. 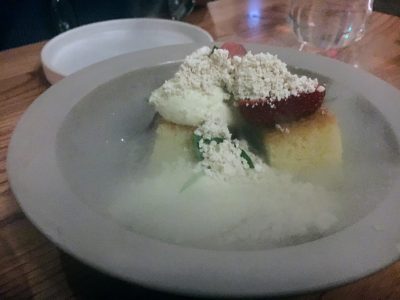 This dessert certainly makes an appearance when the glass lid is removed and a liquid nitrogen fog comes billowing out. Unfortunately, the dessert itself makes you long for the fog to roll back in. None of the components are very good, from the cake to the nitro cake batter. Some things don’t improve when they’re freeze-dried. There’s a reason restaurants don’t serve Taster’s Choice. 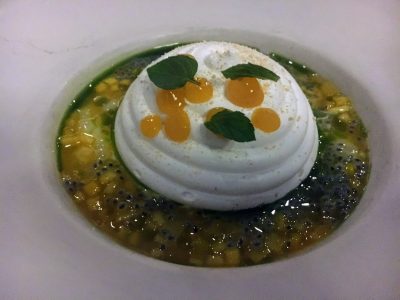 On the other hand, this Meringue/Tropical Ambrosia is wonderful. Chef Ratino served this dessert at his old restaurant Ripple, and it hasn’t lost any of its appeal. The combination of meringue and luscious tropical fruit is the perfect way to end a meal.

So there you have it. Two restaurants that are so alike and yet so different. Unconventional Diner and Bresca are the Samantha Stephens and Cousin Serena of DC dining. As Darrin in this analogy — the first Darrin, please — I know where my heart lies.