You might remember when local-boy-turned-Manhattan-celebrity-chef David Chang announced he was opening an outpost of Momofuku in City Center in late 2015. It was bedlam. Chang was bringing his pork bao and ramen home to DC! And there’ll be a Milkbar too, with its legendary “crack” pie and cereal milk soft-serve! The whole thing sent foodies into a fit of rapture, practically speaking in tongues as the opening date got closer, but even civilians got caught up in the Momofuku-is-coming maelstrom.

If David Chang strolled through City Center in those days, it would have looked a lot like John Legend singing “Hosanna” in front of the mosh pit in Jesus Christ Superstar. Except maybe a tad more adoring.

And for a while it all seemed to work. The bao really were great, not just the famous pork belly ones but the shrimp, beef and shiitake varieties as well. The ramen was good too — outclassed by several others in the area, but this was the Momofuku ramen, for chrissakes. It had brand equity.

But then something happened that happens to a lot of successful restaurants that try to clone themselves in far-flung locations. The excitement subsided. People had heard the greatest hits album, and while they still appreciated the music, they wanted some new material. The buzz moved elsewhere and the crowds followed.

By last fall, things had reached a breaking point and Chang, to his credit, stepped up. He took responsibility for how things had gone and decided to make big changes. As reported in Washingtonian, Chang blames himself for “micromanaging” the Momofuku kitchens in DC and elsewhere and not giving local chefs enough autonomy. He regrets that he didn’t trust his gut that satellite operations can’t just be knockoffs of the mothership. That can work for a while, but eventually restaurants need to be living, breathing organisms, not museum pieces.

So last November Chang brought in another chef with local roots, Tae Strain, who grew up in Clarksville, to blow things up and start over. As Chang put it: “I was like, ‘Tae, I want you to fuck it up. I want you to find out what you can do. DC is more sophisticated in its palate, more worldly in its cuisine than the rest of the nation, and they deserve a world class chef.”

Strain took that directive seriously. He fucked it up good. The signature buns and ramen are off the dinner menu completely (go for lunch if you have a craving). You’ll never miss them. Strain has replaced them with some of the most vibrant, interesting dishes in town. Let me show you around Momofuku 2.0. 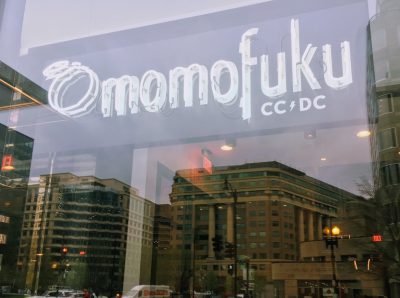 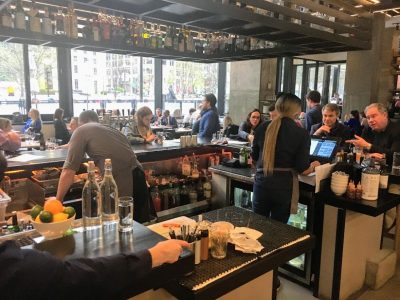 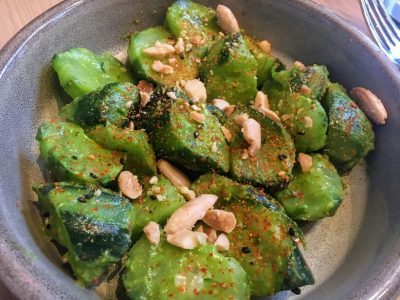 These cucumbers may be the only surviving dish from the old Momofuku menu. And thank goodness for that. They are the perfect foil for the rest of the menu, new or old. The cukes are smashed into craggy chunks and then salted and chilled to achieve terrific crunch and texture. 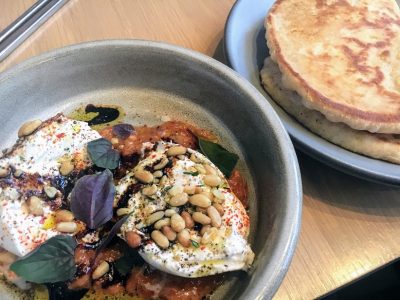 There’s a whole section of the menu devoted to the Chinese flatbread called “Bing,” which I’d never heard of but felt familiar the instant it hit the table. Tear off a piece of the flatbread and scoop up some of the dip/spread/topping of your choice, from pimento cheese to roasted oysters to the lovely burrata with rhubarb here. This burrata could be a dish at Maydan or Arroz and you wouldn’t blink an eye. 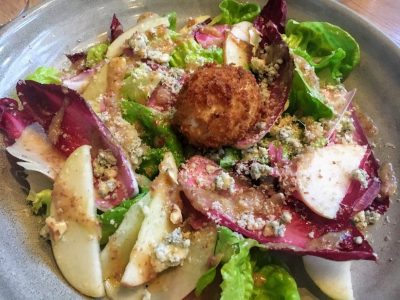 Lots of flavors in this refreshing salad that all work together, from the Waldorf-like (or haroset-like) apple-walnut combination to the breakfast-y overtones of the bacon vinaigrette and runny egg.

ps — don’t be put off by the idea of a “chicory” salad, which I associate with the chicory coffee served at Cafe Du Monde in New Orleans. Apparently radicchio is just another name for red chicory, so there’s nothing particularly challenging going on here other than having to deal with a sudden craving for beignets. 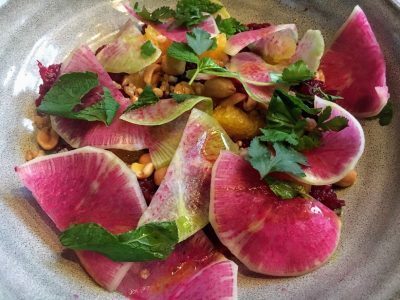 Another lovely dish of contrasts, with the sweet softness of cooked red beets (you can see them peeking out underneath) playing off against the tart dressing, the crispy rice and the raw Chioggias strewn on top. 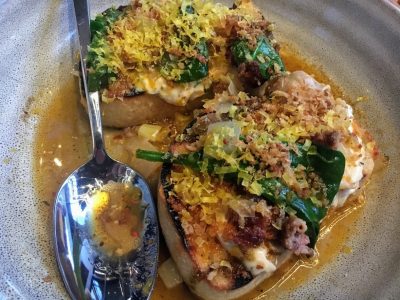 A first-rate example of the great DC toast boom of 2018. Clams and Sichuan sausage provide the spine but what makes this toast different is the Bouillabaisse-like vibe. The toast sits in a pool of broth that soaks into the toast while the mayo provides a rouille-like creaminess. It all fuses together into an irresistible stew-like concoction. 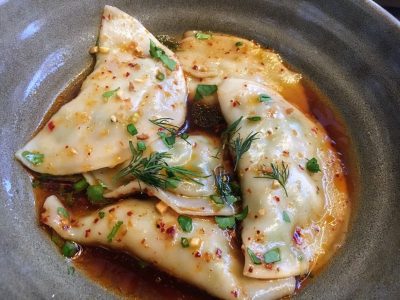 Good, fresh filling helps these dumplings go down easily — if not quite as interestingly — as the other starters. 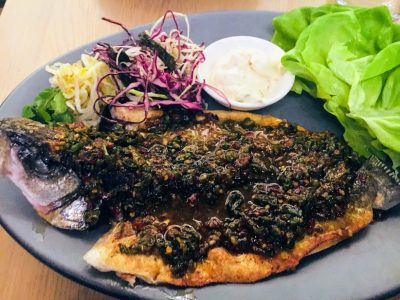 A winning dish that separates itself from the other 4,539 branzinos in town with its luscious herb sludge and lettuce for wrapping and eating with your hands. 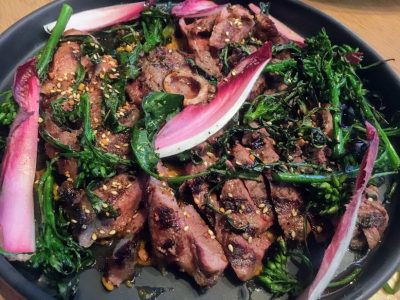 Not a bad dish but slightly disappointing because it read so well on the menu. Sort of the opposite of the chicory salad which sounded sketchy but turned out to be a pleasant surprise. I think that’s why so many restaurants have minimal menu descriptions even if the preparations are more elaborate — better to under-promise and over-deliver than the opposite. 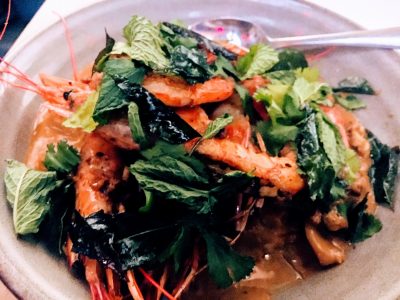 Delicious Asian take on shrimp and grits. Truth be told, I ordered this mostly because I always order XO sauce any chance I get. If someday I’m accused of eating baby seal, my excuse will be that I saw XO sauce on the menu and didn’t read beyond that. Unfortunately, this curry is not on the current dinner menu but hopefully will make a return. 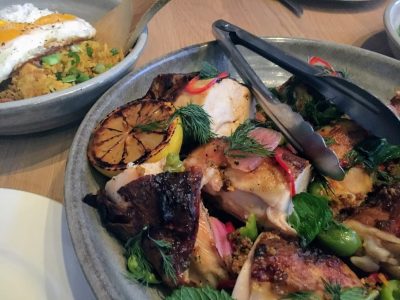 This moist and well-seasoned bird is one of several “for the table” offerings. The fried rice could be a bit more interesting, but chop up the fried eggs and add some of the accompanying cilantro yogurt and hot sauce and you have a side-dish worthy of the chicken. 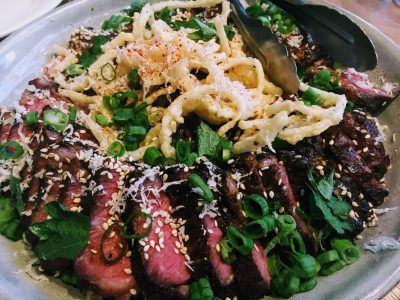 Excellent steak, tender and well-cooked. Use your knife and fork or take the saam approach and wrap some meat, rice and condiments in lettuce and eat with your hands. 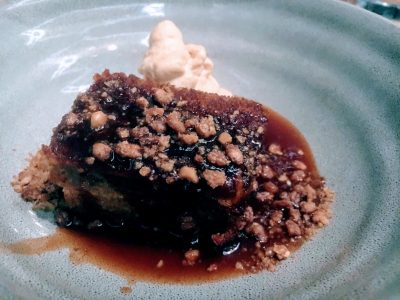 Not bad but not in the same league as the better sticky toffee puddings in town like Convivial’s. 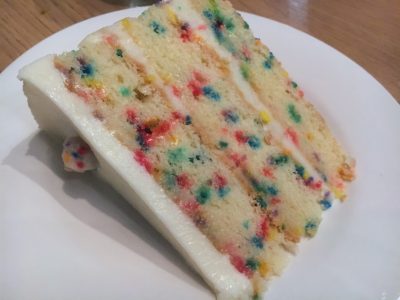 I know this is heresy but I just don’t get Milkbar. It always seems like there’s a line of millennials crammed into the Milkbar take-out area and I wonder what they could possibly be queuing for. I’ve never had anything from Milkbar that I’d want to have again. The crack pie is heavy and dull. The cookies are terrible (the blueberry & cream may be one of the worst cookies of all time; it tastes like something the makers of Boo Berry cereal would have rejected for being too artificial tasting). The cereal milk soft serve is a cute idea that loses its charm after a few bites. And the birthday cake pictured here is ok at best.

Before I hear from my daughters about the truffles, let me give them that. The truffles aren’t bad. But that’s grading on a curve.

You could find a dozen things more delicious than any of the Milkbar offerings at Buttercream Bakeshop on 9th St across from the Convention Center. Go and thank me later.

I hope you’ll give Momofuku 2.0 a shot. The good news is that the crowds haven’t yet caught on to the upgrade and it’s still easy to get a reservation. And Chef Strain isn’t done blowing things up (if only he’d blow up Milkbar). This week, as reported by Eater, he’s launching a new outdoor patio with seafood pop-ups every Saturday and Sunday. The man himself, David Chang, will be on hand for the opening on Sunday April 29 from 1-4 pm. See you there. I’ll be in the mosh pit waving my arms ecstatically when Chang pops a cold one.

3 Responses to You Don’t Know Momofuku